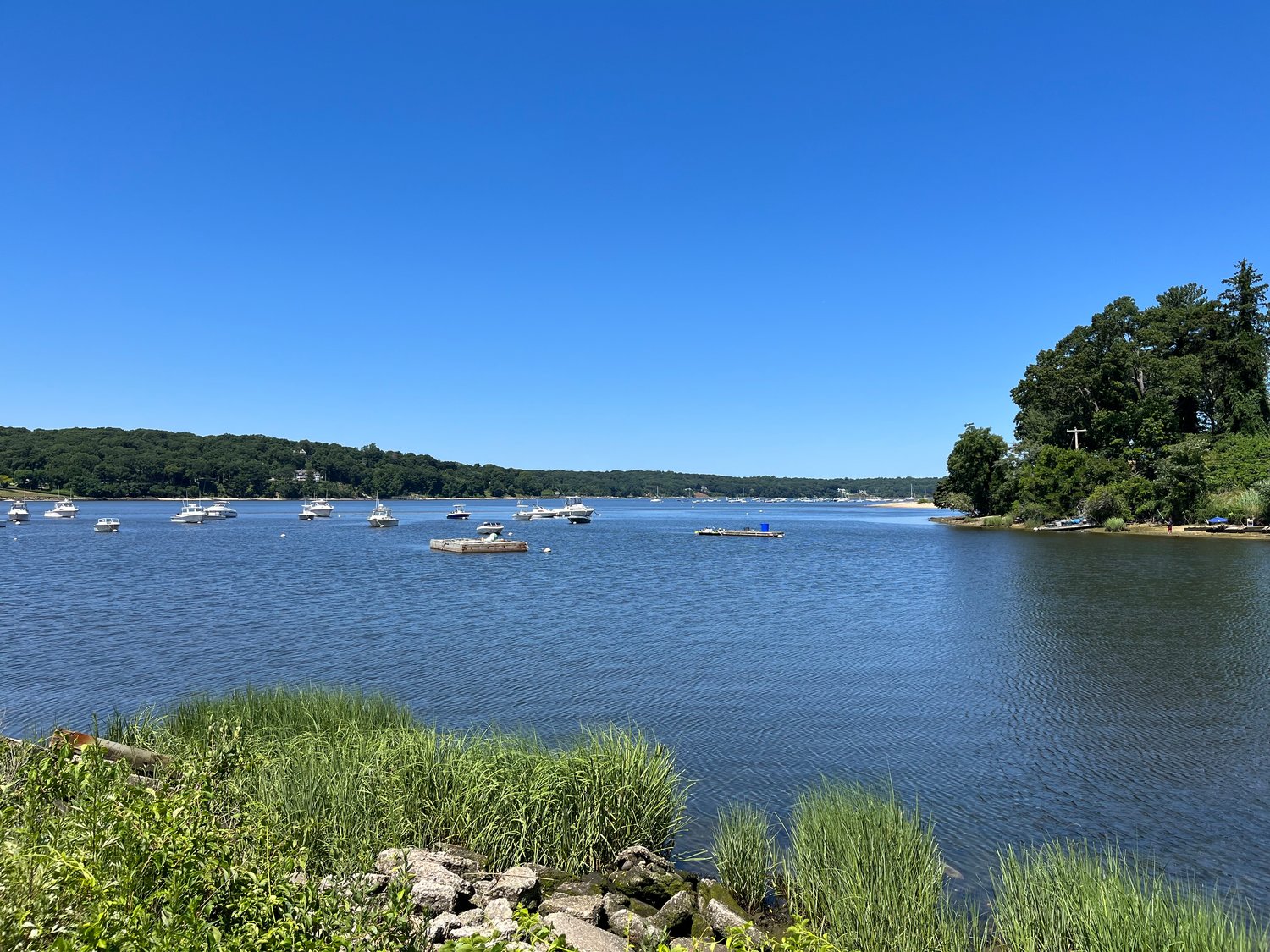 Local waterways, like Cold Spring Harbor, can be susceptible to outbreaks of harmful algal blooms — more commonly known as ‘red tides’ — during the summer months.
Will Sheeline/Herald 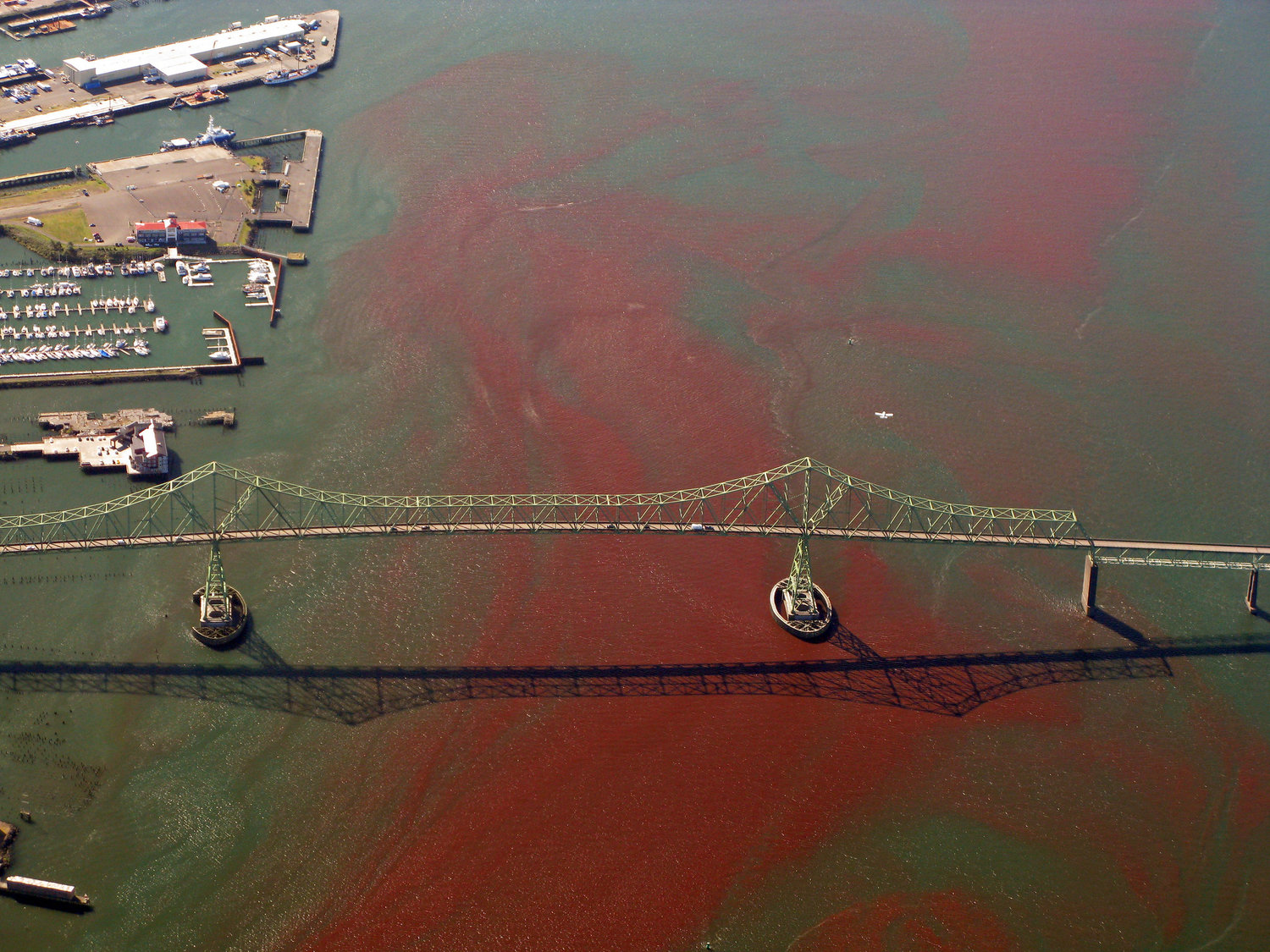 Harmful algal blooms — more commonly known as ‘red tide,’ like this created under the Astoria Bridge in Oregon in 2008 — can cause a number of ecological issues, from killing nearby marine life to creating problems for swimmers.
Courtesy Alex Derr
Previous Next

Alarge algal bloom can have detrimental effects on the ecosystem, whether it’s considered ‘harmful’ or not.”
Peter Linderoth, director of water quality, Save the Sound

The summer season is well underway, and with it comes sun, heat, visits to the beach, and harmful algal blooms.
These blooms, more commonly referred to as “red tide,” are caused by the unchecked growth of certain types of algae, according to scientists, which can poison sea life and prove debilitating — in some cases even fatal — to people, as well.
Blooms are created when algae colonies clump together and grow out of control, usually fueled by a large amount of nitrogen in the water, causing the algae population to spike uncontrollably. Normally algae, a simple plant found in salt and freshwater, is harmless and actually provides an essential source of nutrients and energy for the aquatic ecosystem.
The blooms occur predominately during the summer, when the water is warmest and provides a fertile breeding ground. According to a University of Connecticut study, the Long Island Sound water temperature is rising roughly 33 degrees Fahrenheit per decade. That’s four times faster than the Atlantic Ocean, which also suffers from more of these harmful algal blooms.
A number of local conservation groups have made an effort to study and track the water quality and toxicity levels of Long Island Sound, especially when it comes to “red tide” blooms.


“We want some algae in the water since it’s necessary for a healthy Long Island Sound, environmentally speaking,” said Peter Linderoth, director of water quality for Save the Sound. “However, a large algal bloom can have detrimental effects on the ecosystem, whether it’s considered ‘harmful’ or not.”
The effects of these blooms can vary — in the best case, merely causing minor inconveniences to marine life. However, blooms can kill off a large number of invertebrates like shrimp and crabs, even dolphins and turtles. While people can still swim in such booms, they can suffer from skin irritation and stomach issues such as nausea and vomiting.
Many blooms are quite visible, so any public beach blooms are found will often be shut down before any swimmers are put at risk. Despite that, people living near the water are still at risk, as blooms can affect shellfish such as oysters, mussels and clams.
Luciana Santoferrara, a biology professor at Hofstra University, says that it’s this danger of ingesting contaminated shellfish which poses the greatest risk to people living near the water.
“Usually the problem for humans doesn’t come directly from contact with the water, but from contaminated seafood,” Santoferrara said. “The risk is related to specific toxins, as these microscopic organisms that can cause red tide produce toxins that can harm different parts of the body, from the liver to the brain.”
Yet, scientists say many of these blooms are ultimately man-made, and largely preventable. High nitrogen levels in the water are often caused by runoff from human waste and produce infecting water ways along Long Island, ultimately making their way to the sound.
This extra nitrogen typically comes from poorly maintained septic systems and cesspools, which leak into the soil and corrupt rivers and other waterways that feed the sound, scientists have said. Fertilizer runoff is another major issue, exacerbated by what are otherwise picturesque golf courses near the water, that typically require thousands of tons of fertilizer.
But with just a little effort, Long Island could easily identify — and maybe even eliminate — some of these environmental threats. At least according to Michelle Lapinel McAllister, programs director and environmental monitor for the Coalition to Save Hempstead Harbor. Understanding what causes nitrogen buildups, and implementing methods of prevention can go a long way in protecting not only swimmers and shellfish-eaters, but also the sound itself.
“Any efforts to reduce nitrogen help,” McAllister said, “from maintaining septic systems and cesspools so that they’re not leaking into the ground and making their way into the water ways, reducing or eliminating fertilizer use, picking up after your pet after they go to the bathroom outside, (and) upgrading treatment plants.
“Any of those are going to be a benefit to reducing nitrogen from entering the waterways.”
Report an inappropriate comment