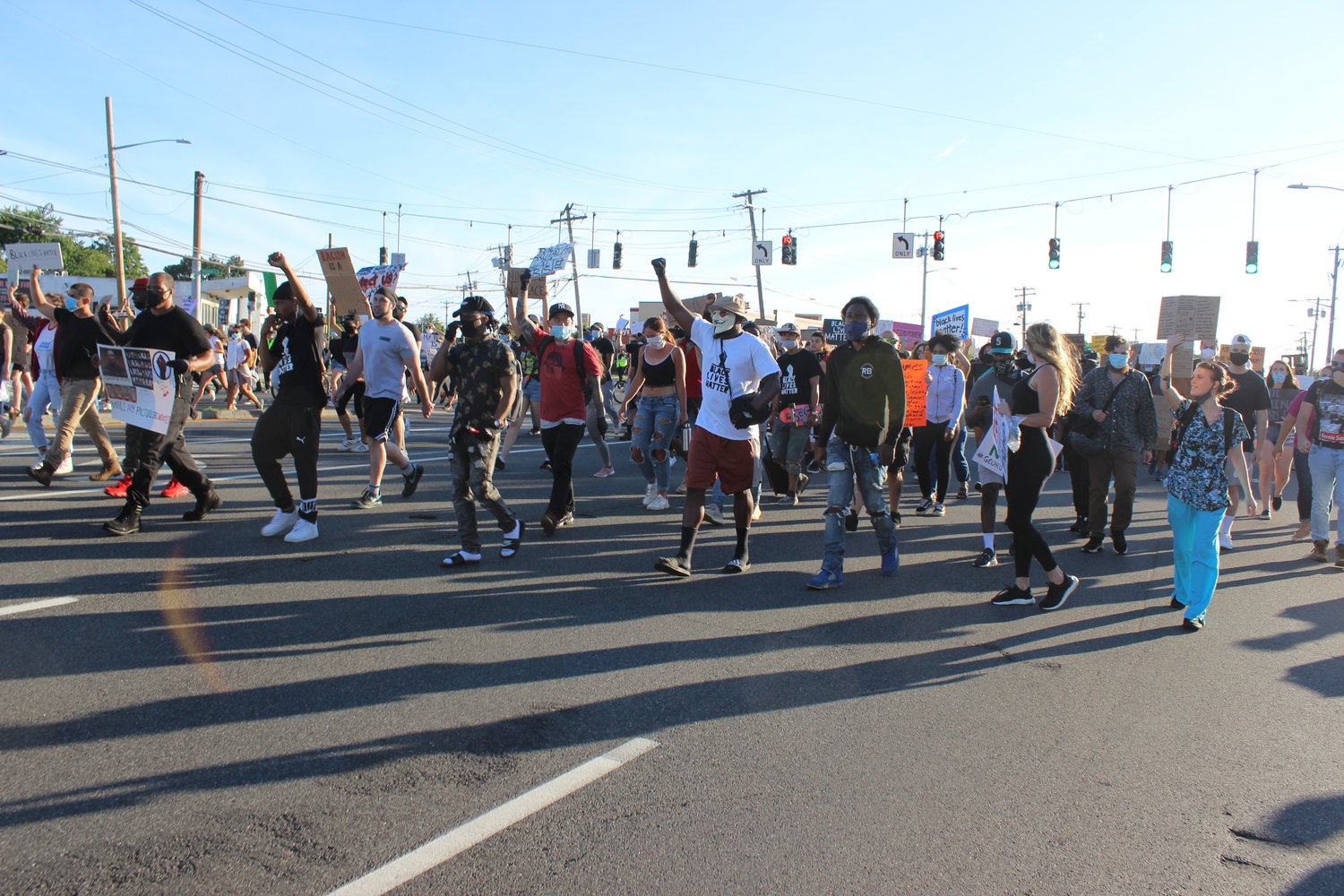 A Coram man plowed his SUV into a group of Black Lives Matter protesters marching on Broadway in Huntington Station on Monday night. The group has been protesting across Long Island every day for the past month, including in East Meadow, above.
BRIAN STIEGLITZ/HERALD
By Brian Stieglitz

A Coram man plowed his SUV into a group of Black Lives Matter protesters marching on Broadway in Huntington Station on Monday night, according to the Suffolk County Police Department. A 26-year-old East Meadow man was struck by the car and sustained damages to his wrist, arm and back.

Further investigation revealed that another protester lied about being hit, according to Suffolk police. He was arrested on July 8 and is being charged with a class "A" misdemeanor.

The driver Anthony Cambareri, 36, was charged with third-degree assault, but an arraignment date has not yet been set. Cambareri was not injured. The vehicle, a 2018 Toyota RAV4, was impounded for a safety check.

In a Facebook post following the incident, Bennett wrote that the driver sped up when he saw the protesters. A number of them fled, but he and some others stood in place, hoping the driver would slow down or brake before hitting them.

Cambareri continued to drive after striking Bennett, who lay injured in a puddle on the side of the street. He added in his post that the other protesters chased the car down before police arrived.

“This man tried to kill people with his car, and is not and will not be serving any time, because they charged him a . . . misdemeanor,” Bennett wrote on Facebook. “He easily could have been charged with a B or C felony had the arresting officers chose to charge him with vehicular assault, assault in the first or second, assault with a deadly weapon, or attempted murder. And fleeing the scene of a crime.”

Two days earlier, a man had driven through a group of Black Lives Matter protesters marching along a closed Seattle freeway and killed 24-year-old Summer Taylor. The driver, Dawit Kelete, also severely injured Diaz Love, 32, of Portland, Ore. A judge found probable cause for two counts of vehicular manslaughter, according to court documents.

On July 1, Nassau County Executive Laura Curran released a set of requirements for protesters to follow. According to a statement about the guidelines, called the Free Speech Roadway Protection Protocol, they are “designed to protect residents’ right to peacefully and safely demonstrate, and ensure the safety of protestors and the general public.”

According to the requirements, protesters must not congregate in public streets or block traffic, and must not enter private property without the owner’s permission. Those who do not comply “may be subject to enforcement action,” the statement reads.

Demonstration organizers are required to identify their routes for the Nassau County Police Department’s Community Affairs Unit, at (516) 573-7360, within 24 hours of a protest.

Protesters are also required to cover their faces and noses with masks or cloth barriers when they are within six feet of one another.

The day the protocols were released, the NCPD arrested three protesters for not abiding by them, according to Detective Lt. Richard LeBrun, the department’s spokesman. Among the three were Bennett and Michael Motamedian, also of East Meadow, who were taking part in a protest in Roslyn.

“They are targeting protesters and trying to send a message,” Bennett wrote on Facebook.

Both were visited at their homes by county police two days later, and held overnight for outstanding warrants related to previous arrests, according to officials. Last Saturday morning, the two were released from NCPD headquarters in Mineola and greeted by a group of protesters gathered outside in solidarity.