The ballad of Mickey Tussler 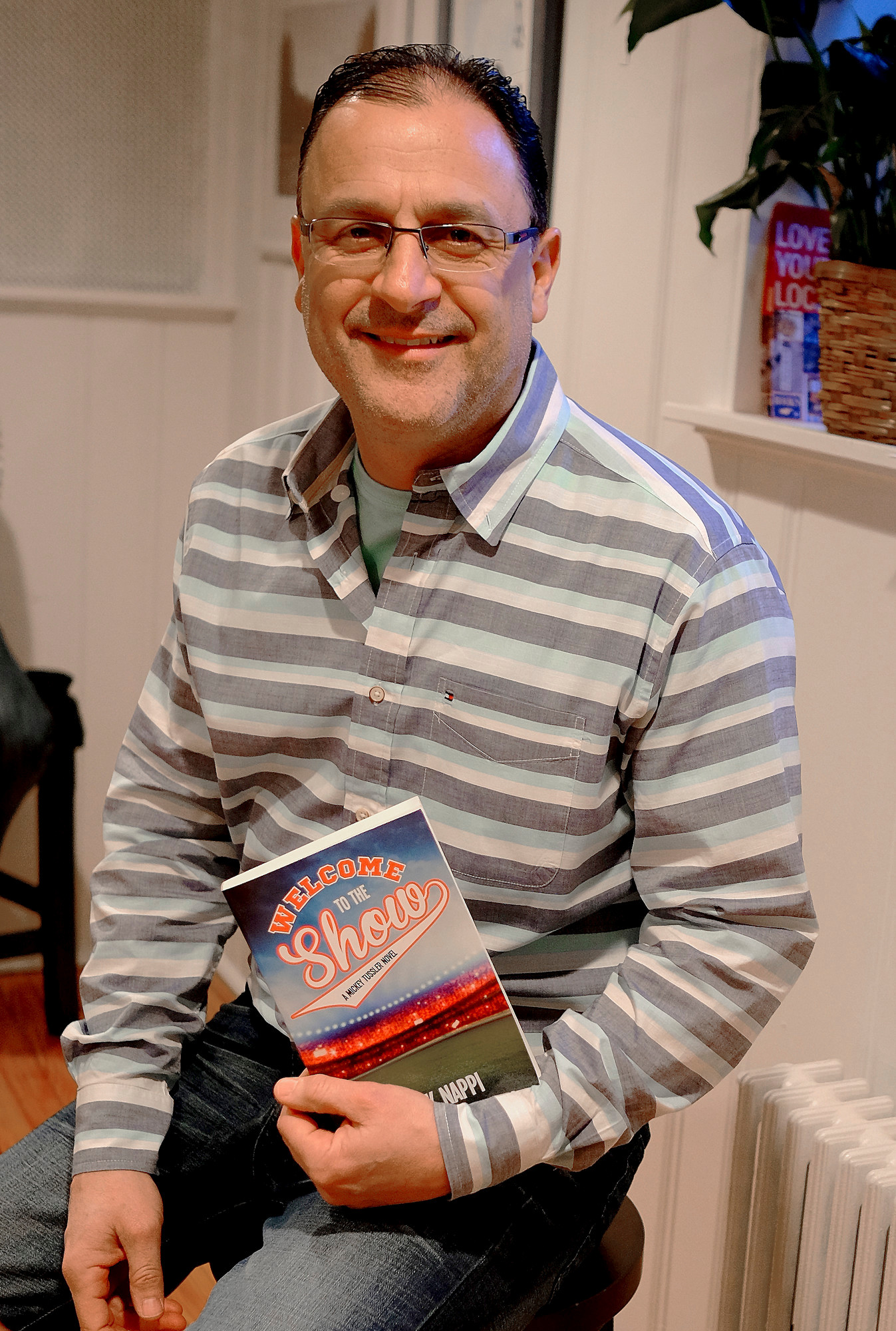 Frank Nappi with his third book in his Mickey Tussler series, “Welcome to the Show,” at Turn of the Corkscrew in April 2016.
Courtesy Oceanside Schools 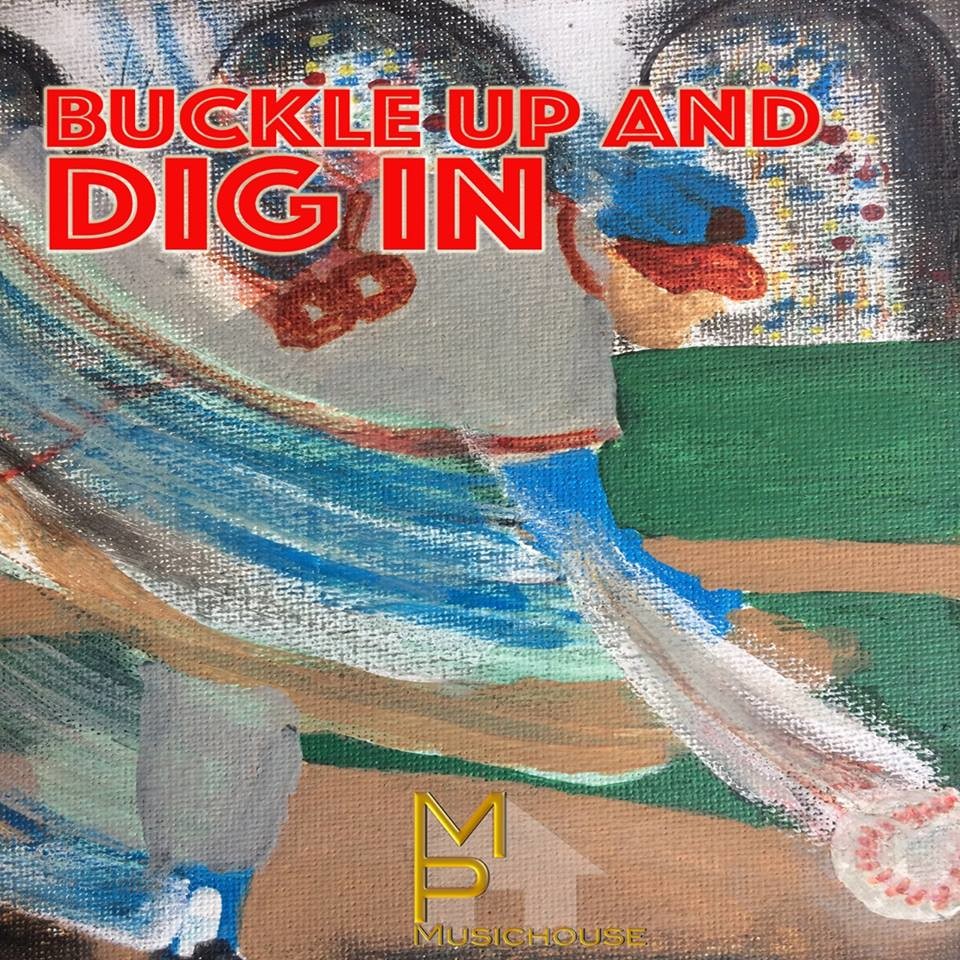 The track art for “Buckle Up and Dig In,” a country music song based on OHS literature teacher Frank Nappi’s novel series about an autistic major league baseball player.
Courtesy MP Music House
Previous Next
By Zach Gottehrer-Cohen

After Frank Nappi, an Oceanside High School literature teacher for 29 years, wrote “The Legend of Mickey Tussler,” a novel set in the late 1940s, about an autistic farm boy with a strong pitching arm who makes it to the major leagues, people asked Nappi about a sequel. “I told them, ‘Eh, I’m not sure,’” he said, “but then there was the second one.” After that, there was a third and, before long, a TV movie. Now a song is in the works.

On Sept. 15, MP Music House will release a country music tune based on Nappi’s series. The track, called “Buckle Up and Dig In,” came about after Frank and his wife, Julia, also an OHS teacher, ran through their Massapequa neighborhood one day.

They stopped to talk to their neighbor Tom Petrone, a co-president at MP Music House, a songwriting and music publishing business. When he learned about the Mickey Tussler series, he told Nappi he wanted to turn it into a single.

Petrone said he was drawn to the success of Nappi’s books.

MP Music House provided the Herald with a pre-release copy of the song, and the track’s emotional country vocals tell the Mickey Tussler story with guitar flourishes that evoke well-known country-rock acts like the Eagles and Neil Young. The song is catchy, and this reporter has struggled to get it out of his head since first hearing it.

Nappi said he thinks the story works well as a country song. “The kid starts off on a farm somewhere, with meager beginnings… A little bit of baseball in there helps, too,” he said. Petrone explained that he had a number of classic baseball songs in mind when he wrote “Buckle Up and Dig In,” including Credence Clearwater Revival’s “Centerfield.”

Beyond baseball, Nappi said that his story embodies a wholesomeness that country music often espouses. “Autistic people are amazingly pure of heart,” he said. “There’s no pretention at all, they just are who they are.”

“They wanted it to be upbeat,” he said of the song’s producers. “They said they didn’t want it to be this woe-is-me type thing.”

The feedback Nappi received from the autism community about his novels was overwhelmingly positive, with many saying that it was rare to find stories about autistic people who succeed rather than just survive the challenges of their condition.

Nappi said his experiences at OHS, particularly with the Best Buddies program — a club pairing high schoolers with special-needs peers — had helped him develop his Mickey Tussler books. He recalled the stories of one student he knew who could spin a ball on his finger for hours — “better than the [Harlem] Globetrotters,” he said.

Nappi added that sports could be a natural avenue for autistic people to succeed, given that they often have immense capacities for focus and repetition, which essentially constitutes practice. Most of their struggles involve social interaction, he said.

In a speech he gave at an OHS Hall of Fame ceremony, he responded to someone who called his book implausible because the critic didn’t think an autistic person could play at the professional level.

“I totally disagree,” he responded. “I believe at some point you will see someone announce that they’re on the spectrum, and you would never know, unless you sat with them long enough in a social situation. But if you saw the person play, you’d never know if they had a difficulty.”

Nappi said that as a writing teacher, he often tells his students to “let the characters take you where they want to go.”

He added, “When I wrote the first book, I never imagined that this is where Mickey would go.”

Nappi’s roles as teacher and writer often feed each other. “I’ve been leading the double life for about 15 years,” he said. “Being good at one makes you better at the other. It works both ways.”

As a teacher, he said, “You get instant credibility when your kids find out that you’ve written something that’s been published.

“When I teach about the nuances of writing,” he added, “it’s easy because I can refer to what I’ve done, and they can see, ‘Oh, he did that and it works.’ It’s changed the dynamic in my classroom.”

For his next work, Nappi said, he’s working on a prequel to his Mickey Tussler series, at the suggestion of someone at Disney, who said they might be interested in adapting it.