The E.M. mural is truly a 'pizza' work 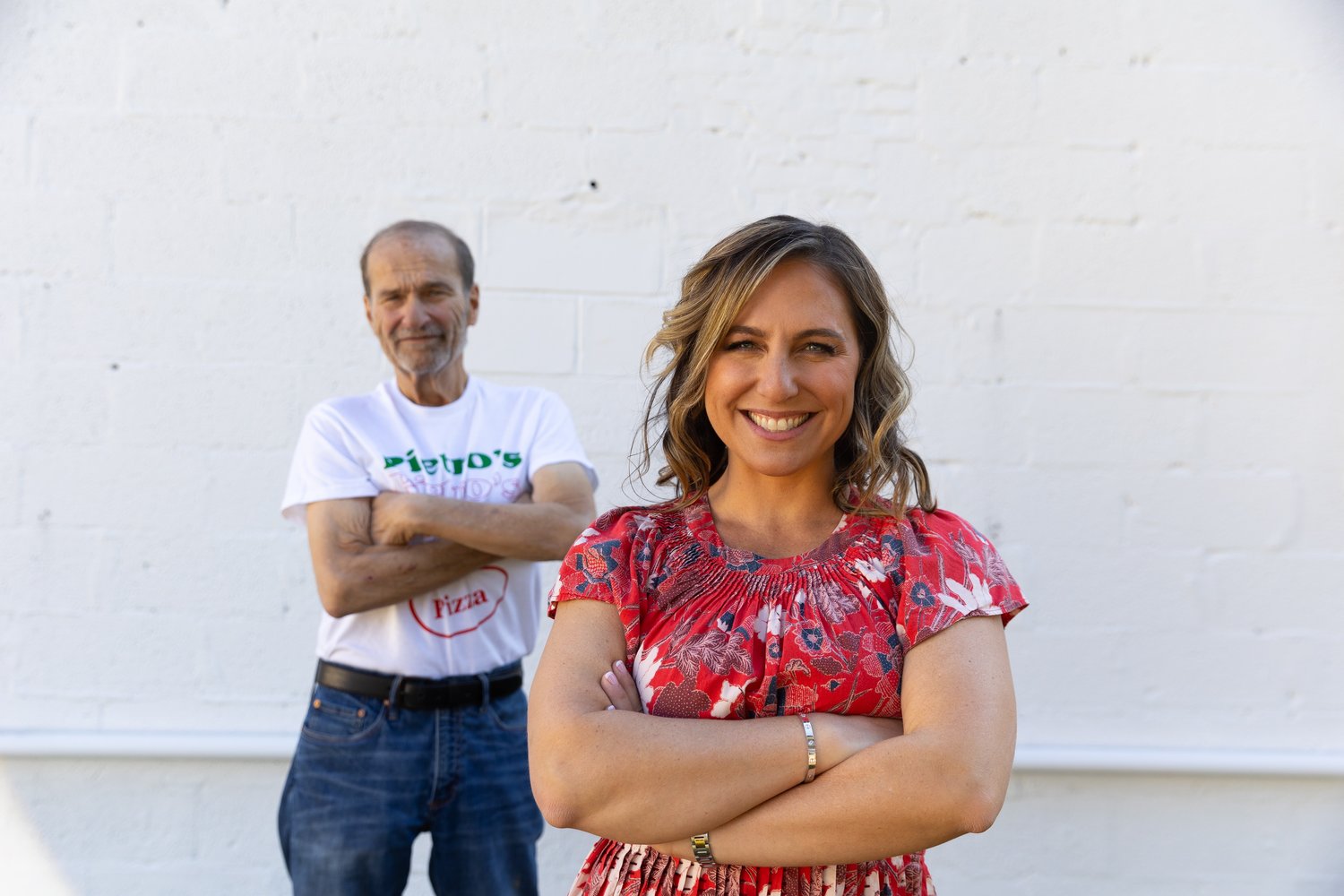 Lauren Maslov, right and her father John Arigo, left, stand in front of the wall before it was painted.
Courtesy Lauren Maslov 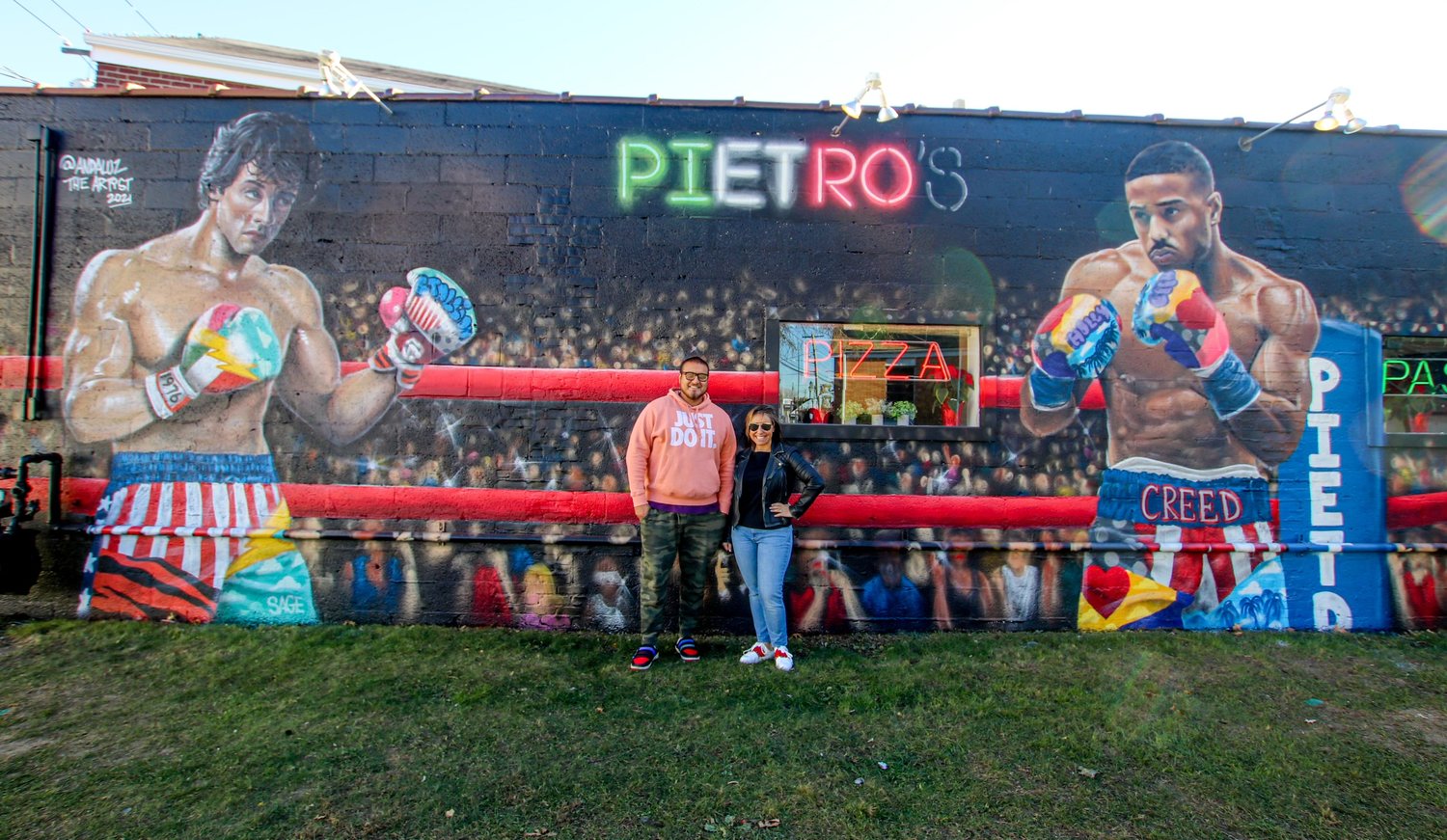 Andaluz the Artist, left and Lauren stand in front on the mural that was finished on Nov. 21, the 45th anniversary of the movie “Rocky.”
Courtesy Lauren Maslov 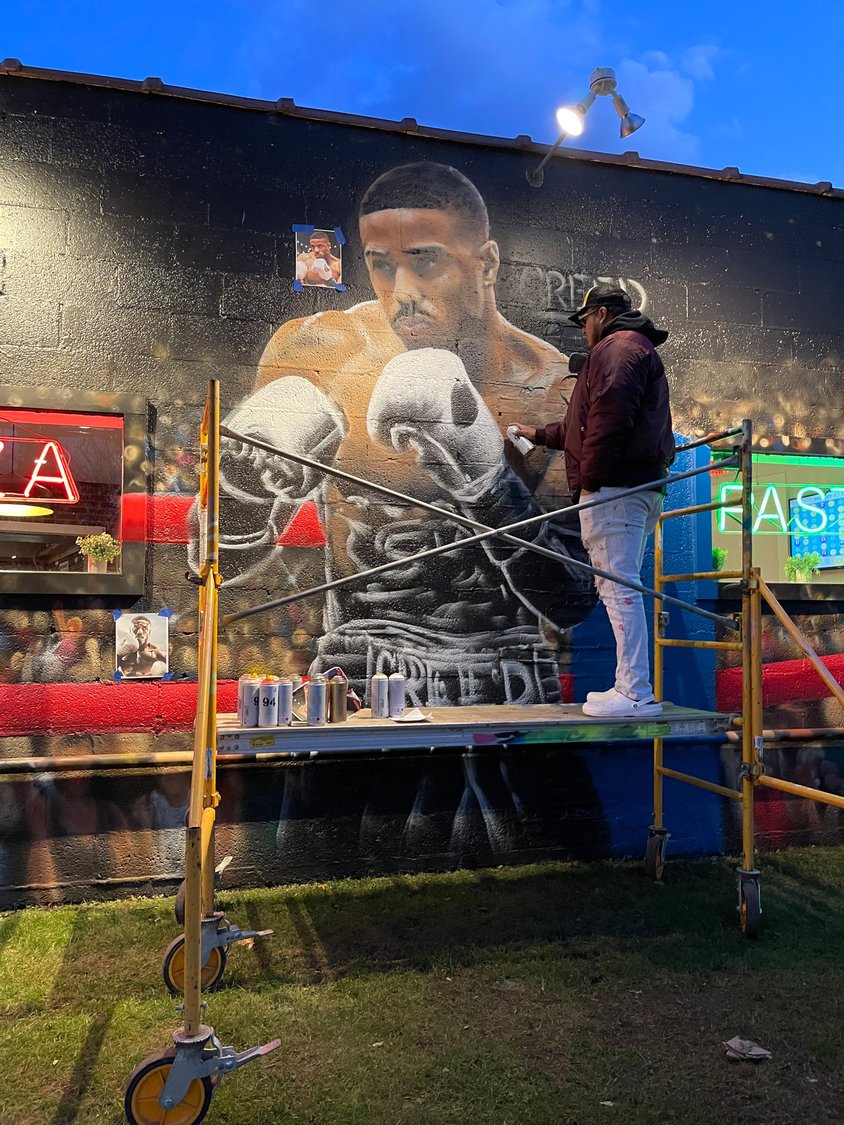 Street artist Efren Andaluz said his mural, “The Passing of the Torch,” at Pietro’s Pizzeria on East Meadow Avenue in East Meadow, is a tribute to the “Rocky” movies, with a twist — Rocky is in the ring with his protégé, Adonis Creed.
Courtesy Efren Andaluz
Previous Next
By Mallory Wilson

A beloved East Meadow pizzeria has a new look: a striking mural of Rocky Balboa and Adonis Creed. The giant art display is outside Pietro’s Pizzeria on East Meadow Avenue.

Pietro’s, owned by Lauren and her husband Andy Maslov, has always been a family owned eatery. Lauren bought the restaurant from her parents, John and Carol Arigo in August. They had  bought it from Carol’s parents, Peter and Nancy Ippolito in 2000, the original Pietro. The pizzeria originally opened in 1976.

When Lauren and Andy heard Andaluz’s suggestion that he paint a mural of Rocky they asked him why. But then, they discovered that Rocky and Pietro’s had some similarities.

“[The character] Rocky was of Italian heritage,” Andaluz said. “And then I found out that the movie “Rocky” came out the same year that the restaurant opened.”

Andaluz said he always wanted to paint a mural of Rocky and recommended that the Maslovs avoid typical pizza landscape art. He also mentioned that he likes his murals to have a storyline.

“Just because to me, I’m a street artist not a landscape artist,” Andaluz explained. “I’ll do it, but I’d rather do something that draws traffic.”

Andaluz said he always loved Rocky’s story, how the character came from meager means and worked hard to become a champion, one of the best in his field.

“When Lauren approached me and said she was going to put a mural on the wall I told her that it wouldn’t be a bad idea,” Arigo said. “And when I saw it completed, I was completely in awe and couldn’t believe how nice it came out.”

Lauren, who left her career in property management at 5PointzLIC to take over the restaurant, was inspired by the buildings where she worked, which were covered in murals.

“I kept seeing all of the street art and thinking, ‘Oh wow, my dad has a restaurant with a blank wall and we could really do something with that,’” she said. “That was before I even owned the restaurant.”

Arigo said that they had wanted to put something on the side of the building but never went through with it.

A friend of Lauren referred her to Andaluz and they met in June.

The mural, which is called the “Passing of the torch mural,” is a tribute to the “Rocky” movies in general, Andaluz said. The inspiration for the title came from Pietro’s being a third-generation owned restaurant. The mural features Rocky, played by Sylvester Stallone in the 1976 film “Rocky,” in the ring with his protégé, Adonis Creed, played by Michael B. Jordan in the 2015 movie “Creed.”

“I thought it would be cool if I had them playing against each other, kind of like a passing of the torch,” Andaluz said. “...I wanted to make it something full circle.”

It took roughly a week for Andaluz to complete the mural.

To make the connection between the mural and the pizzeria even stronger, the completion date — Nov. 21, coincided with the 45th anniversary of when “Rocky” was first released. “It happened by accident,” Andaluz said. “It was an insane coincidence.”

“The timing was strange,” John Arigo, the former owner of Pietro’s, said. “They never timed it or anything, it just happened that way.”

Lauren said she was excited about the possibility of a “Rocky” mural from the get-go.

“Everyone loves “Rocky,” she said. “I wanted something people would look at and be inspired by. It’s an iconic movie. We wanted to connect the old and the new.”

Andy said he loves the story aspect of the entire mural and its connection to the restaurant.

“This is not a typical business, it’s a story,” he said. “We’re the whole inspiration of the old world meeting the new world.”

Andaluz, who grew up in Queens, has always been an artist, he said. When he purchased an airbrush in high school and started making tee-shirts for his peers he decided to run with the idea. It was in 2016, that he became popular after creating the mural “151 Pokémon” on the side of his studio, located in a building in Huntington during the “Pokémon-Go” app craze.

“That went super viral and it was featured on every news station imaginable,” he said. “From there it changed my life and I started working more on murals.”

Andaluz has posted roughly 50 murals throughout the United States. In Huntington alone there are 12 of his murals.

Lauren said that customers are mesmerized but confused when they first see the mural. “Most people say it’s amazing but they always ask ‘Why?’” she said. “When they hear the story, they think it’s cool.”