The future is blowing in the wind 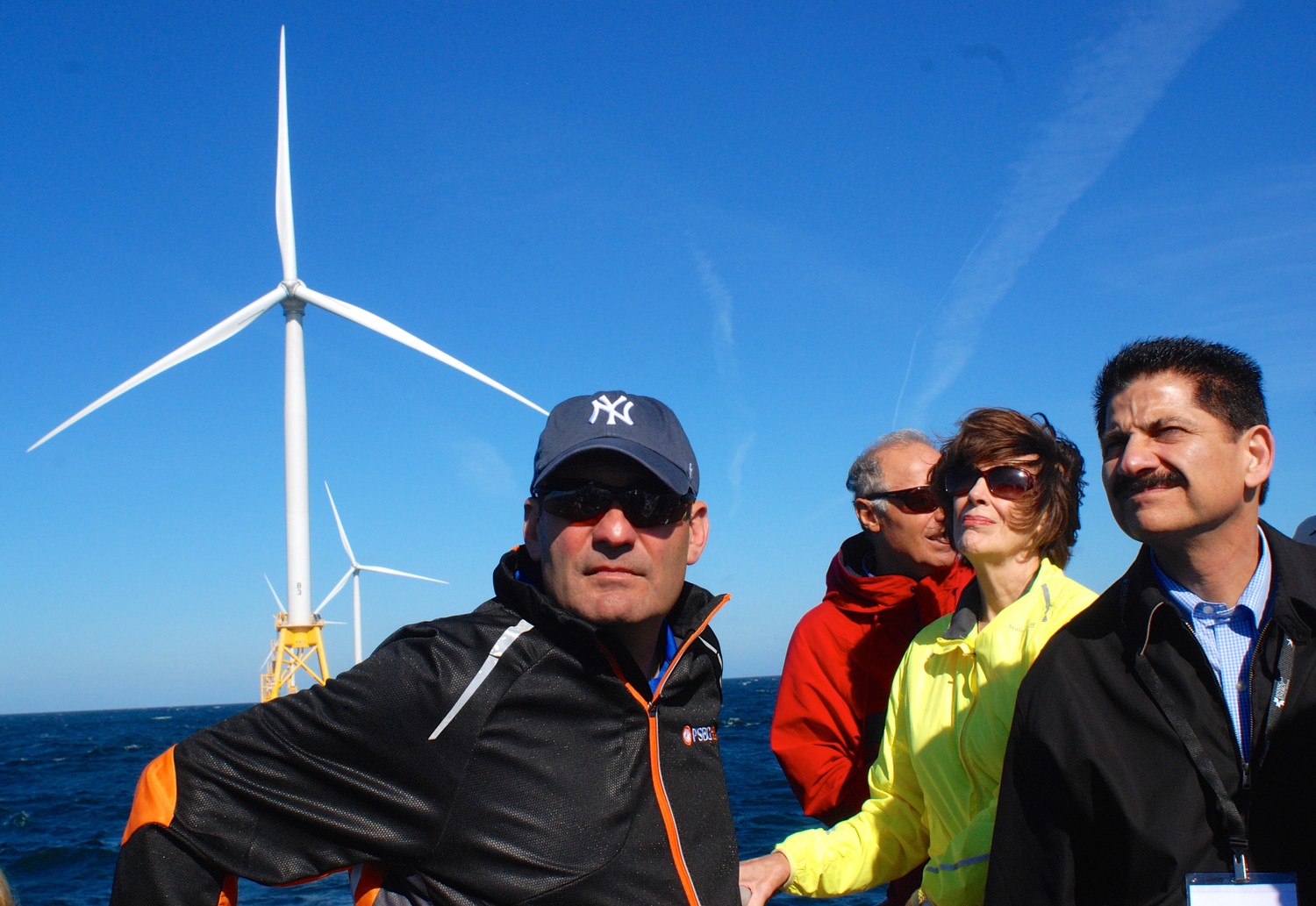 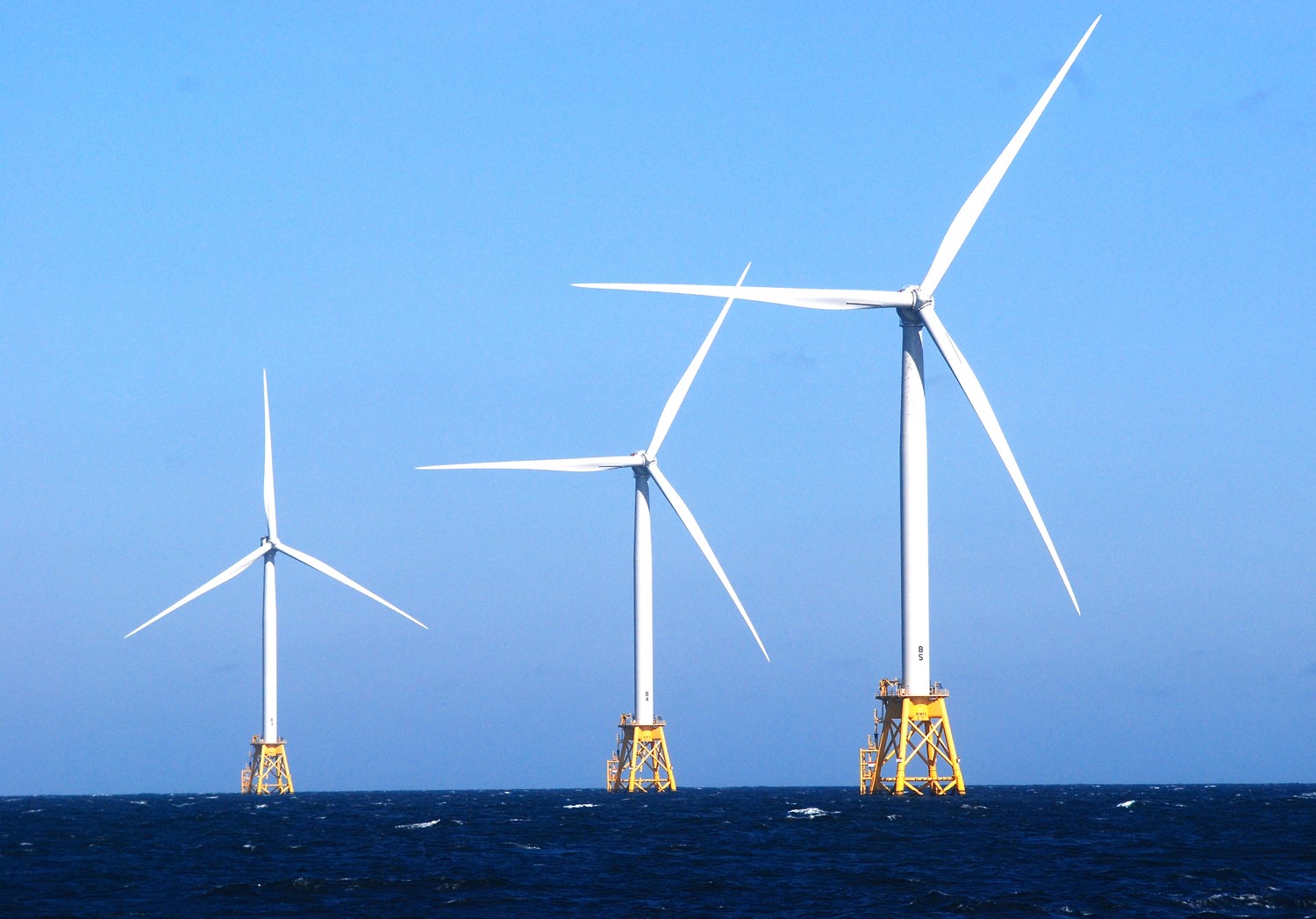 The windmills appeared majestic from a distance as the tour group approached.
Scott Brinton/Herald 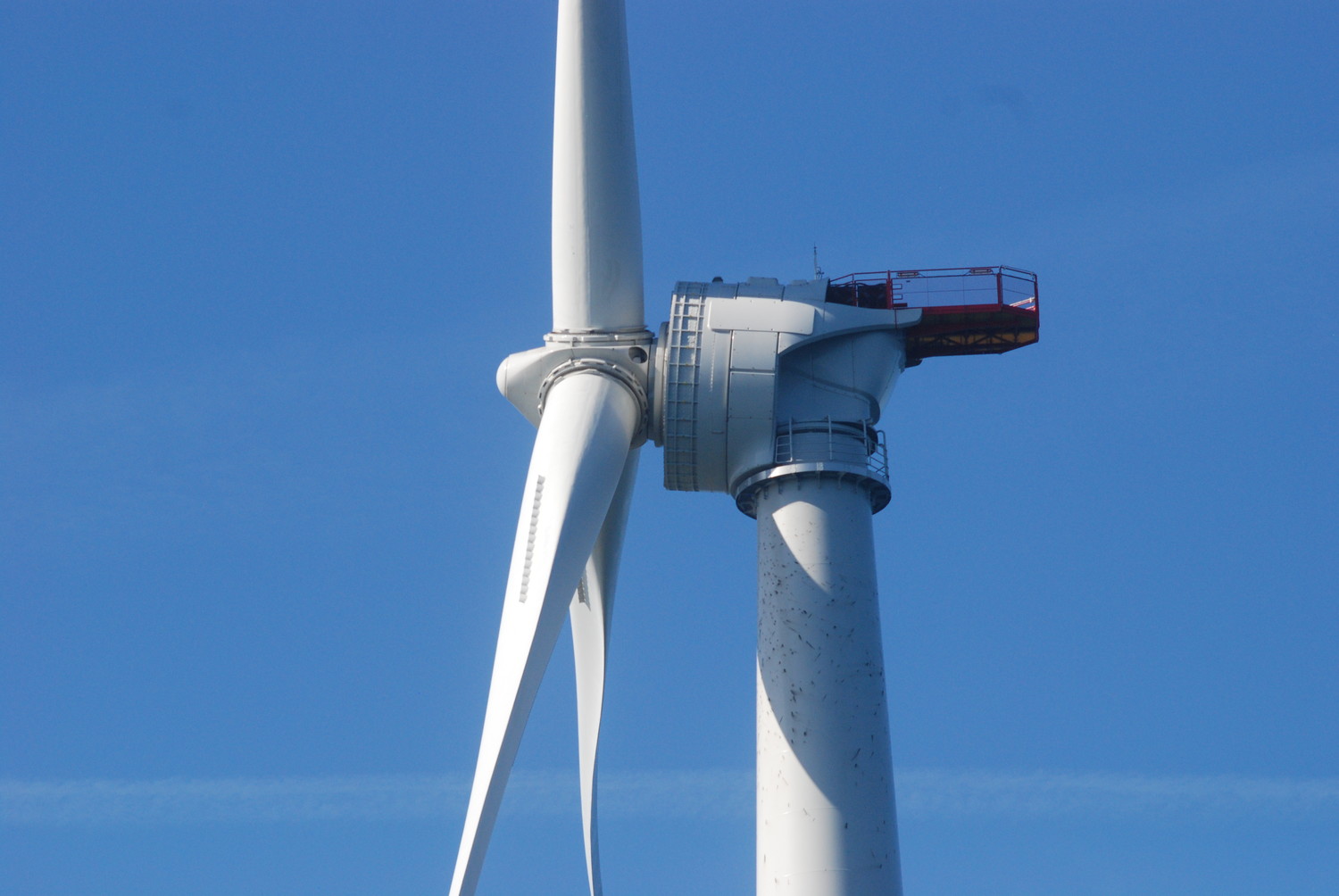 The turbines can spin the windmills' blades at more than 200 miles per hour, according to Deepwater Wind officials.
Scott Brinton/Herald 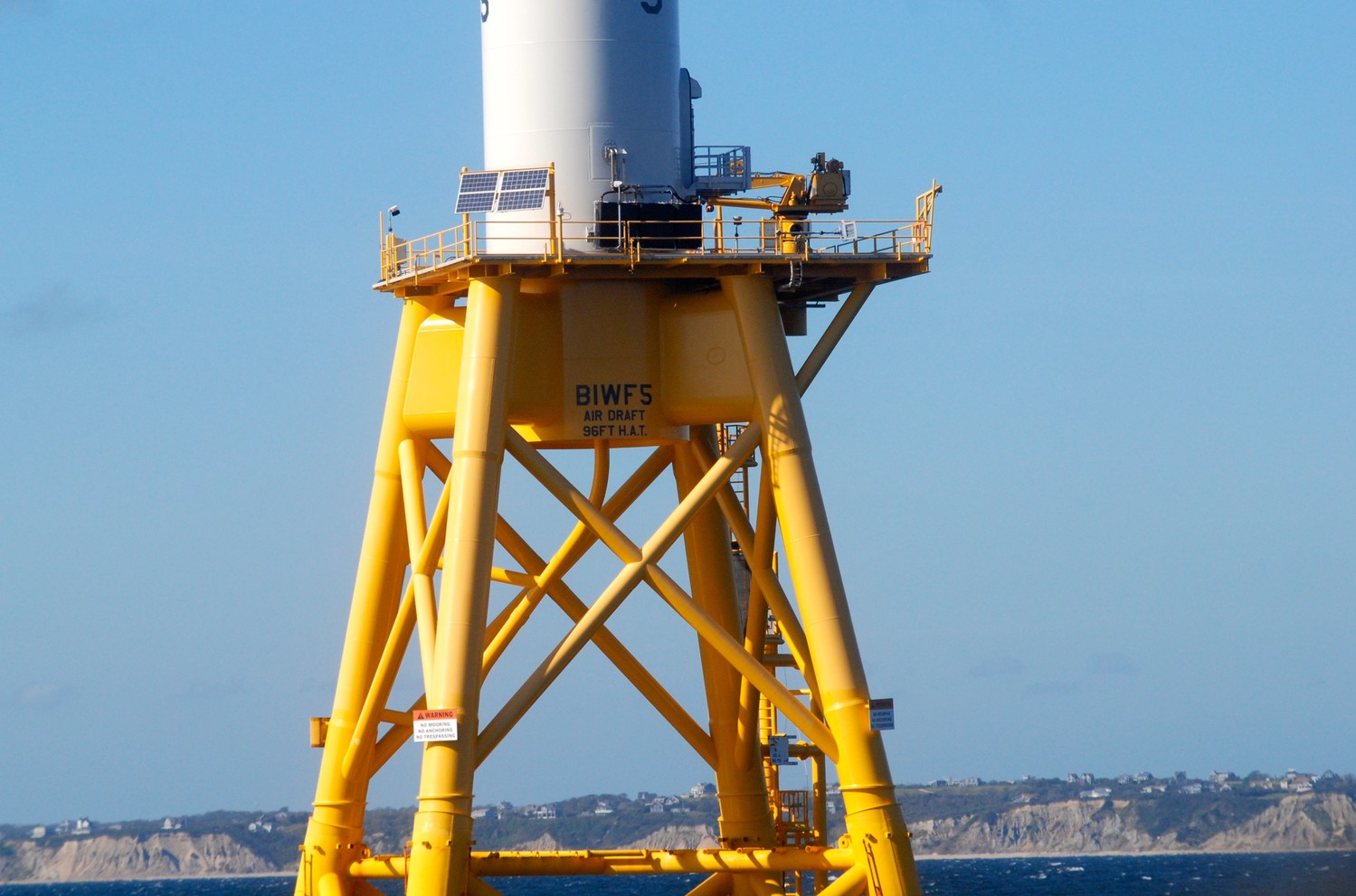 The windmills are supported by massive bases that reach 200 feet down to the bottom of the Atlantic Ocean. In the distance was Block Island.
Scott Brinton/Herald 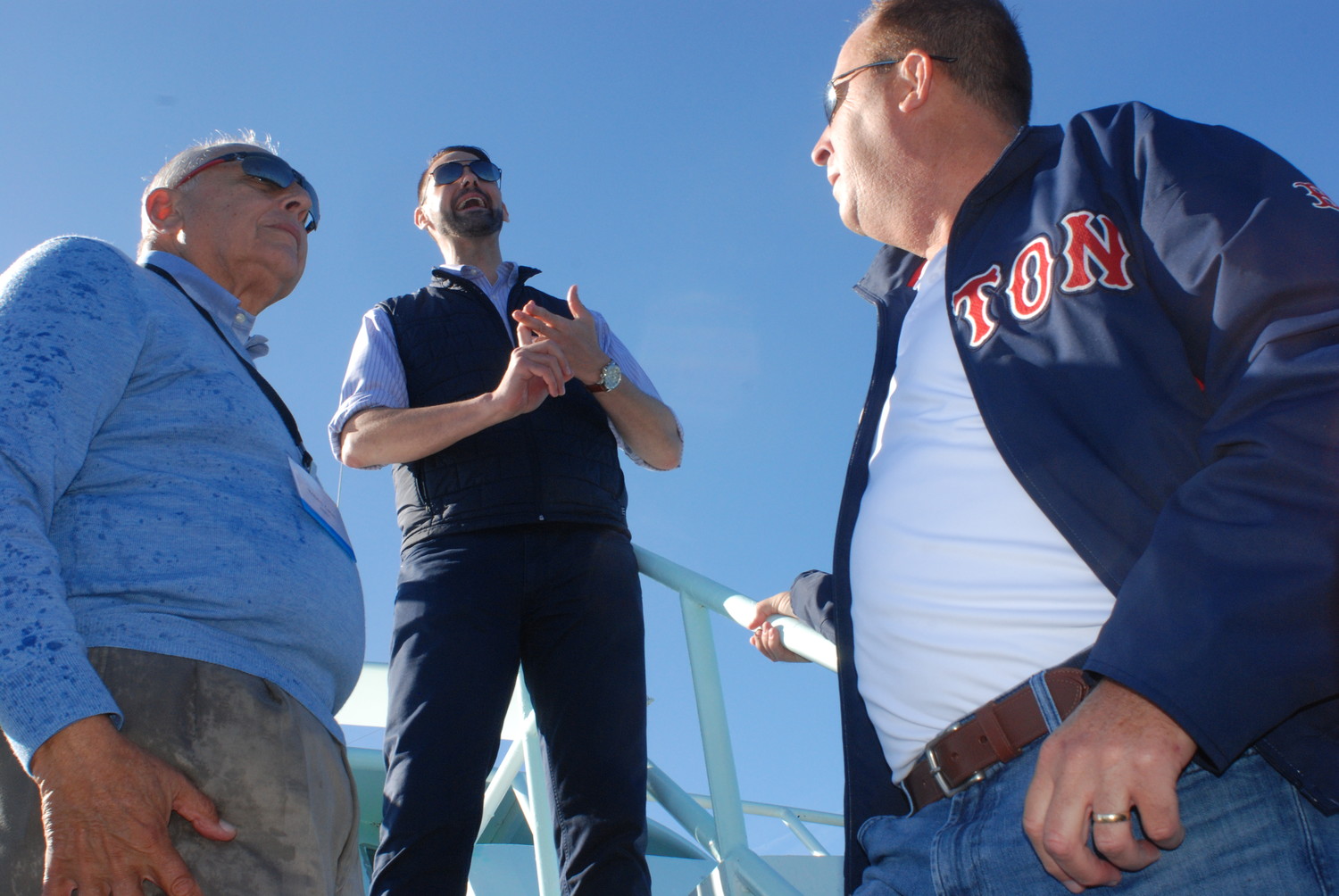 Speaking on the tour of the wind farm were Robert Catell, from left, chairman of the Stony Brook University Advanced Energy Research and Technology Center; Clinton Plummer, vice president of development for Deepwater Wind; and Kevin Law, president and CEO of the Long Island Association.
Scott Brinton/Herald 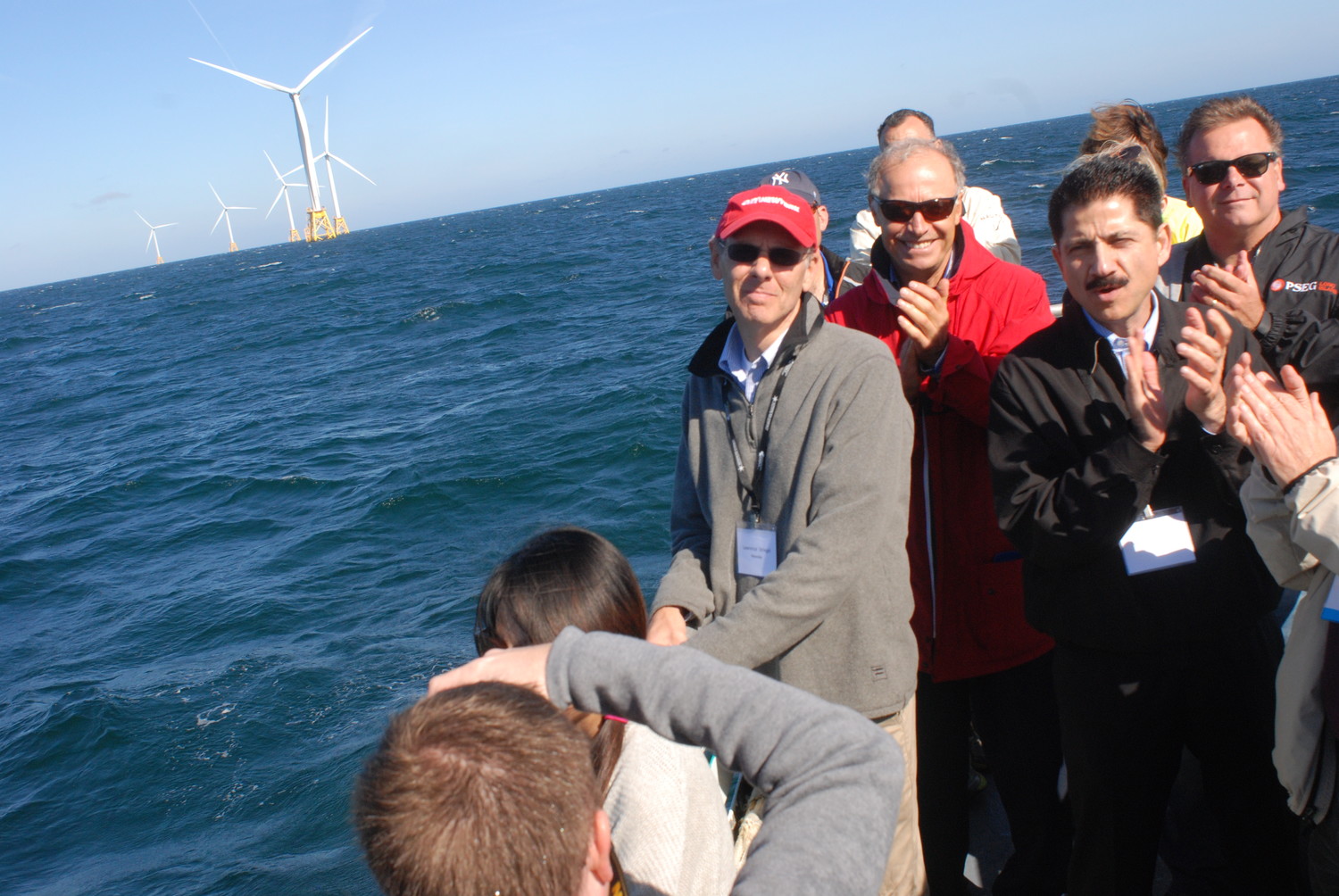 Tour participants posed for photos and selfies, with the windmills in the background.
Scott Brinton/Herald 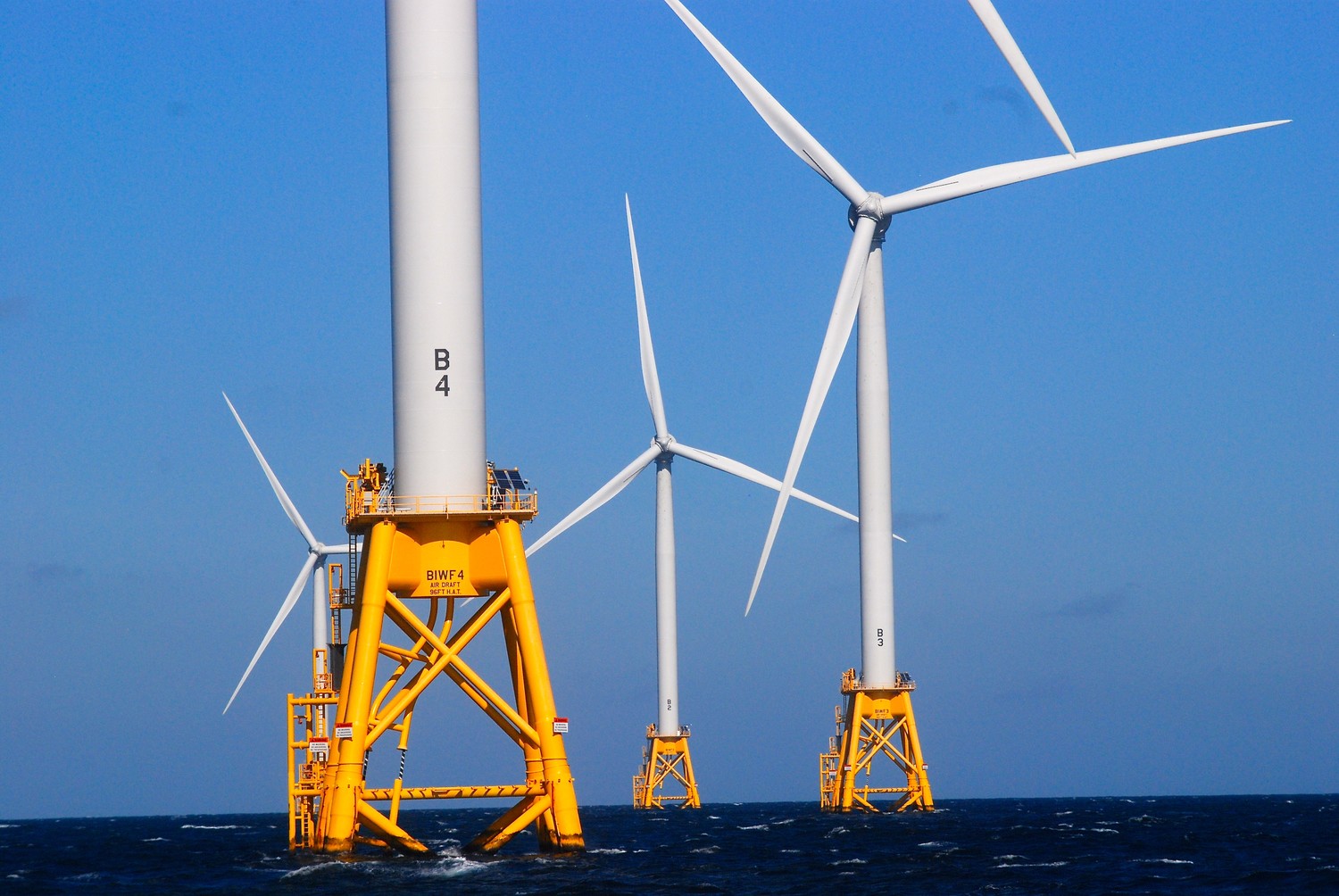 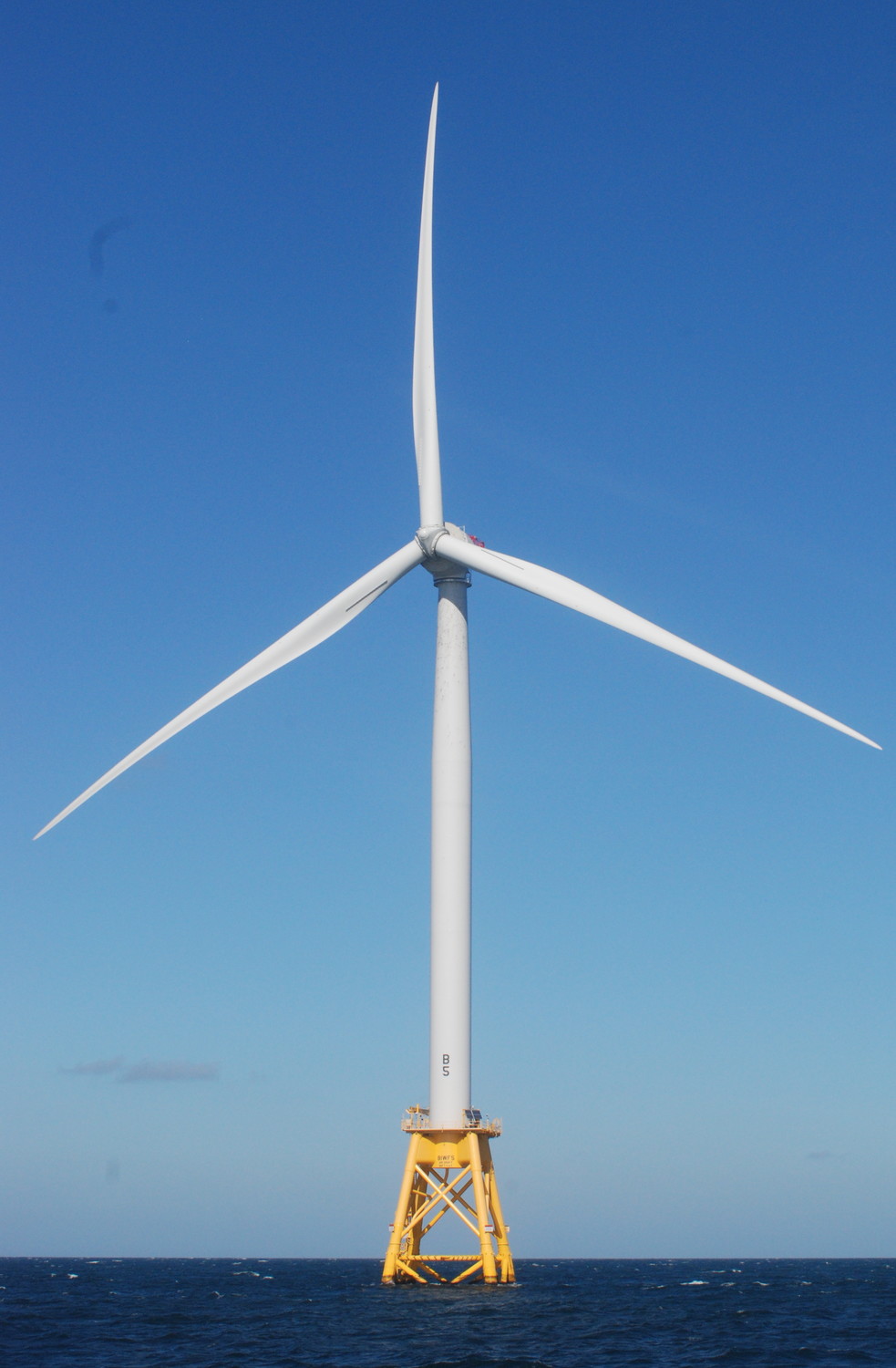 The windmills are each more than 550 feet tall, but are barely visible from a distance.
Scott Brinton/Herald 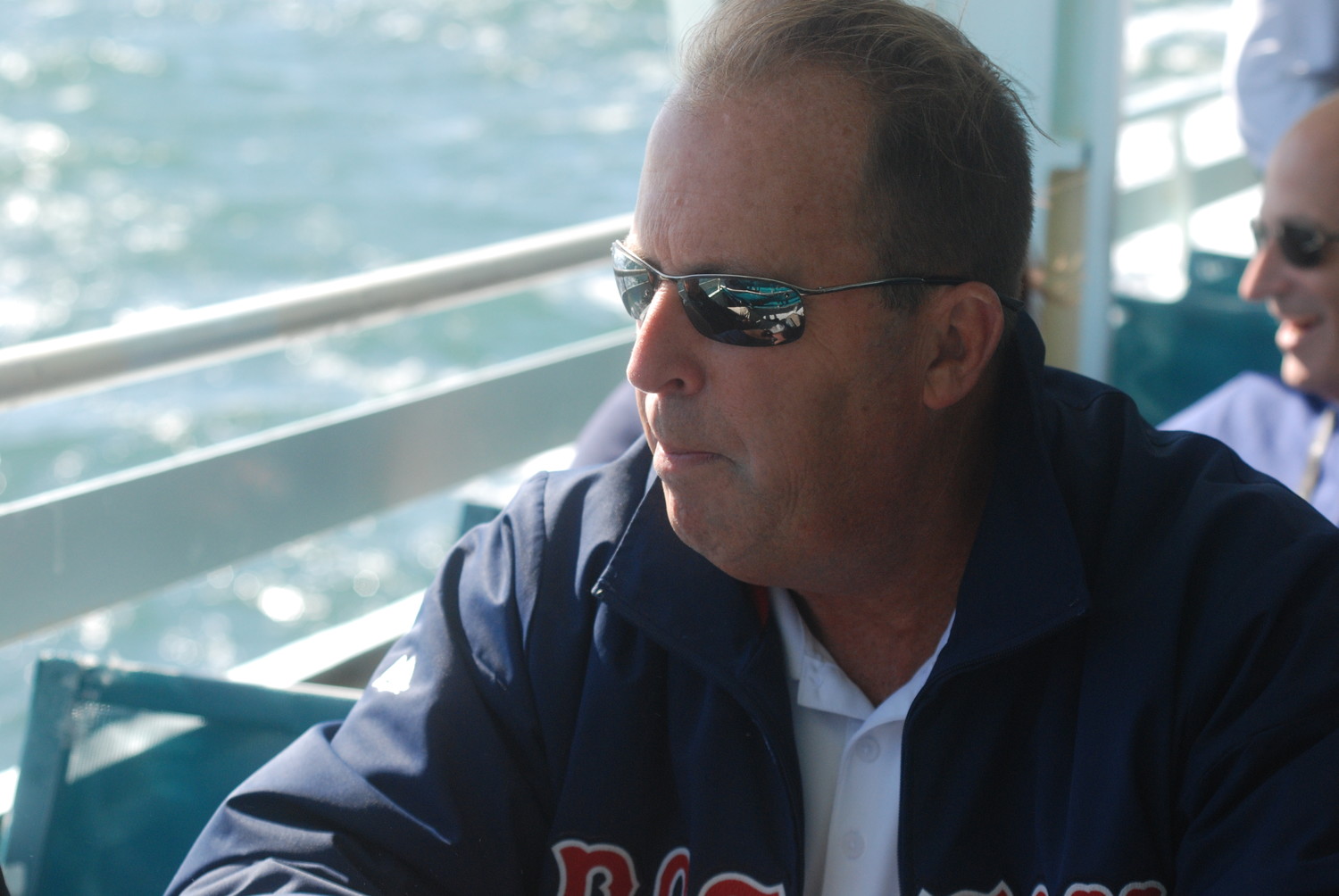 Kevin Law, the LIA president and CEO, relaxing on the trip out to the wind farm.
Scott Brinton/Herald 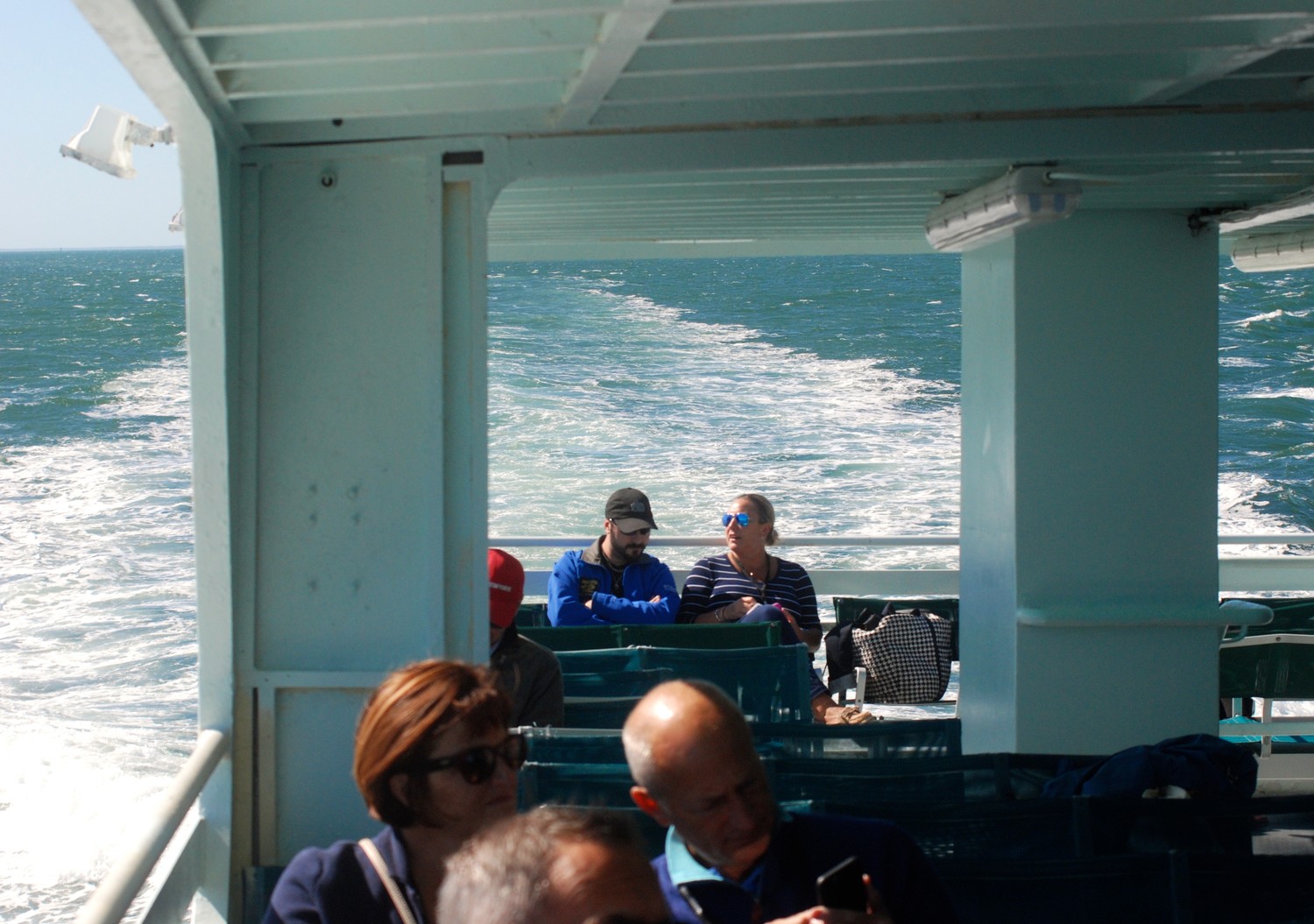 New York officials say they hope to generate half of the state’s power from renewable sources by 2030. To meet this goal, officials are looking to the recently constructed Block Island offshore wind farm as a model for how renewable energy can power whole communities.

Located three miles off Block Island, and 16 miles from the Rhode Island mainland, five towering windmills comprise the first offshore wind farm in the United States. Now New York and Deepwater Wind, the company that built the Block Island farm, are excitedly looking off the coast of Montauk to build a second wind farm.

On Oct. 4, in a collaboration with the Long Island Association, Stony Brook University’s Advanced Energy Research and Technology Center and the Gershow Recycling Corporation, Deepwater Wind representatives took several members of the Long Island business community and local media to see the windmills, which now provide nearly all of Block Island’s power.

The 550-foot-tall windmills each have three 240-foot-long blades, which are held up by nearly 200-foot-tall foundations, yet appear to be nothing more than specks on the horizon on the departure from Montauk. The tips of the blades can spin at a speeds of more than 200 mile per hour, yet they seem to move so slowly that one could grab on. They’re connected to Block Island by underwater cables, which then lead to the Rhode Island mainland, where they send any surplus power or draw any extra energy that might be needed.

Clinton Plummer, Deepwater’s vice president of development, explained that before this project, Block Island was powered entirely by a diesel electric plant, which polluted the environment, but served the year-round population of around 1,000 and a summer population of 10,000. “The [wind farm] project exists to fill two separate purposes,” shouted Plummer over the sound of the wind and the waves, with the windmills looming nearby. “The first is renewable energy and the second is reliable energy for a community that is very difficult for other forms of energy to serve.”

The tour was designed to create interest in the coming installation of a similar, larger wind farm off the coast of the South Fork, for which Deepwater already has a lease. “It’s important to educate people as renewable sources become a bigger part of our energy mix,” said Robert Catell, the AERTC chairman.

Fifteen turbines will be built about 20 miles to the southeast of the Block Island farm and send power back to Long Island. Plummer said the windmills wouldn’t be visible from the bluffs of Montauk, even if the farm increased to 200 turbines, which the lease would allow for eventually. However, Plummer said Deepwater’s plan is to build in stages. “Much like Block Island, East Hampton needed a new source of energy… LIPA found that our project was the most-cost effective resource of power generation for the South Fork of Long Island,” Plummer said.

The organizations also invited Catherine Bowes, senior climate and energy manager for the National Wildlife Federation, who quelled any concerns about the effect that the farms might have on sea creatures. “Fish love nooks and crannies,” she said. “These farms become artificial reefs for the sea life to latch onto.” She added that birds would not be disturbed, because they typically fly closer to the water to hunt. Construction noise might disturb whales, so work on the wind farm must be planned around their migrations.

Plummer also said that the Block Island wind farm created 300 jobs in Rhode Island, where the windmills were partially assembled. Kevin Law, president and CEO of the Long Island Association, said he sees the wind farm as a likely boon for local business. “Our energy challenges are a business opportunity,” he said. “There’s a movement for clean energy, and the more projects that happen, the more their price tag drops. We hope that we can garner support for these opportunities.”

The first foundation for the Block Island farm was laid in July of 2015, and the project was completed in October of 2016. According to Plummer, Deepwater Wind expects construction on the South Fork farm to begin in 2021 and be completed by the end of 2022.