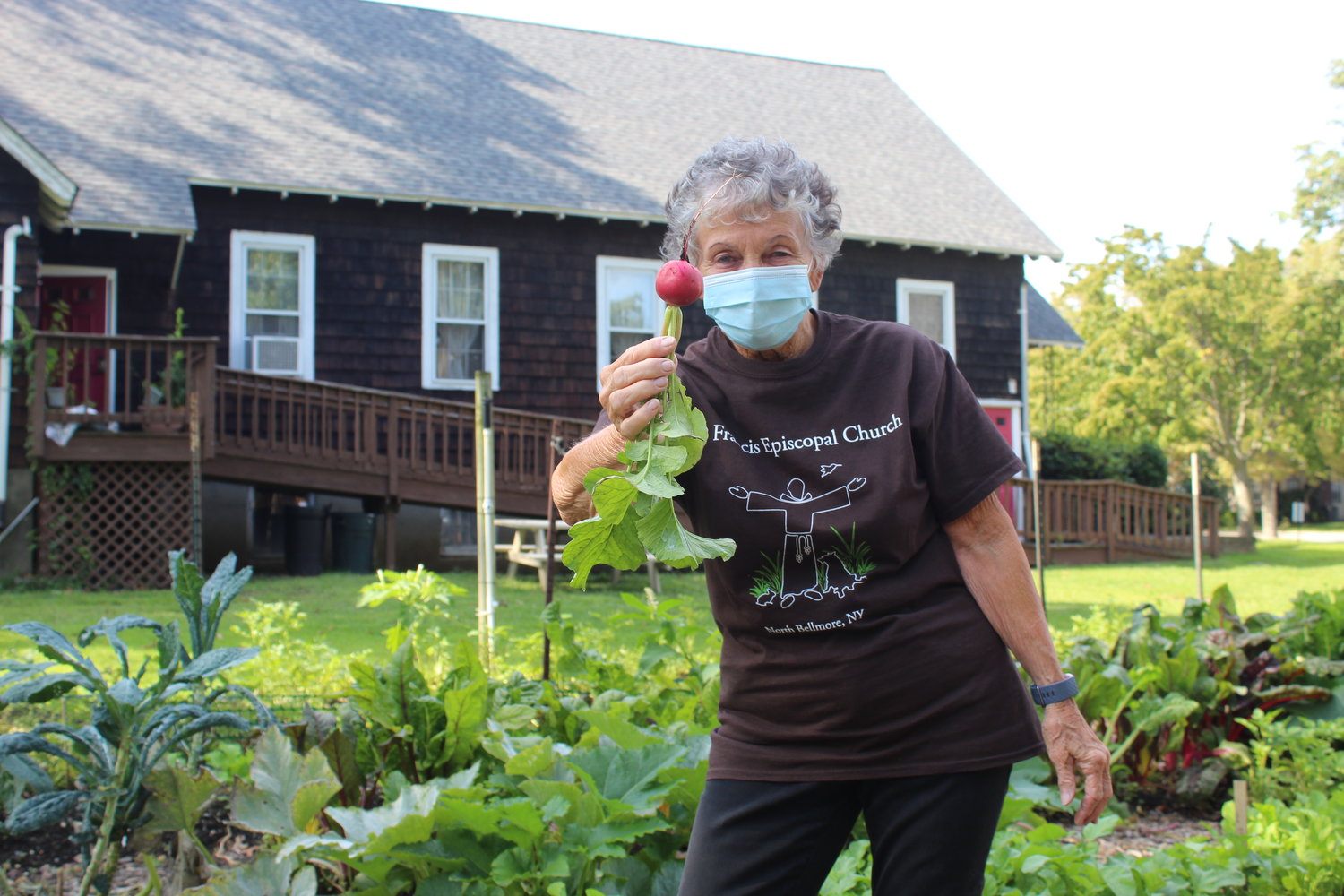 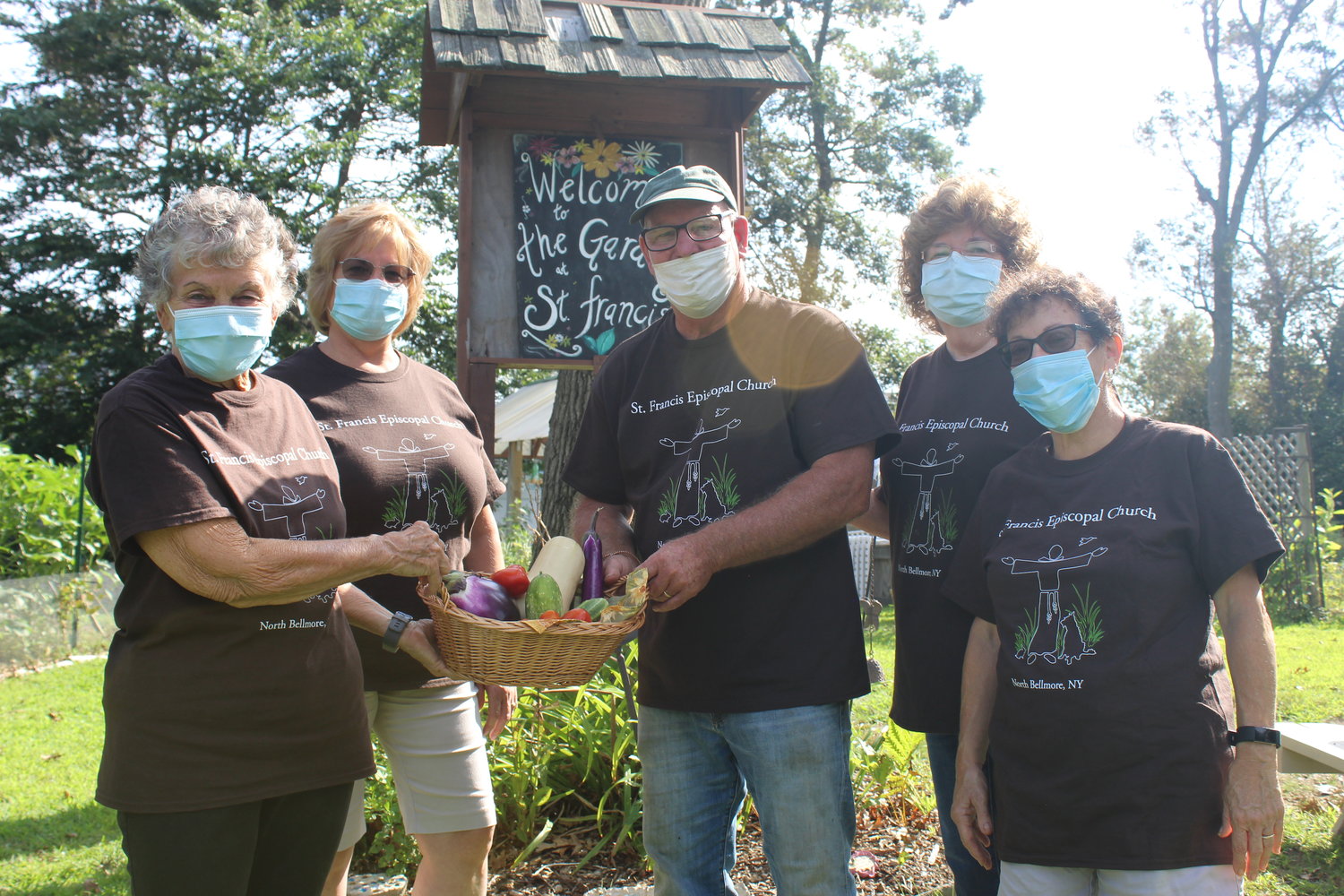 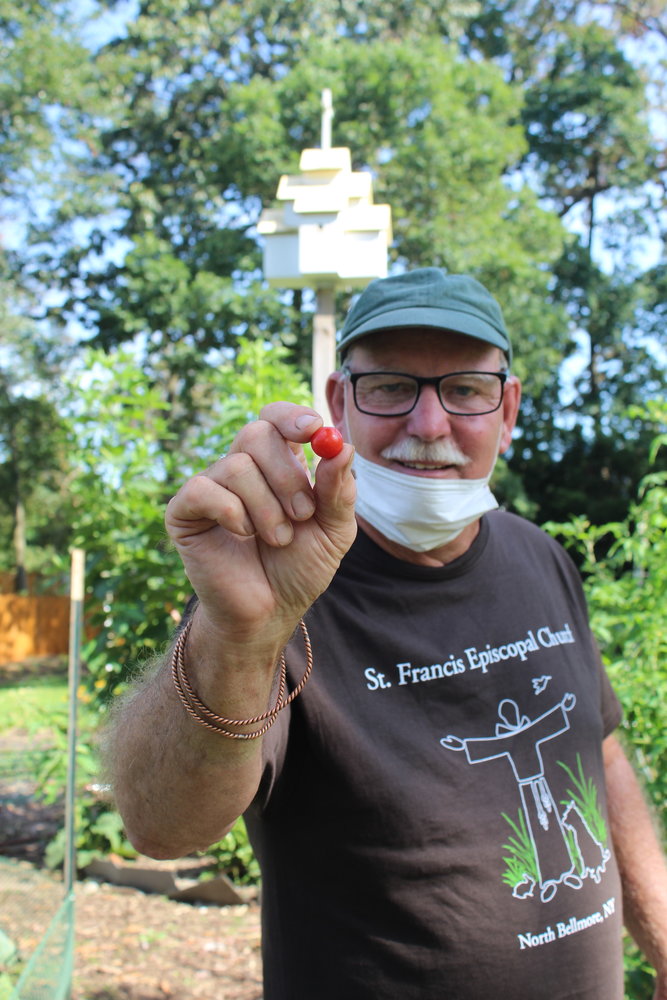 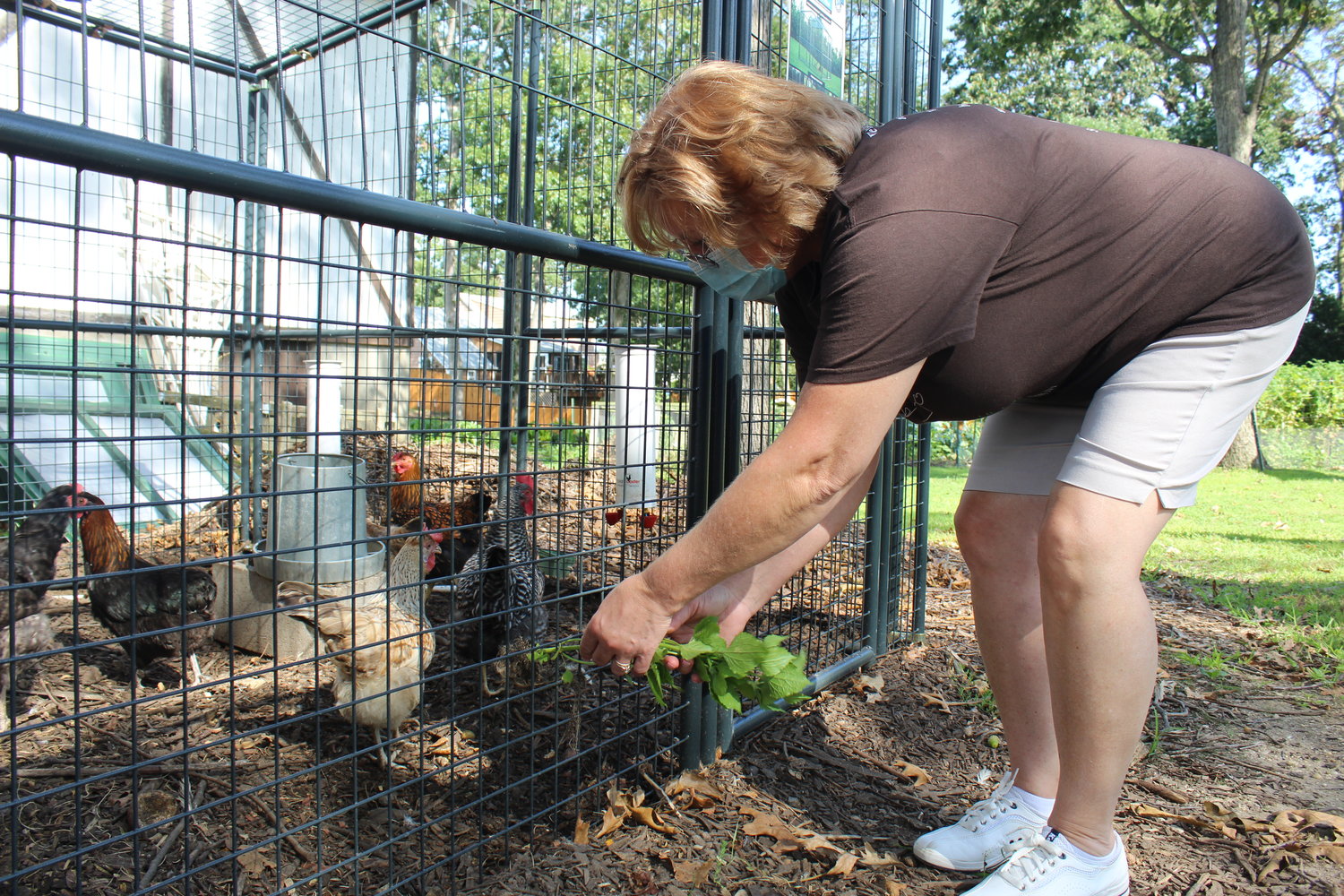 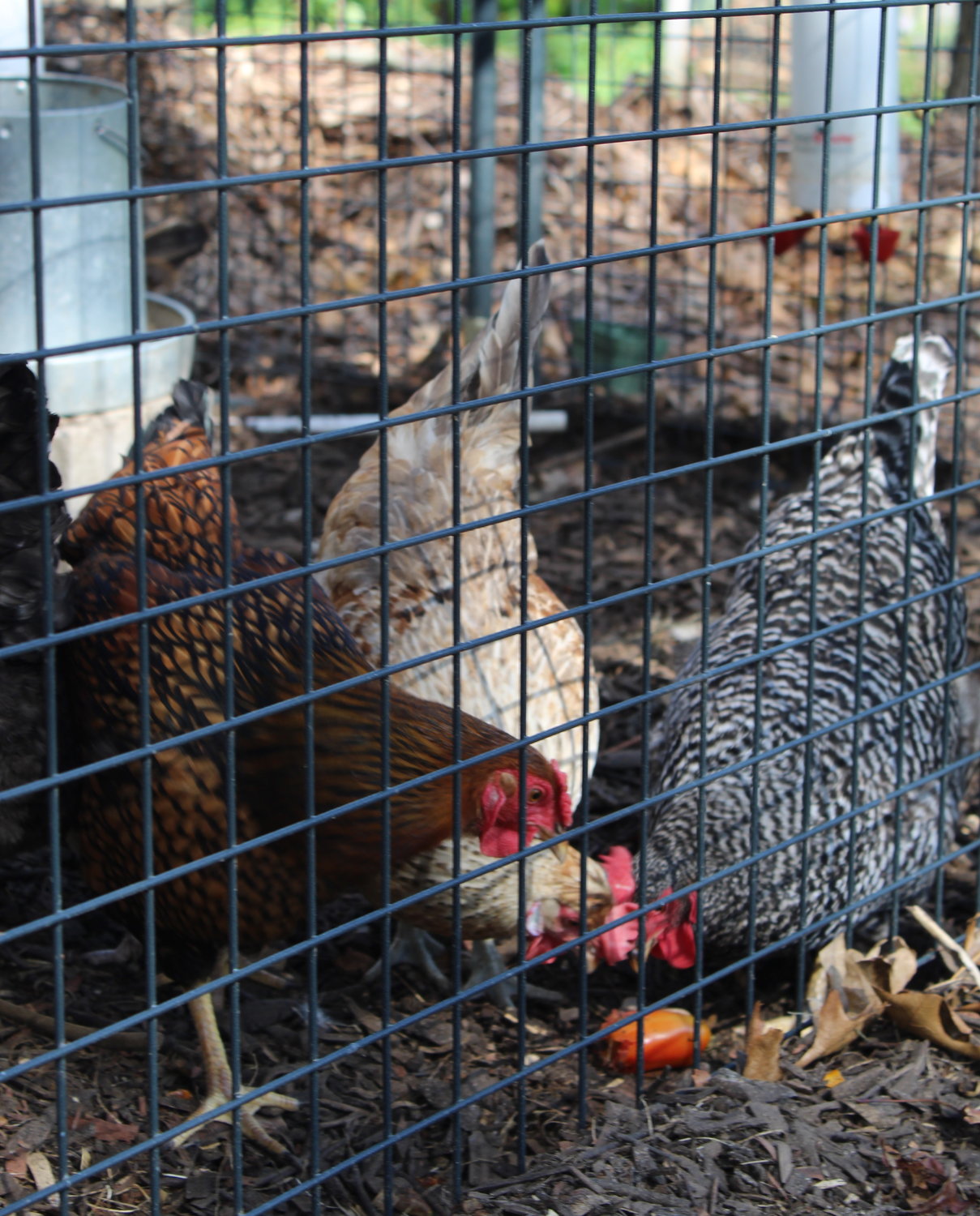 The chickens feasted on freshly-harvested tomatoes picked from the garden just minutes before.
Alyssa Seidman/Herald Life
Previous Next
By Alyssa Seidman

Sunlight tangled into the blossoming crops sequestered on less than an acre of land behind St. Francis Episcopal Church in North Bellmore one late summer afternoon. While the muggy sweat of the day didn’t disturb the vibrant façades of organic tomatoes, eggplants and other low-hanging fruit, garden manager Skip Wade said he would hold off on watering for now, since rain was in the forecast.

Ten years ago, a green-thumbed parishioner suggested the church develop the once lifeless plot into a self-sufficient garden governed by volunteers. After wardens of the vestry secured a $10,000 grant from Episcopal Ministries, the garden started to bloom.

“Our idea was to have a farm stand where we would sell our vegetables, but the primary purpose was to feed the hungry among us,” said founder Ann McPartlin, of Freeport. “People thought we were crazy.”

Parishioners were apathetic towards the garden at first, and sowing the land was difficult since the soil had previously been neglected. But in 2013, when St. Francis — then known as St. Marks — merged with Christ the King in East Meadow, the garden’s roots began to strengthen.

While services inside parish hall have ceased to comply with Covid-19 mandates, the Garden at St. Francis is still growing strong. And as it marks its 10th season amid a global pandemic, its mission is more important than ever. One of its partners, the Bellmore-Merrick Community Cupboard, has seen an influx of food-insecure individuals since the pandemic began. Before March, the cupboard assisted roughly 20 families. Now, McPartlin said, it’s assisting almost 90 families.

“Everybody thinks that the hungry people are somewhere else, and what we do really helps to bring healthy choices to [those] families,” she added. “It’s a blessing.”

Roughly 15 volunteers tend to the garden during growing season to prepare the soil, plant seedlings and harvest the yield. Every Sunday, a farm stand is set up in parish hall so residents can purchase the cream of the crop. In addition to the sprawling rows of sprouting produce, visitors can also find flowers beds, two commercial beehives, a chicken coop and a labyrinth out back.

Camille Gaynor, of North Bellmore, has volunteered at the garden since the beginning. As she plucked a deep pink radish from the ground, she said she didn’t mind getting dirty in order to help others. “It’s a very good experience to feel in here,” she added while pointing to her heart, “when you’re helping those that are less fortunate.”

Kim Black, of North Bellmore, harvested a handful of cherry tomatoes to feed to the chickens while explaining the importance of the garden’s slogan. “I feel very blessed and fortunate to be in a position where my family can afford to eat, but here we’re ‘growing to give,’” she said. “I raised my children to know that if you have, you need to learn to give back, as well.”

While St. Francis’ spirited crew of garden gurus has adjusted to social distancing guidelines, McPartlin said they’re “pretty huggy” on a regular day. “We were always hugging, laughing, falling into the tomatoes, talking to scarecrows,” she said. “It’s created a family.”

The garden also provides a tranquil space for visitors to enjoy despite being steps away from bustling Bellmore Avenue. “The whole atmosphere here is one of welcome and serenity and peace,” McPartlin said.