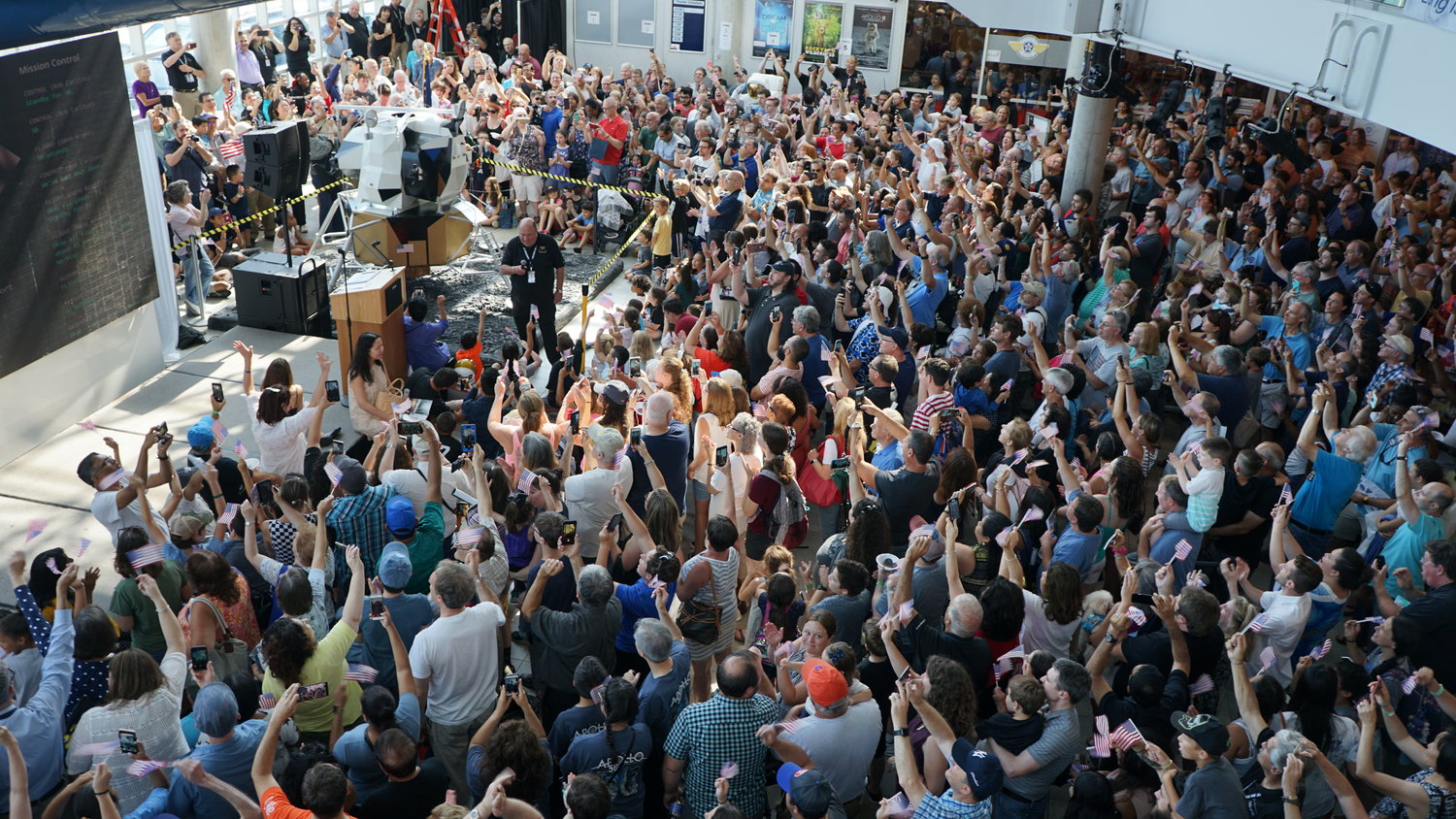 More than 1,000 people packed the Cradle of Aviation lobby on Saturday to witness the descent of a one-third-scale model of the lunar excursion module, timed to the exact moment that the craft touched down on the moon 50 years earlier
By Peter Belfiore/Herald 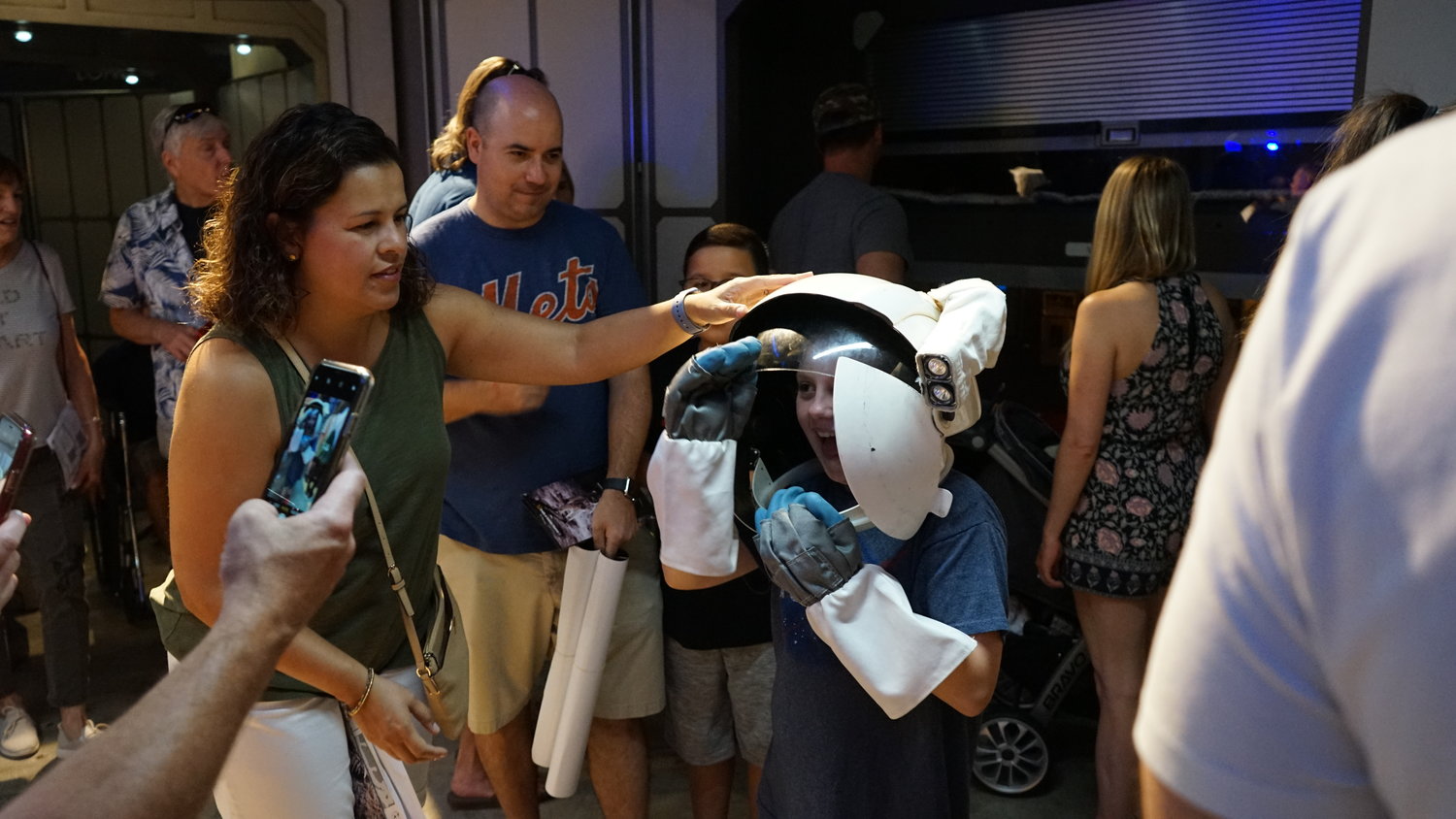 Emma, 10, tried on an astronaut’s helmet at one of the cradle’s numerous interactive exhibits.
By Peter Belfiore/Herald 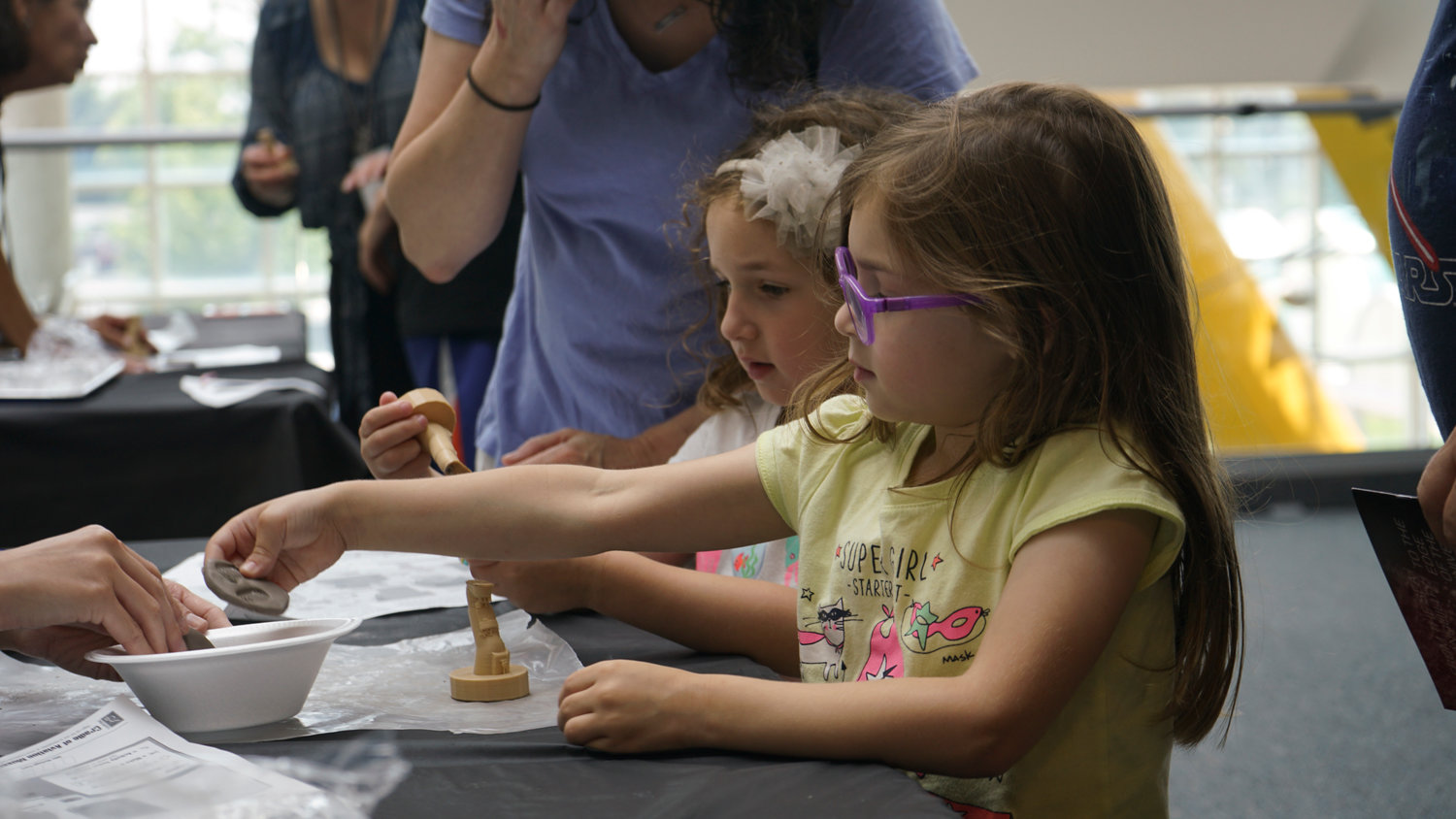 Bryce, 7, front, with her sister Layna, 4, used 3D-printed astronaut boots to make their own moon footprints.
By Peter Belfiore/Herald 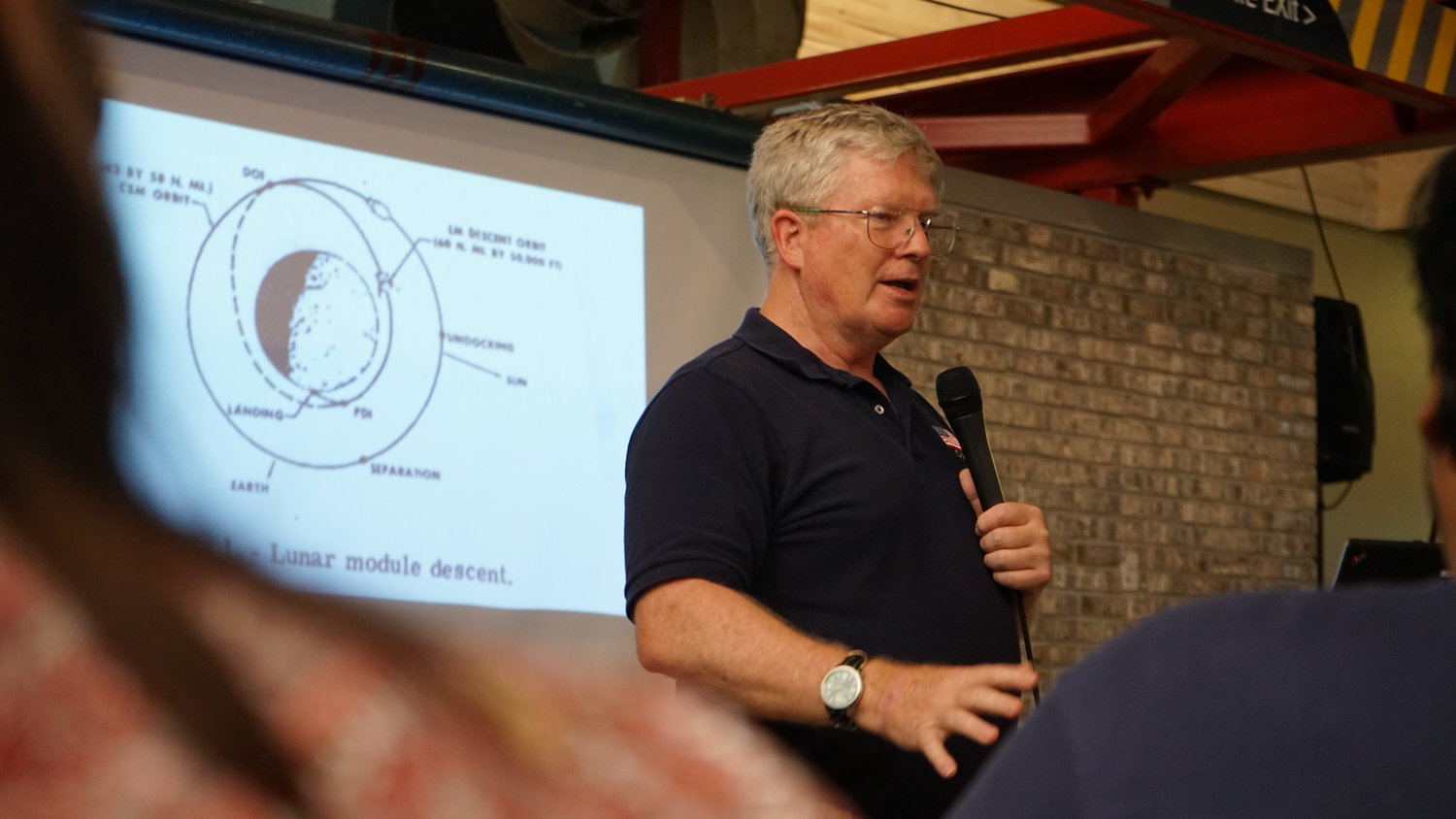 Space shuttle astronaut Bill Shepherd, who was part of the first crew to inhabit the International Space Station, explained some of the science that went into the moon landing.
By Peter Belfiore/Herald
Previous Next
By Peter Belfiore

At around 4:15 p.m. on Saturday, the lobby of the Cradle of Aviation Museum in Garden City — packed with more than 1,000 people of all ages — was largely quiet except for the iconic beeps, or Quindar tones, as they are officially known, reverberating throughout the cavernous, glass-enclosed room.

The sounds bookended the radio transmissions sent between mission control and the Apollo 11 astronauts, as the calm voices of Neil Armstrong, Buzz Aldrin and Flight Director Gene Kranz played over loudspeakers to the rapt crowd. On a roughly 30-foot screen in front of them, vintage footage was displayed of the original broadcast of Armstrong and Aldrin’s final descent onto the moon’s Sea of Tranquility: the chosen landing site for their historic mission.

With 30 seconds to go, a one-third-scale model of the lunar excursion module, the spindly vehicle used for the landing, began to descend on cables from the ceiling, and on the screen, a powdery spray of lunar regolith, disturbed by the ship’s single rocket engine, became visible.

“We’re picking up some dust,” Aldrin said, and a few moments later, “Contact light!” as roughly six-foot probes hanging from the legs of the lander touched the moon’s surface. Then, the room erupted with chants of “U.S.A, U.S.A,” as the two safely landed, drowning out Aldrin’s famous pronouncement, “Houston, Tranquility Base here. The Eagle has landed.”

The event marked the exact moment, 50 years later, of one of humankind’s greatest achievements, when the United States safely landed two people on Earth’s lone natural satellite. It was a part of Moon Fest, as the Cradle’s anniversary celebration was called, and featured special exhibits with various Apollo artifacts and activities for children as well as space shuttle astronauts Bill Shepherd, Charlie Camarda and Bob Cenker, who were available to answer questions and sign autographs.

The mock landing ended a daylong celebration of the mission, which has served as an inspiration for generations.

“It was a big breakthrough achievement in both a scientific sense and a more enlightened sense,” said Justin Woodruff, 18, from Bellerose. “Everyone in America was watching this, and it really unified us.”

Ameera Iftekhar, 21, from Floral Park, who is pursuing a degree in physics, said the Apollo 11 mission is an inspiration for her and sparked her interest in space.

Ten-year-old Emma, who was found checking out some of the museum’s special exhibits, said that she was thankful the Apollo 11 mission was a success, adding, “I’m happy they came back safe.”

“We celebrate [Armstrong] now because it was a great accomplishment,” her friend, Reilly, also 10, said of his first steps on the moon, noting that the landing was “special” to her.

Earnest Finamore, a retired Grumman employee of 45 years who worked on the lunar modules at the aerospace firm’s Bethpage facility, expressed appreciation at witnessing the excitement of so many over the Apollo program.

“To see all these people today, and recognize what we did, and all. It was really nice,” he said.

Finamore was an inspector in Grumman’s clean room, where the lunar modules were built. He patrolled the sterile, first-of-its-kind facility — pressurized at five pounds per square inch to eliminate dust — to ensure that no fingerprints or germs got onto the delicate lander. If an engineer needed to touch the craft with bare hands, he had to ensure that it was disinfected with trichloroethylene, swabbed down and dried.

Once construction on the landers neared completion, Finamore, armed with a flashlight and mirror, had to comb every nook and cranny of the module for loose material — rivets, shavings, washers, wire clippings — which in zero gravity could come into contact with the craft’s electrical systems or possibly injure the astronauts on board.

Finally, he, along with other employees helped hoist the modules into the air onto a specially designed machine, which rotated and shook them “until they didn’t make any more noise,” Finamore said, as the loose objects fell from the craft.

On the night of the landing, he recalled almost missing the moment on TV at his home, rushing outside to help his daughter who had fallen on her bicycle. Once it happened, however, he said he knew “we did the thing right because we didn’t crash.”

Finamore acknowledged that at 93 and ill, he will likely not be around for another anniversary, but he was grateful for the interest that the crowd had showed in the accomplishment that he, along with the roughly 400,000 other Americans working on the Apollo program at its peak, had helped make possible.

“It’s nice to see the kids and the people,” he said. “Answering their questions, and to see them realizing and learning, just now, what we did back then.”