Vocalist sets the tone for the yearly Jolson festival 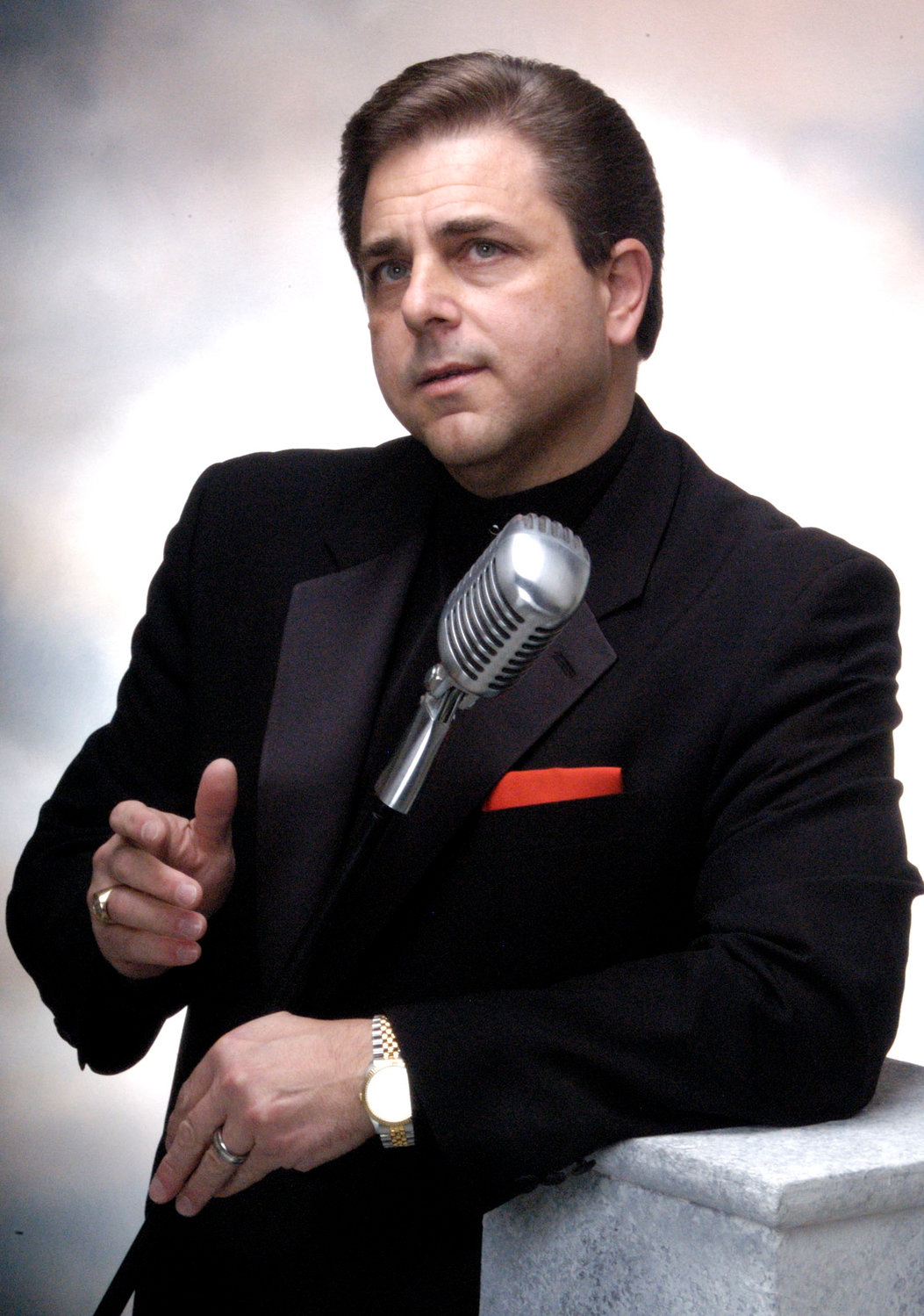 Tony B sings the Jolson standards, always a highlight of the festival.
Courtesy Tony Babino
By Iris Wiener

The annual Long Island Jolson Festival has become a local tradition, thanks in part to the acclaimed vocal stylings of Tony Babino. The musician and singer has been delighting Al Jolson fans for years — keeping the memory of the man coined the “world’s greatest entertainer” alive with his renditions of classic Jolson songs. He will once again showcase his talents, on Saturday, Sept. 7, at the festival’s 23rd edition, held at the Knights of Columbus in Oceanside.
Babino was first captivated by Jolson’s songs at about 5-years-old in the early 60s, when “The Jolson Story” (the 1946 film chronicling Jolson’s early life and career), was a popular feature on the “Million Dollar Movie” broadcast. He heard Jolson’s voice coming out of the television, and says that he “not only loved the movie, but his voice was totally different than anything I had ever heard.”
“It just captivated me as it did millions of other people over the years, when Jolson was alive and since he passed,” Babino recalls. “For some reason I was able to closely replicate that voice, and it has been with me my entire life. I’m honored to pay tribute to the man who was the forefather of modern show business.”
According to Babino, the list of Jolson’s extraordinary attributes is endless. He even goes so far as to rank Jolson as one of his heroes (alongside Bobby Darin, Frank Sinatra and the Beatles).
“I think he started American popular music as we know it,” says Babino, who also admires Jolson’s business sense, calling him an entrepreneur. “He had a good sense of what worked and wasn’t afraid to take chances. When he finally made it to Broadway as a young man he set the bar for all others who followed.”


Because 2019 marks the 70th anniversary of “Jolson Sings Again,” the sequel to “The Jolson Story,” Babino says that he and longtime Al Jolson Society President Jan Hernstat will give special attention to the songs in the film.
“Jolson is still the only celebrity that had two movies made about his life while he was still alive, and he made millions of dollars from those movies, rightfully so,” he says. In fact, Babino recently took in a showing of the film on a movie theater screen for the first time, and still managed to be moved by its sentiment and power.
“I got kind of emotional hearing Jolson’s voice coming off the big screen. I don’t know if it’s because I’m getting older, but it still resonates,” he says, laughing.
Babino fondly recalls performing at the Ziegfeld Theater as a teenager, and later joining Connie Haines of the Harry James and Tommy Dorsey bands. Later on, thanks to Hernstat, he was given the opportunity to perform for Evelyn Keyes and Barbara Hale, the actresses who portrayed two of Jolson’s wives in his films. “[Hale] sat literally one foot away from me on that stage. She was a beautiful, nice person, and was really in amazement at what she was hearing. That meant a lot to me.”
Before Babino actually owned a Jolson record, he would listen to one that belonged to his aunt, singing along, learning all of the songs. When he finally read the liner notes, he learned that the singer he had been imitating was not, in fact, Al Jolson; he had been learning Jolson’s songs and sound through Norman Brooks, a Jolson singer himself. Cut to years later, and Babino found himself on stage at a Manhattan restaurant performing a few numbers with Brooks; a seminal moment in Babino’s long career.
“After the show he said, ‘Hey kid, can you sing in your own voice?’ and I said, ‘I think so, but this is all I’ve been doing since I was a little kid.’ He gave me the best advice when he said, ‘I’m kind of trapped here. I pretty much sound like this all the time. If you have your own voice, use it, make a career, and if you love Jolson that much, you can always pay tribute to Jolson, but you’ve got to be you.’ That was a major moment for me as a singer and as a life experience.”
Babino went on to write a number of songs, and has seen his original work and covers featured in movies, commercials and television shows.
In addition to Babino’s “The Heart of Al Jolson,” this year’s festival features “The Immortal Jolson, a revamped episode of “Hollywood and the Stars.” Jonathan Smith and Bob Greenberg will also be on hand with some comic relief as they take on Laurel & Hardy.
Attendees can meet Eddie Cantor’s grandson, Brian Gari, and participate the annual auction (at which everyone is welcome to make donations).
As for Babino, he says he always gets requests to sing in his own voice amidst Jolson staples like “Swanee” and “My Mammy,” and he is happy to accommodate. “What we really want to accomplish year after year is having fun and keeping the memory and legacy of Jolson alive. That’s what it’s all about.”For more information or to obtain tickets, call Jan Hernstat at (516) 678-3524.
Report an inappropriate comment