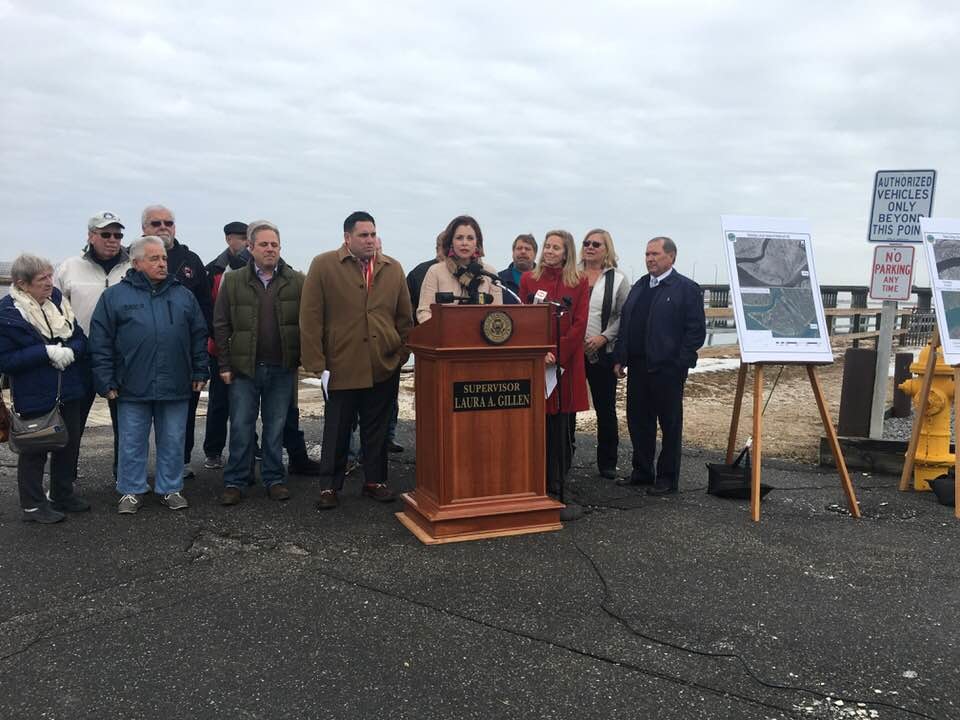 Officials said the plan to dredge Sea Dog Creek, a channel north of the Loop Parkway, and a portion of Reynolds Channel that connects to the West Marina, would make the waterway more navigable and restore marshes that help protect coastal communities from storm surges.

After Hurricane Sandy, a shoal was created north of the Loop Parkway drawbridge, where the eastern end of Sea Dog Creek connects with Long Creek. Shorelines eroded into canals and the waterways became clogged with debris, creating dangerous conditions for boaters and fishermen. Town officials said many boaters have reported that the channels are unsafe to navigate.

Town Councilwoman Erin King Sweeney, who was joined by Town Supervisor Laura Gillen, Town Councilman Anthony D’Esposito and local boaters, said she plans to push the Department of Environmental Conversation for permits that would allow the town to dredge Sea Dog Creek and unclog access points to the Great South Bay area and use the sand to rebuild protective marshes.

“Dredging the creek and using the material to restore our marshlands will be a win-win,” King Sweeney said. “Our boaters can navigate more freely, and a restored marsh will help protect against coastal flooding as well as protecting a valuable wildlife habitat.”

Since Sandy, the geography underneath the water has drastically changed, Gillen said, pointing out that boaters and commercial fishermen risk crashing into sandbars as they travel through the area.

“The sandbars are basically making it impossible for boaters to navigate Jones Inlet,” said Matt Brennan, president of the Point Lookout Civic Association. “The sandbars also prevent the proper tidal flow, damaging our wetlands and putting our inland neighbors at risk. So it’s not just a Point Lookout issue — it’s an issue for the entire area.”

Gillen added that the ecological changes due to the storm also make local communities more prone to flooding.

“From East Rockaway inlet, to the Great South Bay, our waters have shallowed out between three to five feet,” Gillen said. “By deepening Reynolds Channel and reinforcing the marshes around our homes, we will be able to hold more water in the back bays while simultaneously restoring our natural landscape to help protect against future coastal erosion.”

The collected sand would be deposited on the beach south of Sea Dog Creek, west of the Loop Parkway drawbridge, town officials said. The marshes in the area are half the size they were about 100 years ago, they said, and the marshes are diminishing in size by about 22 acres a year.

“We estimate about 40,000 cubic yards of underwater material should be dredged in Sea Dog Cove, and then transported to nearby Alder Island and High Meadow Island,” Gillen said. “Our [Conservation and Waterways Department] is already equipped with two heavy duty dredges that can grab approximately half a cubic yard of material at a time, meaning we can complete the job in approximately one month.”

Department of Conservation and Waterways Commissioner Tom Doheny also said the project would be completed in a month, and would begin as soon as the town receives the permit from the DEC. Town officials did not disclose the cost of the project, but said that it’s included in the Department of CW’s $7.4 million 2018 adopted budget.

“It is critically important that the Town of Hempstead continue to look for ways to further protect itself and strengthen our resiliency before the next Superstorm Sandy hits,” Gillen said. “These efforts will undoubtedly help mitigate threats of flooding for tens of thousands of residents here in the Town of Hempstead.”