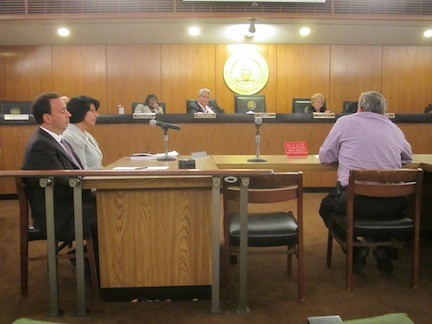 Randy Shotland, of Merrick, addressed the Hempstead Town Council on June 10, voicing his opposition to a proposed 7-Eleven at the northwest corner of Merrick Road and Babylon Turnpike in Merrick.
Brian Racow/Herald Life
By Brian Racow

Merrick residents articulated many reasons why they do not want to see a 7-Eleven open at 150 Merrick Road, opposite Levy-Lakeside Elementary School, during a June 10 Hempstead Town Council meeting. Town officials, however, said there was nothing they could do legally to stop the business from moving in.

AJM RE Holdings V, LLC, a company that Great Neck real estate developer Adam Mann owns, holds the deed to 150 Merrick Road. Mann and his contractor applied to the town’s Building Department in March for a permit to build a convenience store at the location. The developer plans to lease the property to 7-Eleven, which aims to have the store built and open for business by December, according to an attorney for Mann and 7-Eleven’s franchising website.

About 30 Merokeans attended the Town Council meeting, which started at 7 p.m. last Tuesday at Town Hall in Hempstead. Several addressed the Council during the meeting’s public comment segment, arguing that the 7-Eleven would cause traffic congestion and accidents, attract crime, hurt nearby businesses, lower home values and introduce children to alcohol and tobacco. Town Supervisor Kate Murray was absent from the meeting, which was one of four the Council scheduled in the evening this year.

“The important part is quality of life,” said Randy Shotland, a lifelong Merokean. “Quality of life is about why my parents moved here in 1948, to a bedroom community. We’re not in Queens, we’re not in Brooklyn, we’re not in the Bronx. We’re in Long Island … Twenty-four hours a day is not acceptable — 10 p.m. to 4 a.m., I don’t know any Merokean that’s coming out to buy a six-pack of beer, tobacco, and whatever else they sell. It affects our community … Big America is gobbling up small America.”