‘Eccentric bohemian’ who made people smile; Foote fine-tuned his Roosevelt to make him real 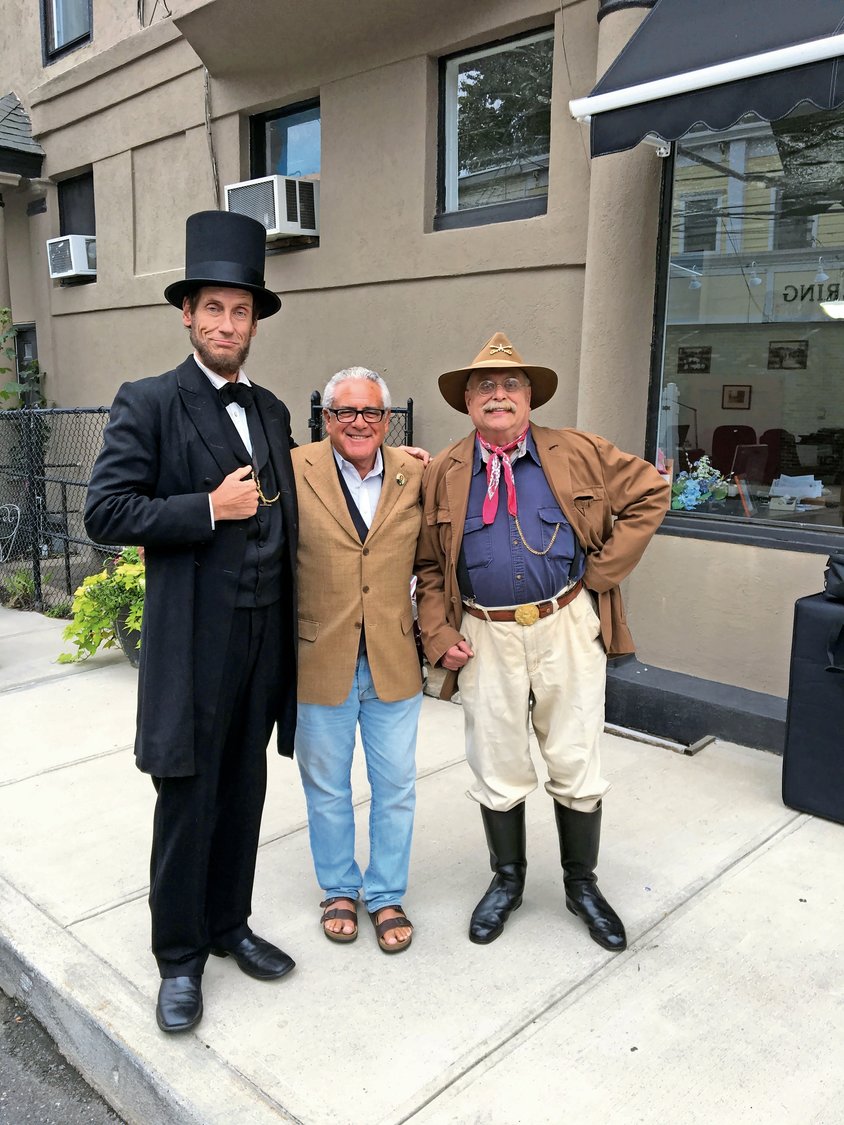 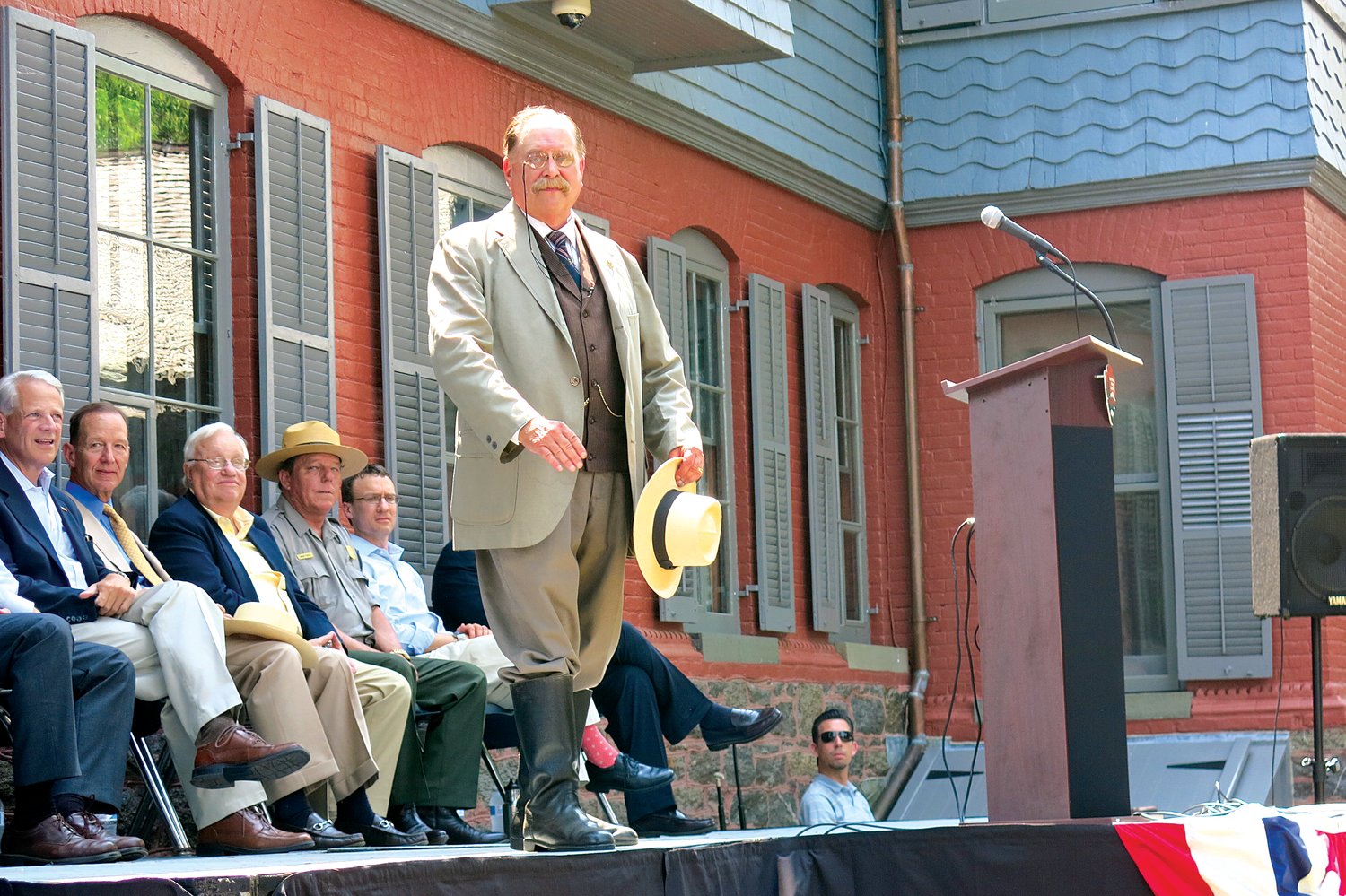 James Foote shared one of T.R.’s speeches at the reopening of Sagamore Hill in July 2015.
Christina Daly/Herald
Previous Next

Jim created original, compelling opportunities for kids and adults to connect with Theodore Roosevelt in a manner that transformed a visit to Sagamore Hill from ‘ordinary’ to extraordinary.”
Jonathan Parker, superintendent at Sagamore Hill National Historic Site
By Laura Lane

James Foote, who was beloved in Oyster Bay and the surrounding villages for his portrayal of President Theodore Roosevelt, died in his sleep on May 4, just as the former president had a century earlier.

Foote’s wife, Joni, said she thought he was playing a joke on her when she tried to rouse him, because he liked to kid around. But when she threatened to call 911 and he didn’t respond, she knew he was gone.

“When the fireman came to the house, he asked me Jim’s name,” Joni recounted. “When I told him, he paused and said, ‘The Teddy Roosevelt guy?’ He had tears in his eyes.”

Foote, who was 73, had a stroke in 2019 and had diabetes. He had lost the use of one hand and an arm and walked a bit off kilter. Even so, he often met up with friends at the Village Green in his hometown of Sea Cliff, where they could be found absorbed in conversation.

“He was one of those real fixtures, an eccentric bohemian that Sea Cliff is known for,” former Mayor Ed Lieberman said.

Foote was born in New Jersey but grew up in an apartment in Glenwood Landing. He graduated from North Shore High School in 1968, and enlisted in the Navy two weeks later. But two weeks before he was to leave for basic training, his stepfather, John Foote, died. “He died in Jim’s arms,” Joni said. “He so loved his stepfather, and considered not leaving yet. But he decided to go, because he thought his stepfather would have wanted it that way.”

For four years during the Vietnam War, Foote was the plane captain on the aircraft carrier USS Constellation. He was among the group called the “brown shirts,” the men who used hand signals to launch planes off the ship and direct them upon their return.

He loved Sea Cliff, so when he married Joni Burke nearly 43 years ago, they bought a house there. The couple did not have children, but Foote loved children and they loved him, Joni said.

At one time he traveled 20,000 miles a year to portray Roosevelt, visiting schools across Long Island. He was reminded of how big an impact he had on students a few years ago, when a man stopped him on the street. “He said, ‘You came to my class, and because of your visit I became a history teacher,’” Joni said. “Jim loved hearing that. He glowed when people made comments like that.”

A lifelong lover of history, Foote first became interested in Roosevelt as a Boy Scout, when his troop visited Sagamore Hill, the Cove Neck home where T.R. lived in the summer during his presidency, and then full time until his death in 1919. After that, Foote read everything he could get his hands on about him. By the time he became a re-enactor, Foote had memorized Roosevelt’s speeches, and mastered his staccato oral style and even his gait.

“Jim hated being called an impersonator, because he thought that was show business, and he wasn’t doing that,” said Bill Bleyer, a retired Newsday staffer who wrote often about Foote. “He was always very concerned about authenticity. He didn’t want to be a caricature.”

The idea of portraying the 26th president came about after Foote grew a mustache while in the Navy, and in 1975 began wearing glasses. That’s when someone told him he looked like Roosevelt, Joni said, leading him to see if others felt the same way. He decided to go to a costume party as a Rough Rider, and bought his outfit at a thrift store. One of the partygoers asked him if he would march in an upcoming Memorial Day parade as T.R. “It snowballed from there,” Joni said.

By 1978, Foote was appearing regularly as Roosevelt. He began working as a volunteer re-enactor at Sagamore Hill in 1985, giving tours of Roosevelt’s home and the grounds. Sue Sarna, a former Sagamore Hill curator, met Foote in 1989. Sarna was new to the job, but couldn’t help but notice how Foote embodied Roosevelt, down to the clothing he wore. “He studied the details to get his clothing right,” Sarna said. “Depending on the event, he’d be wearing a top hat and tails, or if it was a western event he’d wear what T.R. wore when he was out West. Jim had several outfits.”

Foote appeared as Roosevelt for free until the late 1990s, Joni said. Then he began charging a minimal fee, to cover the cost of dry-cleaning of the costumes and gas.

He did well, booking several appearances. In 1994 he retired from his job as a machinist at Herbert Products, in Westbury, to become a Roosevelt re-enactor full time.

Joni said her husband read even newer books about T.R., because he felt a responsibility to answer questions from his audiences accurately. He spent hours fine-tuning his Roosevelt. Sarna said Foote brought the man to life at the museum.

“Jim inspired me to love T.R. more because I got to know him through Jim,” said Sarna, who is now the program manager at Fire Island National Seashore. “Someone would be giving a tour and he’d bound down the stairs as T.R., and it would enthrall people.”

Howard Ehrlich, CEO of the Theodore Roosevelt Association, has known Foote for decades, dating back to when he was a volunteer at Sagamore Hill. Ehrlich said he has many fond memories of his friend.

“Jim was almost like a historian,” Ehrlich said. “He knew [Roosevelt’s] famous speeches and sayings. Jim was a nice man who loved what he did.”

“Jim created original, compelling opportunities for kids and adults to connect with Theodore Roosevelt in a manner that transformed a visit to Sagamore Hill from ‘ordinary’ to extraordinary,” Parker wrote in an email. “His cordial, ever-knowledgeable and gregarious persona was popular with both visitors and staff.”

Tweed Roosevelt, the president’s great-great-grandson, said that Foote was one of the best re-enactors he’d ever seen. “Jim learned as much as he could about T.R. and set the standard,” Tweed said. “He brought T.R. to life, and by doing so served a wider audience than books and TV shows. I really liked him.”

Lieberman met Foote 25 years ago. The former mayor is also a history buff, and his law office is decorated with Roosevelt memorabilia.

“I took an immediate liking to him,” Lieberman said. “He had a wealth of knowledge. I was almost a student of his.”

Foote appeared as Roosevelt whenever asked, and took part in all of the local parades. He would lead Oyster Bay’s Fourth of July parade and speak at the bandstand afterward, reciting a T.R. speech.

Foote was also known for his sense of humor, and for being quick on his feet. When Lieberman asked him to attend a Lions Club convention to meet the members, Lieberman recalled with a laugh, “He came in after I introduced him, and said he hadn’t seen so many lions since his safari in Africa.”

Foote appeared as Roosevelt at the White House, in a History Channel documentary, on C-Span and even as a guest on “The Colbert Report” on Comedy Central. “I learned that Jim’s popularity and public recognition really skyrocketed after this appearance on Colbert,” Parker wrote. “Apparently visitors would recognize him in [Sagamore Hill] from Colbert, and ask him to repeat some of his ‘greatest hits’ from his appearance on the show. They loved it.”

Joni ordered red, white and blue flowers for Foote’s wake at Whitting Funeral Home, which was on Wednesday. And she made a decision that she said her husband would agree with. “Jim was big on pomp and circumstance,” Joni explained. “He’s going to wear his T.R. outfit, and the glasses, too. And I’m having the beard he grew during Covid shaved off.”