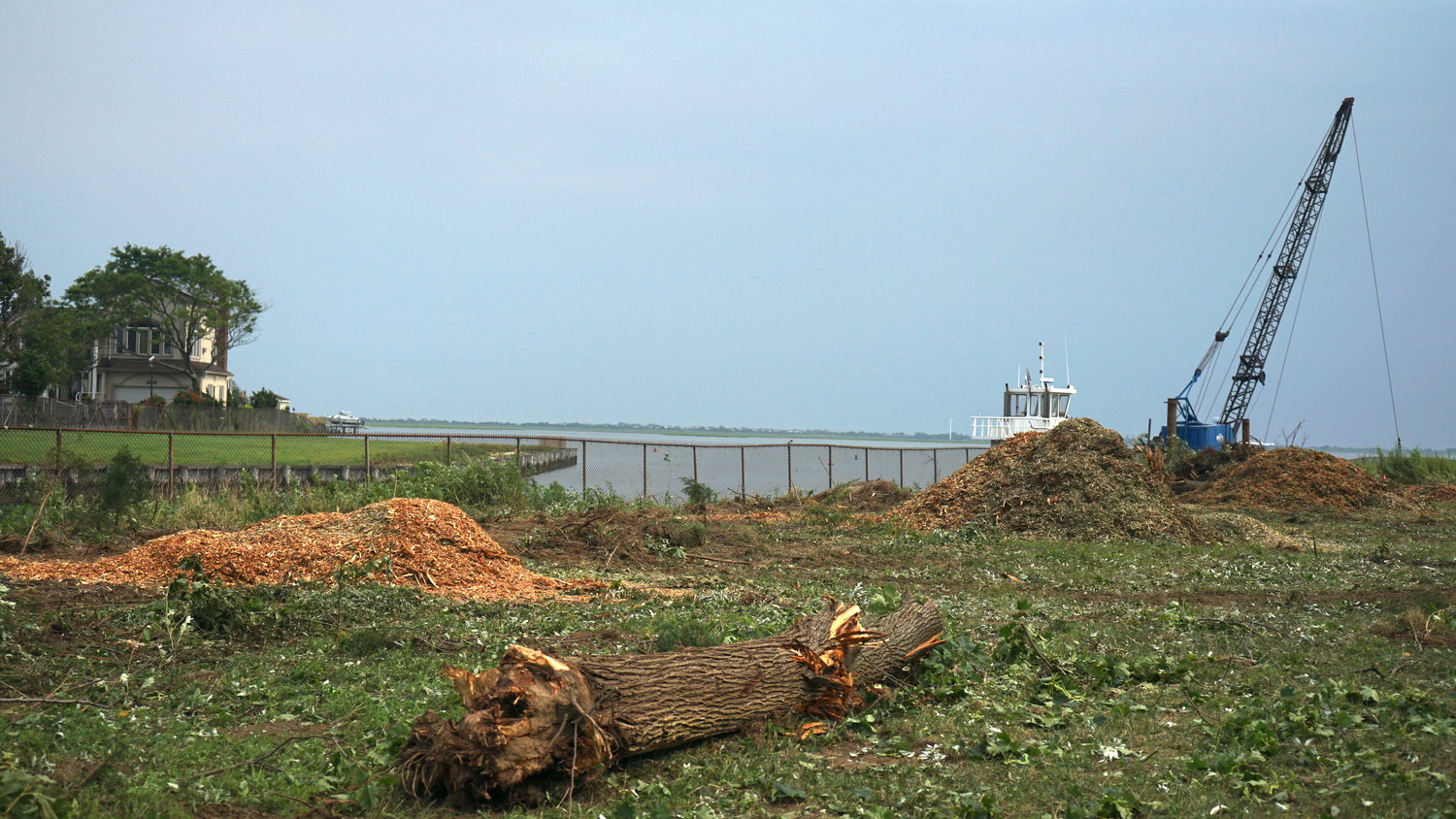 Construction begins for the $4.5 million Baldwin Park Shoreline Stabilization Project, an effort to enhance storm protection along the shore that would also create a nature walk.
Cristina Arroyo Rodriguez/Herald

This section of park was to be kept and promised as a preserve!”
Padraig G. Sentini, Baldwin
Baldwin Park Shoreline Stabilization Project Timeline

•2019: Design plans are finalized for the shoreline project.

•2020: Residents raise concerns and the plans were amended.

On June 21, the Baldwin Inside Facebook group was inundated with comments about trees being cut down in the wildlife sanctuary in Baldwin Park. “Very sad day for Baldwin,” Bonnie Rothman Weinstein posted, and Kathleen Andrews agreed, “Trees are so important to the landscape.”

However, most residents were simply confused, including Johnny Black, Tracey Gail Spatenga and Christine Martinez who simply asked, “Why?

“This is the Baldwin Shoreline Stabilization Project,” Councilmember Christopher Carini responded. “This is supposed to help prevent flooding in the future … this has been in the works since 2012, long before I took office.”

The NY Rising Community Reconstruction Program, which is part of the governor’s Office of Storm Recovery, was announced by Governor Andrew Cuomo in April of 2013. It was roughly more than $700 million for a planning and implementation program that was established to provide rebuilding and resiliency assistance to communities severely damaged by Hurricane Irene, Tropical Storm Lee and Superstorm Sandy in Oct. 2012.

In March 2014, the Baldwin NY Rising Community Plan, created by a local planning committee with community input, proposed a series of projects to the state, including a tree planting program, bulkhead replacements and natural and structural storm protection features along the shoreline, for the $10.6 million in state funds that Baldwin and Baldwin Harbor were deemed eligible

The state Community Development Block Grant Disaster Recovery Program prepared the Baldwin Park Shoreline Stabilization funding application in June 2017. In October, the Town of Hempstead authorized the submission of the application for $4,574,332.00 in funding from the U.S. Department of Housing and Urban Development administered by the New York State Governor’s Office of Storm Recovery. It was eventually approved in 2018.

This project aimed to stabilize the shoreline in Baldwin Park to prevent erosion from continuing to occur and sedimentation from entering the waterways of Oakwood Canal and Middle Bay. Existing deteriorating timber bulkhead would be replaced with a natural living shoreline, along with a new timber and vinyl bulkhead.

It also was to provide a pedestrian gravel pathway for public access and an access point to the canal for those who traveled along the South Shore Blueway Trail in kayaks and canoes. Marsh grass, upland trees and shrubs would be planted to create tidal wetland and upland areas.

By August 2017, the town had taken the role of subrecipient for the project and projected that design plans would be finalized by end of year. However, by the summer of 2018, only 30 percent of the design had been finalized.

Town engineers completed the designs in August 2019. The project was ready to bid for a spring 2020 construction start, after its approval by the New York State Department of Environmental Conservation.

However, at a January 2020 town meeting, Baldwin residents expressed some opposition to the project, so the plans were amended to eliminate a gravel parking lot, move a gravel walking path away from residences and relocate the kayak launch to the southern end of the site.

The projected 2020 start date was further delayed by the pandemic, that is, until present day. In March 2021, the bid request for construction was publicly announced, and it closed in April. In May, the town voted to award the contract to the lowest bidder, Woodstock Construction, who bid $3,110,200.00 versus the $3,328,158.75 bid from Atlantic Coast Dock.

The shoreline project is currently underway. Demolition has begun in Baldwin Park, cutting trees and clearing large swathes of what has been described as abandoned, barren land. Nonetheless, some residents have echoed the concerns about privacy, safety and disturbing the existing animals living there that arose in the January 2020 meeting.

Josephine Chianetta took to social media. “Why are they doing this during litter season?,” she wrote. “There is so much wildlife with babies living in the trees!”

Likewise, Padraig G. Sentini wrote, “This section of park was to be kept and promised as a preserve!”

The public area under construction sits across Baldwin Harbor waterfront properties that line the canal, ranging in price from $650,000 to $1.1 million, according to current Zillow estimates.

State Sen. Todd Kaminsky supports the project. “In light of our ever-changing climate and the increased severity and frequency of storms that Long Island will face,” he said, “this is an imperative and worthwhile investment in Baldwin … [this] is simply governing by common sense.”