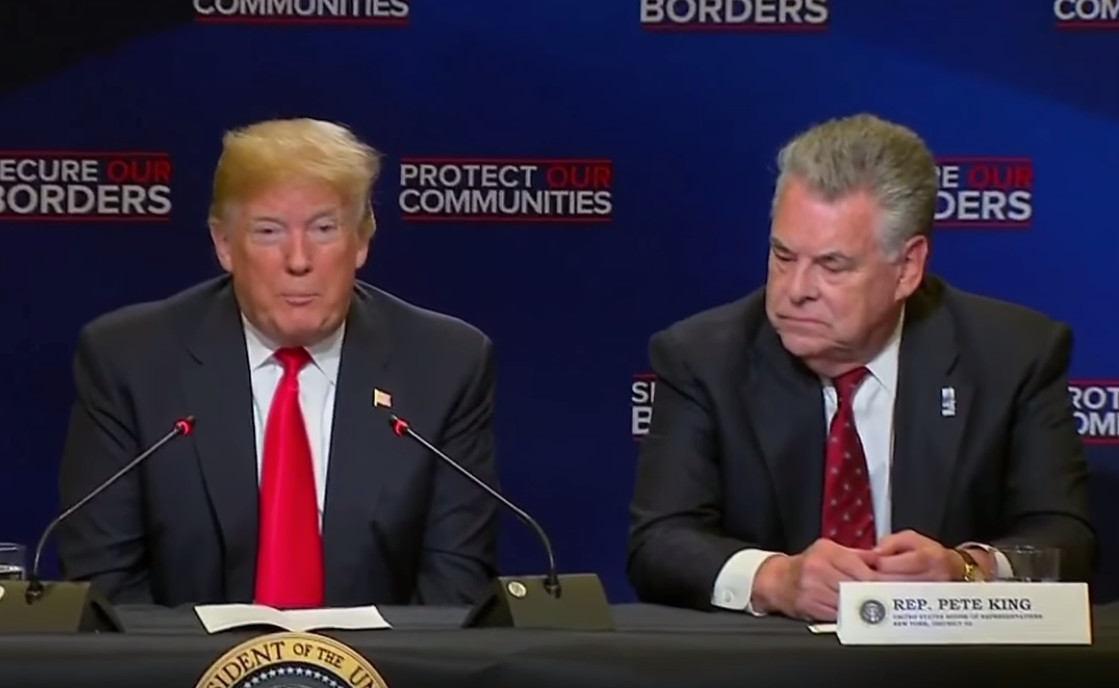 President Donald Trump joined Rep. Peter King, a Seaford Republican, at a forum in Bethpage on May 23 to discuss the threat posed by MS-13.
Youtube
By Eden Laikin

UPDATE: This story has been updated to how it appears in the May 31 edition of the Wantagh and Seaford Herald-Citizens.

Also sitting on the dais were the parents of three young girls from Suffolk County who were killed by MS-13 members in what officials believe may have been part of a gang initiation rite.

This was the president’s second visit to Long Island in less than a year. He came to Suffolk County last July to speak about his plans to eradicate the “menace” of MS-13 by arresting or deporting every purported member of the gang.

Trump said that the country’s immigration laws need to be toughened. “We have the biggest loopholes of any country in the world — the worst immigration laws — and MS-13 members have exploited loopholes in our laws,” he said, offering examples of murders, disfigurements and sex trafficking perpetrated by gang members on Long Island and across the country. “Kill, rape and control. That’s MS-13’s motto, and they live by it.”

“Crippling loopholes in our laws have allowed them to infiltrate our community,” he added, “and the Democrats in Congress refuse to close the loopholes — including the catch and release. You catch them, release them, and they are supposed to come back for trial. They don’t come back.”

Trump claimed that congressional Democrats, including House Minority Leader Nancy Pelosi, are “trying to defend MS-13,” and stood by his earlier characterization of gang members as “animals.”

The forum came amid a renewed White House push for Congress to enact the president’s immigration agenda.

Ryder told Trump that he spoke for all of the officers in his department, and across Long Island, when he said, “We know we have a president that has our backs and supports us every day.”

Ryder said that there are an estimated 500 identified members of MS-13 in Nassau County. In 2017, six “kids” were murdered in the county by MS-13, he said: “One was shot in the face, one in the back of the head, four were violently butchered by machetes and buried in shallow graves. Three were just 15 years old. Two were 18.”

Seven of the nine gang members arrested for the killings were undocumented, Ryder said. “Ninety percent of the crime is done by 10 percent of the population,” he said. “We need to go out in an intelligence way to attack this. We have great partners in Homeland Security and with ICE and the district attorney,” he added, referring to U.S. Immigration and Customs Enforcement. “What I’d like to see is better intelligence sharing . . . starting at the border.”

“We need to reach these kids now before the gangs approach them,” Ryder said. “Most murders are part of a gang initiation.”

“We’ll look to you for all that help, sir,” he told the president.

Trump introduced the parents at the dais by saying, “They know the threat as well as anybody, as they’ve suffered unspeakable grief.”

King told Trump, “You are doing more than anyone in the country in highlighting MS-13 as the horrible, vicious, rotten murderers they are. Thank you for doing this and mobilizing these resources . . . It’s the most important issue facing Long Island. Nobody at your level has ever given this much attention to it. [The protesters] can protest all they want — we’re with you.”

Trump called King, who is up for re-election this year, a “very good friend of mine for a very long time.” He also praised King’s understanding of gangs, and unofficially endorsed him.

“Nobody is running against you, are they?” the president asked King. “Nobody would be crazy enough to run against Peter King.”

Asked about King’s meeting with Trump, Shirley expressed concern that certain Democratic leaders, such as U.S. Rep. Tom Suozzi, were not invited to the roundtable discussion.