Owners plan to sell all assets; rink will remain open 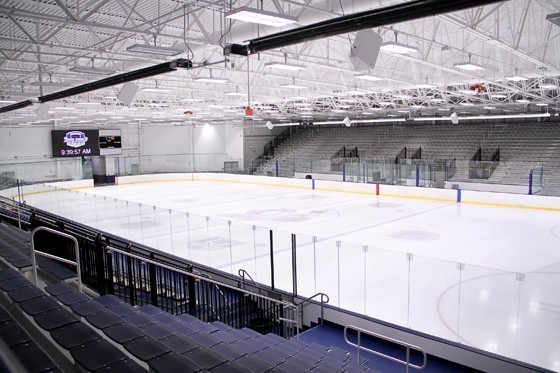 The Blue Rink is one of two NHL-sized indoor ice skating rinks at the Twin Rinks Ice Center. On Monday, its owners filed for bankruptcy, just 14 months after it opened.
Susan Grieco/Herald
By David Weingrad

The company that owns Twin Rinks — an ice skating facility in Eisenhower Park that opened just over a year ago — has filed for bankruptcy and plans to sell all its assets, But indicated that the facility will remain up and running until new ownership takes over.

Joel Friedman, a member of Twin Rinks at Eisenhower, filed for Chapter 11 bankruptcy on behalf of the company on June 8 in United States Bankruptcy Court for the Eastern District of New York, in Central Islip. He cited construction issues that led to overblown costs for the two-story, 165,000 square-foot facility. “The unfortunate reality is that the construction costs ended up being too high and we blew our budget,” said Friedman.

Twin Rinks at Eisenhower is a limited liability company that owns a 50-year licensing agreement with Nassau County to operate the ice center. “There wasn’t enough money left over to help with the startup costs,” Friedman said.

Construction of the ice center began in April 2013, and it opened to the public one year later. Housing two NHL-sized indoor rinks and one, smaller outdoor rink, Twin Rinks has since hosted youth hockey leagues while offering skating lessons and other entertainment.

Friedman stressed that all activities will remain in place during the bankruptcy process and all commitments will be honored. “The doors are open,” he said. “The staff is still here. The programming is still available. If you signed up for any of the programming or have a birthday party, that all still continues with business as usual.”

Interested purchasers can place bids on the company’s assets — which, Friedman said, includes the licensing agreement with the county — until July 1, according to court records. An auction for qualified bidders vetted by the court will take place on August 3.

Nassau County Attorney Carnell Foskey said the county has retained retained bankruptcy counsel “to ensure that taxpayers receive the benefit of this new, privately-financed multi-million dollar facility for public use.”