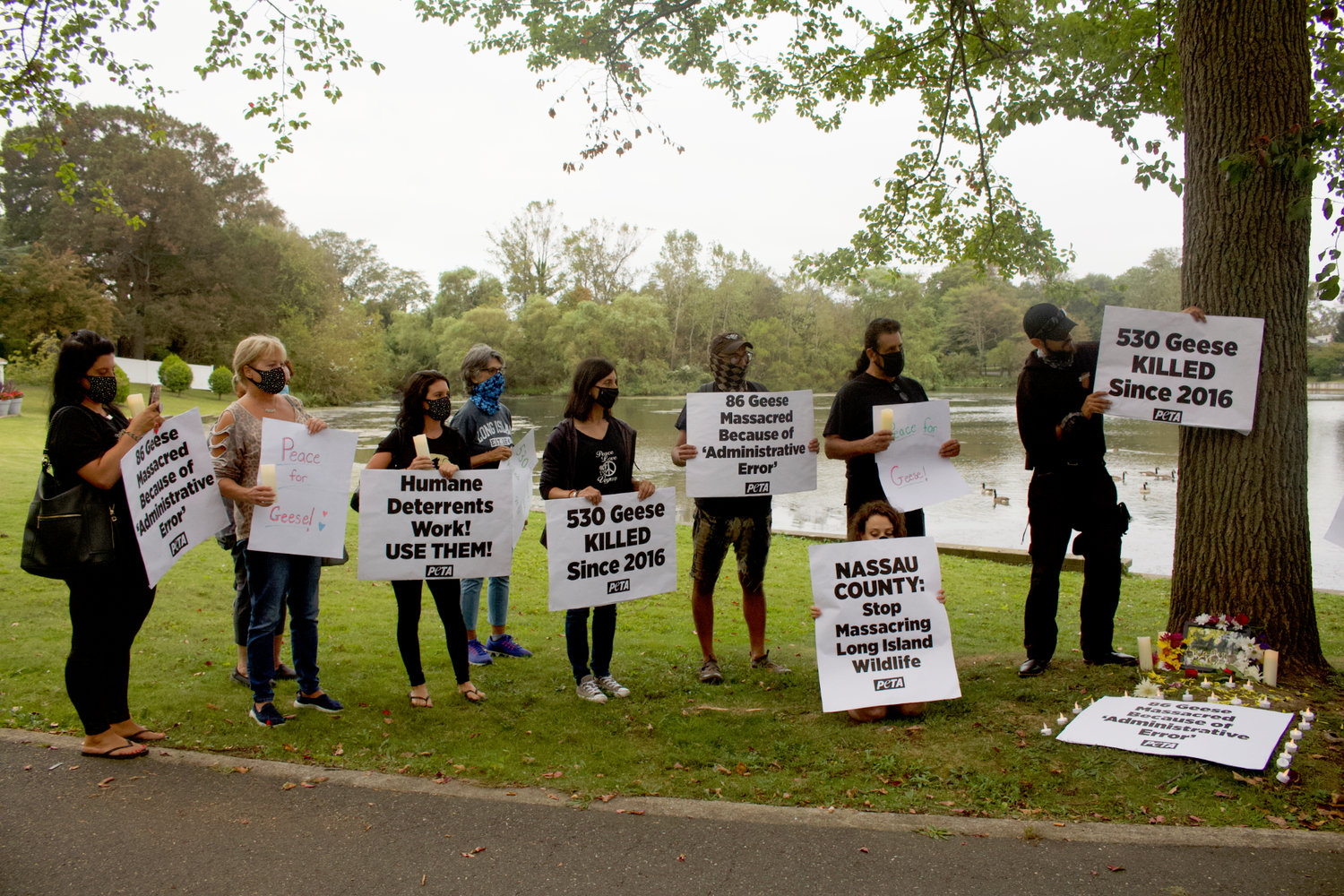 Dozens of local residents and animal rights activists gathered in Milburn Pond Park in Baldwin on Sept. 9 for a vigil to pay tribute to the 86 Canada geese that were removed by a federal agency, in error, in June and later killed.
Bridget Downes/Herald 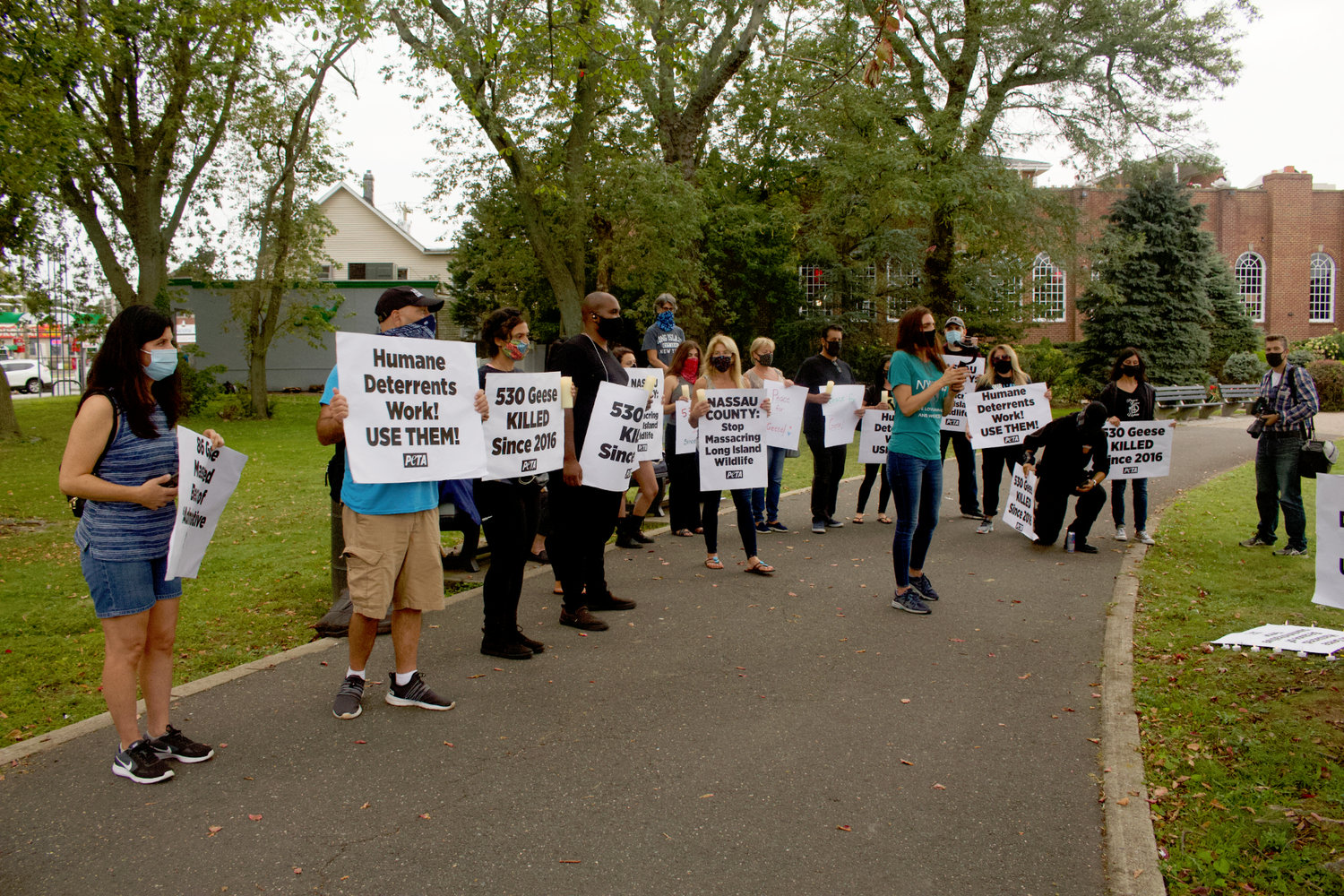 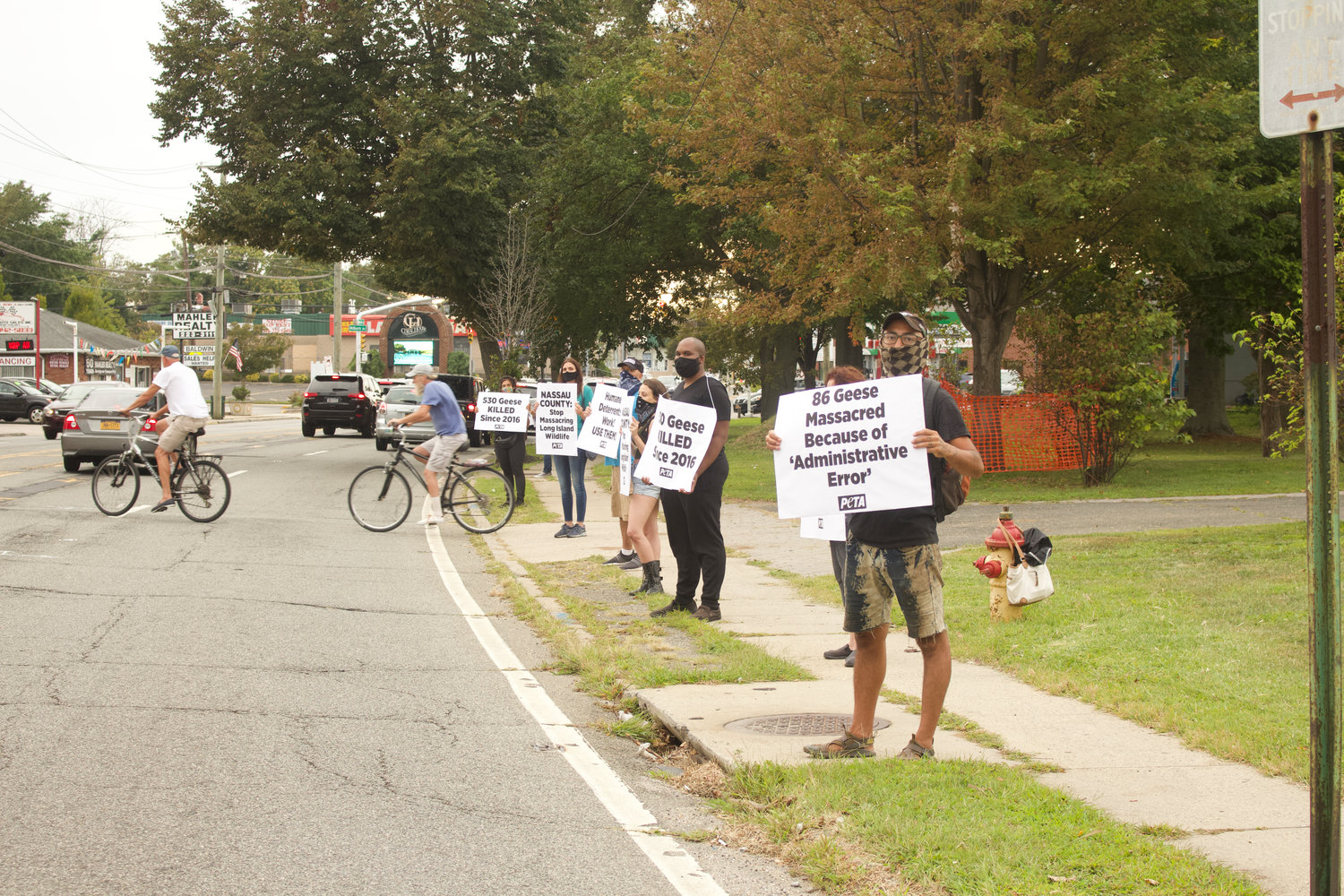 People held up signs to spread awareness of the killings.
Bridget Downes/Herald 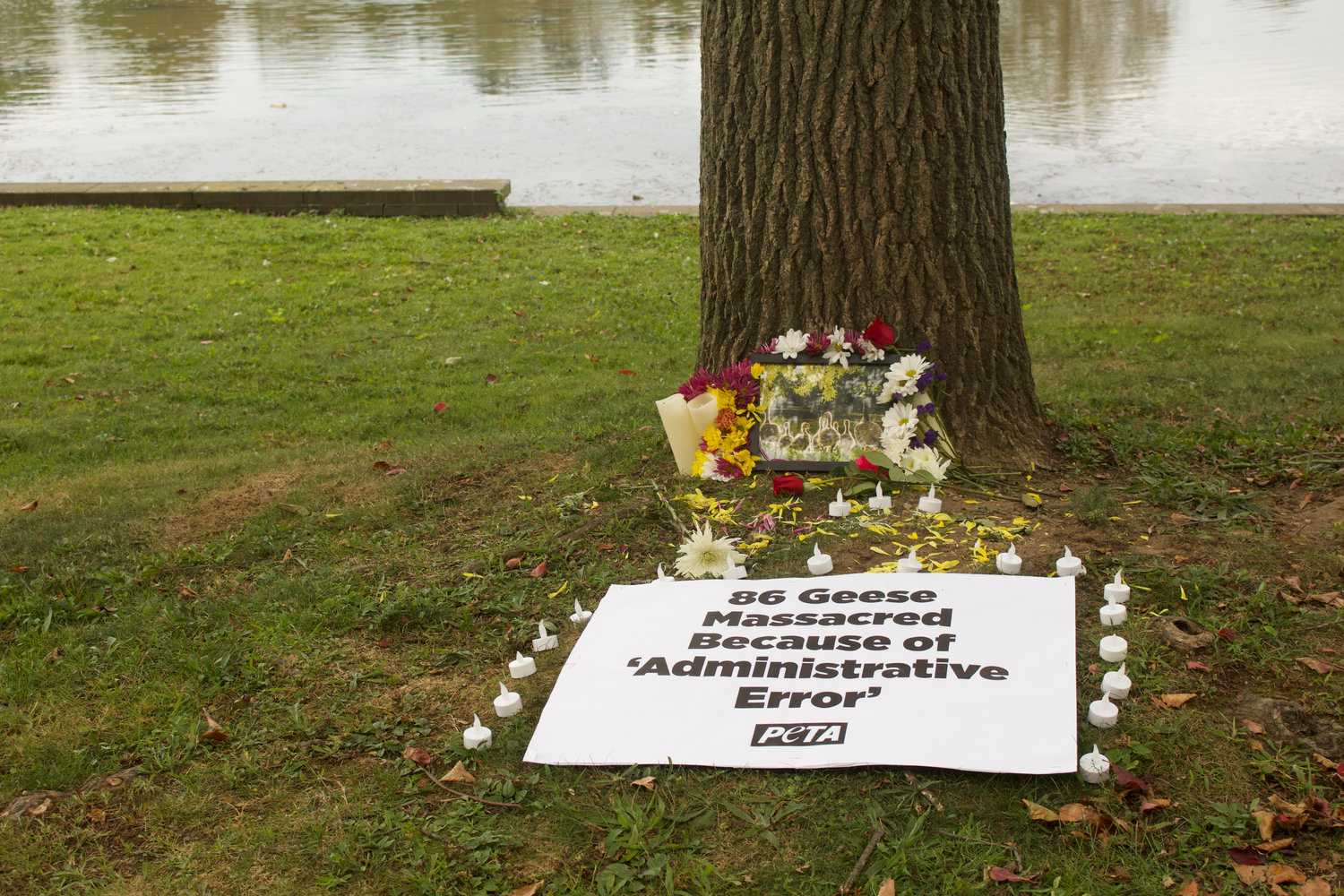 The vigil paid tribute to the 86 geese that were removed and killed this summer.
Bridget Downes/Herald 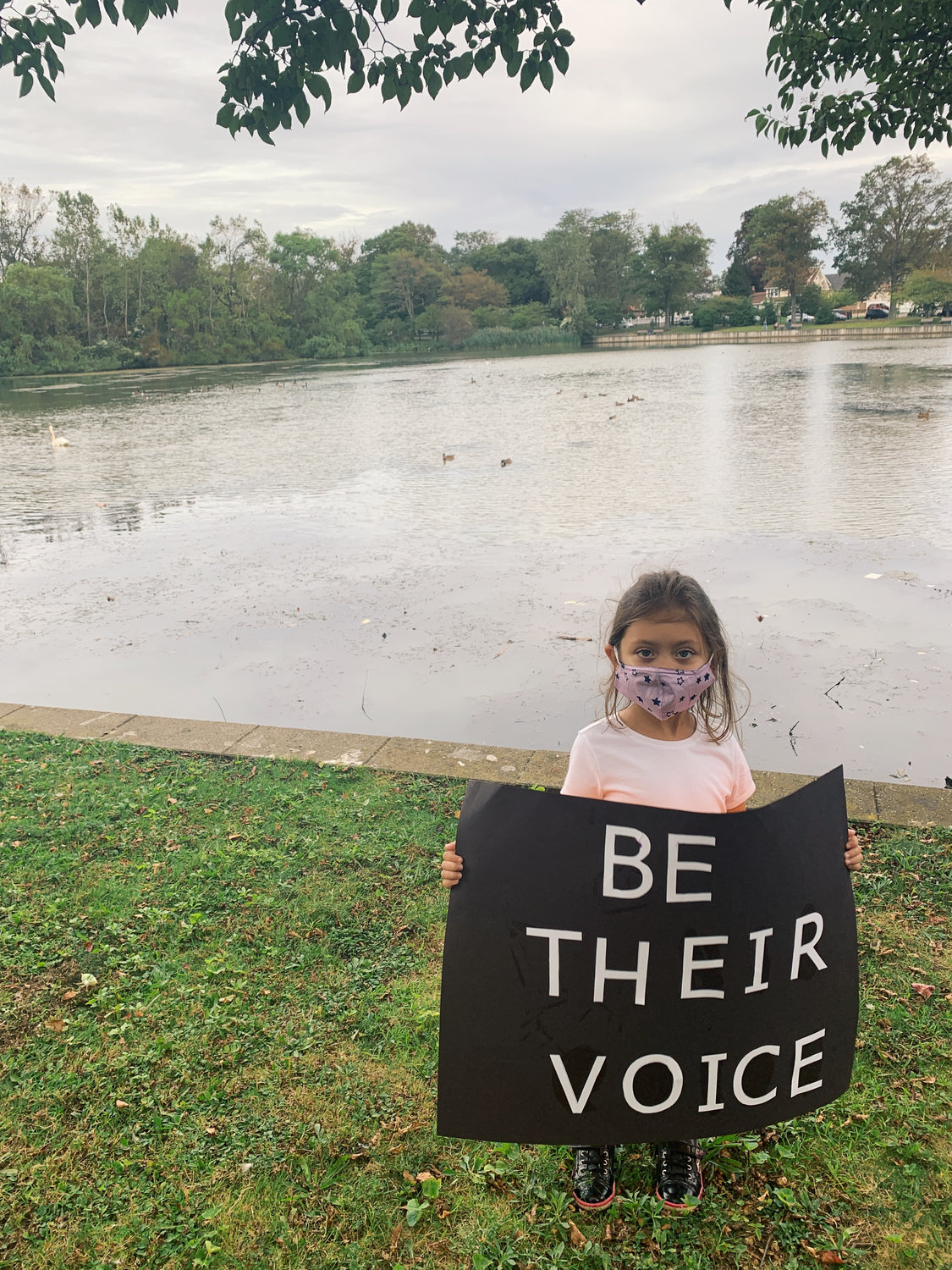 A young participant, Olivia, attended the vigil and shared her concerns about the geese.
Courtesy Chelsea Callaghan
Previous Next

There’s humane ways to handle this. We’re not in the dark ages.”
Edita Birnkrant, executive director, NYCLASS
By Bridget Downes

Dozens of local residents and animal rights activists have denounced the recent removal by a federal agency of 86 Canada geese from Milburn Pond Park in Baldwin that were later killed. The agency said it was a mistake.

In a July letter to Nassau County, the U.S. Department of Agriculture’s Wildlife Services department confirmed the removal of the geese in June and apologized for what was called an administrative error. The same type of work has been undertaken at several other Nassau County parks that are located within seven miles of John F. Kennedy International Airport, officials said in the letter, with the goal to reduce the hazard to aircraft posed by the geese.

“When we reached out to the [county] Parks Department this year for Milburn Pond Park, it was with the understanding that it was a park within the seven-mile radius,” wrote William Wil-moth, assistant state director of the U.S. Department of Agriculture’s Animal and Plant Health Inspection Service, Wildlife Services. “However, we erred in this understanding and apologize for any confusion this may have led to within your department and with Nassau County residents.”

The park is about 11 miles from Kennedy Airport.

Dozens of people gathered by the pond, on Merrick Road, for a candlelight vigil on Sept. 9 to pay tribute to the geese, spread awareness and call on elected officials to implement humane wildlife management methods.

“There were 530 geese that were massacred at Nassau County parks since 2016,” said John Di Leonardo, senior manager at People for the Ethical Treatment of Animals and president of Long Island Orchestrating for Nature, a nonprofit that spans Long Island. “There were 86 [geese] here and over 100 in 2016, even though they’re no-where near the flight path. For this to happen, there’s so many people who would need to sign off on it. They need to propose a strategic plan. This was absolute carelessness, and it’s cruelty.”

Dozens of animal rights activists held up signs throughout the park and along the sidewalk to spread awareness of the removal and killings, and some motorists passing by honked their horns.

“It breaks my heart,” said Alberta Bonner, a neighbor whose house is a few feet from the pond, adjacent to Coral House, a caterer that overlooks the pond. The geese used to congregate in her backyard, but now, since they are gone, Mallard ducks gather in her yard each day.

“I had like 100 geese in my backyard every day, so when they disappeared one night, I noticed,” she said. It was 2016 when she realized about 150 geese were missing. “I saw a whole bunch of feathers, but no blood, and I was like, what happened?”

The geese that were found in Milburn Pond in 2016 — about 150 — were removed and later killed as part of a work order approved by the county.

“The United States Department of Agriculture made a routine request to enter Milburn Pond Park as part of their nest/egg management efforts under a five-year county agreement signed in 2016 by the prior [Edward] Mangano administration,” Nassau County spokesman Mike Fricchione said. “When it came to the county’s attention that the park was outside of the seven-mile JFK airport radius, the agreement was rescinded, and the error was brought to the attention of the USDA, which has since taken responsibility for the oversight.”

Di Leonardo, who frequently rescues at-risk waterfowl in local waterways, said the birds were molting their feathers when the team came in to remove them, and so were unable to fly away.

“I’m a licensed nuisance wildlife control operator in New York state, and as a professional, I will tell you that this is cruel and this is ineffective,” he said, adding that lethal management does not work because the next flock of birds sees an open pond and flies in. A few birds had already populated the pond by the day of the vigil.

“And you have the same problem, but is it really even a problem?” he asked. “These are native birds, this is native wildlife, who people enjoy having here. And even if we didn’t enjoy them, they’re their own individuals. They enjoy their lives.”

Di Leonardo said the removal and killings happen because the “deceptively named” Wildlife Services division is “a bunch of contract killers.”

“They charge counties and towns — municipalities — our taxpayer money to come in here and round up birds,” he said, “year after year after year, and they choose to use these short-term, ineffective and cruel solutions, because the more humane deterrents actually work better.”

Animal activist groups have stopped the slaughter of hundreds of geese around Long Island within the past few years, Di Leonardo said, including in North Hempstead, Ronkonkoma and Brightwaters.

“When people rise up, when people find out about it, community members are outraged,” he said, “and they usually do the right thing, but if we don’t hold our municipalities accountable, things like this happen.”

Edita Birnkrant, executive director of New Yorkers for Clean, Livable and Safe Streets, a nonprofit animal rights organization, who attended the vigil, said the actions taken by the USDA are tantamount to senseless violence and represent an antiquated model of geese control that does not work.

“NYCLASS strongly supports and demands an end to these senseless slaughters, and we really need to evolve our thinking — we have to coexist,” Birnkrant said. “The solution to everything cannot be to kill. There’s humane ways to handle this. We’re not in the dark ages.”

She said the slaughter of geese and other waterfowl is “such a short-sided, irresponsible, reckless decision” because residents visit natural places to observe wildlife, “and to make them devoid of these beautiful creatures is obviously unethical on many levels, but it’s also sort of reducing the quality of life for residents.”