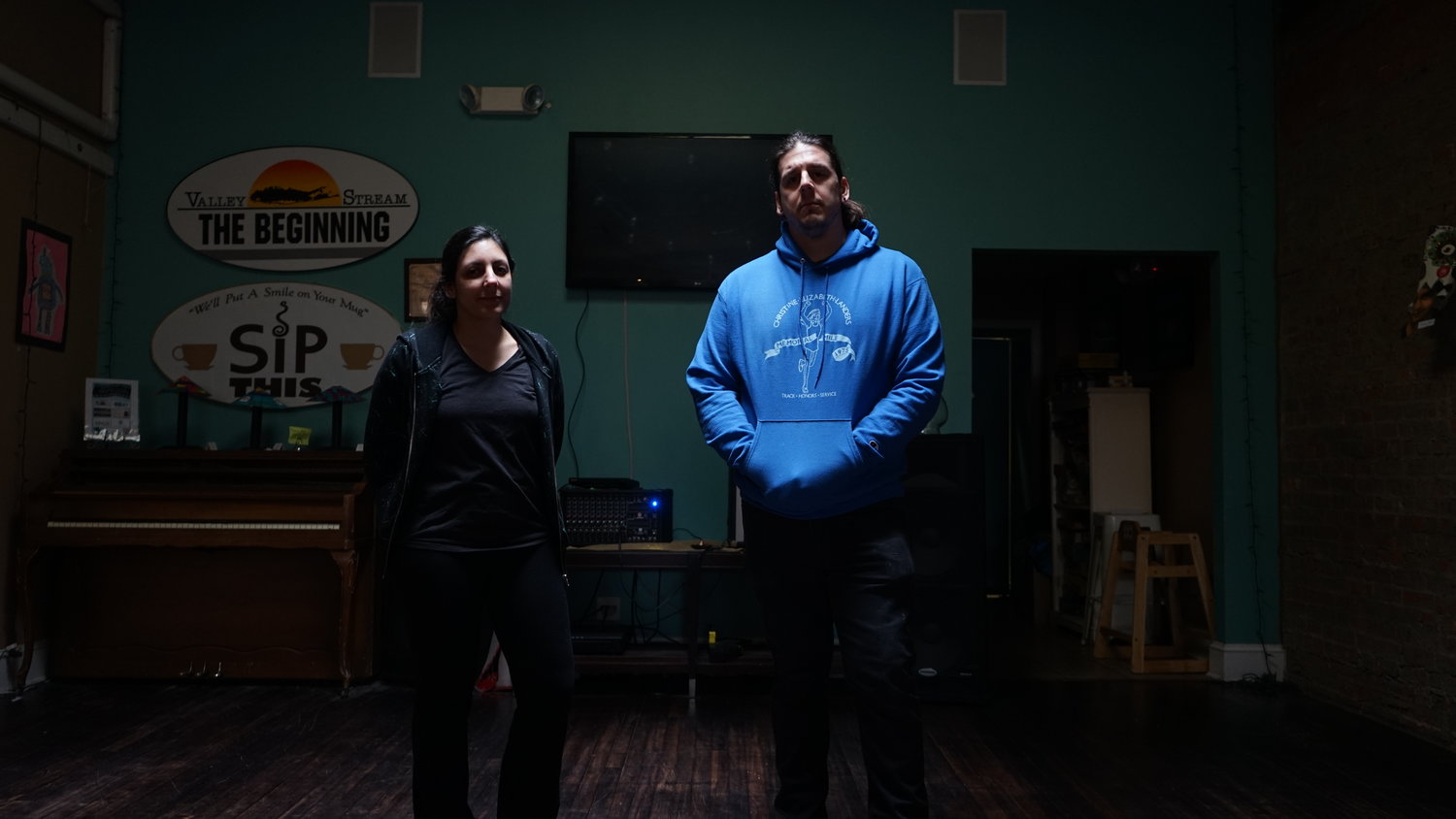 Sip This co-owner Stephanie Pontillo and manager Anthony Natoli. With a switch to takeout only, the coffee shop is already feeling the negative economic impact of the coronavirus pandemic.
Peter Belfiore/Herald
By Peter Belfiore and Nicole Alcindor

Tuesday was St. Patrick’s Day, and normally one of the biggest days of business for Buckley’s Restaurant and Bar, according to bartender Kenny Collins. With a pandemic looming, however, the Irish pub was facing a nightmare.

On Monday, all bars, restaurants and gyms in New York state were ordered to close indefinitely, except for takeout service. Collins’s mood was sour as he worried what the order could mean for the 51-year fixture in Valley Stream. Certainly, it would put a dent in business.

“No one wants to get alcohol to go,” he said.

The shutdown was made through an executive order by Gov. Andrew Cuomo in a bid to slow the spread of the COVID-19 strain of coronavirus, which as of press time on Tuesday had killed two people in Nassau County and infected 139. Additionally, gatherings of more than 50 people were banned. The full economic toll on local business was unlikely to be known for weeks, if not months.

“No one wants to close down, but it’s the right thing to do,” Collins said. “You don’t want people to get sick, so you do what you have to do.”

For food and alcohol establishments, takeout is the only exception. Bars, restaurants, distilleries and wineries are allowed to serve food and drinks, but people are not allowed to sit. The state’s liquor law is being temporarily changed to allow for off-premises sales of alcohol.

At Mitchell’s Restaurant, manager Vicky Sourgoutsis said she had already had to send home a dishwasher, a cook and two servers Sunday because of a lack of business. Now, she said she would have to discuss with the diner’s owner how it would transition to takeout and delivery only.

“We have no business now,” Sourgoutsis said on Monday. “We were hoping to hit some numbers for St. Patrick’s Day, but tomorrow will just be bad business.”

Frank Pontrelli, manager of Ancona Pizzeria & Restaurant, said he expected business to suffer, but that because of the danger posed by the disease, he sympathized with people and their loved ones who had been or will be infected.

“I hope this ends as fast as possible, so we can resume with our lives,” he said. “If today is any indication of how business is going to be moving forward, then it’s not going to be good.”

The coffee shop Sip This was proactive, moving to takeout-only on Sunday, before the governor’s announcement.

“We made the switch for our workers and customers,” manager David Notarbartolo said. “We wanted to make sure we were being as safe as possible.”

But as a local hangout, he explained, much of Sip This’s business is generated by customers sitting for hours, buying coffee and food as they work on various business and school projects. Even before Sunday, as word of the pandemic spread, he noticed a sharp downtick in customer traffic.

The outbreak has forced Sip This to cut back on staffing hours, Notarbartolo said, raising concerns about employees who rely on jobs there as their chief source of income.

“Fortunately, many of the workers at Sip This are college- or high school-age, and they’re just trying to make an extra couple of bucks to buy things like an Xbox,” he said. “We’re aware of the workers who need the money to pay bills, and we’re making sure to schedule them.”

With that in mind, he said he is trying to preserve those employees’ hours as much as possible amid the shutdown.

Scott Brinton contributed to this story.