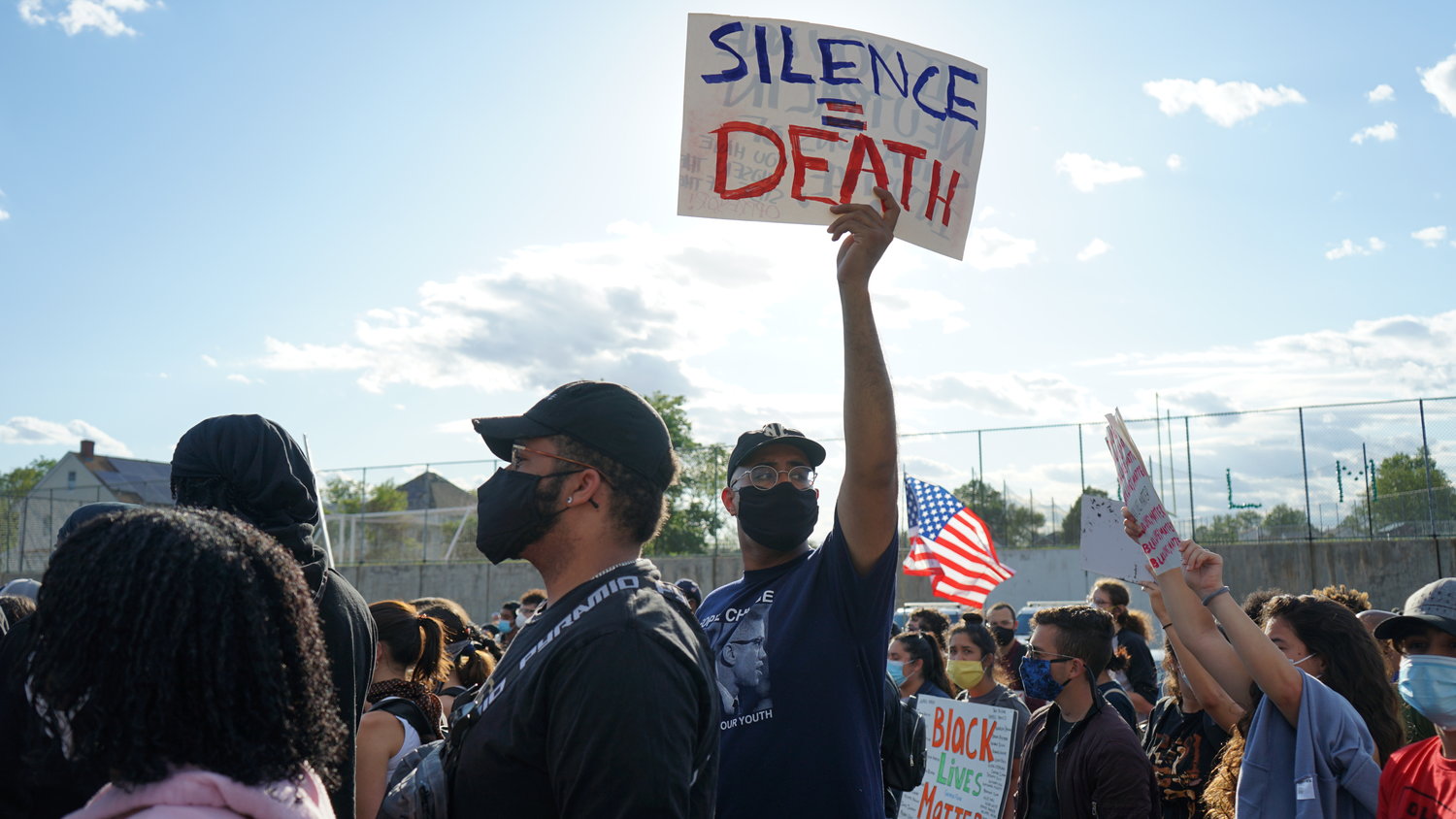 Hundreds in Elmont and Valley Stream hit the streets on Monday to protest the death of George Floyd and police violence against black people.
Peter Belfiore/Herald 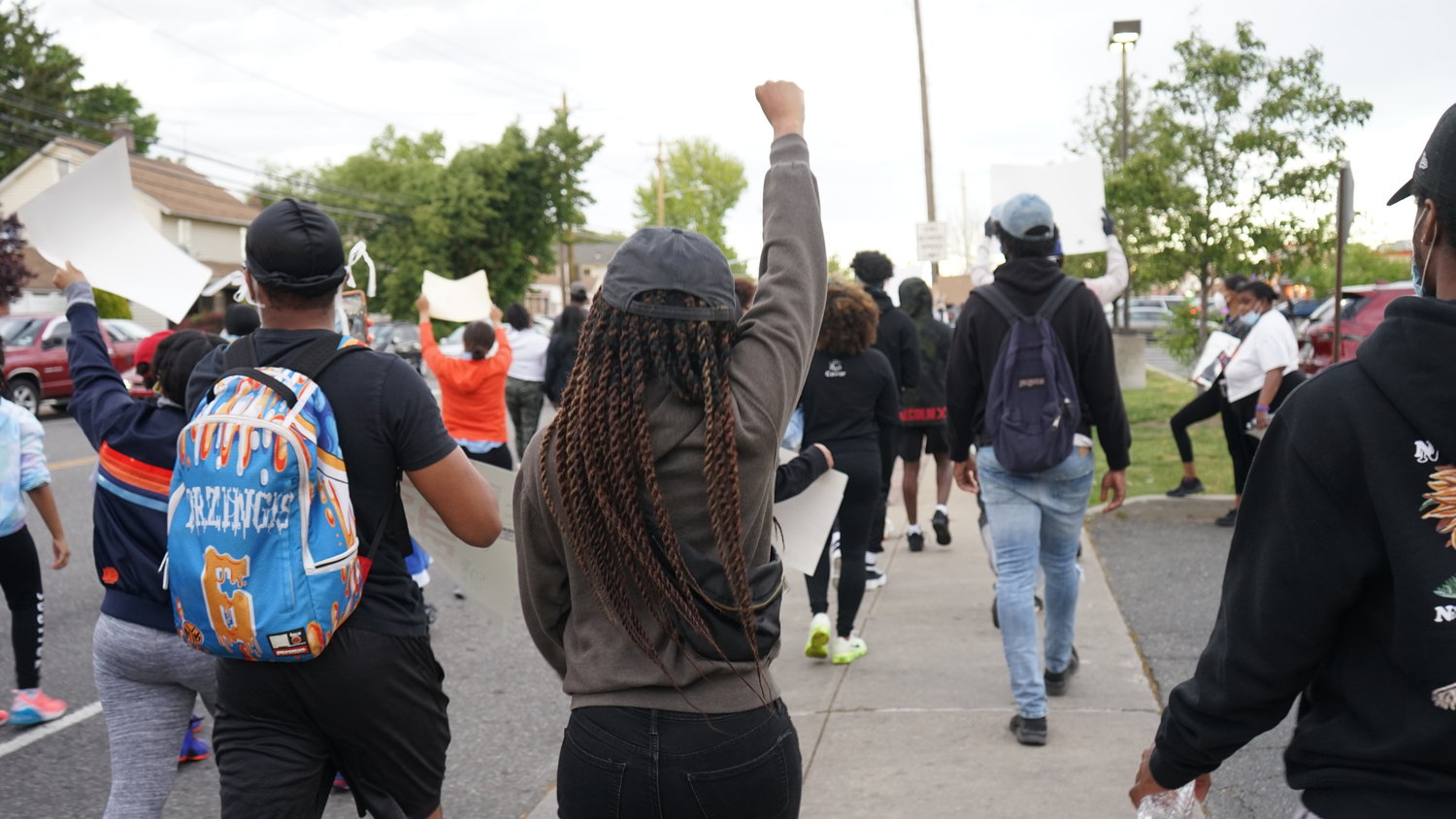 The protestors marched from the corner of Dutch Broadway and Elmont Road to Valley Stream State Park.
Peter Belfiore/Herald 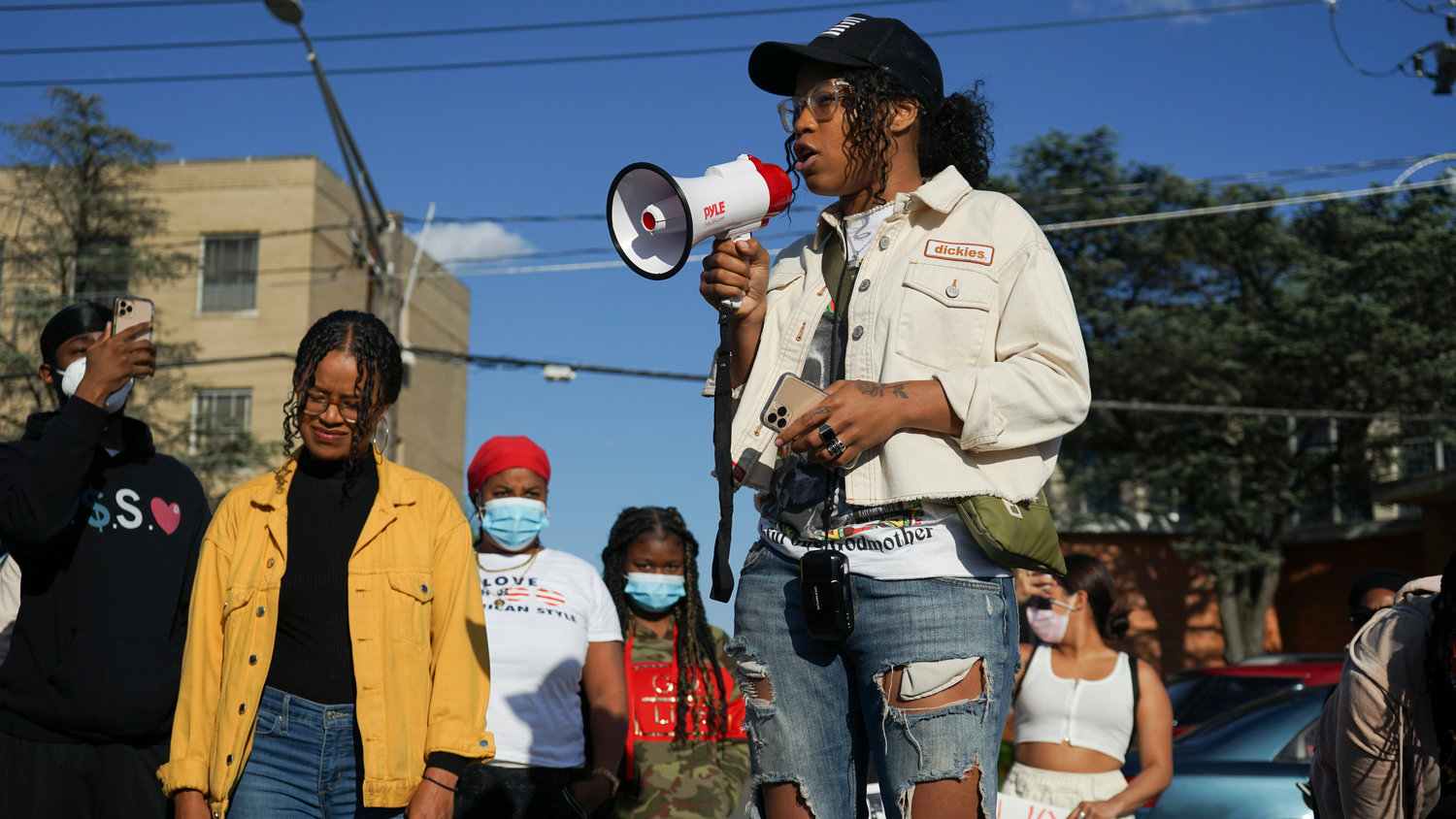 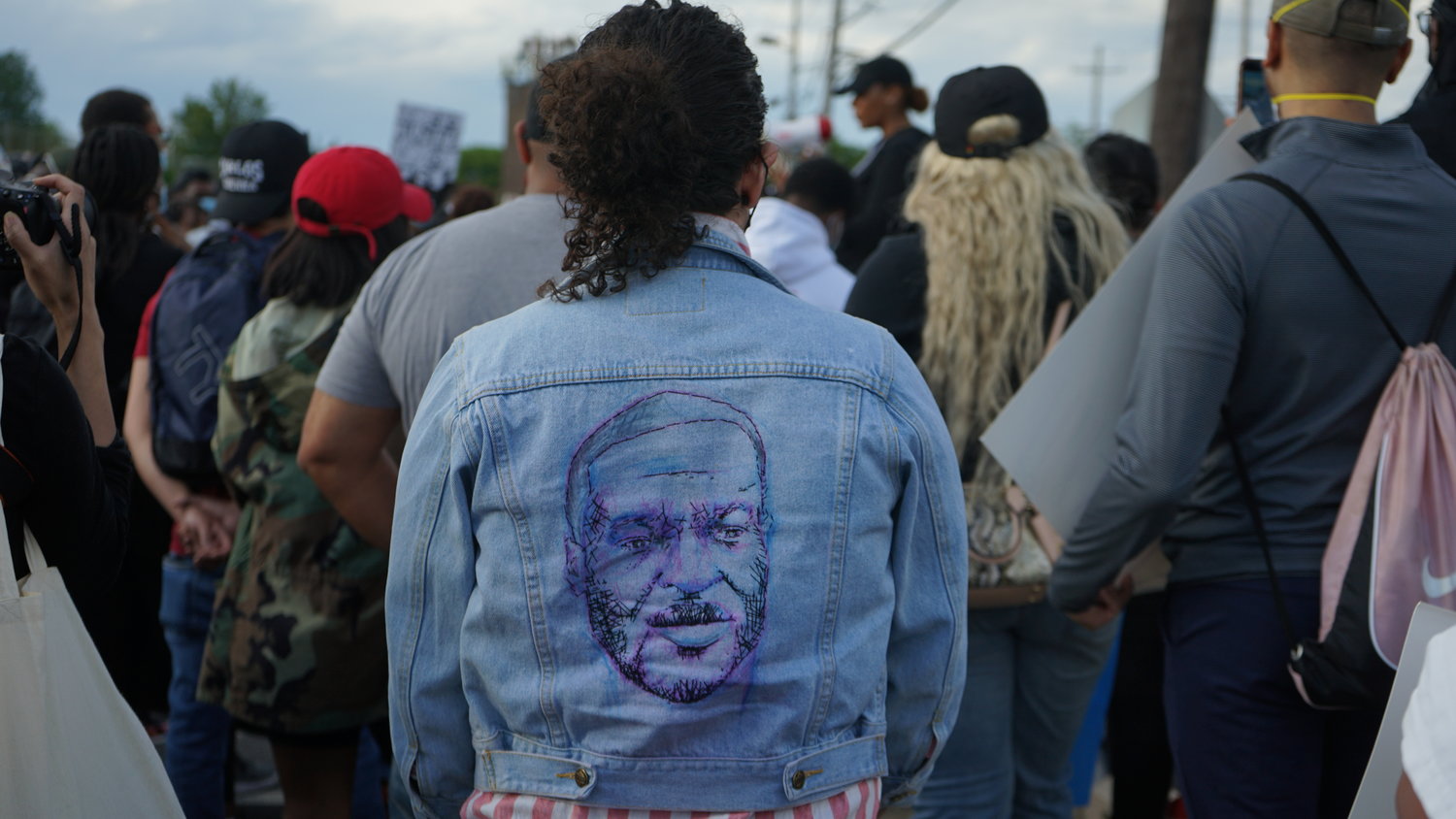 While Monday's protest addressed racial injustice in America, it was sparked by the killing of George Floyd while in Minneapolis police custody.
Peter Belfiore/Herald 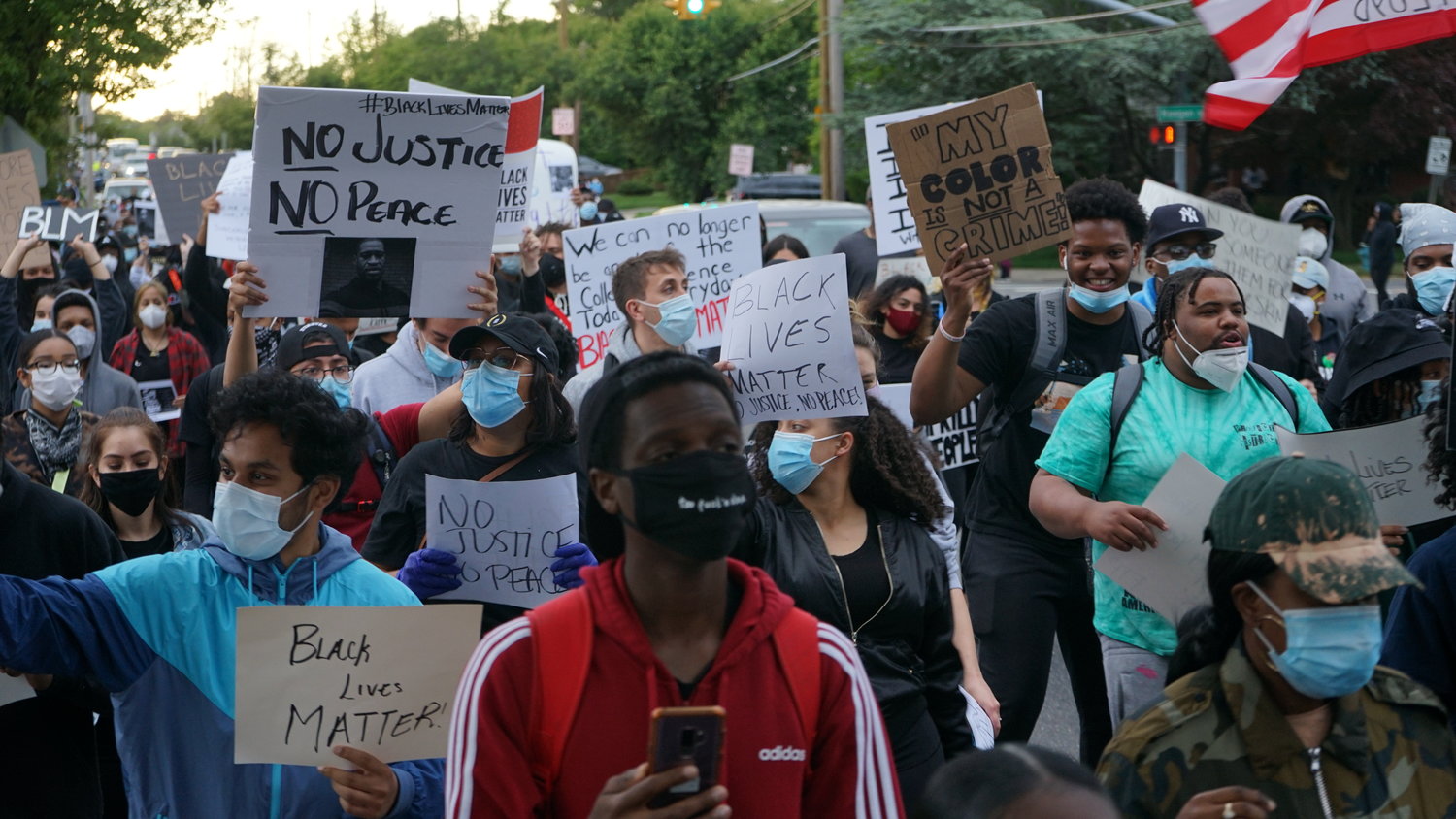 Throughout, protestors shouted the names of black people killed by police.
Peter Belfiore/Herald 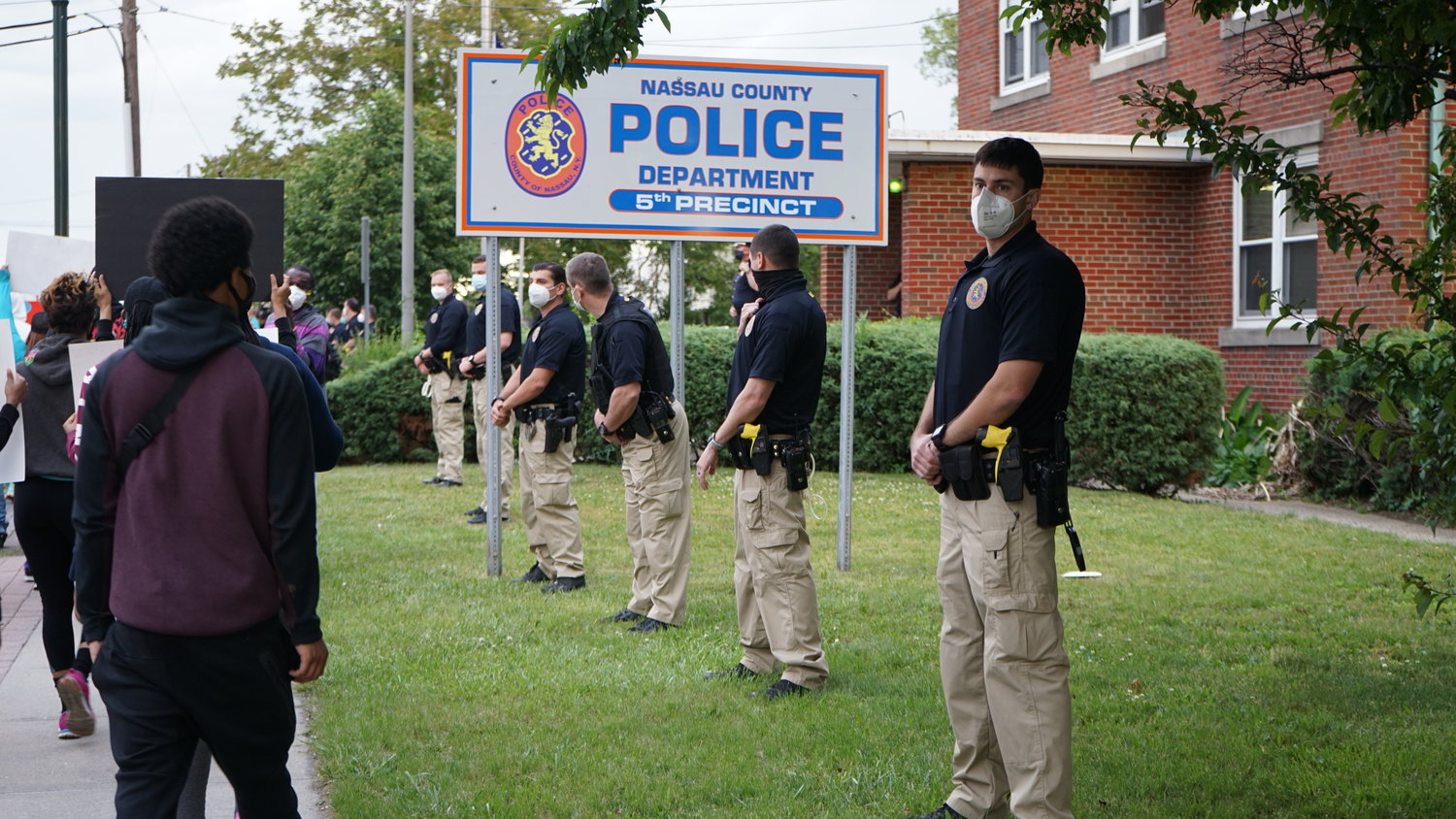 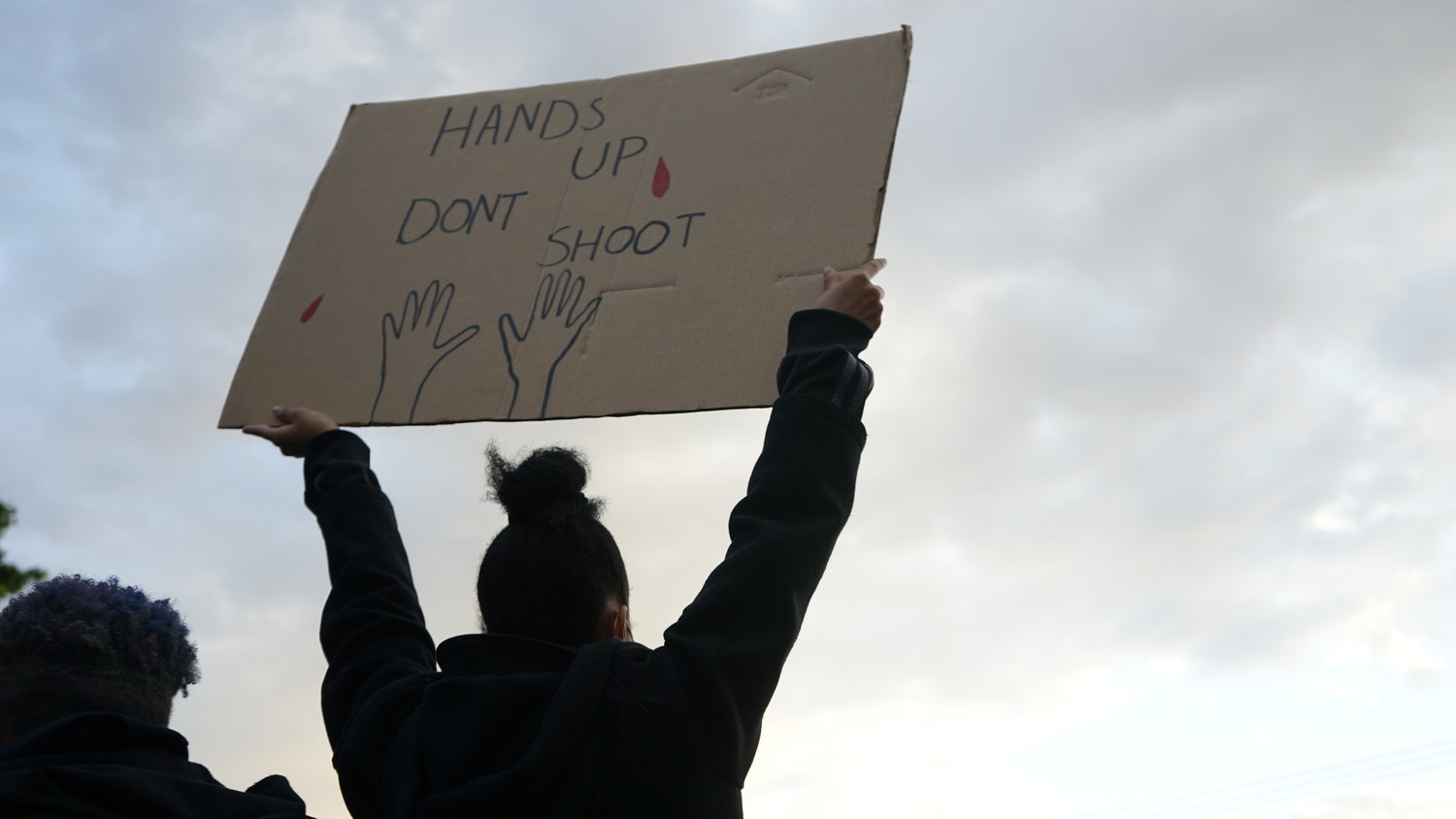 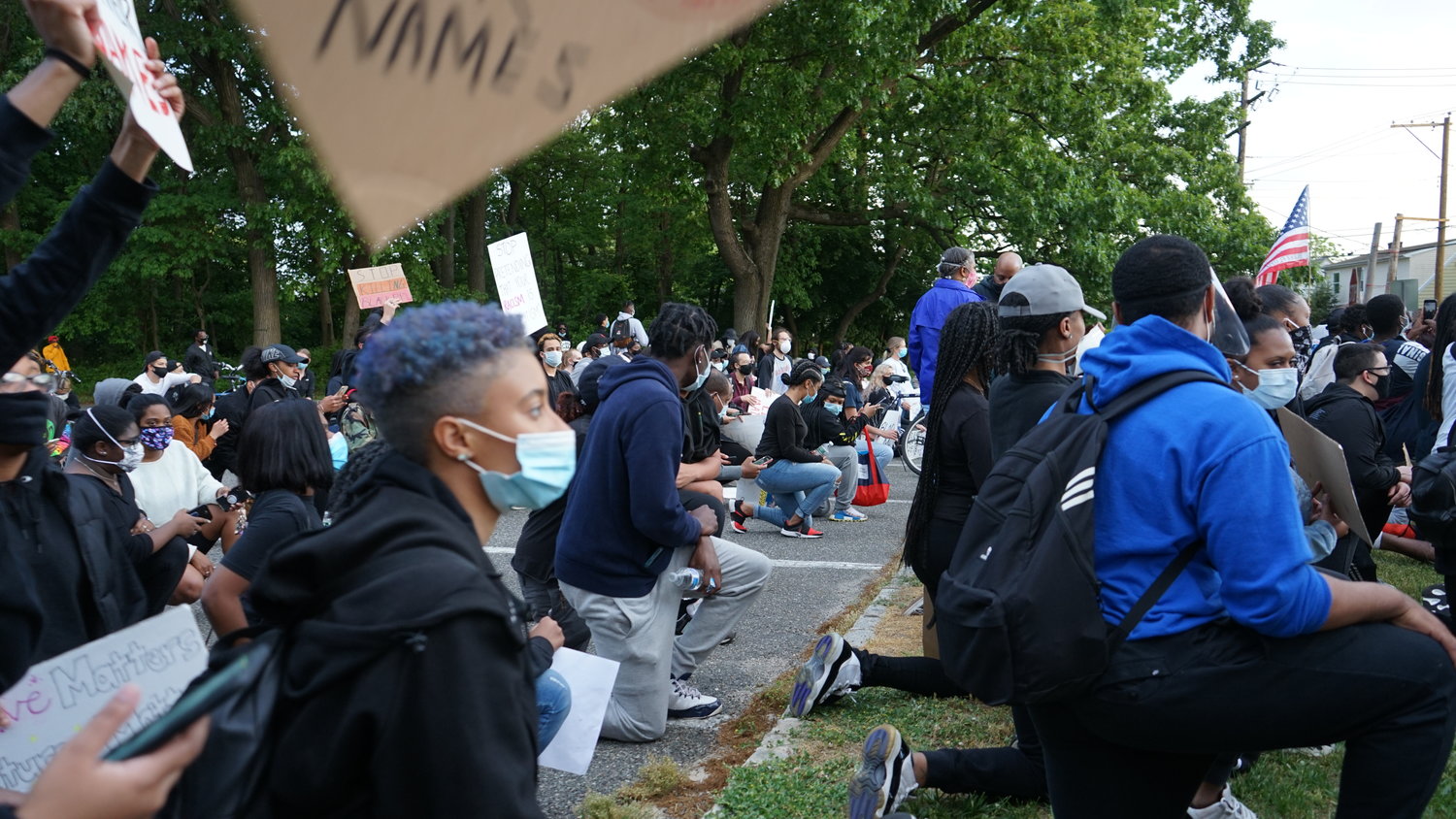 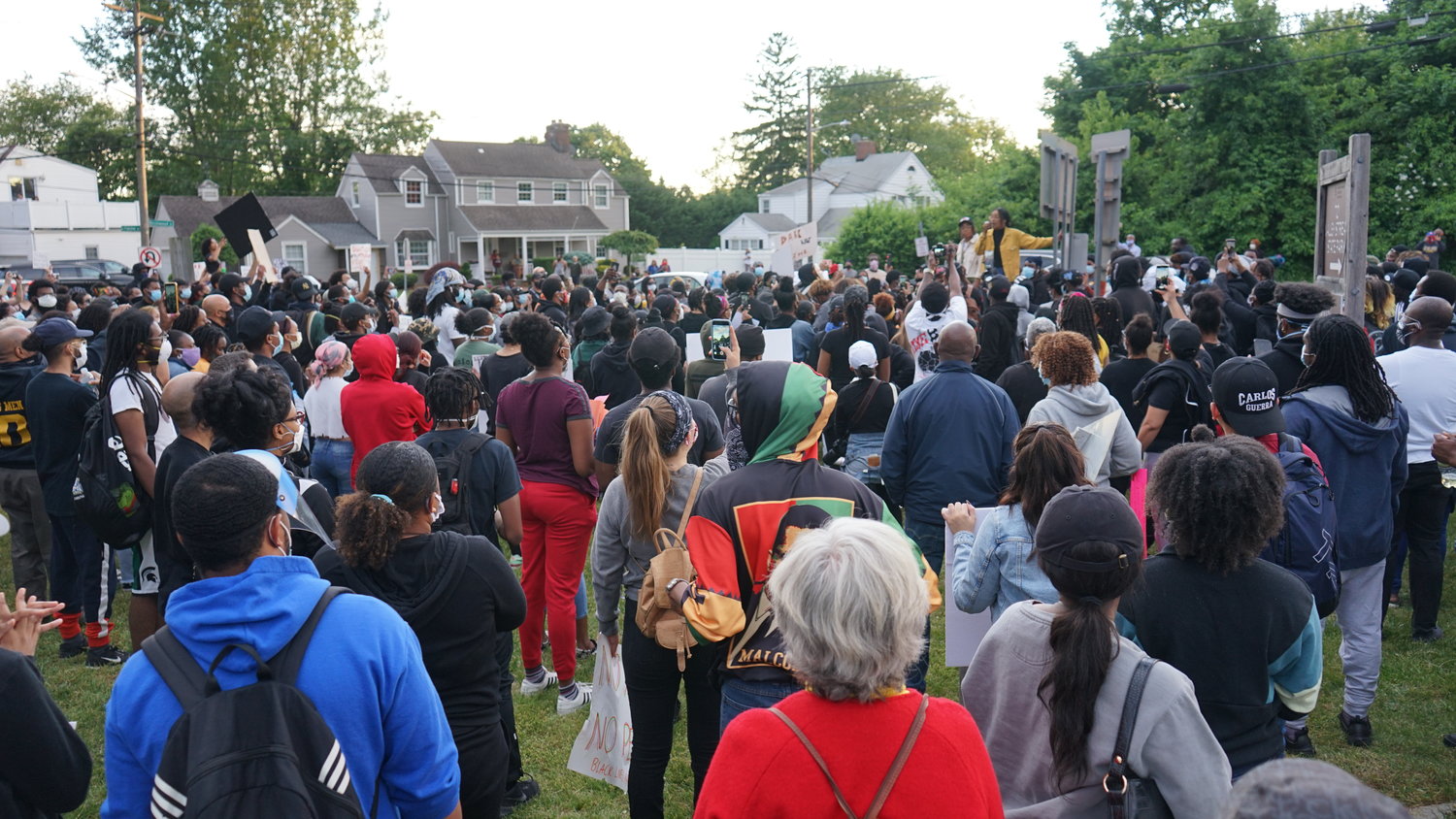 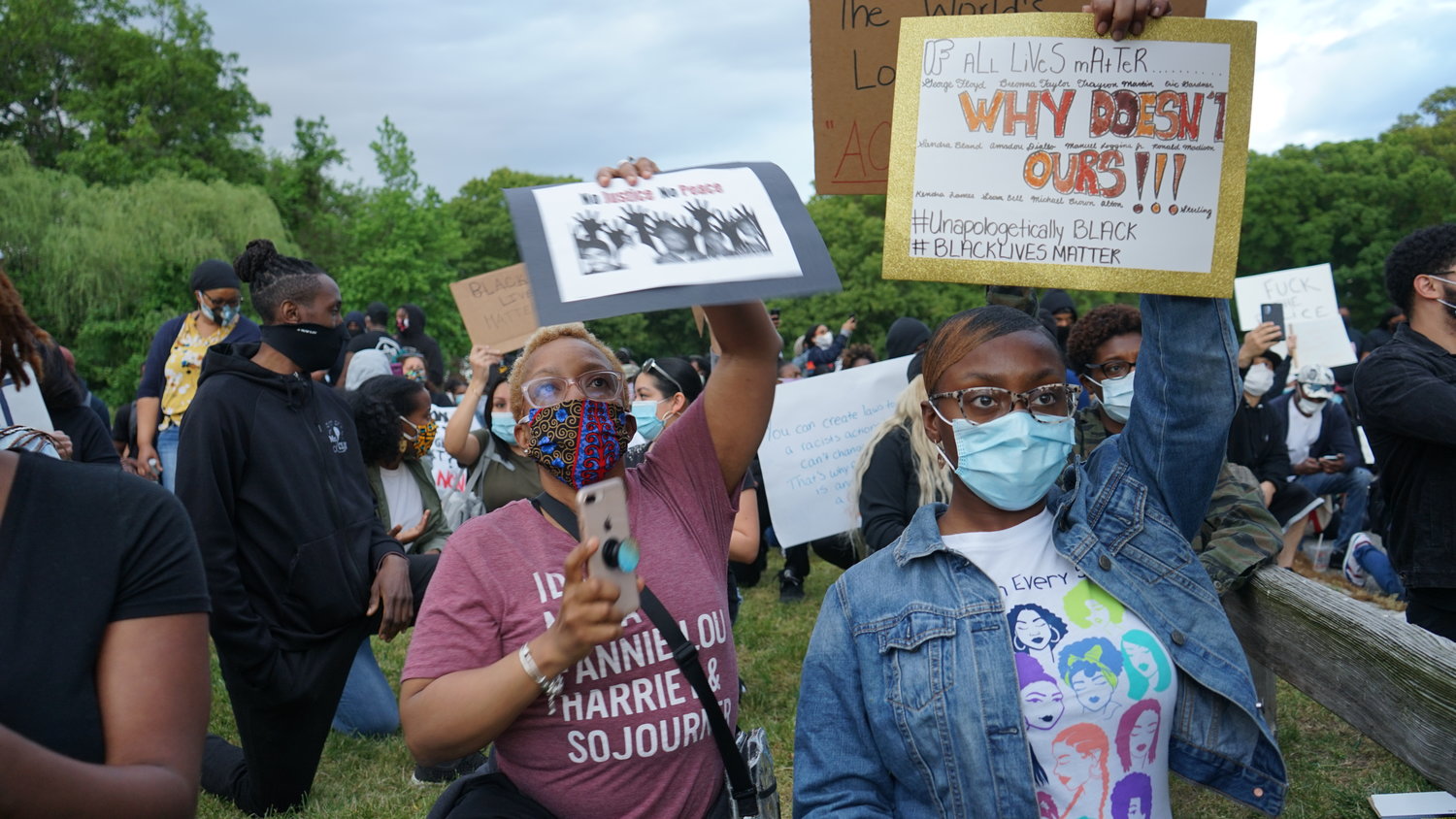 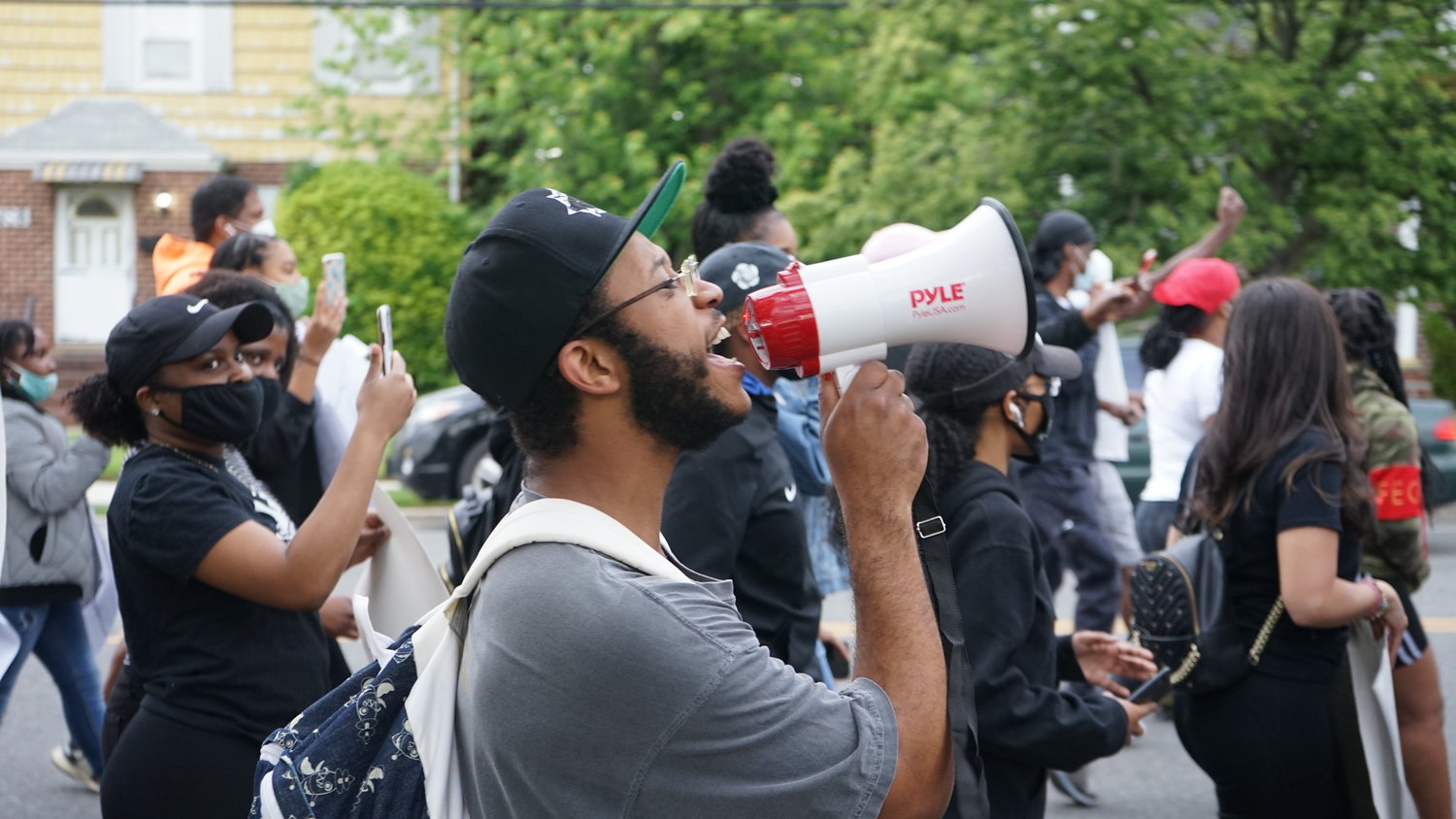 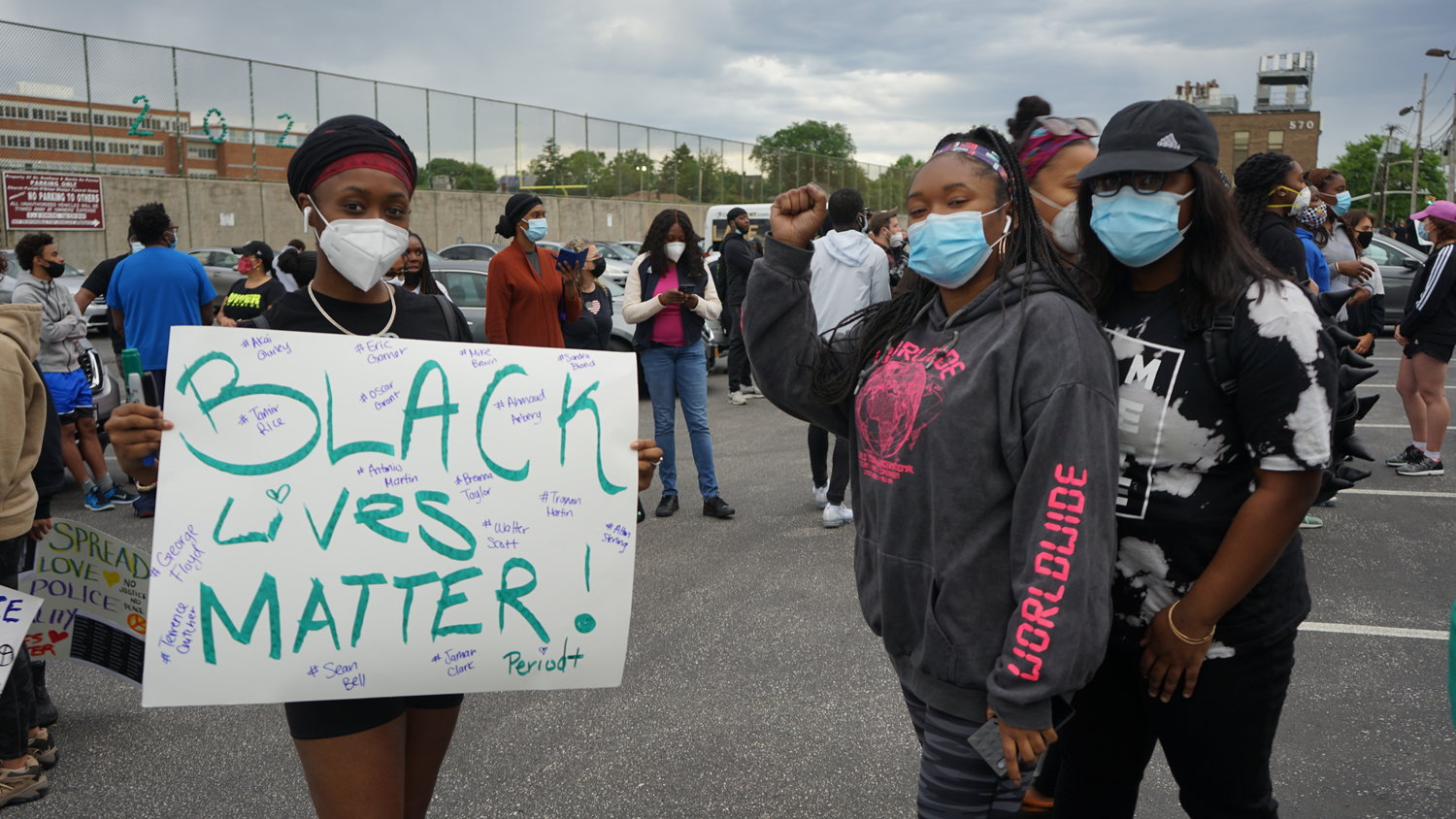 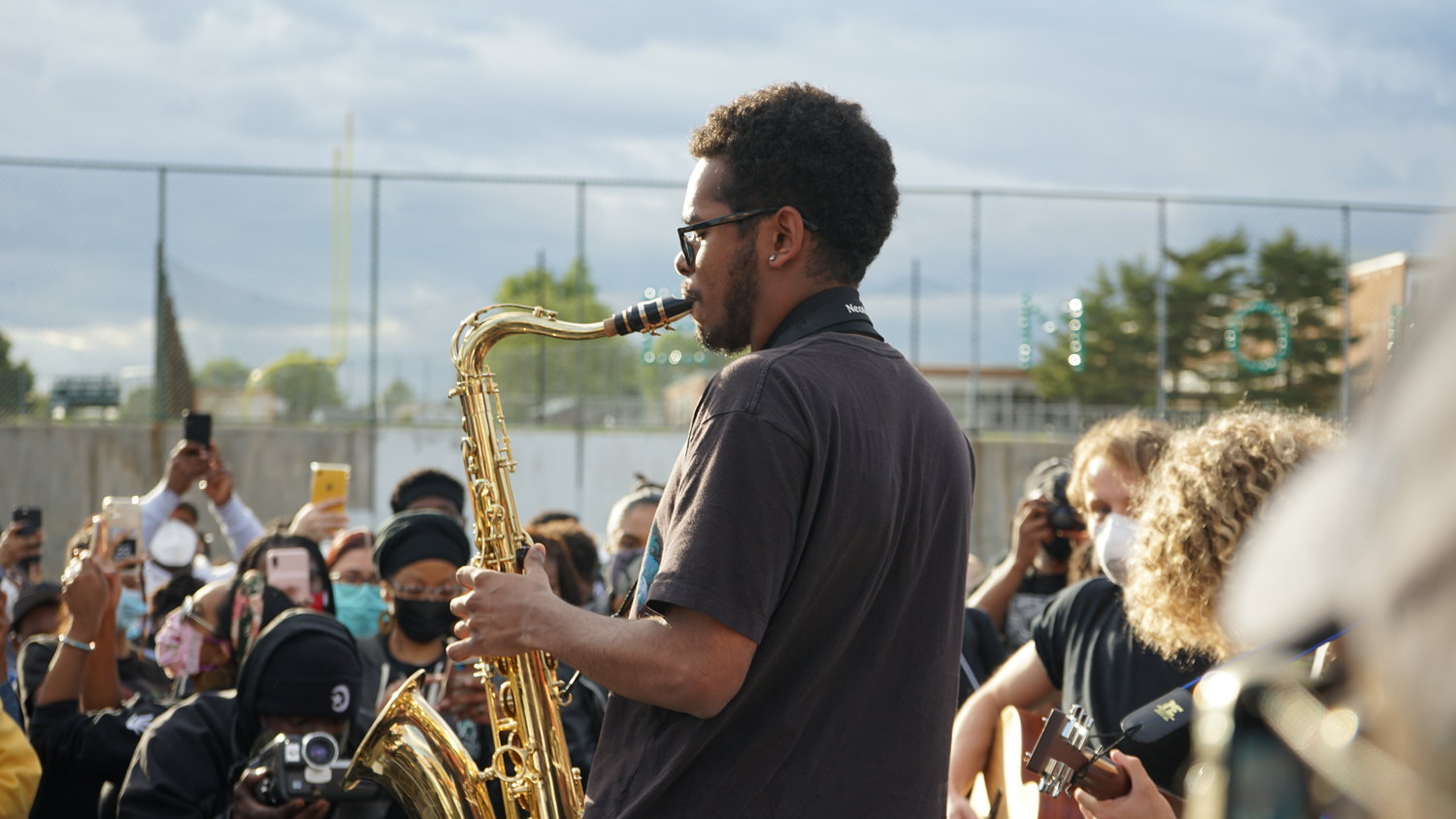 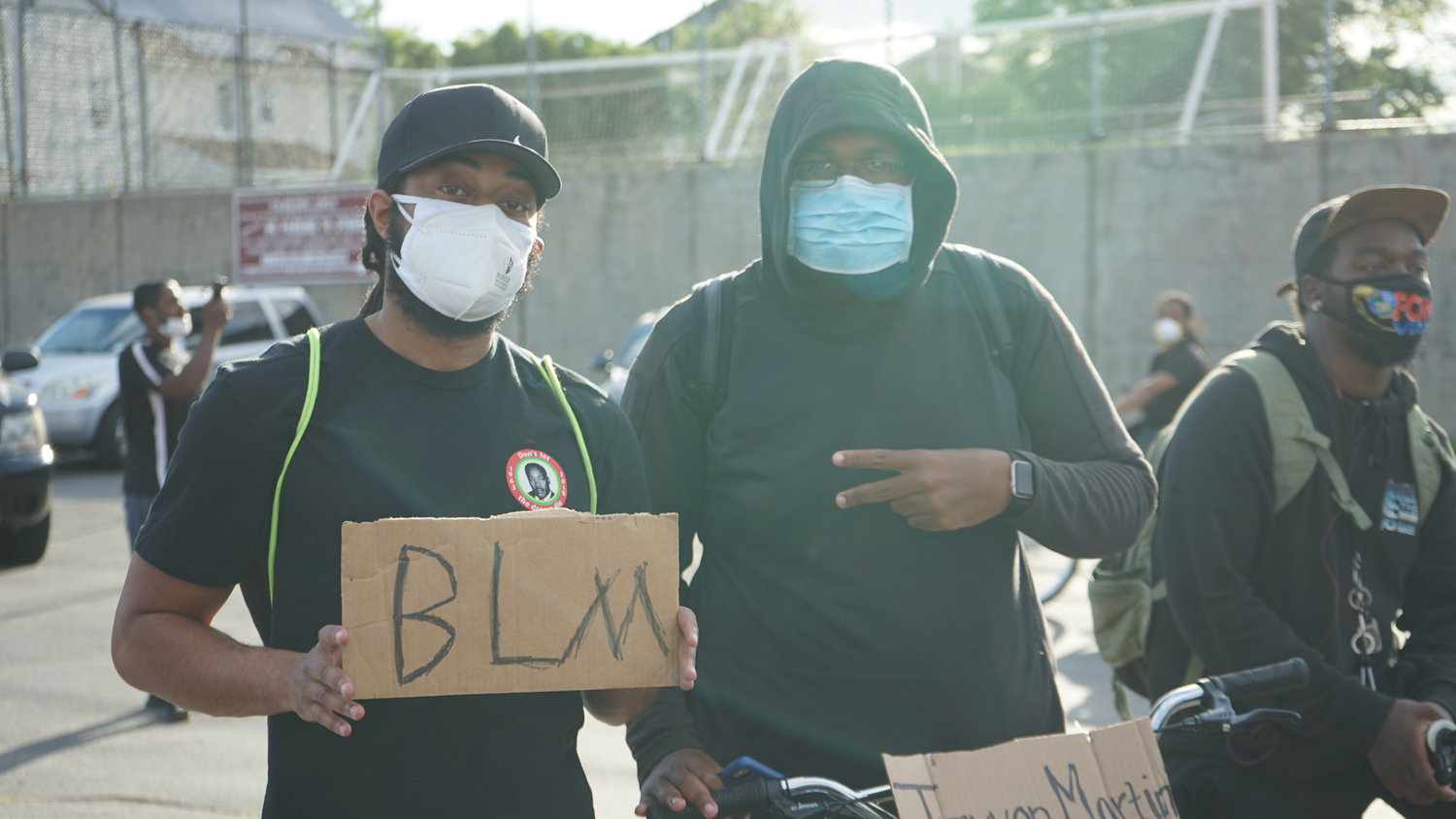 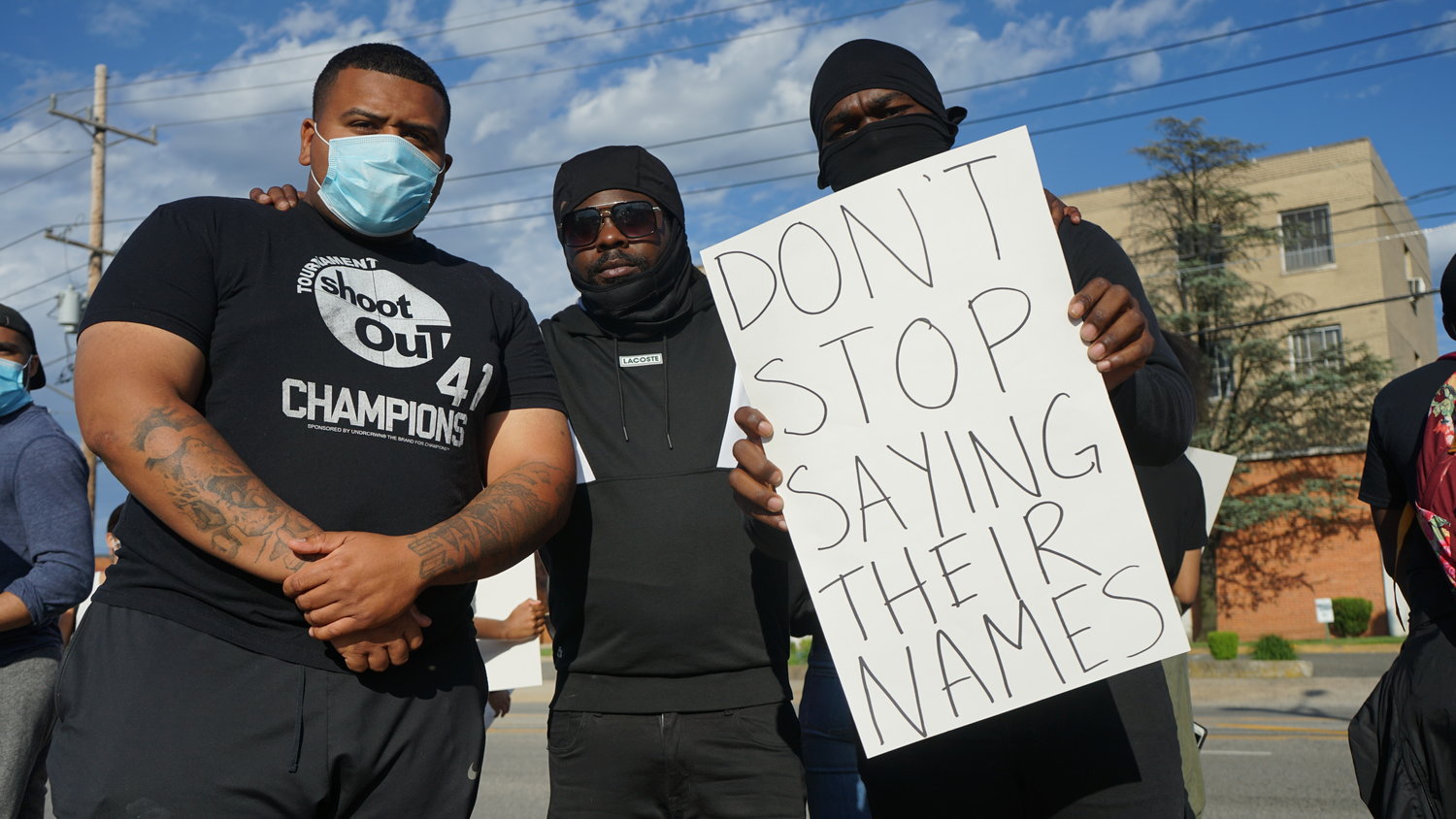 Their names were on the protesters’ minds and lips for most of the evening Monday:

- Breyonna Taylor, shot eight times in March in her own home when police entered without warning.

- Ahmaud Arbery, shot while on a jog the month prior after two white men pursued him in a pickup truck.

- Eric Garner, who died after shouting that he could not breathe as police arrested him.

- Sean Bell, killed in a hail of gunfire in 2006 by plainclothes NYPD officers.

- George Floyd, who died last Monday after Minneapolis police officer Derek Chauvin pressed his knee to Floyd’s neck for more than eight minutes as Floyd pleaded for his life.

In Valley Stream and Elmont, hundreds marched in their memories, exactly a week after Floyd’s death. It took place against a backdrop of national outcry over police violence against black people, and while some of the protests had become violent, Monday’s remained peaceful.

“We felt it was only right to organize something like this,” said Elmont resident Goldie Harrison, 26, noting that in recent years, Valley Stream and Elmont had yet to become involved in the Black Lives Matter movement. “A lot of these people, it’s their first time protesting, and we need to bring awareness to the black lives who have been lost to police violence, but also give people an opportunity to protest and see what that’s like.”

Valley Streamer Christine Rivera, also 26, said she and Harrison had discovered a knack for organizing while the two attended SUNY New Paltz together, and were confident they could draw a crowd.

“We know our reputation in the neighborhood,” she said.

At around 4 p.m., groups of protesters streamed to the corner of Dutch Broadway and Elmont Road and started making signs.

Elmont resident Emily Peralta, 17, and Valley Streamer Ramon Regan, 18, wrote “Hands up don’t shoot” on a small piece of white poster board, and drew a pair of blood-stained hands in marker.

“I think it’s disgusting,” Peralta said of the moment in American history. “I don’t think we should be reliving this, and the fact that nobody’s doing anything about it isn’t making it better, so we’re going to have to take it into our own hands.”

Regan said he was drawn to protest because he believed that even if reforms came out of high-profile police killings such as Floyd, they would not be enough for people of color to escape dehumanizing treatment.

“If the white man doesn’t need laws to be equal in society, then neither does the colored man,” he said. “... We have to make the world a better place by showing that we’re human too.”

As more gathered, many waived signs at the cars that sped by on Elmont Road. Most honked their horns in solidarity, while some slowed, with their occupants thrusting raised fists from lowered windows.

There were a handful of speeches. Harrison and Rivera addressed the crowd. Rivera asked how many attendees had been affected by police violence, and dozens of hands went up. Others read aloud poetry, one played music, and many expressed feelings of outrage, fear and exhaustion.

By around 6 p.m. roughly 200 people, mostly young, had gathered on the corner and marched east on Dutch Broadway with Nassau County police escort and passing the 5th Precinct, where officers formed a perimeter outside. They chanted the names of Taylor and Floyd, among others, along with the slogans “no justice, no peace,” “black lives matter” and “I can’t breathe,” a reference to Garner’s death.

The march ended at Valley Stream State Park with a moment of silence as participants kneeled. There, as the sun set, the speeches continued, but this time messages of anguish — one described living as black as experiencing a form of post-traumatic stress disorder — were mixed with ones of hope.

Business owners and artists encouraged others to start their own businesses and promote their work. Other speakers expressed pride at the day’s show of strength from the Valley Stream and Elmont community. They urged the crowd to stick together, to continue protesting, to continue the conversations about racial inequality and police violence and to push for reforms. Older participants noted the need to vote in both local and national elections, and said younger generations should advocate for long-overdue changes.

“Young folks, I’m proud of you,” Elmont Cardinals President Jon Johnson said. “We’re passing the mantle to you; the baton goes to you. We want you to carry this. We want you to become one, and let me tell you something, you can do this.”

By around 8:30 p.m., the crowd began to disburse, and most walked home with their signs in hand.