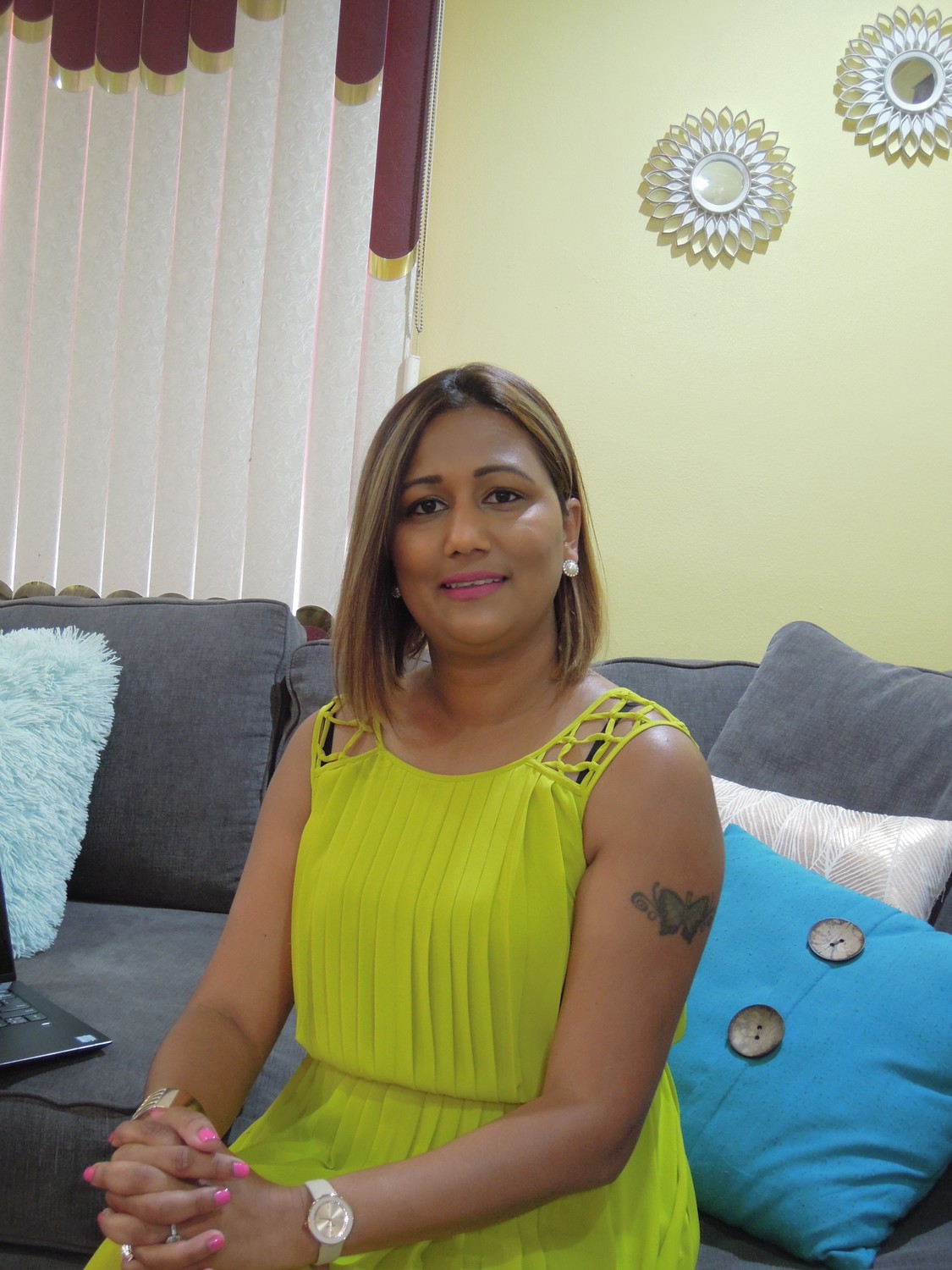 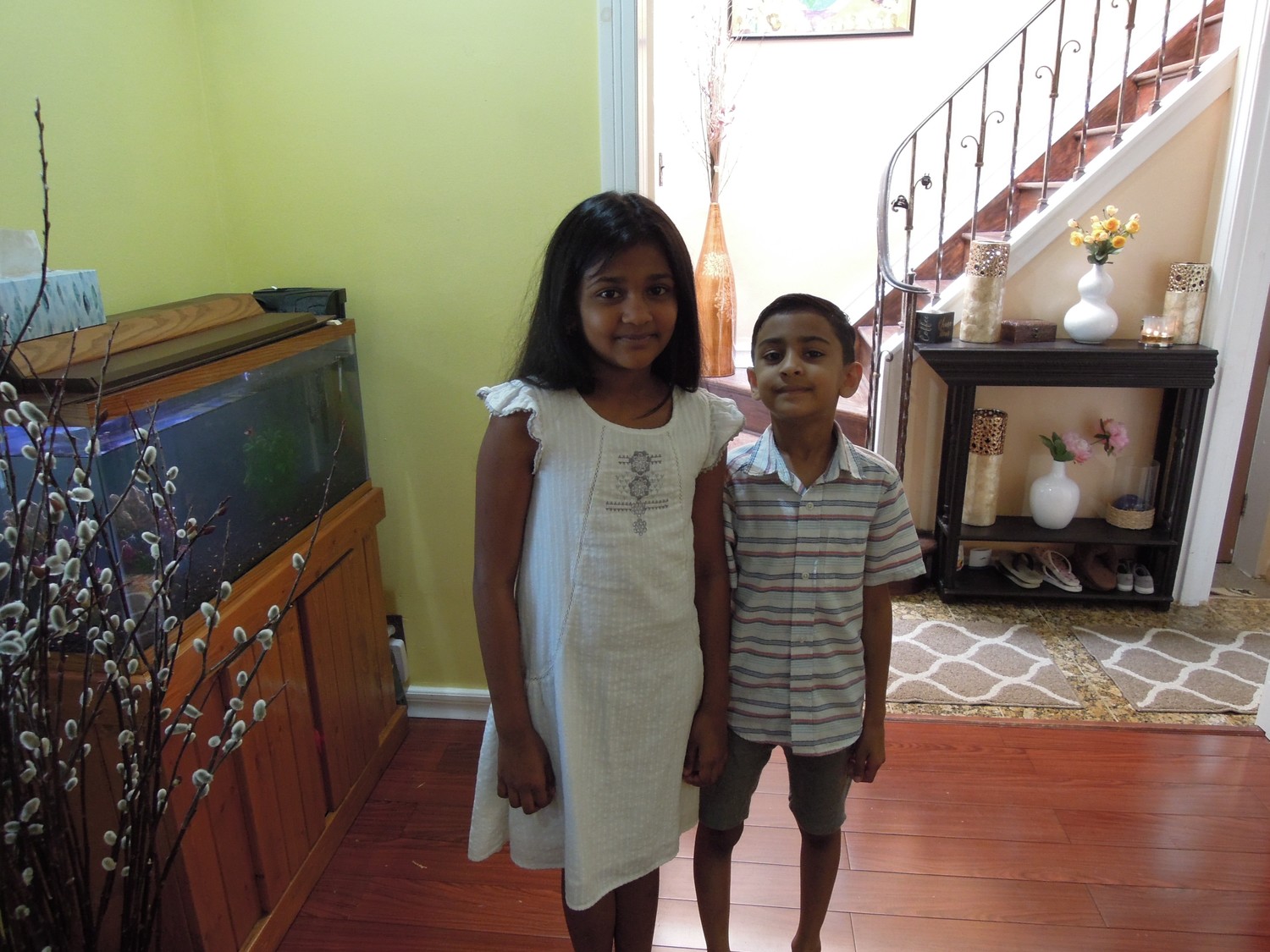 Son K.C., right, provided the impetus for Basdeo's three books when he brought home a science experiment from school.
Timothy Denton/Herald
Previous Next
By Timothy Denton

Valley Streamer Carol Basdeo had a problem. Well, two problems. She wanted to make sure her two young children were getting adequate preparation for their future, with ample training in science, and she wanted to contribute to her family’s income while staying at home.
The solution that Guyana-born science graduate hit on was to become an author. Basdeo launched a trio of short children’s books in April that have science themes.
“I was working in the financial services industry,” Basdeo explained, “and I decided I wasn’t available enough to my children.” She started looking for alternative income sources that would enable her to stay home. “Children need molding,” she said. “I started thinking outside the box, looking for a way to be at home while still contributing financially.”
Basdeo started an event-decorating business, providing the setting for a range of functions and parties. “Besides being a lot of work, the margins weren’t that great,” she said. “The economy is tight, and people often didn’t want to pay.”
Her eureka moment came when her then 5-year-old son came home excited about a school experiment. “The first book was a recreation of something that happened in real life,” she said. “He’d done the apple experiment,” in which he placed an apple in a bowl of water. It floated. Then he explained why.


Basdeo realized that other children might be both entertained and educated by the episode, so she decided to write her first book, “K.C. & Kayla’s Science Corner: The Apple Experiment.” Using fictionalized versions of her own children, Kayla, age 8, and K.C., who turned 6 last week, Basdeo wrote a 22-page book. “It was fun,” she said, “and I thought it could reach other children and inspire them. So I thought, why not write a science series?”
She wrote a second book exploring the nature of matter, followed by a third book on the life cycle of apples. She is at work on a fourth book and expects it to be published at year’s end. She is planning two more after that. All focus on STEM learning — science, technology, engineering and mathematics.
Carl Deris, a young colleague at the bank where she was working, illustrationed the first book. “I saw him doodling one day,” Basdeo said, “and I asked him if he’d ever done any professional work.” Although he had been trained as a graphic artist, he had little professional experience. “When I had the idea for the first book, he was the first person I thought of,” she said. Romualdo Mera Jr. illustrated her second and third stories.
The books are published by MindStir Media and retail for $14.99 each. Each takes about six weeks to write and another 90 days to produce and publish, according to Basdeo. The books have the same three characters: Kayla, K.C. and Mom. The storylines are simple and easy to follow, as are the relationships in the stories. Each book ends with a meal.
“I wanted to promote the cohesiveness of the family,” Basdeo said. “Parents don’t make time anymore to sit with kids, to find out how their day was or to listen to their problems or concerns. We need to take time to interact with our kids, to model the behavior we want them to learn. Somebody needs to be the person who shows what can be done.”
Basdeo’s own journey to authorship — and to Valley Stream — was circuitous. She started out as a science student in Guyana, but when she got to biology,
“I was terrified of blood,” she said, laughing. “Terrified!” When her family moved to the United States, she decided to try
a career in the the financial services industry.
Her family first moved to Queens, then Houston, then back to Queens before making their residence in Elmont. Along the way, Basdeo married husband Neil, a fellow native of Guyana who works for the State Department of Corrections. Together, they moved to Valley Stream, and she began working for one of the country’s largest banks.
“I’ve done everything from teller on up,” she said. After moving to a smaller regional bank, she found herself working long hours, with a hectic commute, and realized that she needed a change.
The family moved to Valley Stream “for the schools,” and life was challenging at first. “I was an outsider,” Basdeo said. “I had to learn a new set of social rules.” She became active in her children’s school and local service organizations, and she was part of the recent effort to re-establish a Kiwanis Club in the village. “In a community like this, it’s so important to be involved,” she said. “Show up and take part.”
She said she would like to establish a Kiwanis Club for children in elementary school. “Kiwanis has a program for older kids at the high school level, but nothing for the youngest children,” she said. “They need to start learning values — leadership and kindness — as early as possible.”
Basdeo said she expects to continue her work as a children’s author, and is planning at least one book for adults as well. She was reticent about the details, but said it would deal with the challenges she faced coming to a new country and community.
Meanwhile, Basdeo’s children love STEM subjects, as well as the ad hoc experiments they do at home as a family. “They’re insatiably curious,” she said. “They’re always asking questions about how things work.” she is happy to oblige with an explanation — “as long as it doesn’t involve blood.”
Report an inappropriate comment