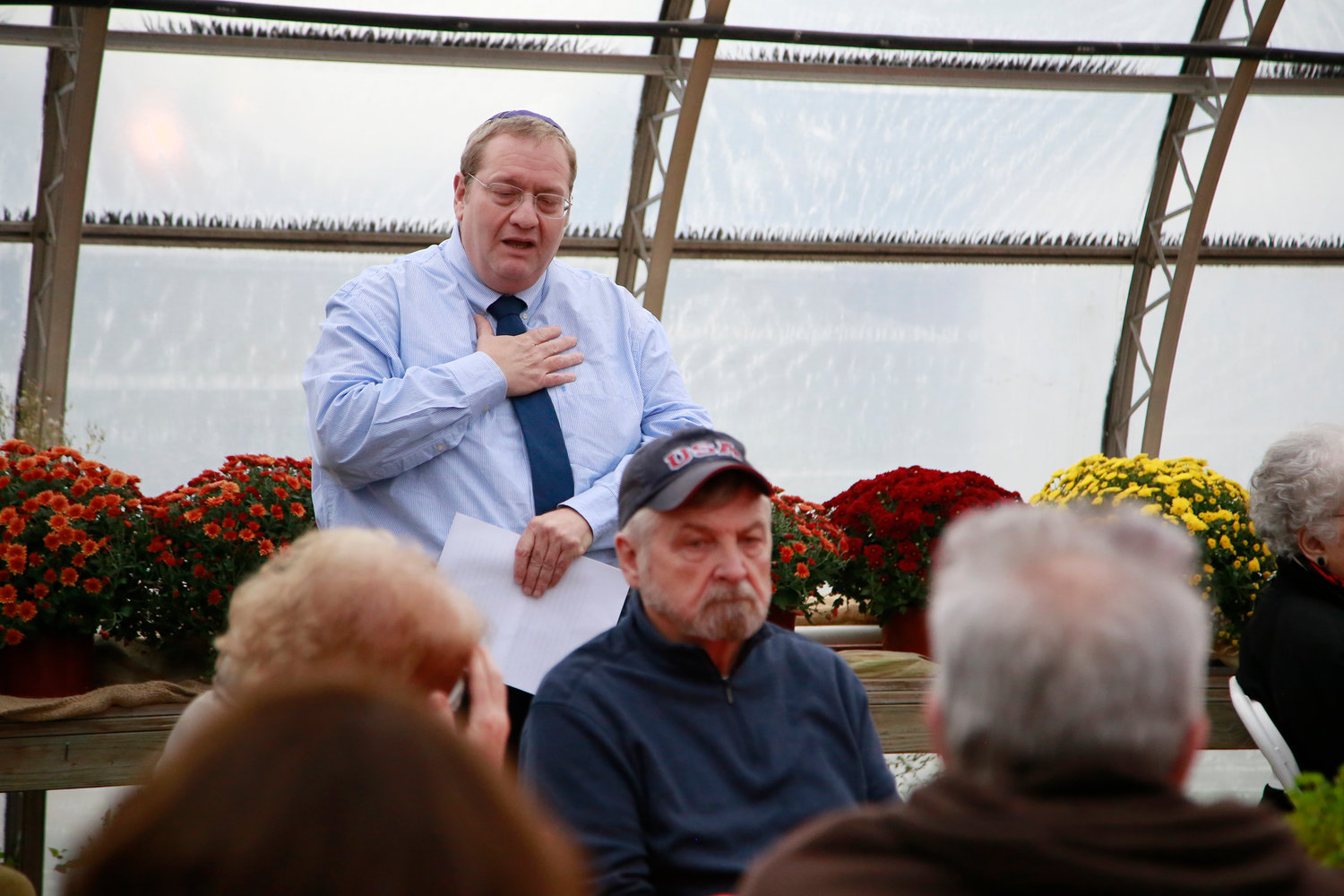 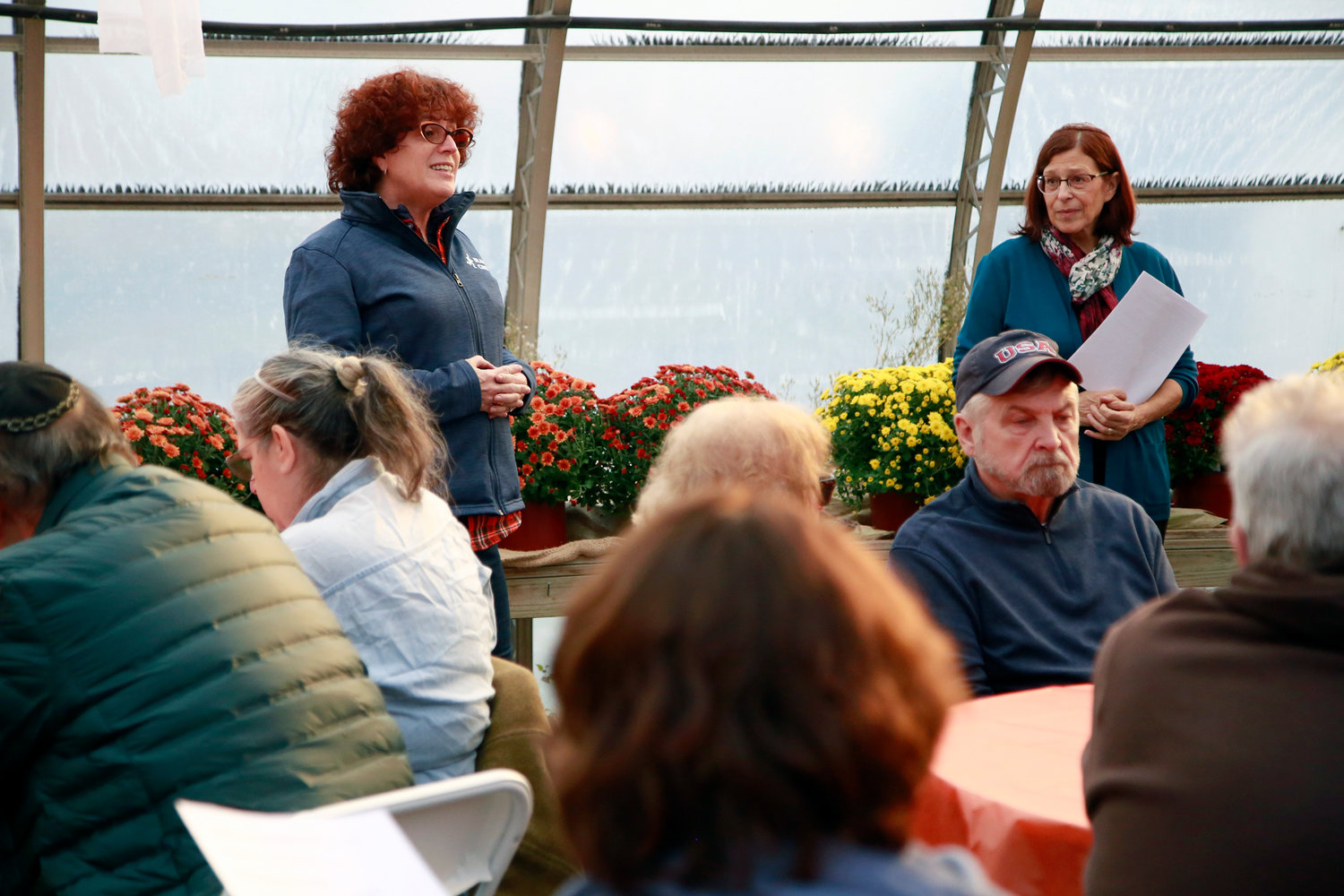 Deborah Gordon, left, a friend of the daughter of Daniel Stein — one of the Tree of Life victims — spoke of his legacy at the service on Sunday.
Sue Grieco/Herald
Previous Next
By Nakeem Grant

Songs of worship were sung, tears were shed and prayers were recited as people gathered for a service titled Stronger Than Hate in the greenhouse at Crossroads Farm at Grossman’s in Malverne on Sunday. The service was held in honor of the 11 people who were killed in the shooting last Saturday at the Tree of Life Synagogue in Pittsburgh.

Rabbi Yechiel Buchband, spiritual leader of the Valley Stream Jewish Center, said that in communities like Valley Stream, where the Jewish population is primarily older, tragedies like the Pittsburgh shooting stir up unpleasant memories from their own experiences of anti-Semitism. He also said that people must raise their voices and call for tolerance, mutual respect and love.

“We must insist that our leaders change the tenor of the national conversation so that we can communicate with one another peacefully and cooperatively,” Buchband said. “We must elevate and celebrate our shared values and let them set the tone of our national conversation.”

Susan Eichenholtz, a congregant of the Valley Stream Jewish Center, said that instead of focusing on hate, people should reflect on moments of love and togetherness. “Seeing the turnout today, it makes you feel hopeful,” Eichenholtz said. “There is comfort in having people come together.”

“It’s always wonderful when people can get together, except in a time like this, where we come together because of a tragedy,” said Rabbi Susan Elkodsi, spiritual leader of the Malverne Jewish Center. “There is so much work to be done.” Elkodsi added that in situations like this, prayer helps people cope with the horror and sorrow.

Through her involvement with marathon runs to support the Crohn’s and Colitis Foundation, Malvernite Deborah Gordon met Leigh Stein, the daughter of Daniel Stein, 71, one of the victims of the shooting, who was a member of the New Light Congregation, a conservative Jewish congregation that was one of three that shared space at the synagogue.

“Not that I knew him well,” Gordon said, “but he was such a generous, kind man who was always smiling. Mr. Stein took so much joy from his children. I will never forget the glow that he always had watching his daughter.”

Malverne Deputy Mayor Keith Corbett said that the political discourse on hate crimes and anti-Semitic incidents does not focus on the issues, but, instead, people are aimlessly blamed. “This isn’t a Democratic or Republican issue,” Corbett said. “This is a human issue. This is an American issue, and we’ve got to get back to a place where we can all speak about issues together. We may disagree, but it doesn’t matter if we’re Christian or Jewish or where we pray. We all have to start to realize that we’re one people.”

“In a situation like we saw yesterday, it is critical that we remind ourselves that every person sitting here tonight is created in the image of God, and has dignity and value,” said the Rev. Dan Quagliata, of The Bridge Church in Malverne. “Every one can do one thing, which is to protect the dignity of every single human being.”

Malverne Chamber of Commerce President Kathi Monroe, who attended the service, said that while it was a sad moment for the United States, it was uplifting to see good-hearted people sharing thoughts of peace and kindness.

“Malverne is a perfect example of that,” Monroe said, “but there’s nothing magical about Malverne. If it can be done here, it can be done everywhere and hopefully, it can take over the world.”

“Thoughts and prayers can lead to positive action,” Elkodsi said, “and it can motivate us to work towards changes in society, whether it’s intelligent and appropriate firearms legislation, or greater access to mental health services.”

A prayer vigil was scheduled for Wednesday at Temple Hillel in Valley Stream, after the Herald went to press.