Anniversary celebration set for May 12 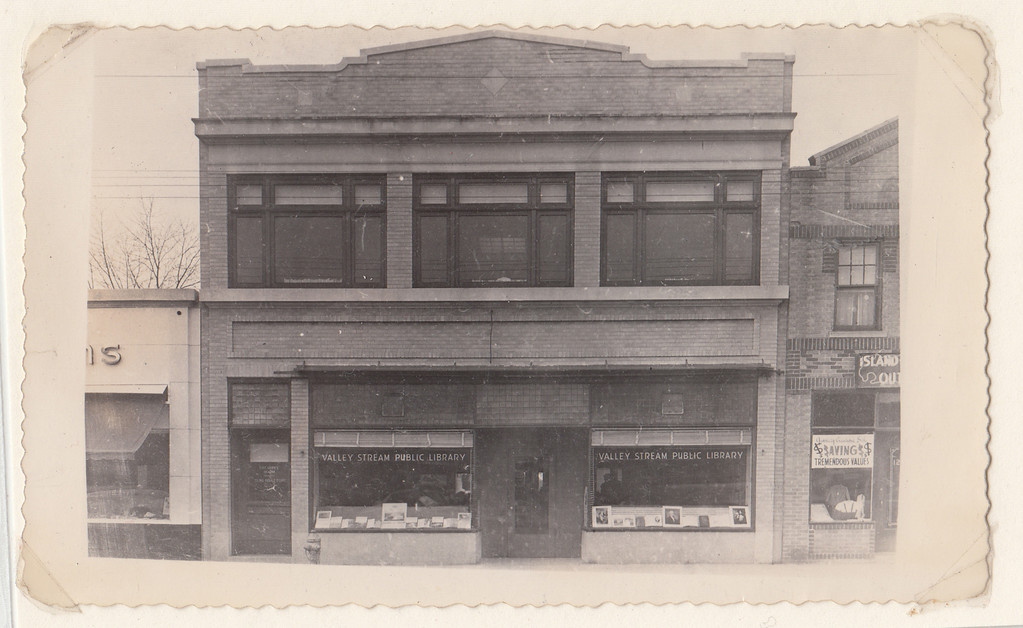 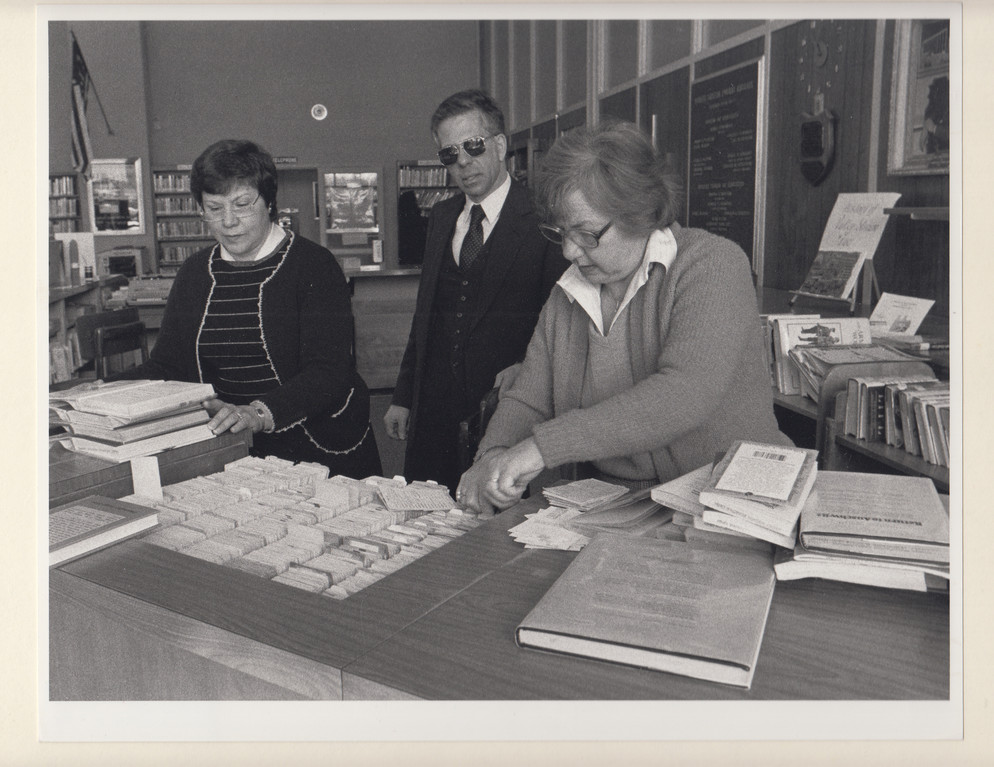 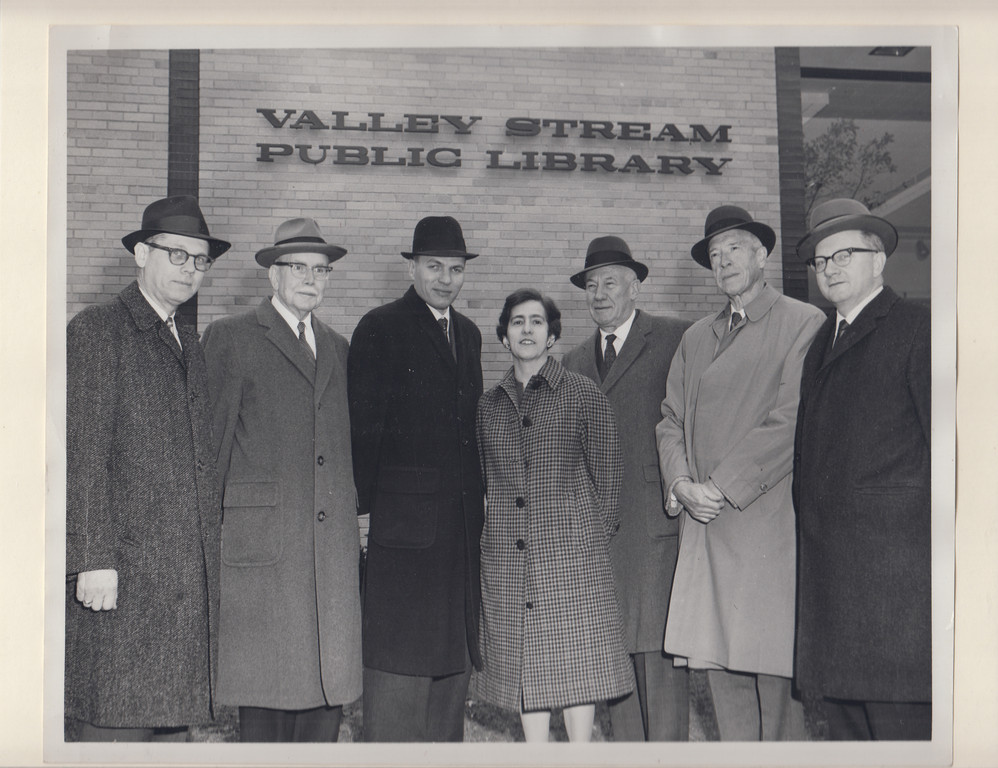 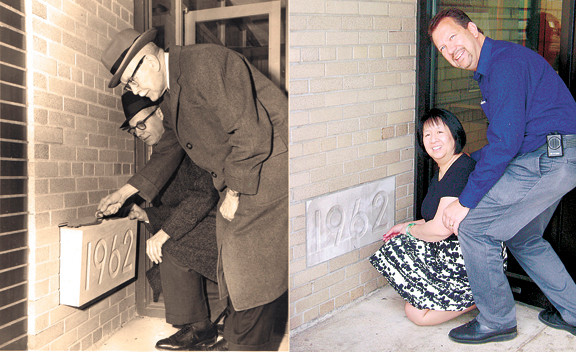 Library Board President George Wandell, left, and Mayor Henry Waldinger laid the cornerstone of the new building in 1962. Fifty years later, Library Director Mamie Eng and Mayor Ed Fare at the same spot, by the entrance to the children’s room.
Courtesy Henry Waldinger Library
Previous Next
By Andrew Hackmack

Fifty years ago, the Valley Stream Public Library was in a small two-story building on Rockaway Avenue, its days numbered in the village’s downtown. A few blocks away, a brand new library was to be constructed behind Village Hall.

In 1962, the new building, today known as the Henry Waldinger Memorial Library, made its debut. Next week, an anniversary celebration will mark its opening a half century ago. “It seemed so spacious,” Library Director Mamie Eng recalled.

Eng grew up on Mineola Avenue in Valley Stream, just a few blocks from the old library, and she remembers walking there with her sisters. The new building opened when she was in grade school, at the now-defunct Franklin Avenue School. She said she has a vague recollection of students from that school, located between the old and new libraries, helping to move the books over.

Caroline Fitz was the library director in 1962. Now 93 and living in Hanover, Pa., she remembers the dedication ceremony for the new building on the Village Green. Fitz spoke at the event, which was attended by then-Mayor Waldinger (the library was renamed in his honor in 1968), representatives from libraries throughout Nassau County, numerous community organizations and members of the public. Fitz said she got a lot of positive feedback from the community about the new building.

“It was more modern than the other one had been,” she said, adding that she had some input when it came to the design of the building. She started as director in 1951 and stayed until 1967, when she moved to Amityville, which also opened a new library on her watch.

The current building has had five permanent directors and two acting directors in five decades. By far the longest tenure was that of Marshall Botwinick, who led the library for 31 years until his retirement in 2007. Botwinick oversaw the facility’s only major renovation project, in 2005, when the interior was refurnished with new carpeting, desks and furniture.

That same year, Botwinick led the library through a major change in technology, as the old card catalog was replaced with an automated system. It was one of the last libraries in the county to become computerized.

Upgrading technology was a challenge, Botwinick said, because the building was constructed on a giant concrete slab, which made it difficult to run wires through the floor. Instead, they had to be routed through the ceiling and drop down — which presented a different set of problems. With railroad tracks nearby, Botwinick explained, passing trains made the building vibrate. Some of the old ceiling tiles would shift and occasionally crash to the floor. But no one ever got hurt, he said.

Despite those quirks, Botwinick said, the building makes for a good library. “It’s very easy to use,” he said. “It’s a very simple building. It’s just a big box, like a big cereal box laying flat.” The facility has just one floor except on its west end, where there are two levels of book stacks.

Botwinick noted how bright and open the library is. Eng, who has worked there full-time since 1979 and was Botwinick’s assistant director for six years, agreed, recalling how dark and dingy the old building was. “The general feeling is it’s a very warm place,” she said of the current digs.

Agnes Libath was a librarian for 29 years, a tenure that spanned four library directors, before she retired in 1993. She still lives in Valley Stream, though she was born and raised in Virginia.

Libath began working at the library when the building was just 2 years old, and was mostly stationed behind the circulation desk. One of her responsibilities was collecting the fines for overdue books. “All those years I loved it,” she said. “I enjoyed it so much. All the people were very nice.”

She has two distinct recollections of the library. It was well-organized, and it was always decorated beautifully for Christmas, Libath said.

Remembering the old and new

Joanne Creegan, who lives in Scranton, Pa., said she grew up on Mineola Avenue, right off of Rockaway Avenue, and would go to the old library often and take out the maximum number of books she was allowed — five. She’d take them home, read them and go back the next day for five more, she said.

Though she was initially not happy when the library moved to its present location, she eventually grew fond of the new space. “I was too young to walk to the new one for quite some time,” she said. “But I did love the new one once I was able to get there. I would spend hours there.”

Kathleen Keller, who now lives in Miami, got her first library card at the old library. “It always was so dark to me,” she said. “When the new library opened, it seemed huge, and there was so much light. Climbing up those stairs to the mezzanine was like a passport to another country. It was magical.”

Valerie Esposito, a lifelong Valley Stream resident, remembers that the children’s room was upstairs in the old library, and the adult section was downstairs. In fact, children had to be a certain age before they were allowed to sit and read on the lower level. While she remembers that building well, Esposito said that the new library was a vast improvement. “It was beautiful and large,” she said.

Dorothy King was the children’s librarian from 1963 to 1970, and briefly served as acting director. Now living in the Hamptons, she recalls hosting numerous story hours each week. Additionally, she remembers the children’s room being very spacious, with a good book collection.

King came to the library shortly after it opened. She said she can still remember how new it was, and enjoyed her time working there. “It was a very nice place,” she said, “and very nice people to work with. There were a lot of nice kids that came there.”

King recalls the small staff of high school students who worked as pages, and whose job it was to put the books back on the shelves.

These days the library has activities for adults as well. There is a monthly book club, and there are computer software classes. Botwinick said that for several years, the library offered dancing classes after hours. In the past there were also bus trips, cooking classes and lectures, but he said that space limits what the library can do for adults. Teen programs, however, were expanded during his tenure.

The range of programs often depended on who was mayor, Botwinick said, because the library is funded primarily by the village. Some administrations were more supportive than others, he said, though the last few mayors of his tenure were among the most generous. The current library budget is $1.4 million.

Former Village Trustee Joanne Antun served as the liaison to the library board under three mayors — George Donley, James Darcy and Edward Cahill — a responsibility she had for about 15 years. Her primary role was as a communicator, serving as the voice of both the library and the village board in their exchanges.

“The collaboration was fruitful, and in spite of modest funding, great work was accomplished — everything from automation of the card catalogue to the large-scale interior redesign,” Antun said. “It is a testimony to both the dedication of our library board members and the executive leadership of our library director. As we celebrate the library’s 50th anniversary, I extend my personal thanks to each for their commitment to excellence.”

Every library has its limits

While the openness of the library is one of its perks, the lack of meeting space is one of its weaknesses. There are no meeting rooms for community groups. Eng said that the building lacks sufficient space for adult programs.

The fact that the library is generally one big room, with the exception of the children’s room and offices in the back, also presents challenges. Eng said that because of the high ceilings, it is virtually impossible to divide the library into smaller spaces for quiet study or meeting space. There is also no elevator to the second level of the book stacks.

In addition, there is a limit to the number of books the library can have on hand. Eng said that the staff must evaluate the collection on a regular basis. The priority is to keep books that are relevant and new. Shelf space has decreased over the years to make room for technology and programs. The library has used-book sales twice a year.

Despite its limitations, Eng said, she would put Valley Stream up against any other library in the county. “With the resources we have,” she said, “we’re doing a good job to keep us on par with the other libraries.”
Report an inappropriate comment