Vaping goes up in smoke

Village proposes to ban sale, use of e-cigarettes 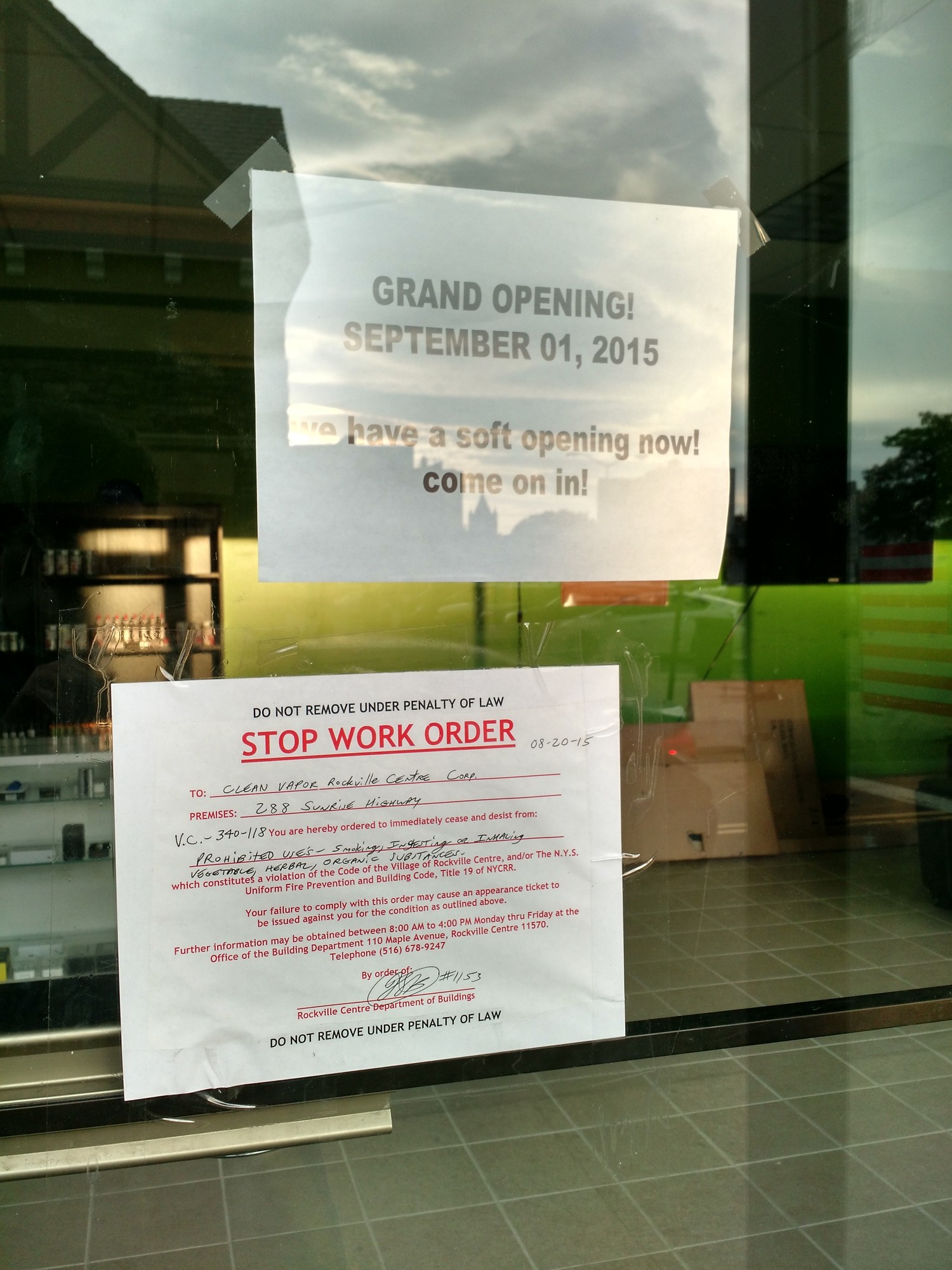 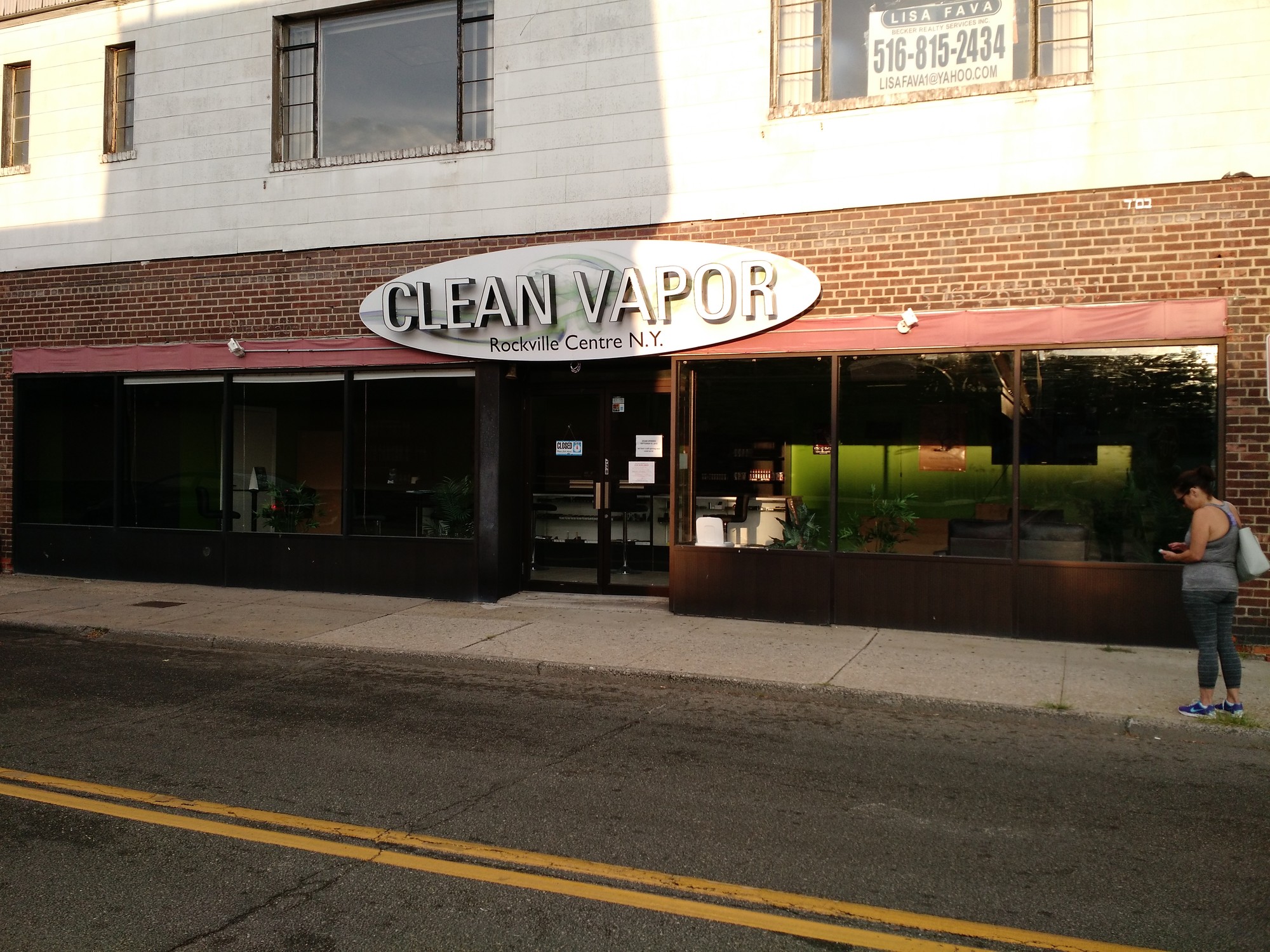 Clean Vapor Rockville Centre was shut down by the village under its law banning hookah bars. The owners are currently fighting the stop work order they received.
Alex Costello/Herald
Previous Next
By Rebecca Melnitsky

Electronic cigarette stores could soon be banned from Rockville Centre.

A new bill being considered by the village would end the sale, testing or use of e-cigarettes in any non-residential building. E-cigarettes are battery-powered devices that convert liquid into a vapor that the user inhales — an activity often called “vaping.” There are a wide variety of e-cigarette liquid flavors, and some are nicotine-free.

“We recently banned hookah bars,” Village Trustee Ed Oppenheimer said. “And this is something that we discovered is a little lax. So it’s a little refinement of the law.”

There is one e-cigarette store in the village — or at least there was for a few days last month. Clean Vapor Rockville Centre had its “soft” opening in late August. According to owner John Lappas, it was open and operating even though some furniture and equipment still needed to be moved in.

“People were coming in and purchasing items,” Lappas said. “It was actually pretty busy, too.” He said that customers said they were tired of going to other towns to purchase e-cigarettes.

After a few days of operation, however, Lappas said, the business was served with a stop-work order by the village on Aug. 20. But the order cited the law banning hookah bars, specifically the section that forbids hookah smoking. Both Lappas and his partner, Boris Kowatschitsch — who own three other e-cigarette stores on Long Island — said they told village government that they would not allow people to smoke in their store.

“I’m going to fight that,” Kowatschitsch said when he was told about the e-cigarette bill. “Now I’m going to have even more fun fighting the village.” He said that e-cigarettes help people quit smoking.

Village officials did not respond to repeated attempts to clarify the law under consideration and what it would mean for the future of Clean Vapor Rockville Centre. The village will hold a public hearing on the proposed law on Oct. 6.

Oppenheimer said that the village wants to ban e-cigarettes because their candy-like flavors often attract children and teenage users. The minimum age for buying e-cigarettes and regular cigarettes is 19.

The Village of Lynbrook banned the use of e-cigarettes in public areas — including bars, restaurants and offices with more than three people — in May 2014. New York City and Suffolk County have banned their sale to anyone under age 21, and prohibited their use anywhere cigarettes are banned. New York City does allow vaping in e-cigarette shops.

How do you feel about the village’s proposal to ban e-cigarette sale? Send Letters to the Editor to rvceditor@liherald.com.