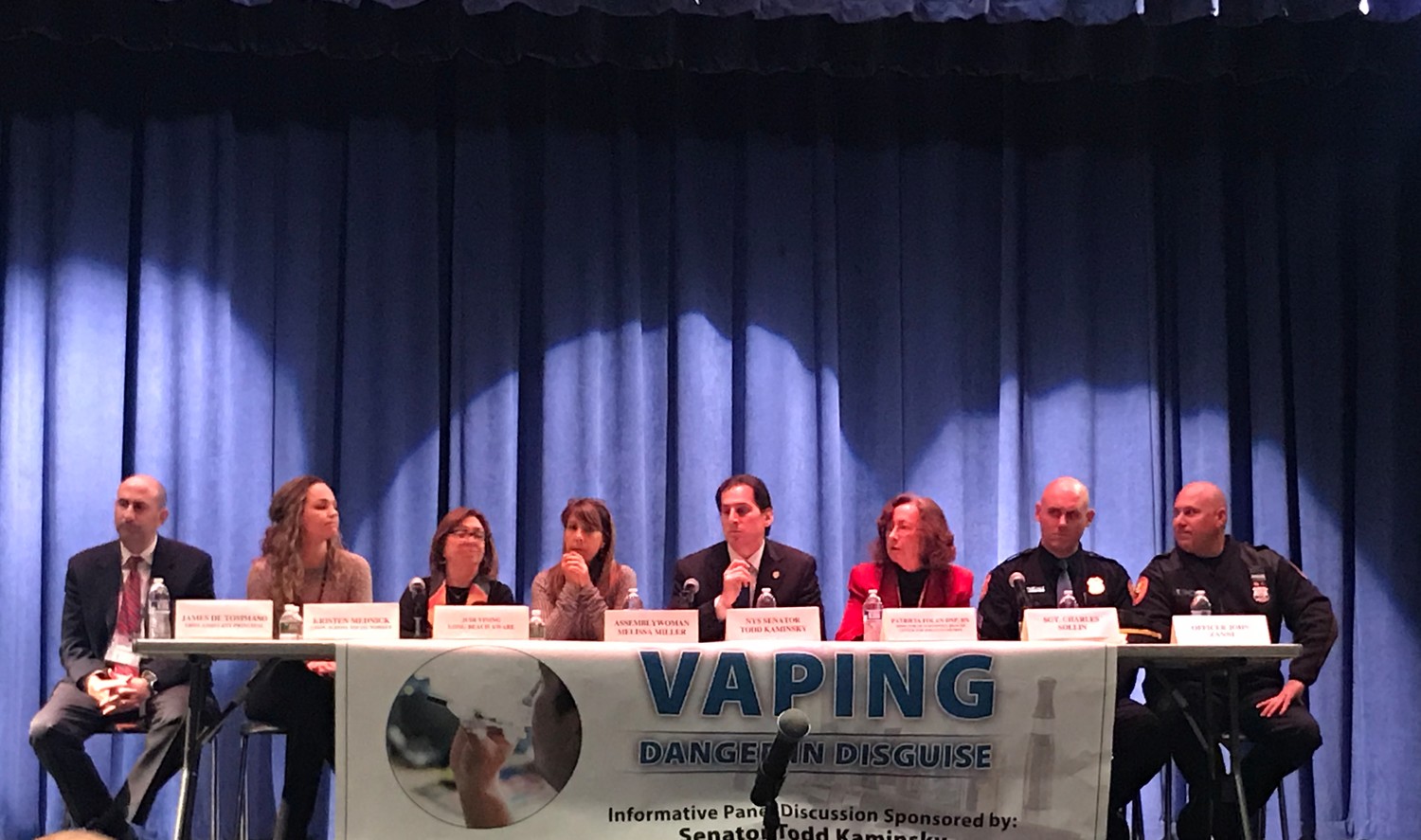 “Vaping” is much like smoking, only it’s done with an “electronic cigarette.” It produces no smoke, only water vapor, and is odorless, making it hard for school officials to detect when students are puffing away on their e-cigarettes.
That, in part, explains why it has grown in popularity among teens in recent years, with 21 percent of New York high schoolers vaping, compared with 4.3 percent who smoke, according to Patricia Folan, director of the Northwell Health Center for Tobacco Control.
“It really is an epidemic here in New York state,” Folan said. She was speaking at a Dec. 4 forum at East Rockaway Junior-Senior High School, attended by about 500 people. The panel discussion featured health experts and elected leaders from across Nassau County, including Lisa Ruiz, the East Rockaway School District superintendent. “Vaping has become a significant concern for us in our school district,” Ruiz said. “Speaking with all of my colleagues in neighboring districts, this has become a challenge for all of us across Nassau County.”
State Sen. Todd Kaminsky, Assemblywoman Melissa Miller and the East Rockaway Prevention Task Force sponsored the forum, titled “Vaping: Danger in Disguise.” Too many teens, officials said, believe vaping is safer than smoking, when it’s not.
To encourage students to come, Ruiz said, they were offered extra credit for attending.


Also in attendance were members of the East Rockaway and Lynbrook boards of education, Lynbrook Superintendent Dr. Melissa Burak, Lynbrook Mayor Alan Beach and East Rockaway Mayor Bruno Romano.
The U.S. Surgeon General’s website notes that vaping affects brain development in young people, which begins at birth and continues through age 25.
Many of the additives in e-cigarettes are considered harmful to health, including diacetyl, which is linked to lung disease.

The dangers of vaping
Judi Vining, executive director of Long Beach Aware, a group that aims to end substance abuse in local communities, said that 58 percent of people who vape also use other more traditional tobacco products. She cautioned that vaping could lead to other drug use, including opiates and heroin.
“Nicotine is one of the most addictive drugs you will have,” she said, addressing the students. “And your brains are growing. You don’t want to put anything in there that’s going to impair your thinking.”
Miller said that the liquid used to flavor the vape leaves deposits on users’ lungs, which permanently scars them. She noted that the technical name for the condition is bronchiolitis obliterans, “because it obliterates your lung tissue.” She said vaping could also lead to a condition called “popcorn lung,” which is severe damage to the lungs.
Kaminsky noted that much as people did not realize the dangers of smoking until studies were done years later, they may not now understand that vaping can cause equal levels of damage to people’s health.
“Where are we going to be 20 years from now with the vaping industry? “ he said. “We don’t have to wait and we don’t have to worry. We can take action right now.”

Cracking down on vaping
Sgt. Charles Sollan, of the NCPD’s 4th Precinct, said that while it is not illegal to possess vaping products, it is illegal to sell them to people under 19. He urged residents to contact the police if they know of anyone selling the products to minors.
“If they get a certain amount of fines in a finite period, they’ll lose their license,” Sollan said. “… If we get enough arrests on them, they can’t sell tobacco products whatsoever.”
He added that there are undercover operations in which officers send minors into different stores that offer tobacco products to see whether they will sell to them. According to Sollan, there has also been an increase in the number of arrests for liquid cannabis, which is marijuana that can be smoked via the e-cigarettes.
To curtail the growing trend of teenagers using vaping products, the Long Beach City Council voted unanimously on Dec. 5 to prohibit the sale of tobacco to those under 21, including electronic cigarettes and other devices. The measure aligned with a law passed by the Town of Hempstead earlier this year that raised the age to buy tobacco products from 18 to 21.
Peter Ledwith, the Village of Lynbrook attorney, said the board had already added a law to its code that prohibited vaping inside any public place. “The effect of it is, even stores that want to sell the vaping products may not have anybody try the new products in their store,” he said. Romano said East Rockaway also changed its law to 21.
School officials are also doing their part to crack down on vaping. Ruiz said the district has provided lessons and informational presentations for students and parents about vaping and the dangers of substance abuse. She added that students who have been caught with the devices have been suspended from school and then counseled upon their return. She noted that the Plainedge School District recently added detectors in its bathrooms that are better equipped to sense smoke from vaping products, and the district is looking into possibly acquiring them.
James DeTommaso, the assistant principal for the high school and co-chair of the East Rockaway Prevention Task Force, and Kristen Mednick, a social worker at the school and co-chair of the task force, have spearheaded education efforts.
Burak said that the Lynbrook Board of Education was slated to revise its policies at its Dec. 13 meeting to include stronger language about the use of vaping devices and is gathering information about the detectors. “The health and well-being of our students is our top priority,” she said. “As educators, we are concerned that students are vaping without knowing the full destructive consequences to their decisions.”

To learn more about the dangers of e-cigarettes or to get help quitting, visit e-cigarettes.surgeongeneral.gov, smokefree.gov or call (800) QUIT-NOW.
Report an inappropriate comment