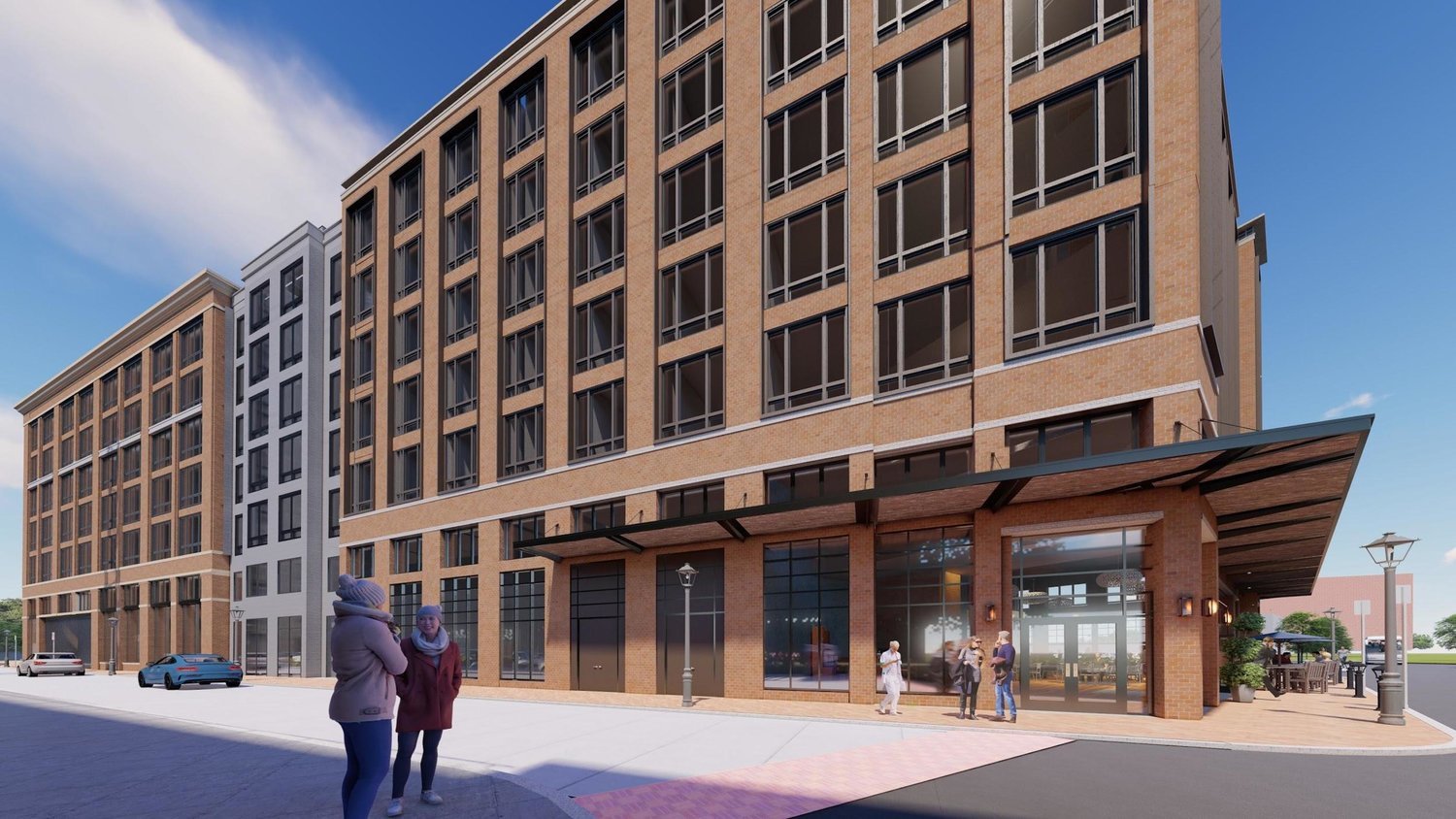 The Lynbrook village board unanimously approved a 201-unit apartment complex for the site of the vacant Mangrove Feather factory at its meeting Monday night.
Courtesy Breslin Realty 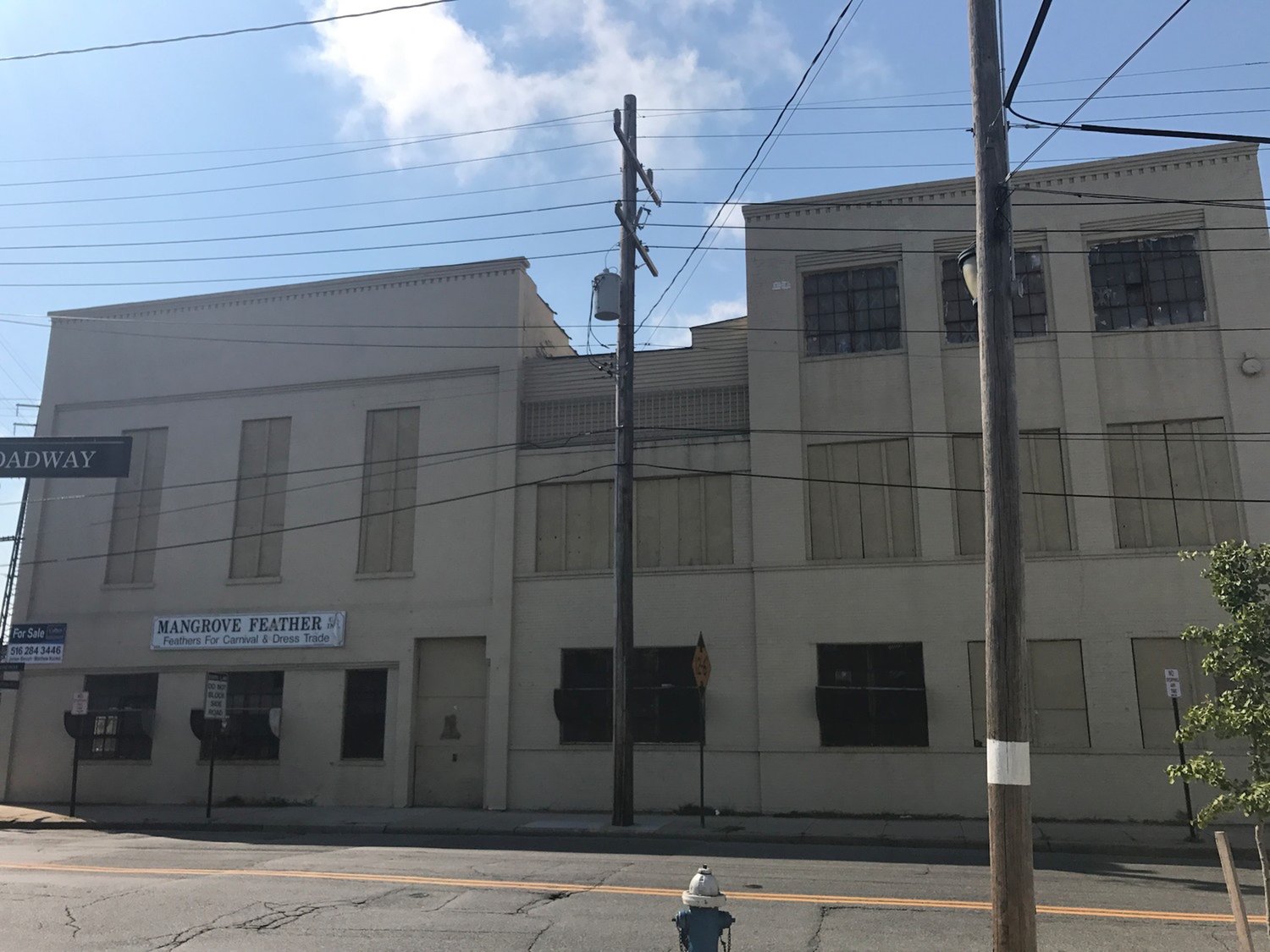 The building has been vacant since 2008.
Mike Smollins/Herald
Previous Next
Feather factory through the years

The building at 4347 Broadway has been a fixture in Lynbrook since the early 1900s. Village historian Art Mattson noted in his book, “The History of Lynbrook,” that it was originally known as the Bates Opera House, and owned by Ed Bates.

According to Mattson, the opera house was sold to Max Strassner and Jesse Bettmann in 1916, and they converted the building into a knitting factory. By 1917, the Atlantic Knitting Mills became Lynbrook’s largest employer, hiring 60 men and 60 women.

The property remained a source for development for many years, and eventually the Mangrove Feather Company moved into the ground floor. It produced feathers for the carnival and apparel industries.

In 1982, Reuben Marin purchased the 35,000-square-foot, three-story building and manufactured men’s sportswear for his company, English Sportswear. He distributed his products to well-known outlets such as Brooks Brothers, Saks Fifth Avenue and others.

In 2005, Marin was looking to close his business when he received what he described to a Herald reporter in a 2018 story as “a very compelling offer” from Barry Singer, and sold him the property.

Singer purchased the property to develop it, but clashed with village officials when they did not approve his plans to redevelop the building. There was once a proposal to build a Holiday Inn Express at the site, but nothing came of it. In 2011, hotel developer Lee Browning eyed the property as a potential place to build a Courtyard by Marriott, but that project did not come to fruition, either.

After failed negotiations, the relationship between Singer and members of the village board soured. The building was vacated in 2008, and shortly after, issues of graffiti, squatting, skateboarding and trespassing were frequently reported there.

In 2017, David Orwasher, the chief development officer for Breslin Realty, began negotiating with Singer, and they reached an agreement in March to build a 210-unit apartment complex there.

After two meet-and-greets between Orwasher and residents and a public hearing in May, the board unanimously voted to approve the project at Monday’s meeting.

The Lynbrook village board on Monday unanimously voted to approve a developer’s plans to build a 201-unit apartment complex at the site of the vacant former Mangrove Feather factory.

The building has been dormant since 2008, and the Garden City-based Breslin Realty started negotiating with building owner Barry Singer to purchase the property in November 2017, finally closing a deal in March, pending board approval. The project is expected to cost $90 million to $100 million, and David Orwasher, the chief development officer for Breslin, said he would likely seek a payment in lieu of taxes, or PILOT, agreement with the town or county Industrial Development Agency to complete it.

Monday’s decision came after Orwasher hosted two separate community meet-and-greets in April, at which he listened to feedback from residents and shared his vision for the site, and a public hearing last month where the project was mostly met with favorable reviews.

The complex will be a five-story building, with 55 studio apartments, 111 one-bedroom units and 35 two-bedrooms. Additionally, 10 percent of the units are to be designated as affordable workforce housing, for individuals or families at or below 130 percent of the area’s median income. Workforce housing generally includes those who are not typically eligible for affordable housing programs.

Before the vote, all board members spoke favorably about the project and explained why they thought it was a solid fit for the village. Deputy Mayor Michael Hawxhurst said he has seen many proposals for the site over the years, but thought this plan was best. He also said it would have been too costly for the village to purchase and develop the building, and lauded Orwasher for meeting with residents and addressing their concerns about potential traffic, design, parking and other issues, including the potential impact on the school district.

Trustee Ann Marie Reardon said she was also pleased with how the developer handled community outreach for the project, adding she believed it was a perfect fit for the village because it can attract millenials and retirees.

“There’s a great opportunity for people to come to Lynbrook,” she said, “and I think this development is a good start to bring them here.”

Trustee Robert Boccio called it a “tremendous opportunity and a massive investment,” which he said he hoped would help local businesses that have struggled after the coronavirus pandemic, while Trustee Laura Ryder said it’s rare that a company would invest $100 million in the village.

“I believe this proposal brings a lot of opportunities to Lynbrook,” she said, “to get rid of that terrible eyesore, which has been a blight on our downtown, and to be able to replace it with a state-of-the-art, upscale, tax-generating building.”

The building’s first two floors will house a parking garage, with 205 parking spaces for residents. Amenities will include a retail café, clubroom, concierge, rooftop terrace with grill, lounge, party room and dog run. Experts have also estimated that owing to the large number of studios and one-bedroom apartments, six to 19 school-age children would likely be added to the district.

The site has been dormant since 2008, and several village administrations have sought to develop it, but it took many years to persuade the owner, Barry Singer, to sell the property. Orwasher said he thought the site was an ideal spot because of its proximity to the Long Island Rail Road station and to downtown shops and restaurants. Breslin negotiated with Colliers International's Jordan Baruch and Matthew Kucker, who brokered the deal.

The plan now needs the OK from the Nassau County Department of Public Works and fire marshal before it can move forward, and will be reviewed by outside engineers, who must approve construction plans before a building permit can be issued. It will take about six to eight months to raze the vacant building and two years to build the new apartment complex.

This project is the latest that the board has approved for the village, in addition to the 80-unit, $24 million Cornerstone at Yorkshire apartment project that is now under construction at the former site of the Capri Lynbrook Motor Inn.

“I believe we’re in the right direction having a quality person come into our village, and I believe that’s what Breslin represents,” Beach said. “Sometimes the stars align and things work out, and I think we’re very fortunate that the Breslin organization came along and is investing all this money in our village. It’s a good thing for us.”

To learn more about the project, visit restore4347broadwaylynbrookstation.com.