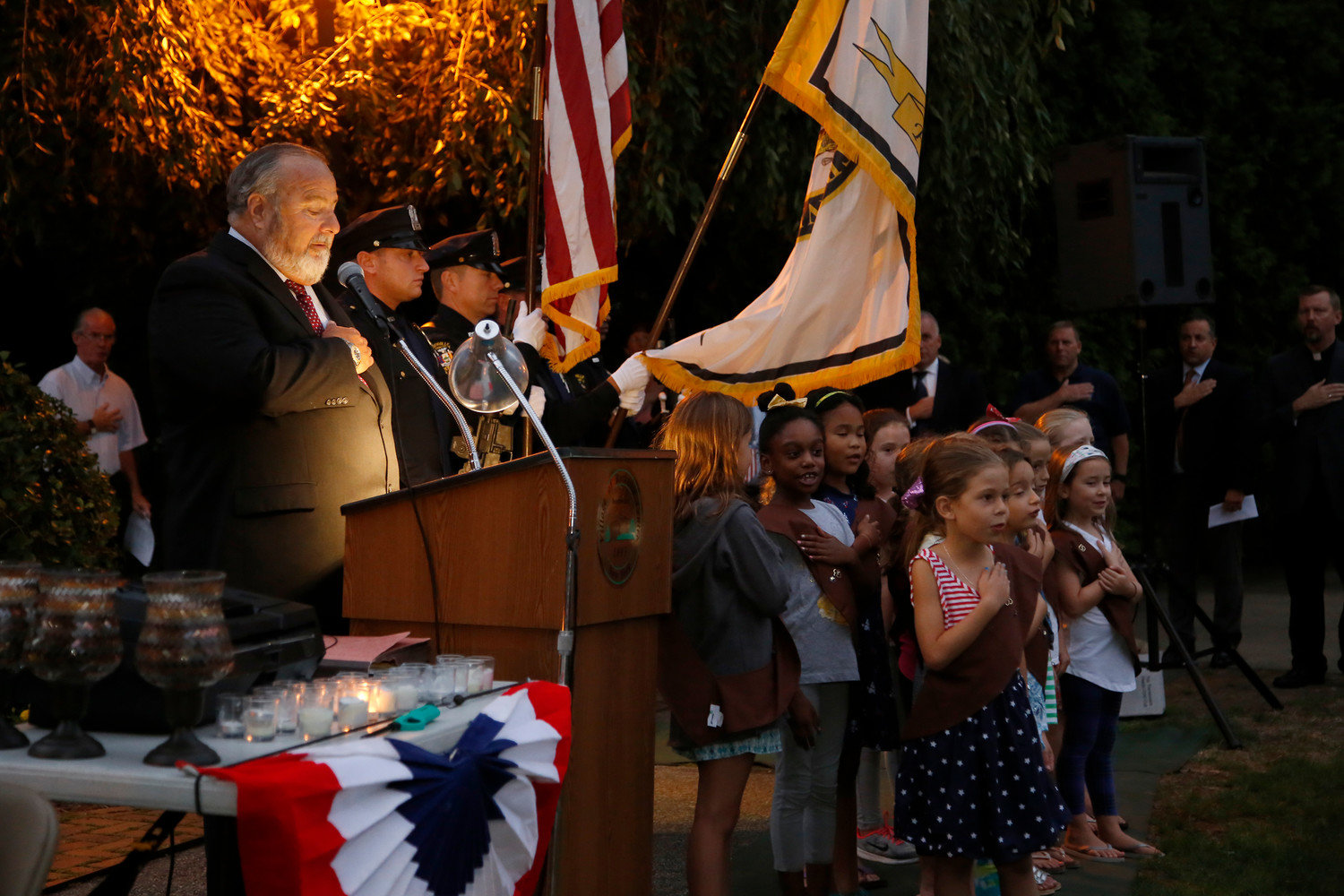 Mayor Francis Murray and local Girl Scouts led the Pledge of Allegiance before the 9/11 ceremony in 2017.
Sue Grieco/Herald
By Daniel Offner

In remembrance of the 21st anniversary of the attacks of Sept. 11, 2001, Rockville Centre officials have announced that they will be adding the names of those who have died of 9/11-related illnesses to the village’s Sept. 11 memorial.

“The events of 9/11 continue to wreak havoc on our first responders and survivors,” Mayor Francis Murray said at the village board meeting on Aug. 18. “We know that a growing number of firefighters, police officers, tradesmen, downtown workers, residents, students and so many others have gotten sick or died from illnesses related to the toxins in the dust from the burning buildings.”

The images of the attacks and their aftermath have been seared into Americans’ hearts and souls — perhaps nowhere more than in Rockville Centre, where 49 residents lost their lives.

After the twin towers of the World Trade Center fell, the local community came together in a display of great generosity. More than 70 village firefighters took part in the rescue and recovery efforts at ground zero. Residents also pitched in to give blood and assemble care packages for rescue units, filling more than 2,000 boxes with work boots, socks, underwear, sweatbands, and other items.

“We banded together to show what it means to be RVC strong,” Murray said.

Within a week after Sept. 11, Murray’s father, the late former Mayor Eugene Murray, Village Judge William Croutier Jr., and the late former recreation Superintendent Anthony Brunetta established the We Care Committee to help the families of local victims of the attacks. The three men led an effort to create a network of volunteer support services and helped provide more than $1 million in financial aid to affected families, and were instrumental in constructing the village’s Sept. 11 memorial in 2012.

Each year since the memorial was completed, community members have gathered on the village green, at the corner of Lee and Maple Avenues, to pay their respects to those who died and honor those who helped their survivors. Last year, for the 20th anniversary observance, the village refurbished the memorial, and a 21-gun salute highlighted the ceremony.

“It’s hard to fathom that we are coming up on the 21st anniversary of the worst attack on American soil,” Murray said. “Sept. 11 was an attack on everything we as Americans hold dear, and it has changed forever the way we go about our daily lives.”

Police Commissioner James Vafeades told the Herald last year that it was vital to remember the lives lost that day. “As many know, the Village of Rockville Centre suffered more than most Long Island communities on 9/11,” Vafeades said. “The remembrance ceremony allows all of us to take the time to support our friends and neighbors who lost loved ones that day. The members of the Rockville Centre Police Department certainly will never forget.”

The names of residents who succumbed to 9/11-related cancers and other illnesses will be inscribed on the memorial alongside the 49 others who lost their lives that day.

Families interested in adding their loved ones to the memorial are asked to fill out an application on the village website, or call Village Hall at (516) 678-9260.

The 21st Year of Remembrance ceremony will take place on Sept. 18 at 6:30 p.m. Before the observance, a special Mass will be held at St. Agnes Roman Catholic Church, on Quealy Place, at 5 p.m.

Murray will offer the opening remarks at the event, followed by an invocation from the Rev. Michael Duffy, of St. Agnes, and Rabbi Michael Cohen, of Central Synagogue-Beth Emeth. Those who lost loved ones on Sept. 11 will also be invited to speak, and the names of those who died in the attacks will be read. That will be followed by the singing of the national anthem and “America the Beautiful,” and the playing of taps.

Local Boy Scout and Girl Scout troops will take part in the ceremony, along with members of the village police and fire departments, and Deputy Mayor Kathleen Baxley will offer closing remarks.