North Shore senior has Heart of a Giant 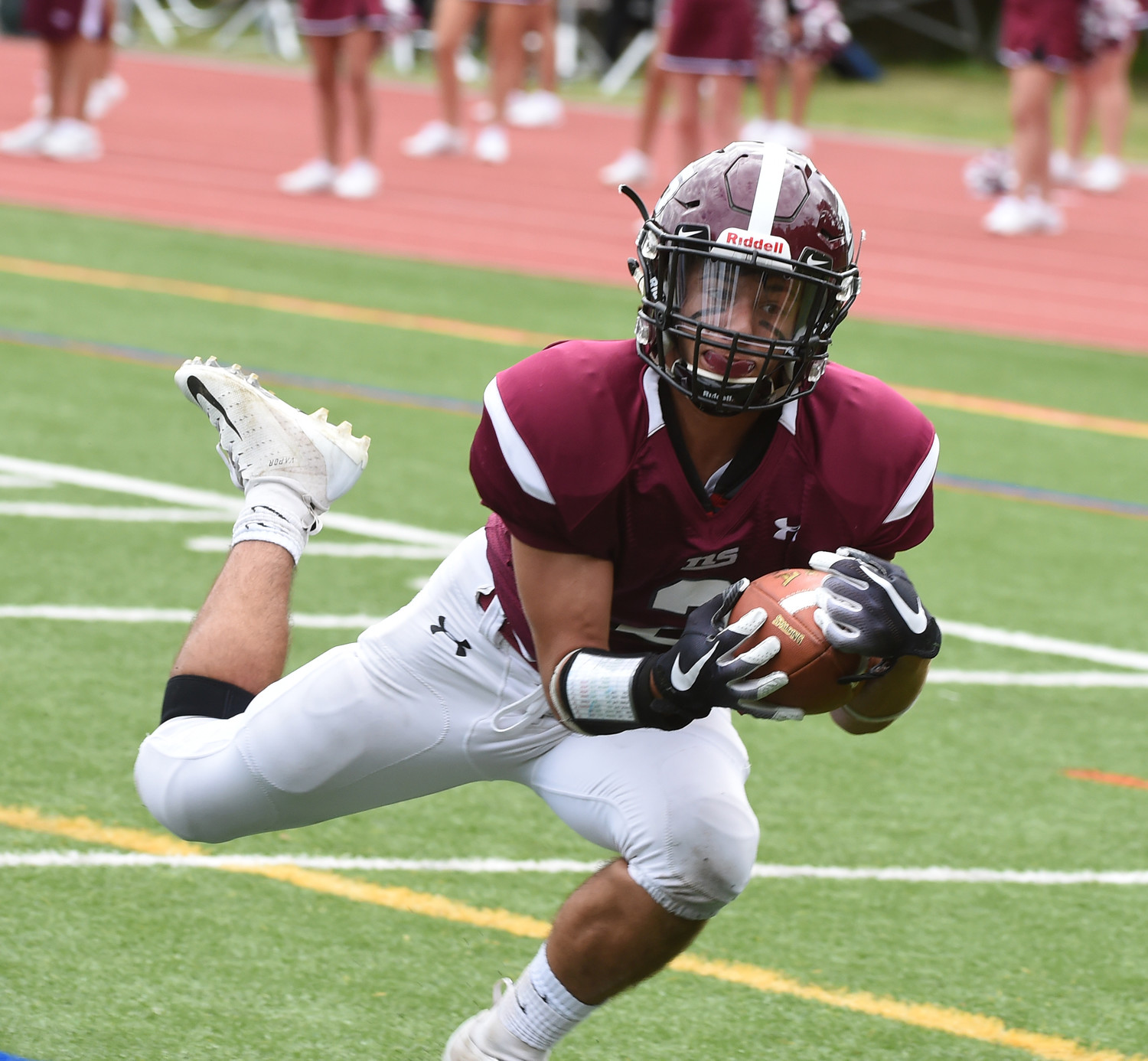 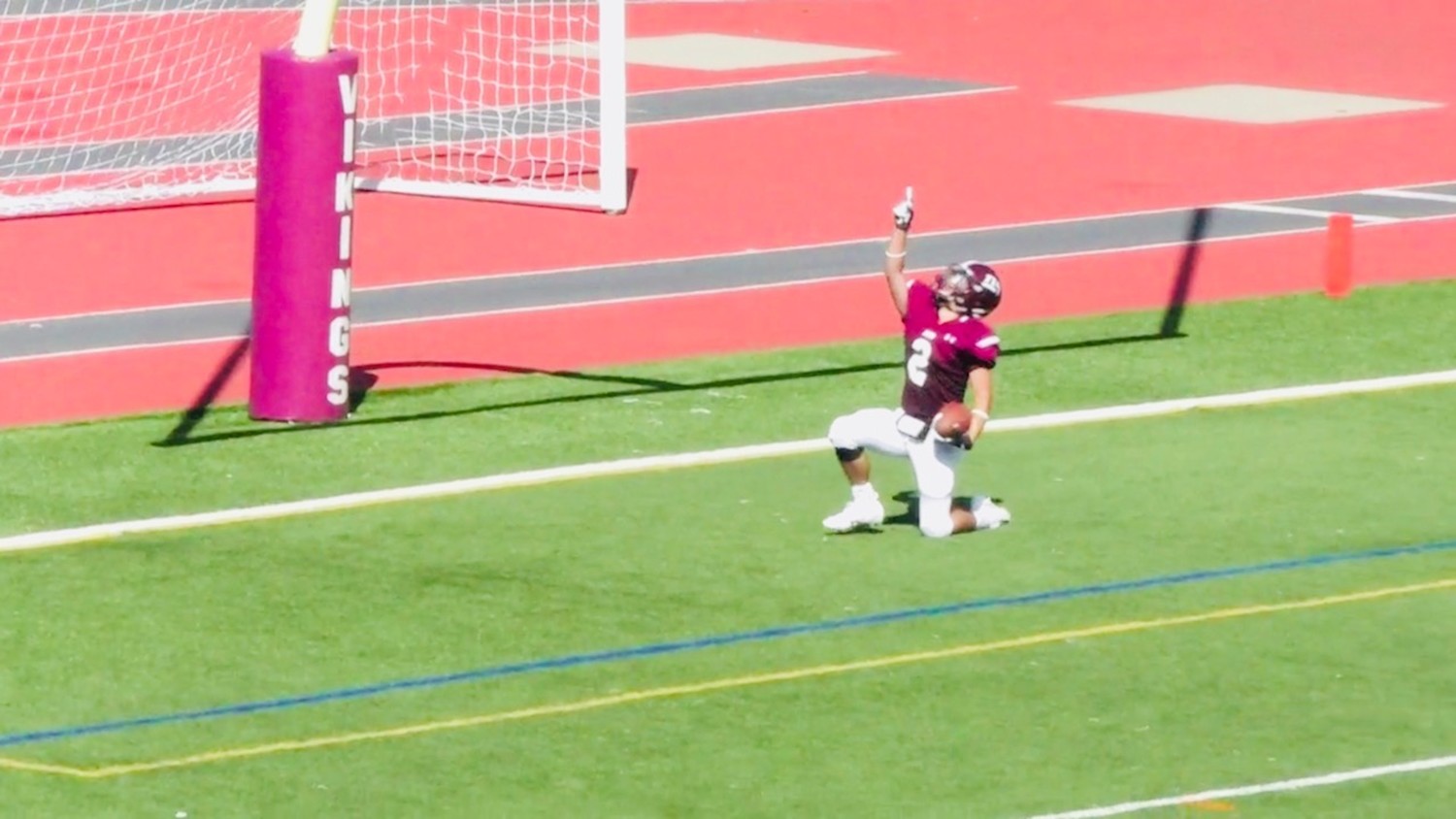 Luca Marra points to the sky after scoring a 57-yard touchdown, his first of the season.
Courtesy Claudia Marra 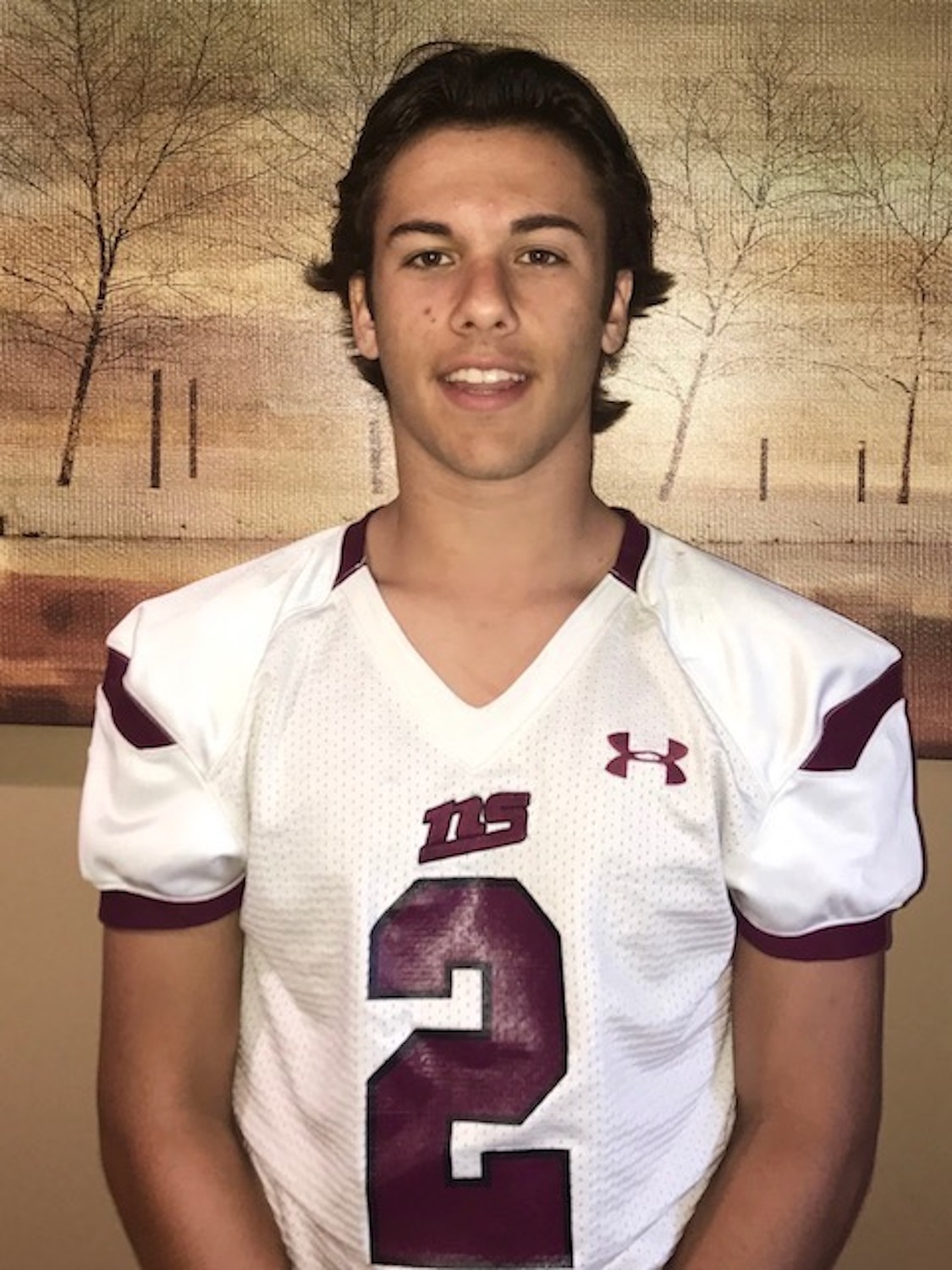 North Shore High School senior Luca Marra, of Glen Cove, has been nominated for the Heart of a Giant award.
Courtesy Claudia Marra
Previous Next
By Joe Pantaleo

Luca Marra coasted across the North Shore Viking goal line for a 57-yard touchdown, his first of the season. Before his teammates greeted him in the end zone, the senior wide-receiver took a moment to take a knee and pointed to the sky.
“We have a lot of angels up there,” said Luca’s mother, Claudia, describing the moment.
Marra, 17, has dedicated his senior football season to his cousin, Nico, who recently died from a rare unnamed illness. “I have his name on the inside of my cleats,” Marra said. “Before every game, I say a quick prayer.”
He also lost his father, Mario, when he was seven. Having introduced his son to the sport, Marra acknowledges that football is one of the lasting bonds he shares with his late father.
It was from Mario that Luca learned about the importance of hard work and dedication. When he was four, Mario would have Luca catch bricks to improve his catching abilities, a technique he learned from professional football player Jerry Rice’s father. Although it wasn’t the most enjoyable introduction to the sport, Luca said the foundation his father gave him was instrumental for his current success.


Earlier this month Marra was nominated for USA Football’s Heart of a Giant Award, which is given to a high school football player in the tri-state area who demonstrates an unparalleled work ethic and a passion for the game.
“Luca without a doubt fits that criteria,” said Dan Agovino, the coach of North Shore High School’s football team. “He’s had some tragedy in his life, and for him to overcome that and have a positive attitude while giving back to the community obviously makes a great candidate.”
Coaches are allowed to nominate one player from their team. After reviewing nominations, the organization chooses 60 players from the pool. From there, the players are voted for online, and the six who receive the most votes are named finalists, earning a $1,500 equipment grant for their program. The finalists then submit a video outlining why they deserve the award. The grand prize winner receives a $5,000 grant for their program and is honored during a New York Giants home game in December.
Marra said he was caught off-guard by the nomination but is happy to be recognized for the hard work he has put into football. “When I was reached out to by the people at USA Football, it was really humbling because I’ve loved the sport for so long,” he said.
A three-year starter, and now a team captain, Marra has made it a priority in his senior season to set an example for the younger players on the team — and they’ve followed in his footsteps. “When things get tough in practice and the coaches aren’t happy with their progress, Luca is the go-to guy to get everybody fired up and focused,” Agovino said.
“He’s just a very hard worker,” Claudia said. “Luca is so dedicated to everything he does. I’ve never seen him give up.”
Luca, who also plays safety, has found inspiration from his favorite NFL player, Sean Taylor. Taylor, whose career was cut short after he was tragically killed in 2007, was known for his dedication and passionate play-style as a safety for the Washington Redskins. “Everyone who knew Sean Taylor saw that he was one of the best players despite his short career,” Marra said. “He showed that the work you put in will pay off on the field.”
Marra is unsure of where he wants to go to college but said he doesn’t plan on playing football after this year. Instead, he’ll be running track. He joined the men’s team last spring, and by the end of season he finished fourth in the county in the 400m hurdles.
Knowing this will be his last ride, Luca is solely focused on staying healthy and taking on the season game-by-game. “Football is something that’s really special to me,” he said. “It’s going to be sad to give it up at the end of the year.”
If you are interested in voting for Luca Marra, visit https://www2.usafootball.com/poll_management/userpoll/20 and click on the “Week 1” tab. Participants are allowed one vote every 24 hours. The poll closes on Sept 30.
Report an inappropriate comment