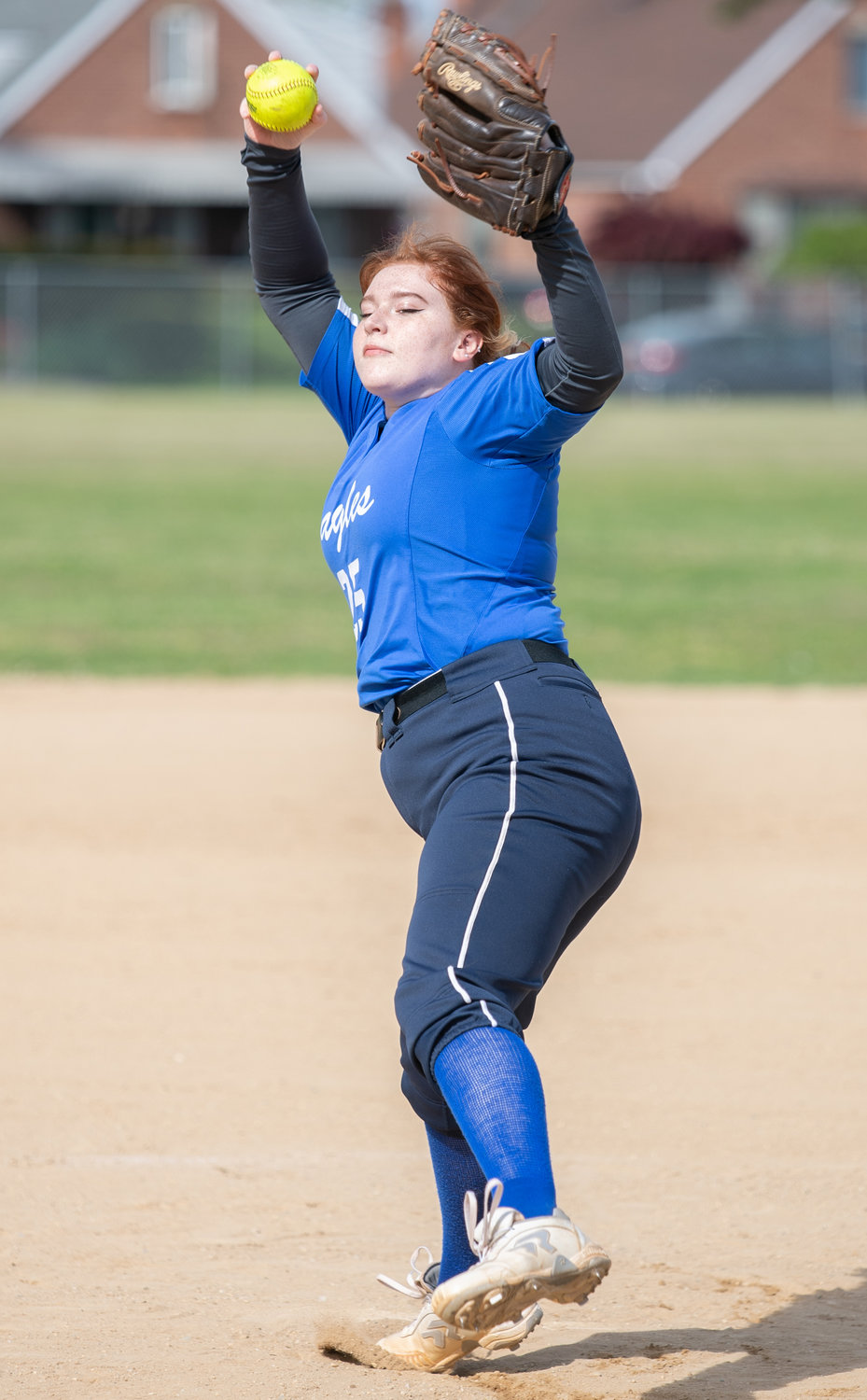 Senior pitcher Casey Woluewich put together another huge season for the Eagles, who aim to repeat as conference champs.
Media Origin Inc./Herald
By Jamie deJong

Valley Stream Central softball is looking to tie a bow on what has been a highly successful 2022 campaign.

With the season winding down, the Eagles are in prime position to repeat last year and win the conference championship. Coach Steve Sharkey was fully confident in this group heading into the year and his opinion is being validated.

“We brought back seven seniors, so we knew we had talent,” Sharkey said. “Last year we won our conference for the first time in 21 years. We weren’t sure if we were going to be bumped up to conference 6 and when we stayed, I did expect for us to have a good season. I did expect to compete for the conference, and we are.”

The standout play of the upperclassmen has been a major driving force for the squad. Senior pitcher Casey Woluewich entered the season with incredibly high expectations following an All-Conference award in 2021, and she has played up to that level and more this spring, amassing 13 winss. According to Sharkey, Woluewich is dominant. “She is by far the best pitcher in the conference,” he said.

Senior shortstop Tylyn LeSane is another player who came in with high expectations following an exceptional 2021, and like Woluewich she picked up where she left off. “She’s one of the top hitters and defiantly is one of the top fielders in the conference,” Sharkey said of LeSane. “I’m hoping the two of them can bring home individual awards this season.” LeSane has 5 home runs on the season. Seniors Emily Monfort and Maria Farqui have also been solid hitters at the plate for the Eagles.

The underclassmen held their weight as well, according to Sharkey. “Sophomore first basemen Elize Quezada and sophomore centerfielder Lexxie Adames have been having great seasons now and with the extra experience they will be players to watch,” he said.

Junior pitcher Emily Mota has also shown flashes in the stints she has pitched, and she should thrive with junior catcher Nadia Singh next season. It is worth noting this is the first year assistant coach Ms. Segovia has worked with the team, and Sharkey credits a lot of the kids’ development to her.

Unfortunately for the Eagles, despite what has been a stellar regular season, they will not be eligible for the postseason. They possess a 12-2 record in conference 7, but teams in conference 7 need to win 90 percent of games to qualify for the playoffs, so no team from the conference will make it.

It is disappointing the team’s performance will not be rewarded with postseason exposure, but the vision and goal has now been shifted to repeating what the Eagles did last year.

“Last year everyone made the playoffs due to COVID,” Sharkey said. “Part of me wishes that we were still in the running but winning the conference is our playoffs right now. We are going for that back-to-back conference championships.”