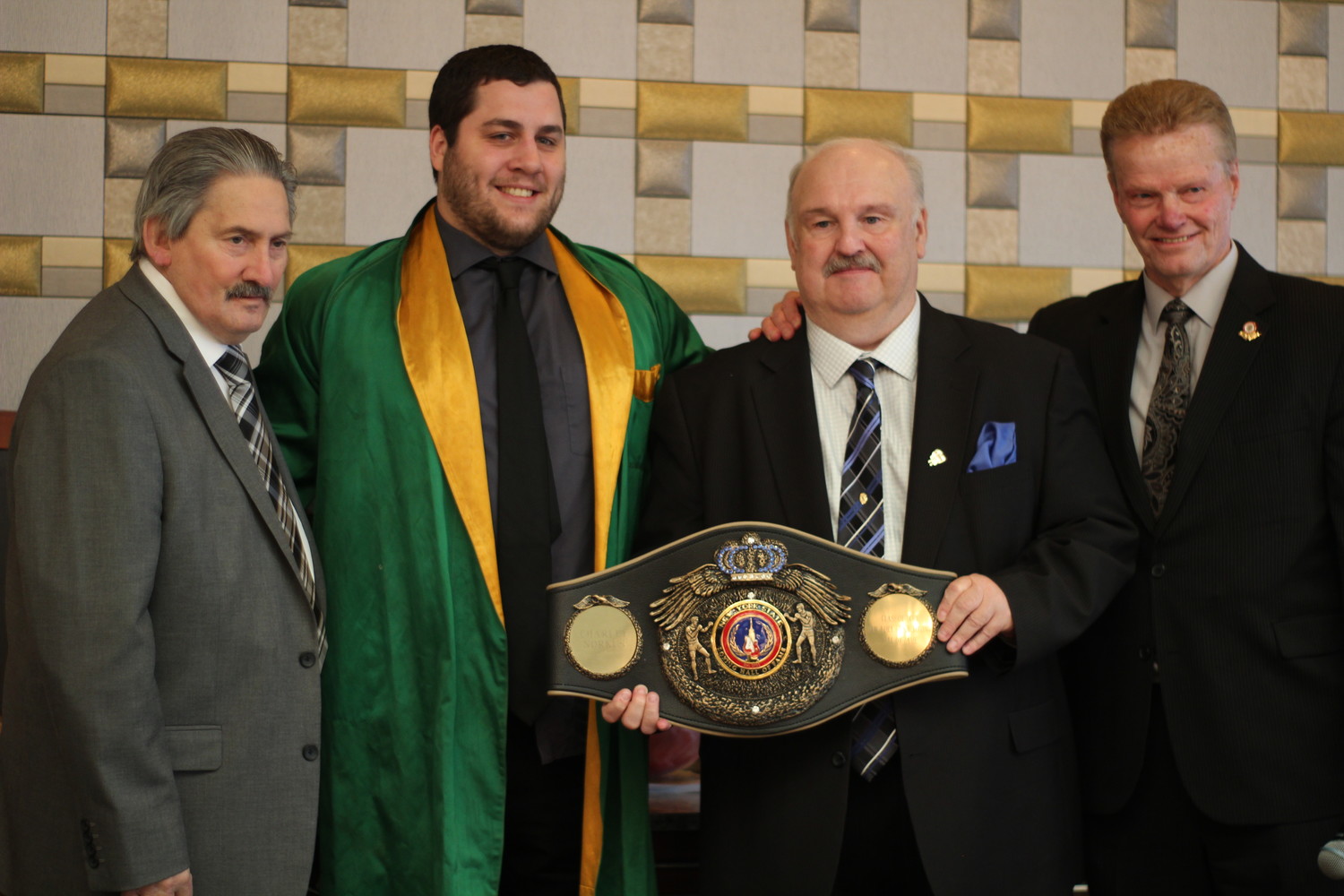 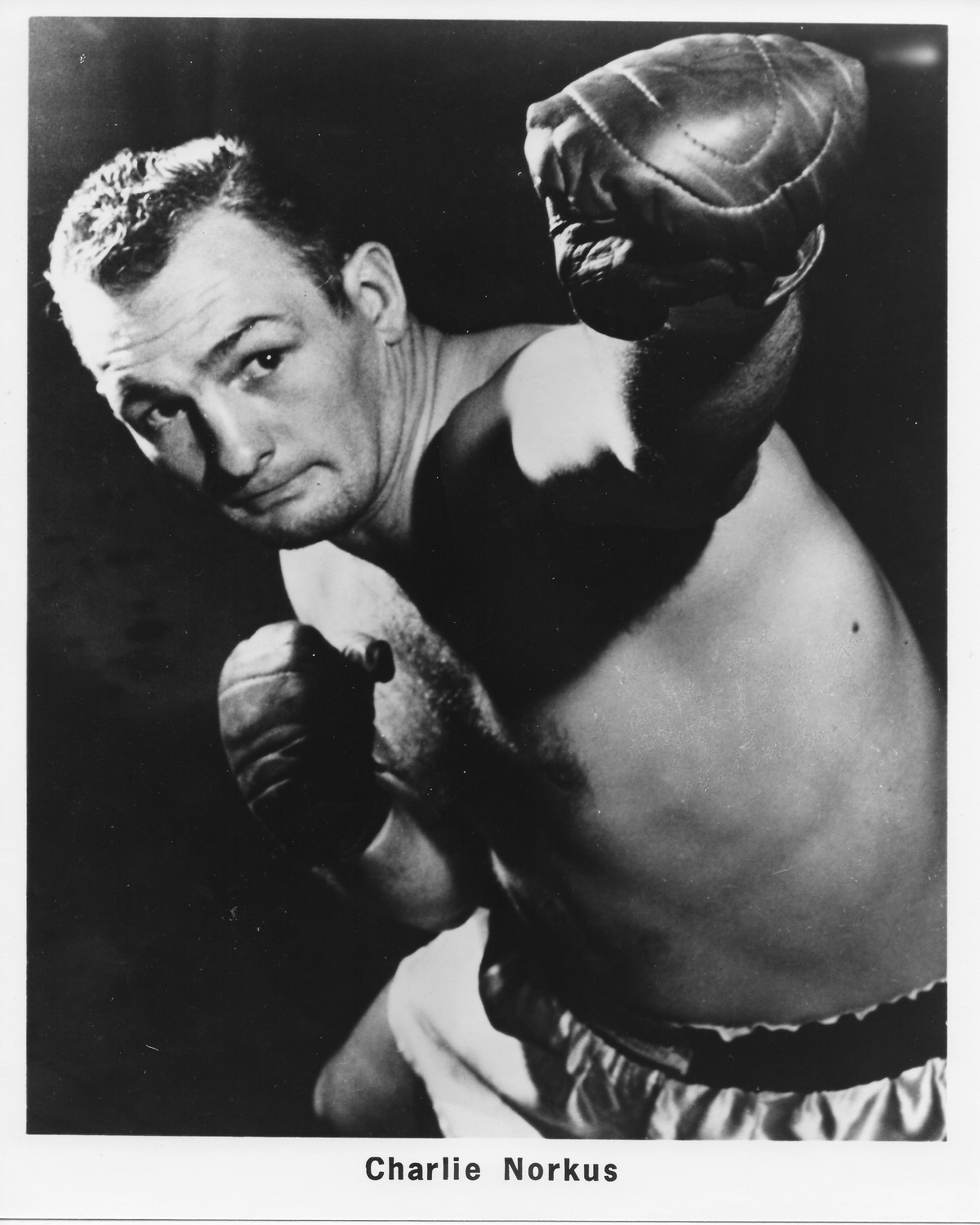 The late Charley Norkus, a heavyweight boxing contender in the 1950s and a former Wantagh resident, was posthumously inducted into the New York State Boxing Hall of Fame on April 29.
Courtesy Charles Norkus III 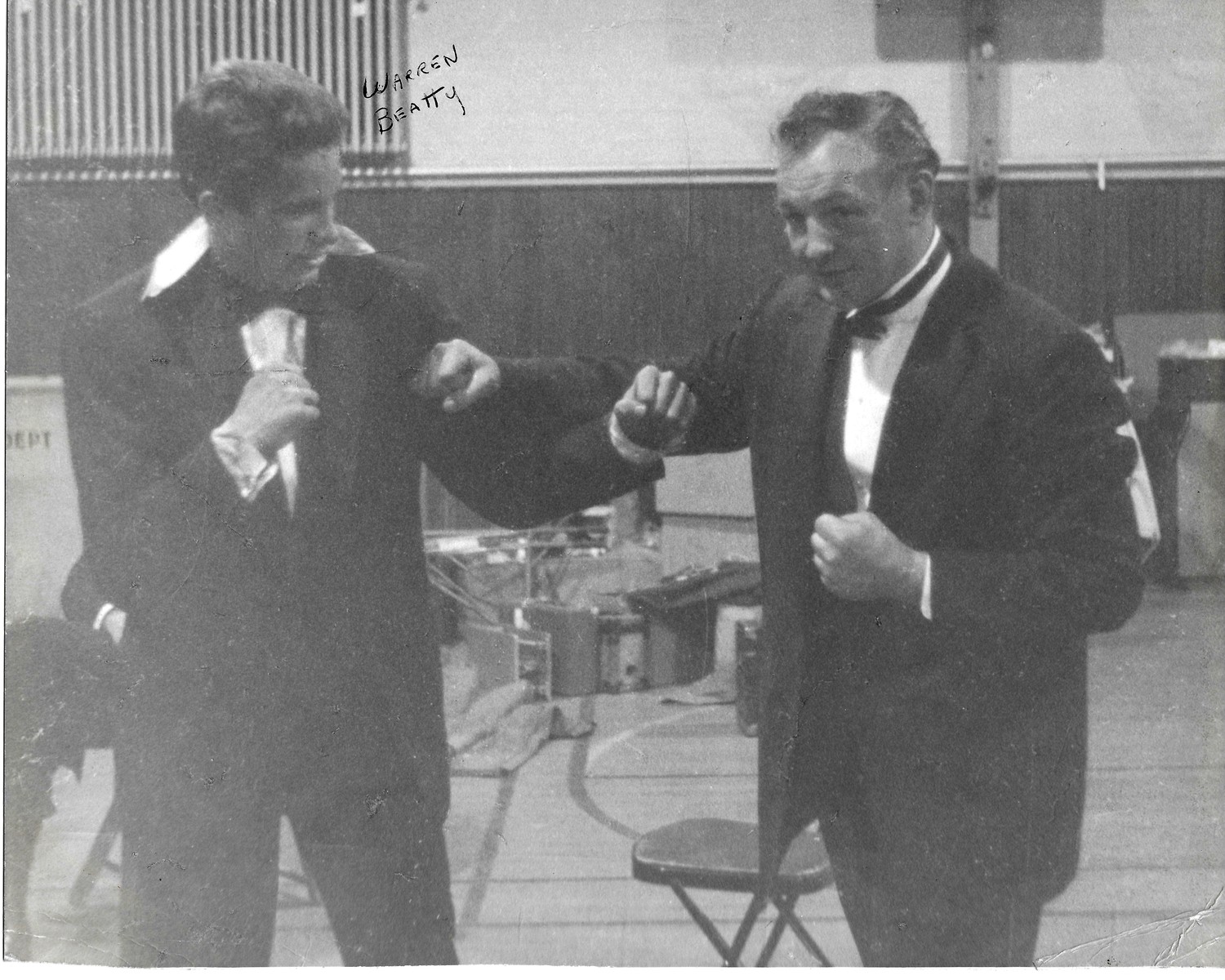 Norkus had a cameo role in the 1961 film “Splendor in the Grass,” beating up the character Bud, played by Warren Beatty.
Courtesy Charles Norkus III 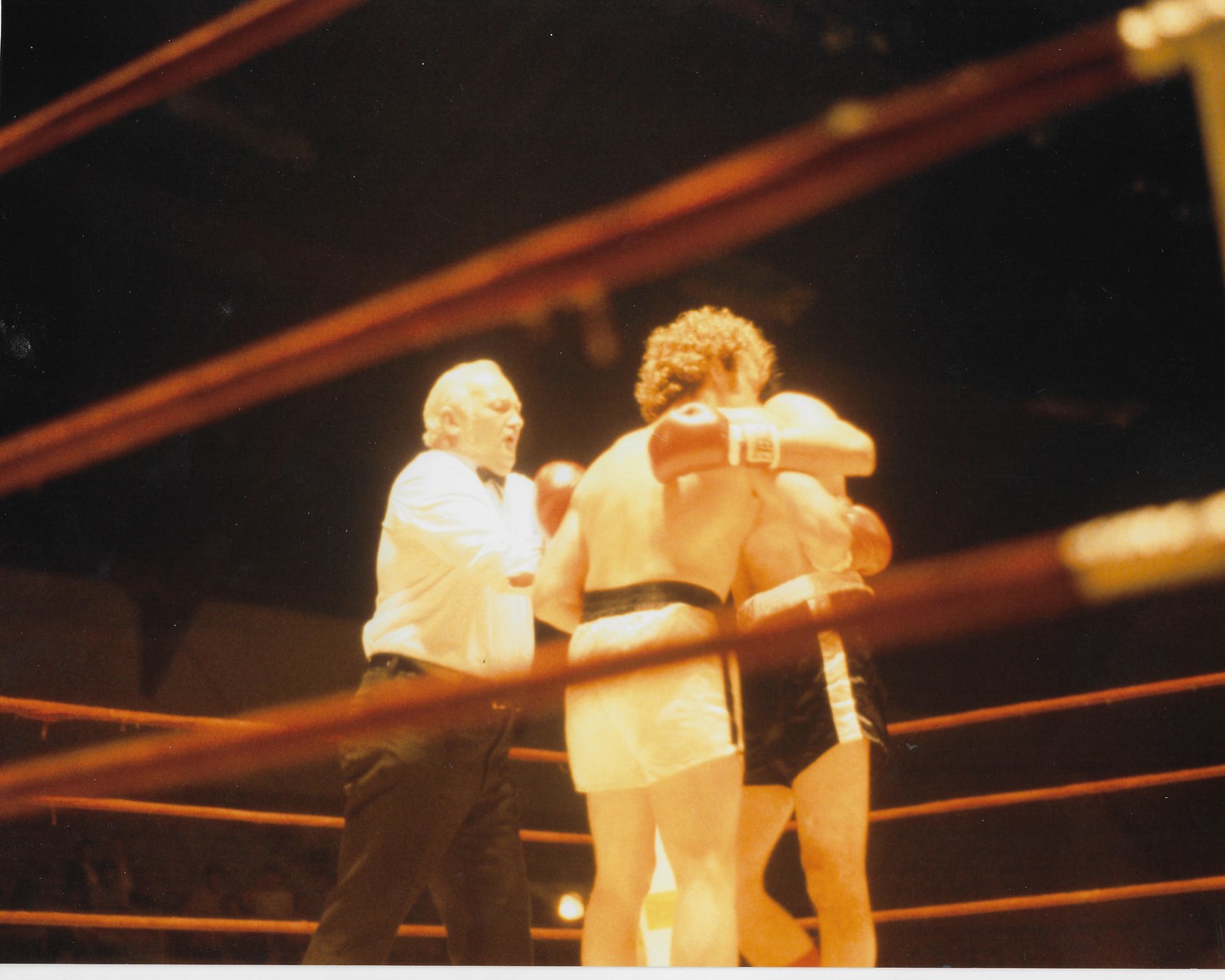 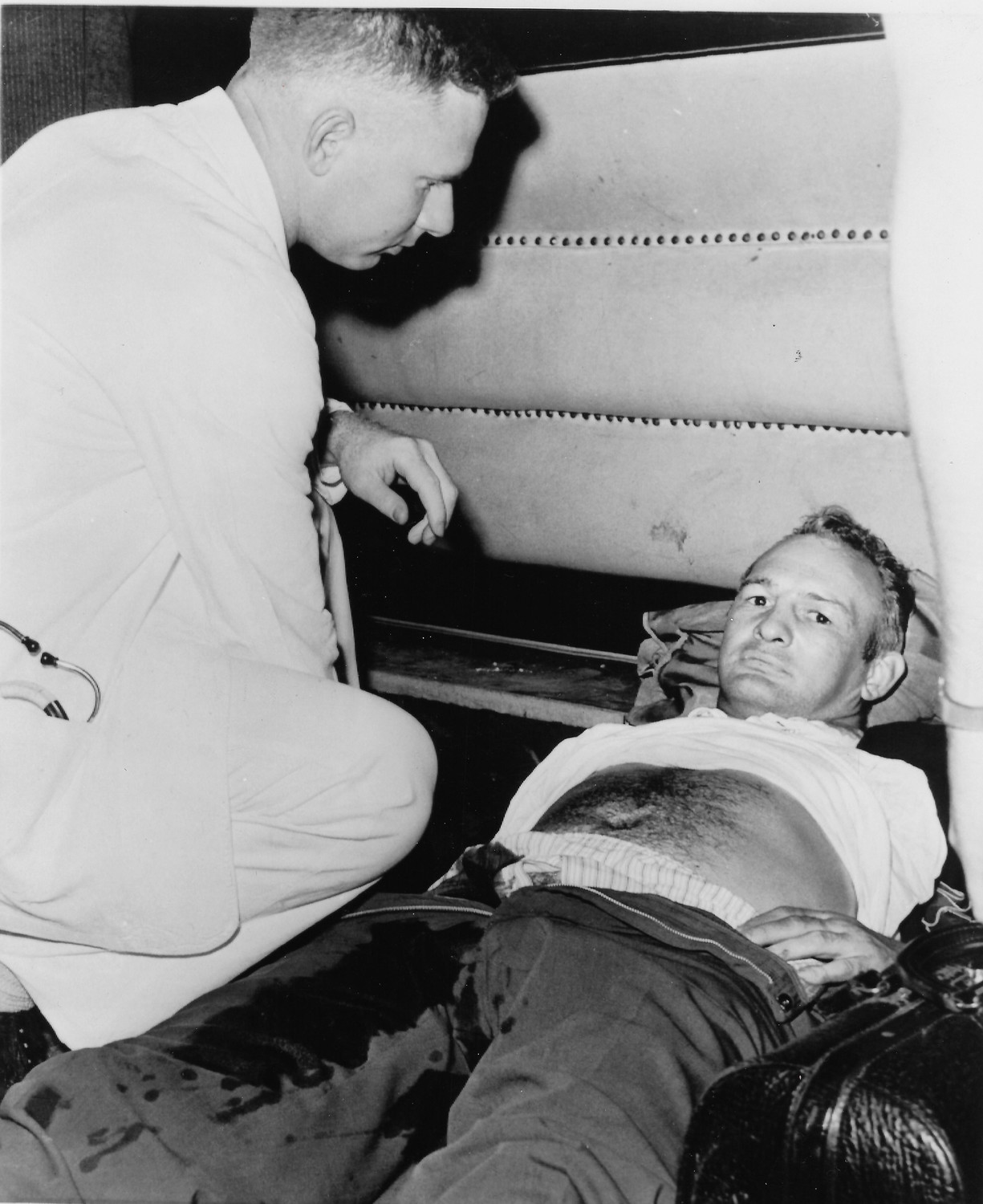 Norkus’s boxing career ended on Sept. 2, 1959, when he was shot twice while working at a bar in Manhattan’s Times Square.
Associated Press wire photo
Previous Next
Charley Norkus' Notable Dates

March 31, 1976 — Referees the only fight of Randy Gordon, current boxing radio personality and former chairman of the N.Y.S. Athletic Commission.

A sold-out crowd of 4,059 boxing fans filled the Miami Beach Auditorium on Jan. 20, 1954, to watch a fight between heavyweights Charley “The Bayonne Bomber” Norkus and Danny Nardico. The two former Marines combined for eight knockdowns in an absolute brawl, with Norkus eventually earning a ninth-round technical knockout after crushing Nardico on the ropes with several blows to the head.

The fight was highlighted at Norkus’s induction into the New York State Boxing Hall of Fame on April 29, when the former Wantagh resident was honored 22 years after his death. His son, Charles Norkus III of Wantagh, and grandnephew Tim Emmel, of Blue Point, in Suffolk County, accepted the award on his behalf.

Bob Duffy, president of the Hall of Fame and the nonprofit boxing organization Ring 8, spoke highly of Norkus’s career as a top 10 contender in a competitive heavyweight division. Although he did not know Norkus personally while serving as the New York State Athletic Commission’s director of boxing, Duffy explained that Norkus’s career outside the ring helped him into the hall.

“He was an excellent judge, an excellent referee, a member of Ring 8 for over 20 years and was a very charitable guy,” Duffy said.

Born on Aug. 28, 1928, in Bellerose, Queens, Charles Norkus II began boxing professionally after spending two years in the Marines Corps and winning the Marines, U.S. Navy and All-Service heavyweight titles. He eventually found his place among heavyweight legends Rocky Marciano and Ezzard Charles, but never won a title during his 10-year professional career. With a powerful left hook and military-grade endurance, Norkus amassed a record of 33 wins — 19 via knockout — and 19 losses.

“When the bell rang, he was coming right at you,” said Randy Gordon, a former chairman of the state athletic commission and now a boxing broadcast personality. “He was going to take no prisoners. Charley was all about making the fight. In today’s world, Charley would be extremely successful.”

Acting and officiating after a career-ending injury

On Sept. 2, 1959, Norkus threw out an unruly bar guest while working at a Times Square watering hole. Just before closing time, the patron came back and shot Norkus in the groin and thigh, effectively ending his boxing career. Despite the injury, Norkus remained a part of the boxing community, becoming a referee 15 years after the incident. He also made cameo appearances in several films, including “Splendor in the Grass” and “Breakfast at Tiffany’s.”

Former heavyweight contender Renaldo Snipes, who fought Larry Holmes for the World Boxing Council world heavyweight title in 1981, recalled Norkus refereeing some of his fights. “He’s one of the few honest referees we’ve ever had,” Snipes said.

Gordon put Norkus in the rare company of former fighters who became successful officials, comparing him to Randy Neumann, a former referee who worked more than 50 title fights involving boxers such as Mike Tyson and Evander Holyfield. In Gordon’s first and only boxing match at the Nassau Coliseum, a second-round knockout loss he remembers only hazily, he learned how Norkus liked to call fights down the middle, no matter who was in the ring.

“I took an absolute out-and-out nap, and he proceeded to count over me,” Gordon recalled. “And I got on his case playfully over the years. I said, ‘Why did you even count? Just wave it off!’”

Charles Norkus III, a former Wantagh Fire Department captain and a first responder on Sept. 11, 2001, remembered meeting up with his father for family picnics after they marched together in the hamlet’s annual Memorial Day parades. The Norkus family moved from Port Washington to Wantagh in 1963, where Charles II was already well known for his boxing career and as a liquor salesman.

“He participated in many of the restaurants and bars’ charity events,” his son said. “Needless to say, many of the people who went to golf and bowl wanted to be with my father.”

Charles III said that his father would show his fight videos to local organizations, such as the Wantagh F.D., for charity. One such viewing, in 1982, temporarily turned the department into a fire hazard; according to Charlie III, over 400 people crowded into a venue that held only about 200.

“He had a huge impact in Wantagh,” Charles III said of his father, who died in 1996.