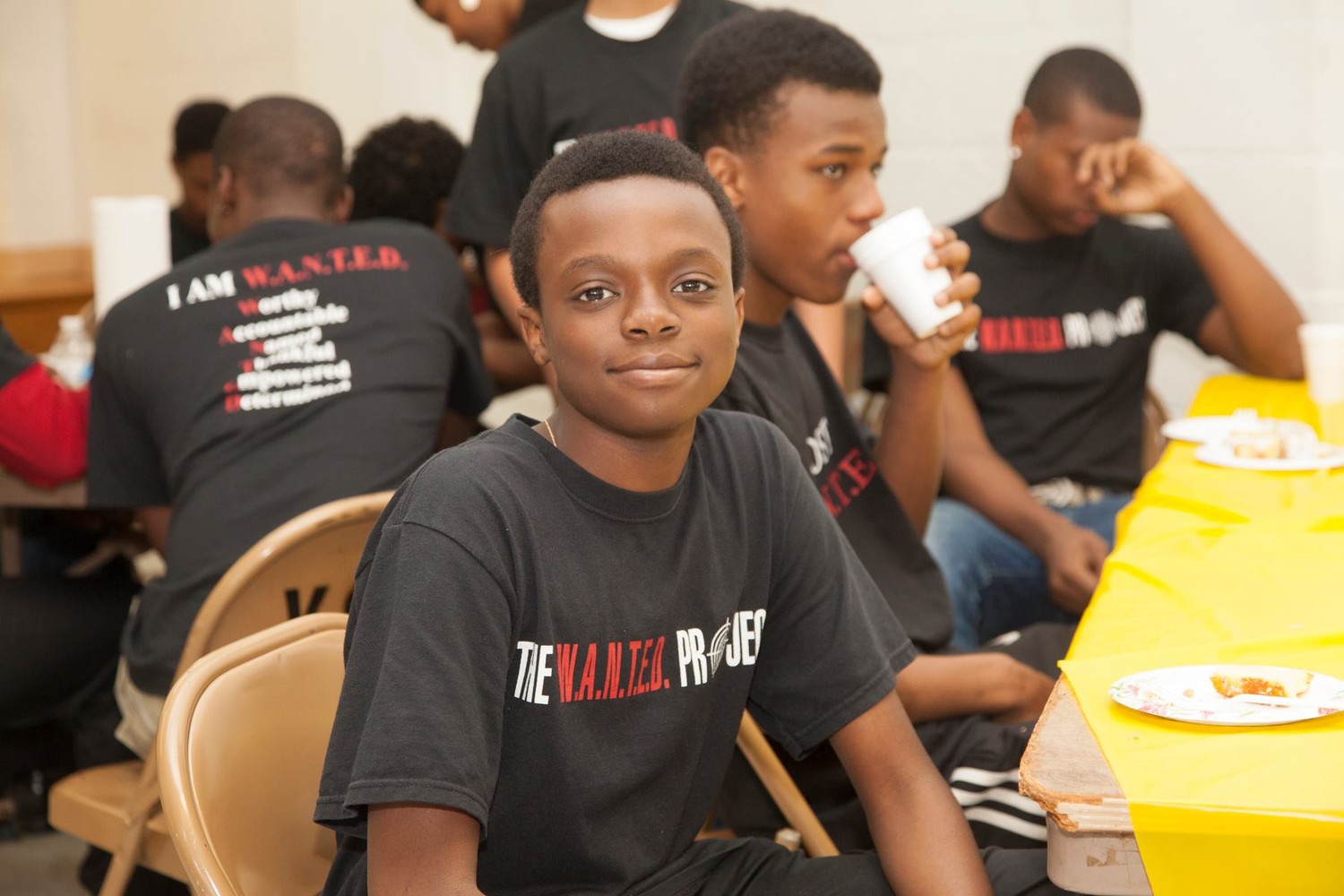 Elijah Johnson, pictured here in 2014, has participated in the W.A.N.T.E.D. Project for the past five years.
Courtesy Kymberly Clemons-Jones 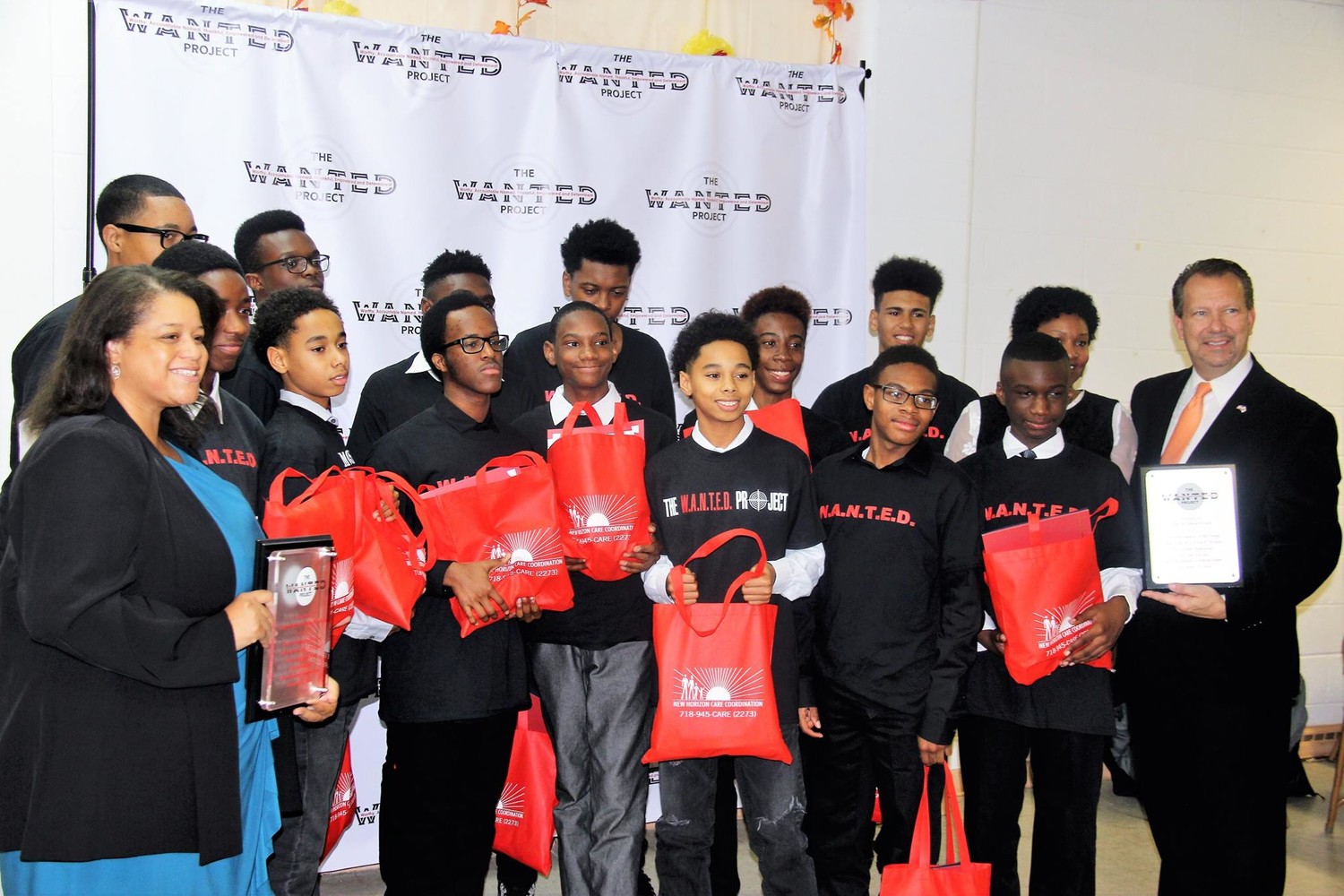 Local politicians, such as Assemblywoman Michaelle Solages and Mayor Ed Fare, have visited the W.A.N.T.E.D. Project.
Courtesy Facebook
Previous Next
By Melissa Koenig

In March 2011, Kymberly Clemons-Jones’ then 16-year-old son, Jeyson, was walking home from school when several kids hit him with a brick from behind. He had a concussion and could not remember any details from the four days before the assault.
“I was praying and saying our kids are wanted, and God gave me that acronym,” Clemons-Jones said, referring to worthy, accountable, named, thankful, empowered and determined.
It was at that moment that Clemons-Jones decided to create the W.A.N.T.E.D. Project, a free seven-week program, funded by donations and grants, to teach young black men between the ages of 12 to 18 to be good and responsible citizens. “We want them, instead of being wanted like the pictures in the post office, they’re wanted for those characteristics,” Clemons-Jones said.
Now in its seventh year, the program brings 18 to 24 students to the Valley Stream Presbyterian Church, every Thursday from 7 to 9 p.m. Clemons-Jones serves as the church’s pastor.
The night starts off with the kids eating dinner. Then, they listen to a successful black speaker share his or her life story. The students also learn interviewing skills, are visited by local politicians and once even performed spoken word poetry about the W.A.N.T.E.D. Project at the UniverSoul Circus in New York City. At the end of the program, the students receive a certificate of completion and celebrate their accomplishments with their friends and family.


“It’s very helpful and you can learn a lot from it,” said Elijah Johnson, from South Valley Stream. “And not just how to approach life after high school.”
As part of the program, Johnson said he learned “how to know your identity, be professional, be reliable and basically how to be a good citizen.” He started attending the program about five years ago because his mother encouraged him to join.
“It was about how colored men are profiled basically because of their skin color, and she wanted me to join just to see how it goes,” Johnson said. A few years into the program, Clemons-Jones asked Johnson to mentor the first-year students to teach them how to be accountable as citizens.
Another student, Jalen Smith, a 16-year-old also from South Valley Stream, has been attending the W.A.N.T.E.D. Project for the past three and a half years. Smith said he continues to enroll in the program because he likes the ethics he learns. “It’s excellent,” he said. “I’m in love with it and I go back every year.”

Overflow expected
Seven students have already signed up for this year’s class, which will begin on April 12 and continue until May 24. But Clemons-Jones said she expects there to be more students than those who pre-enroll. “We usually get eight kids who register and then 20 show up,” she said. “I have a feeling it’s going to be a big class.”
To further the program’s reach, Clemons-Jones wants to create chapters of the W.A.N.T.E.D. Project in Brooklyn, Queens, Boston and Connecticut. In 2016, the program also expanded to Ghana, where inmates at a detention center have to go through the project to be released. The director there helps the former inmates find jobs. In November, students in the Valley Stream class can visit Ghana to see how the program works there.
Students this year will also have the opportunity to work with other nonprofit organizations, such as Youth Build, a nonprofit that seeks to provide education, counseling and job skills to unemployed young Americans. Clemons-Jones also said that several boys’ and girls’ organizations have expressed interest in partnering with the W.A.N.T.E.D. Project in the future.
Violence statistics show that young men between the ages of 12 and 24 are most likely to be the victims of a violent crime, according to the organization’s website. And male teens are more likely to get into fights than females, and much more likely to die as a result of violence
To enroll in the W.A.N.T.E.D. Project, students or parents can visit thewantedproject.org, or call Clemons-Jones at (516) 405-0255.
Report an inappropriate comment