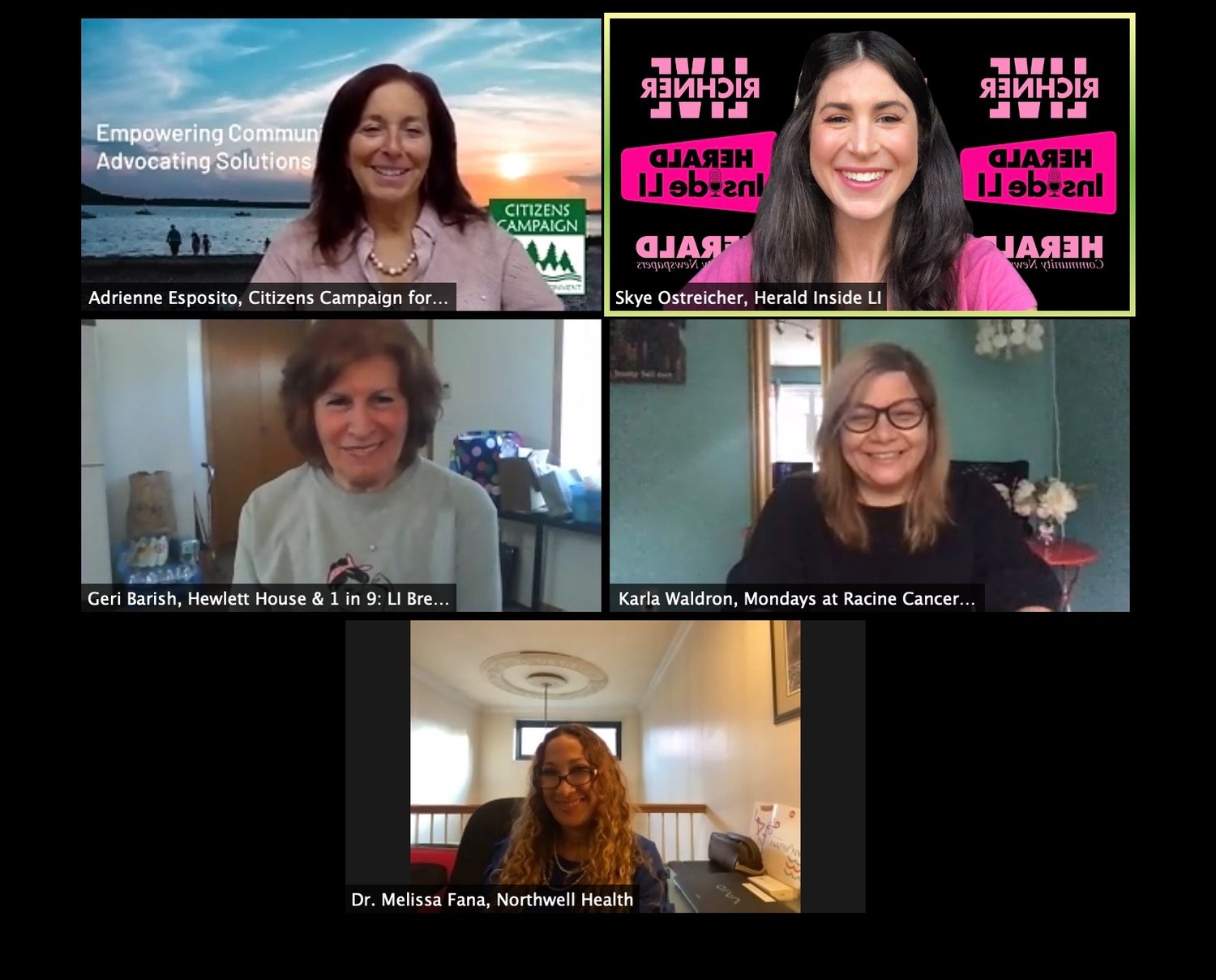 Three women embedded in the world of treatment and support for breast cancer patients, as well as an environmental advocate, spoke on the latest Herald Inside LI panel, a weekly webinar series on important topics impacting Long Islanders.

The virtual discussion, hosted by RichnerLive, a division of Richner Communications, publisher of Herald Community Newspapers, focused on risk factors for breast cancer, treatments for the disease and ways to find emotional support after a diagnosis.

Skye Ostreicher, of RichnerLive and Herald Community Newspapers, moderated the panel and delivered questions from viewers. Better Water sponsored the event, so aptly, Long Island’s drinking water was the first discussion topic. Jeannie Riccardo, CEO of Better Water, felt it was critical to sponsor this event to educate families about the importance of a having options for a good water filtration system.

“When people say to me, ‘do you think there is a correlation between the environment and health?’ I don't understand how anybody could say ‘no,’” Esposito said.

Esposito explained that Long Island is a sole-source aquifer, meaning Long Islanders get 100 percent of their drinking water from underground. This means that “everything we do on the surface of Long Island — we use pesticides, there’s a leaking gas station, a toxic waste dump site — all of that percolates down and mixes with the groundwater,” she said.

She also explained that pesticides are hormone mimickers, so they mimic female hormones and block male hormones in the body. They’re also “designed to kill,” she said, so if people put them on their lawn to kill bugs or weeds, they should also think about what they’re doing to humans.

Fana noted that other risk factors for breast cancer include BRACA-1, BRACA-2 and other gene mutations, family history, having no children or few children late in life and not breastfeeding. “The amount of years that a woman has unopposed estrogen and progesterone increases the risk of breast cancer,” she said. “We know that on LI there is a higher than average risk for breast cancer. We also realize that this risk is affected by certain chemical compounds.”

“We have multiple roots of exposure on Long Island, and it is of concern,” Esposito said. “The good news is that today, as a minimum, if you don't have a private well, that means your water is being tested at least four times per year or more and if there's something in your drinking water that exceeds the state or federal standard, the supplier is required to filter to at least those standards.”

In the ‘80s and ‘90s, Esposito worked with Barish and a group of women to create a pesticide registry on Long Island and raise awareness about what pesticides do to the drinking water and how that can cause some cancers. “I think it was a great pairing for the breast cancer movement to match up with the environmental movement,” she said.

Barish is a five-time cancer survivor — three times with breast cancer — and lost her mother to breast cancer. She also lost her son to Hodgkin’s disease. These experiences led her to find out “why?” She is now a leader in the community as president of Hewlett House and 1 in 9, which provide resources for residents in the county dealing with any kind of cancer diagnosis. She also continues to help raise awareness for the disease and its causes.

“When people come in, they’re afraid,” she said. “They don't have any idea about the different surgeries that they can have.

“It’s truly about good education, getting the information out,” she added, noting that the organization educates young people about cancer and environmental causes.

Waldron praised the work that Barish and Esposito have done to bring awareness to the environmental factors of cancer. “The more information we have as women,” Waldron said. “the better we all are. Information is power.”

When someone gets a breast cancer diagnosis, they can also seek resources and free programming through Mondays at Racine, which offers free one-on-one consultations, meditation, yoga, chair yoga, reiki, nutritions services, beauty lessons and other support services at 16 different locations across Long Island.

Mondays at Racine’s programs are both virtual and in person during this time, and they are more popular than ever since Covid-19 hit, she added.

Covid-19 has also impacted breast cancer testing, Fana said. Technology systems have advanced at Northwell so that patients don’t need to wait long for results. They can also reach their doctors quickly through telemedicine and new online platforms.

“It’s not likely to find a lot of positives through a pandemic,” Fana said, “but this is one of the positives that has come out of this unprecedented time.”

Fana also expressed pride in Northwell’s combined mastectomy and vasectomy surgery, which includes reconstruction, so a patient who needs these procedures does not need to go through it more than once. Northwell also has a high-risk program, which calculates a patient’s lifetime risk for breast cancer.

“I always tell patients, ‘don't worry the city has come to you,’” she said. “You don't have to go into the city for high quality care.”

Visit liherald.com/insideli to view a recording of this webinar and to register for upcoming webinars.