Welcome to the Grindhouse II 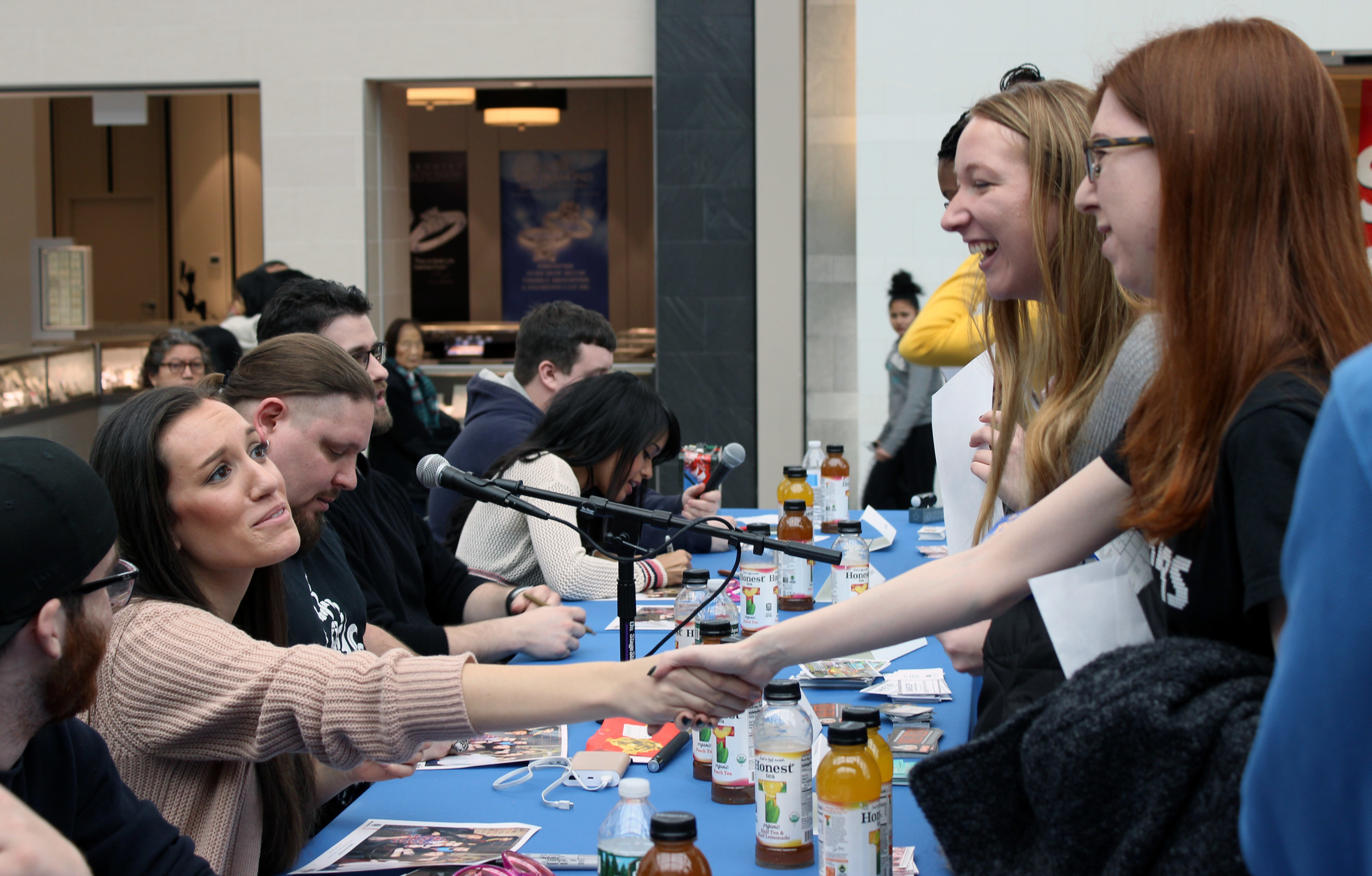 Grindhouse Radio co-host Kim Adragna, 22, of Merrick, connected with her fans at a meet-and-greet at the Broadway Mall in Hicksville.
Brian Stieglitz/Herald Life 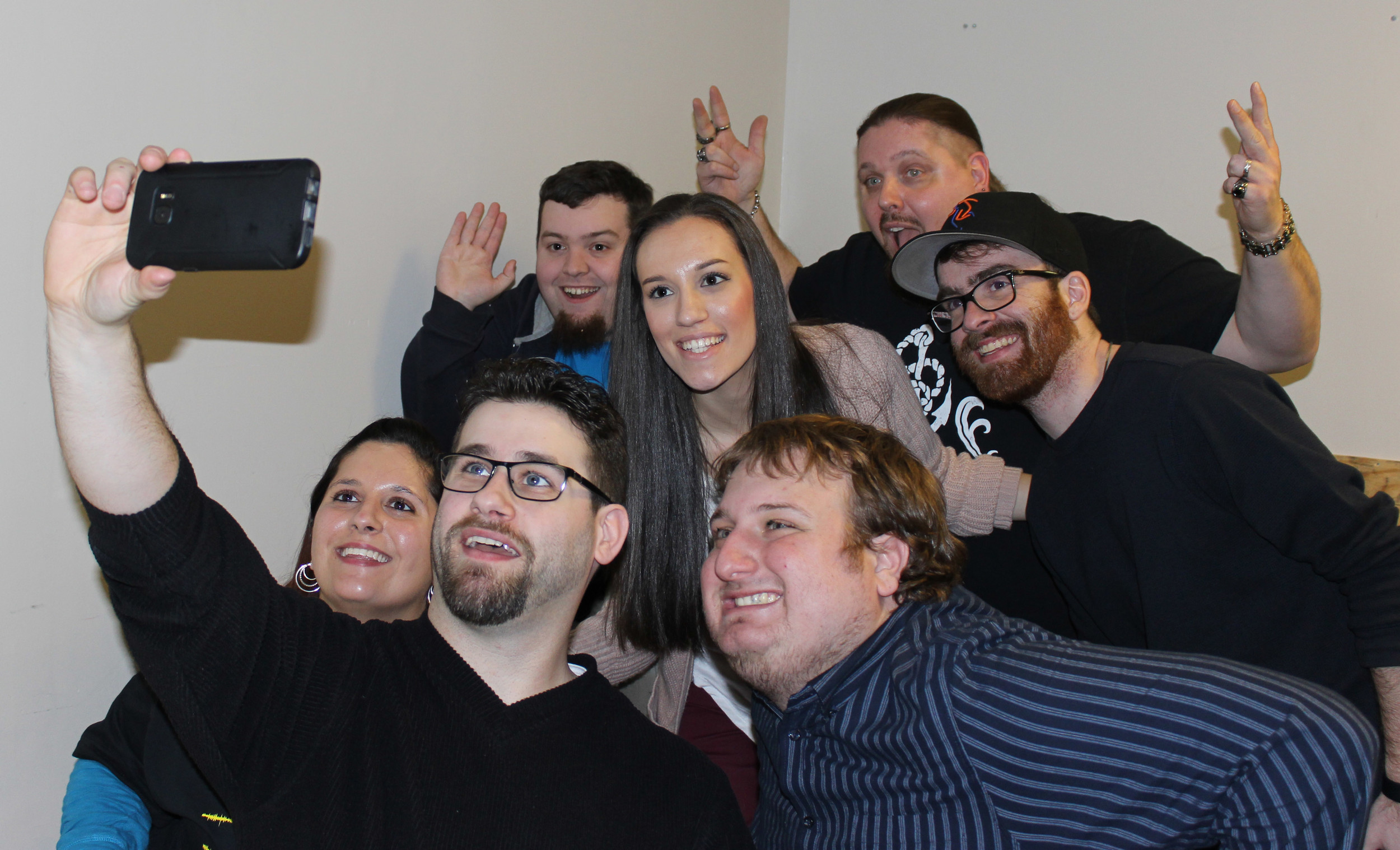 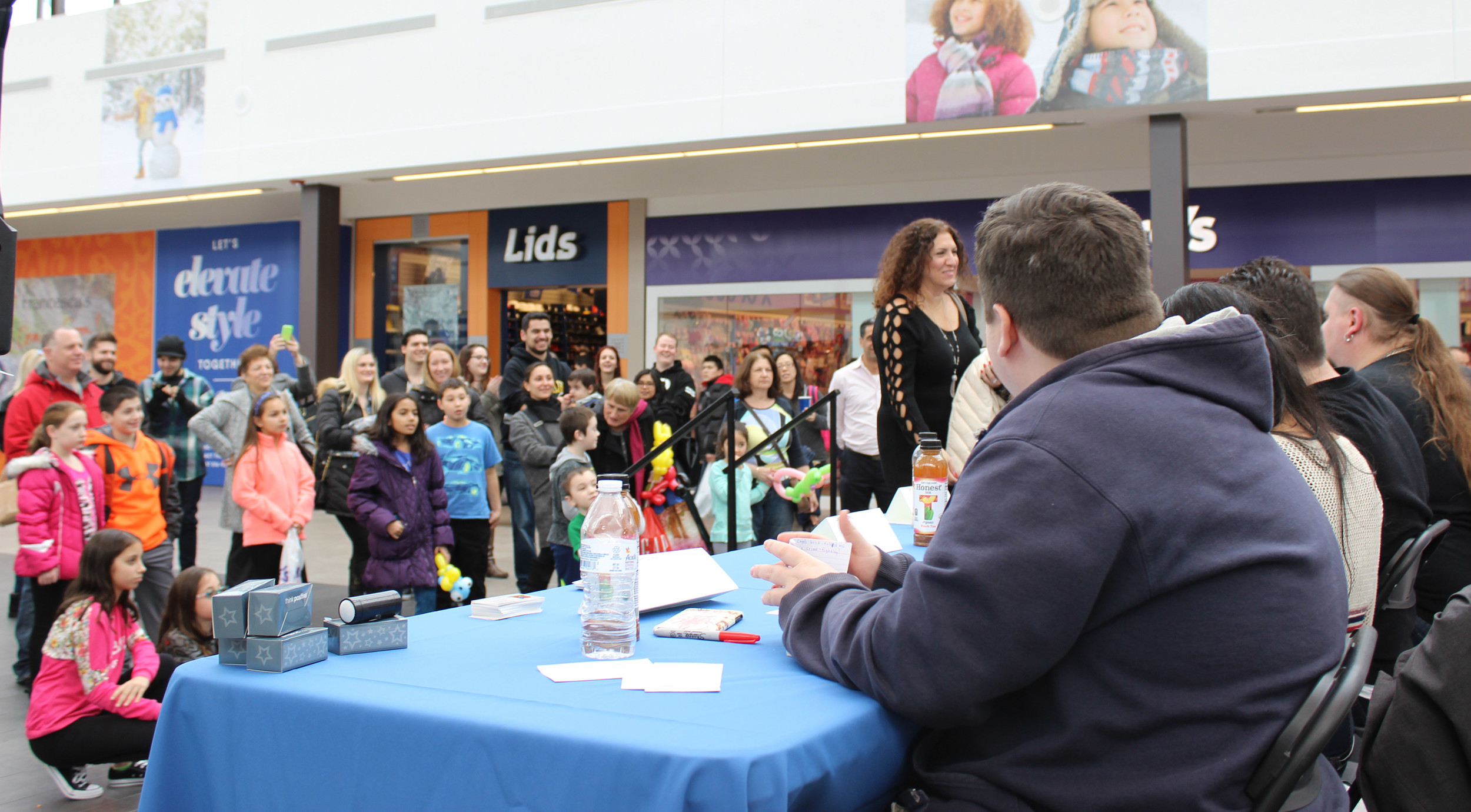 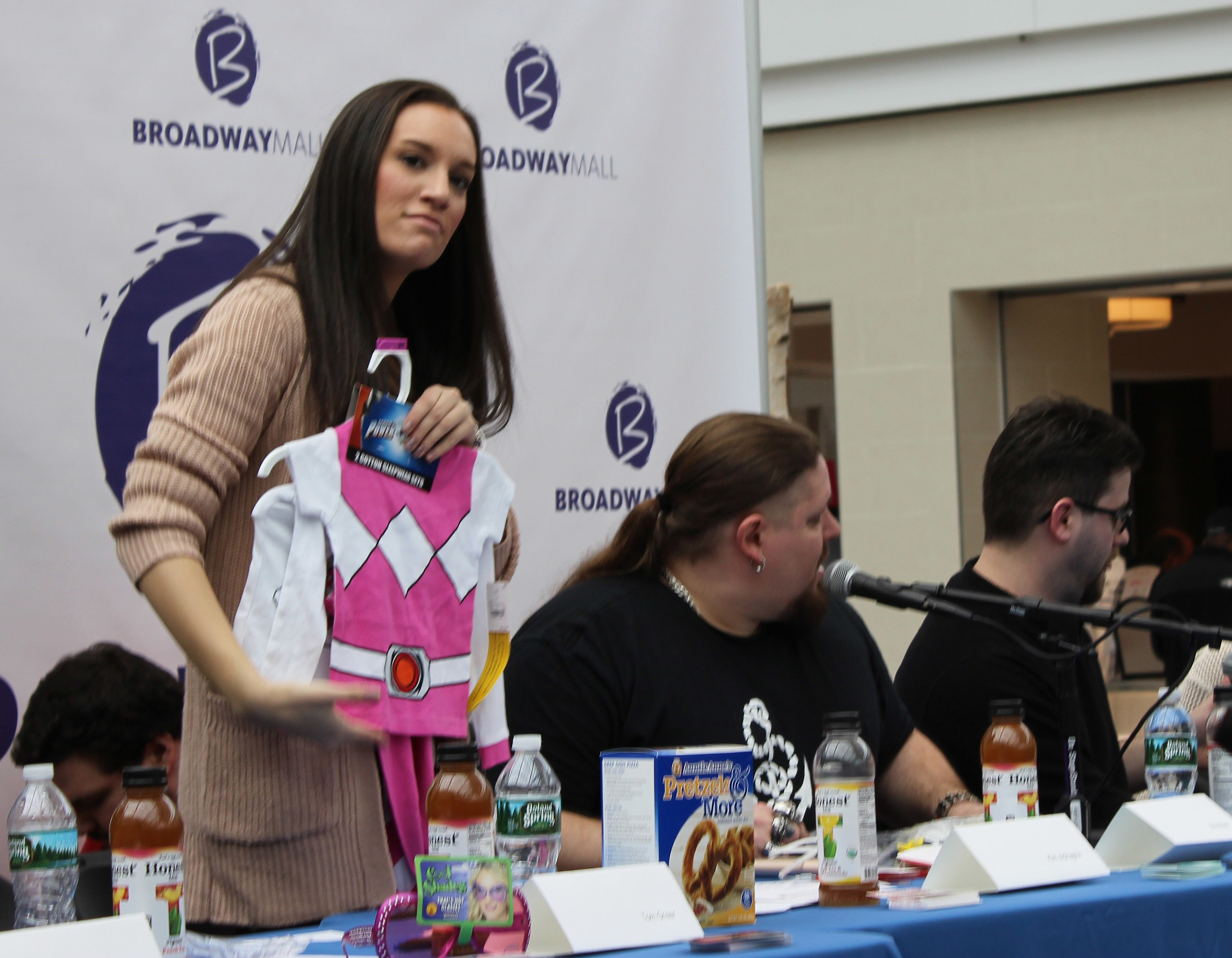 Grindhouse Radio co-host Kim Adragna, 22, of Merrick, prepared to give away a children’s Power Rangers outfit to whoever could guess which actresses played the character in the original movies. The Grindhouse cast will host a pre-screening of the new film next month at the Bellmore Playhouse.
Brian Stieglitz/Herald Life
Previous Next
By Brian Stieglitz

Shoppers at the Broadway Mall in Hicksville crowded around the personalities of Grindhouse Radio, an online pop-culture talk show that features a Merrick native as a host, and recently won the Bethpage Best of Long Island Best Radio Station title.

“I’m selfie-sticking,” said the show’s creator, William Kucmierowski, also known as Brimstone, 42, of Levittown, as he held his phone in front of him to take a photo with the crowd. “I feel so ridiculous.”

“He just lost all his credibility,” added co-host Stephen Zambito, or Zambo, 25, of Stony Brook.

To celebrate their achievement, the cast held a meet-and-greet at the mall on Feb. 11, signing autographs, taking photos with fans and giving out dozens of prizes, including custom-made Grindhouse Radio merchandise.

Co-host Kim Adragna, 22, of Merrick, admired a wireless phone speaker adorned with a graphic of Kucmierowski, Zambito and herself atop a giant microphone. “I kind of want to throw these at people,” she said, reaching into a box of them and tossing them into the cheering audience.

Kucmierowski’s face lit up as he picked up another piece of merchandise. “Ooh, who wants to catch a glass mug?” he shouted.

Earlier this month, the cast was recording their show in a crowded Albertson studio when they found out they had been voted best radio station in Bethpage Federal Credit Union’s annual contest. “I cried,” Adragna said. “I was so excited, I cried.”

Since they had been nominated, Kucmierowski had been checking his email for updates on the contest. Earlier this month, he had finally found a congratulatory message from Bethpage Federal that had been sitting in his spam folder for two weeks. After sharing it with the cast, he contacted the Broadway Mall.

Steven Cox, a friend of Adragna’s, stood among the crowd. He said he had seen her promote the show on Facebook when it had just started airing. “Then all of the sudden — boom! It just blew up,” he said.

Hassan Daoud, another friend of Adragna’s, donned a sweatshirt that read “RamNation,” the radio show that Adragna helped start when she was a student at Farmingdale State College. Daoud said that it was surreal to hear a fellow student on an award-winning show like the Grindhouse Radio.

When asked what they think propelled them past other Long Island-based shows that air on stations like WBAB, WBLI and 94.3 The Shark, the group bounced responses back and forth but came to no conclusion. “It’s a lot to beat guys that have 24-hour programming,” said Zambito.

Kucmierowski agreed, and said that the personalities at those stations are popular, but stuck in a traditional media landscape that prevents them from reaching a modern audience. According to him, they are expected to play mainstream music and spend less time talking to their fans.

“You can’t get as much of their true persona out,” he said.

“And people want to connect with people,” Adragna added.

Tom Greer, who co-hosts a sports-themed segment of the show called the Peanut Gallery, likened the show’s success in the new media landscape to explorers settling the Wild West. “People aren’t necessarily just tuning into their radios,” he said. “A lot of it [involves] internet streaming, pulling up podcasts and getting whatever you can on your phone.”

The Grindhouse Radio will be featured in a Best of Long Island compilation produced by the Long Island Press at the end of this month. They will appear at a Winner’s Event in March. More will be announced about the event in the magazine.