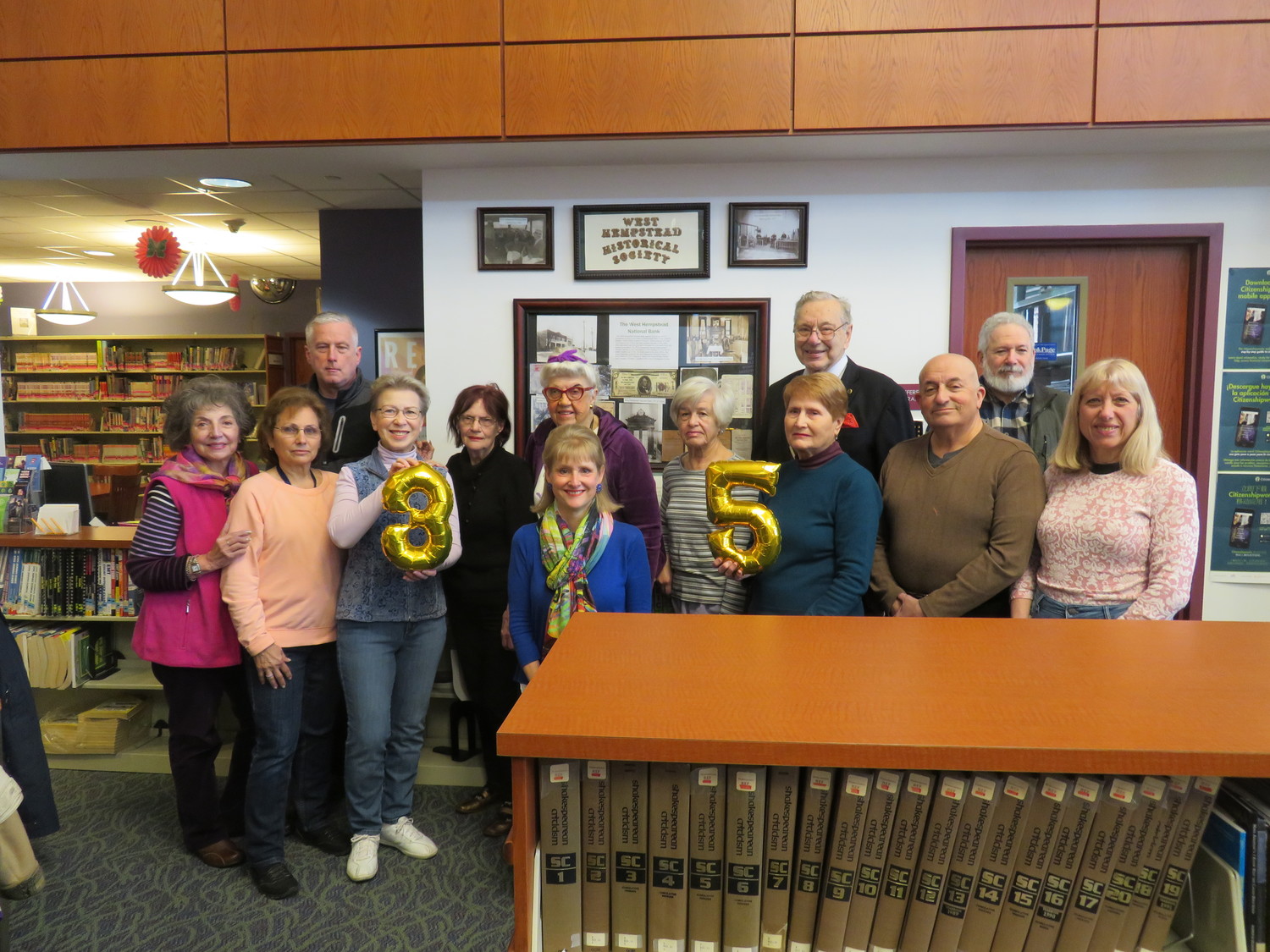 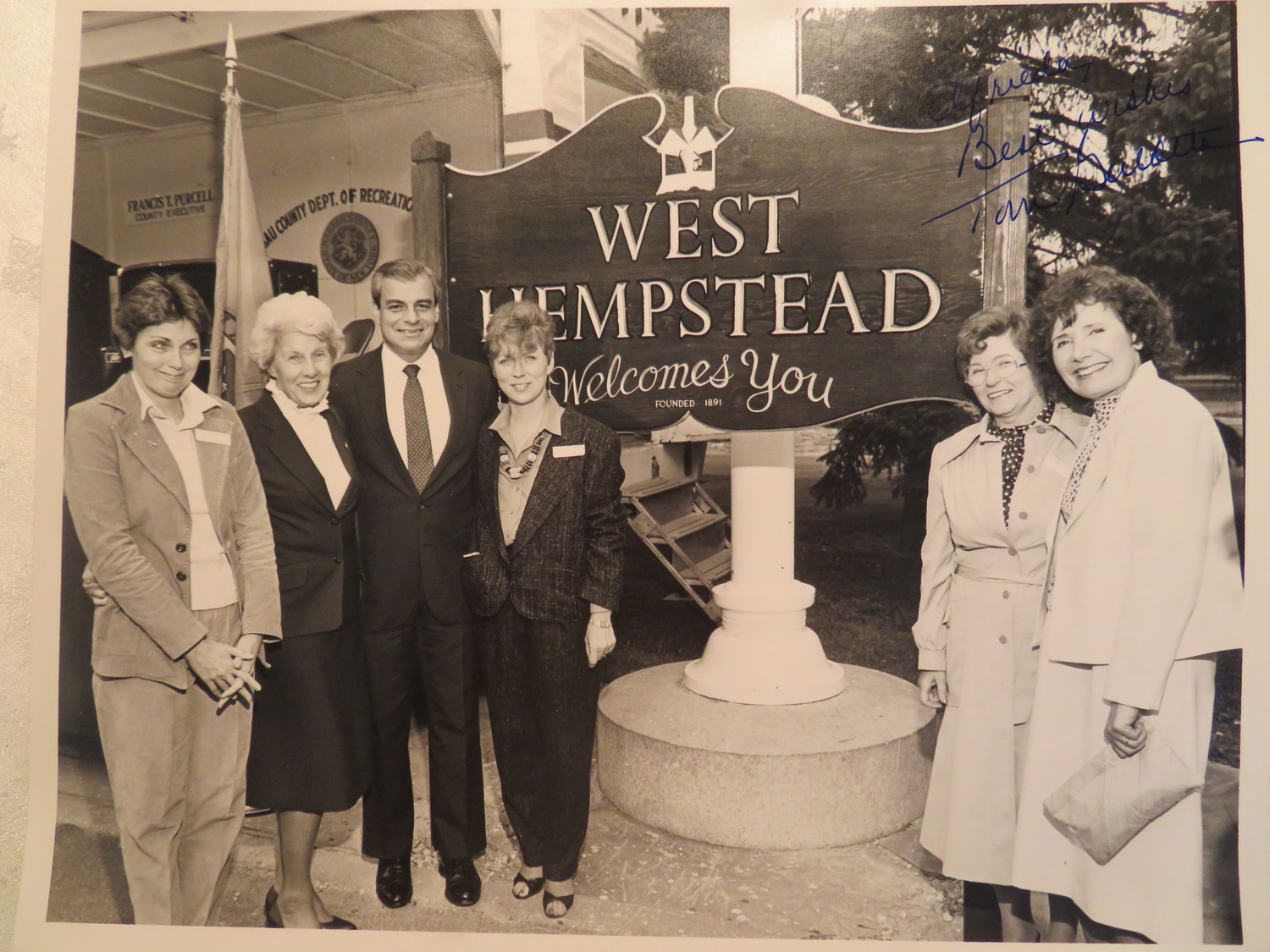 This year marks the West Hempstead Historical Society’s 35th Anniversary operating as a state chartered organization. The group’s new Facebook photo features gold ribbons on the “Welcome to West Hempstead” sign at Hall’s Pond Park and gold bows on their historical display at the West Hempstead Public Library.
Early planning efforts, as well as the election of a board of trustees, started a few years before the official charter date of 1983. The original trustees were Howard Bertenthal, Philip Crowley, Easa Easa, Daniel Groden, Anne Gucker, Dorothy Kozel, Ann Harrington, George Lipper, John Scholfield and Barabra Snyder. In the early 1980s, the society had over 250 supporting members. These early members scoured the community for old photos, artifacts and documents, which told the story of West Hempstead. Then, the members set up an archive in which to preserve them with the help of the school administration at Chestnut Street School. A historical timeline of the area and newsletters were written, and the early society transported glass display cases to local banks, the library and the post office to provide historical presentations.
Members sponsored “high teas” and “square dances” to fund their projects. The West Hempstead Historical and Preservation Society worked for the preservation of the Logetta Log Cabin on Nassau Boulevard, performed preliminary excavation inquiries about the locomotive from the rail disaster in 1875, which is believed to be buried beneath St. Thomas Annex by Hall’s Pond Park and saw the transport of the historic Bedell House to Old Bethpage Village Restoration. Dreams were realized when the wooden “Welcome to West Hempstead” sign was dedicated by the society at Hall’s Pond Park in 1985.
History has impacted the society and how it communicates historical information to the community. Now the group post information on its Facebook page, at westhempsteadhistoricalsociety@facebook.com once a month. The historical society is storing its archived photos digitally on www.newyorkheritage.org, in concert with the library. Just look under collections, West Hempstead Public Library on the site for beautifully enhanced and restored photos with meticulous comprehensive descriptions. Also, the society provides four themed displays annually at the library, two permanent displays in the community room and the lobby and multiple displays throughout the year at the post office. The glass cases are a thing of the past and have been recycled as they clean out their physical archives at Chestnut Street School.
In addition, the West Hempstead Historical Society loves to celebrate with the community and take part in historical anniversaries. The group starts off each year by ringing the school bell at Chestnut Street School to mark the historic building’s anniversary. This year, the school celebrated its 105th anniversary. The historical society always marches in community’s annual Memorial Day Parade and creates a historical display booth in the Fall Festival. In recent years, the group celebrated the 50th Anniversary of the West Hempstead library, the 85th Anniversary of Reisterer’s Bakery and the installation of the 911 Steel Monument at Hall’s Pond Park. The group is available for school history events and is proud to have installed permanent displays at the three elementary schools and the school administration lobby.


The old wooden “Welcome to West Hempstead” sign has been replaced by weather bearing plastic but the sentiment and the pride in our community remains the same. Residents are welcome to enjoy all of their efforts. Meetings take place the third Wednesday of each month, September through June at 9:30 p.m. at the library. The group welcomes new members and new treasures for the archives to share with the community.