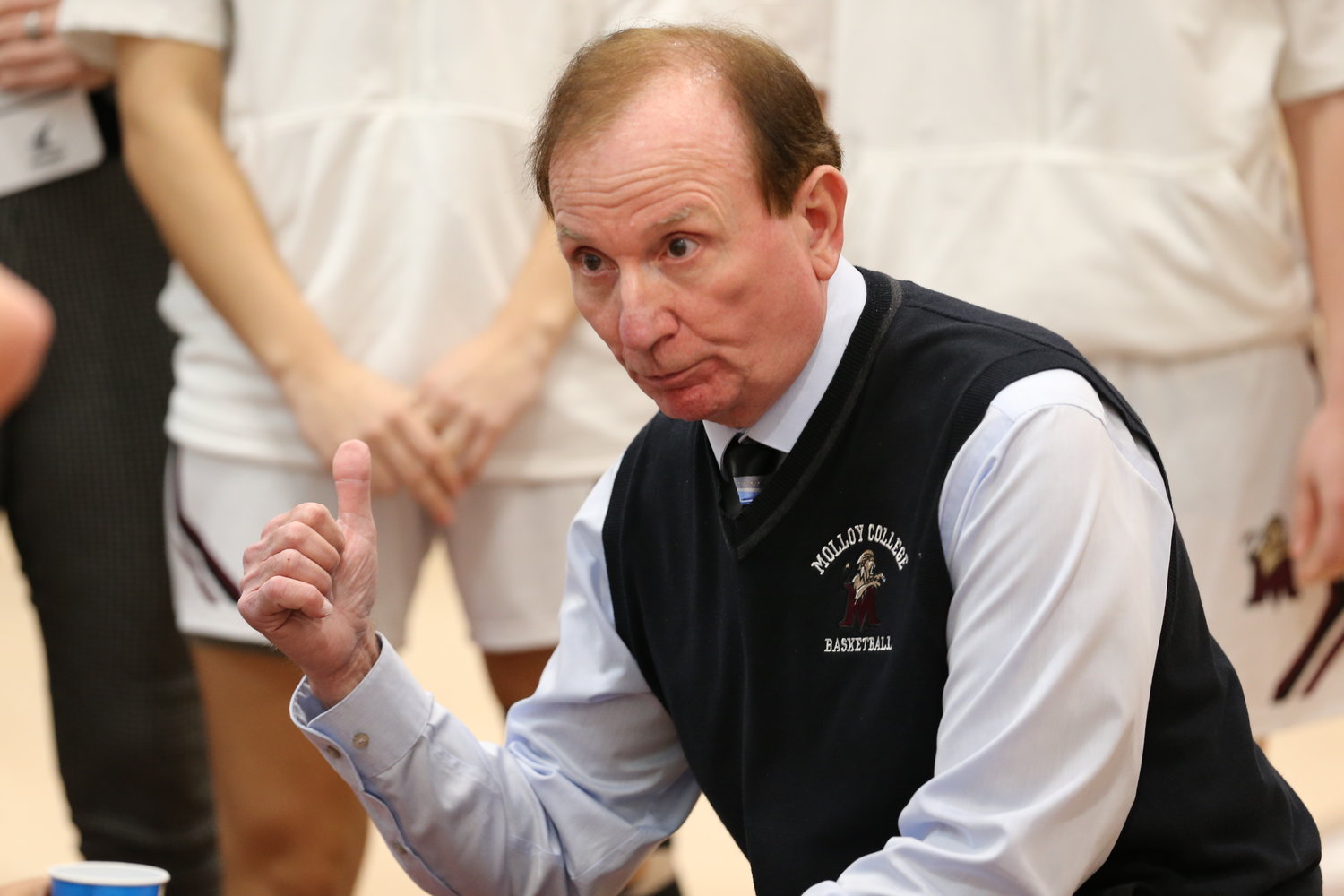 Molloy College women’s basketball coach Joe Pellicane will be inducted into the Suffolk Sports Hall of Fame on May 18.
Courtesy Molloy College 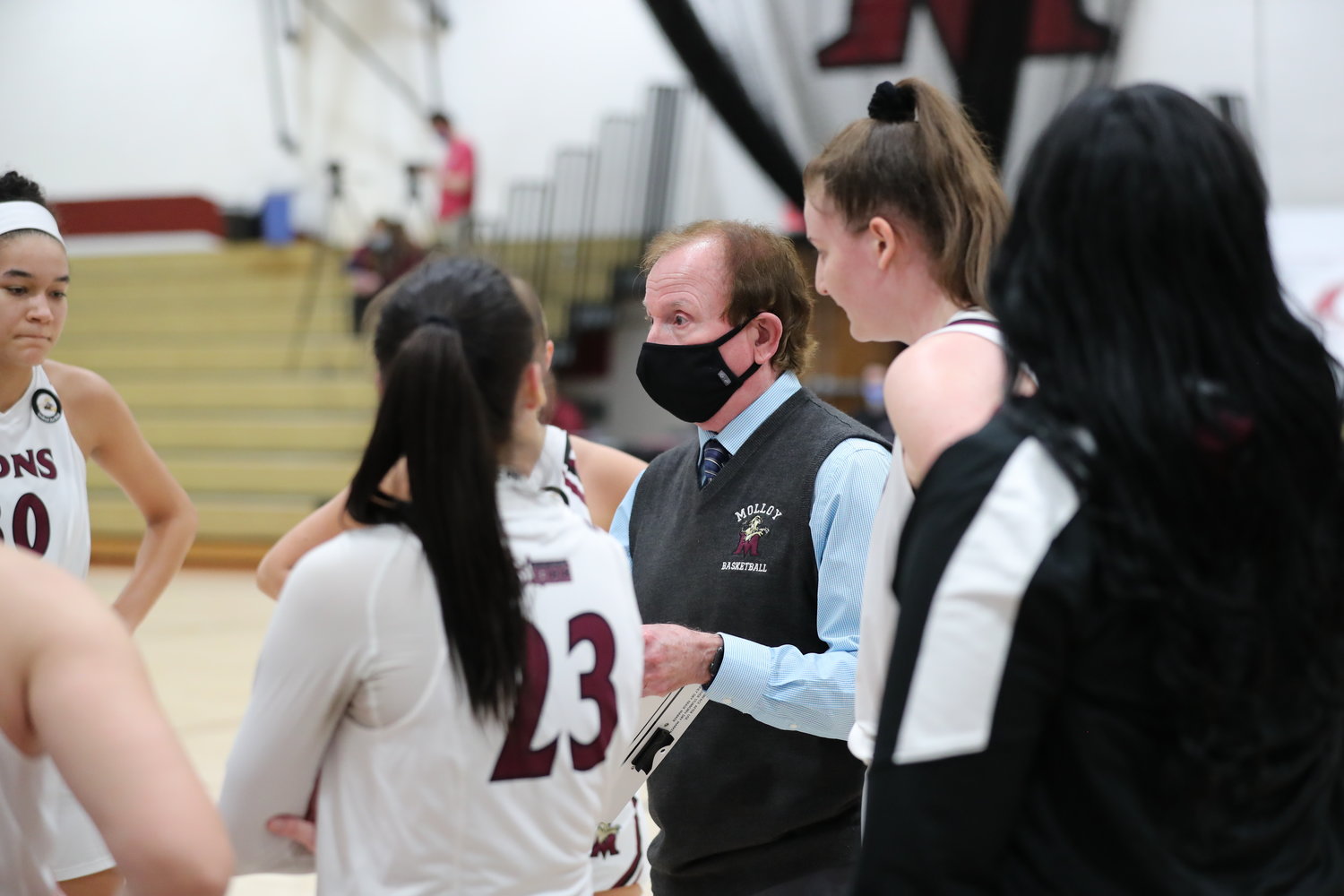 In March 2020, Molloy College women’s basketball coach Joe Pellicane knew he had to break the harrowing news to his players that the NCAA tournament had been canceled, and their season was in jeopardy due to the fast-spreading coronavirus. After informing his disheartened team, he threw a ball to senior shooting guard Kathryn Gibson, told her to imagine there were two seconds left on the clock in the national championship game, that the team trailed by 2 points and she needed to sink a shot to win it all.

“I didn’t know what was happening,” Gibson recalled. “I got the ball, just kind of threw it up and it swished right in. He began playing ‘We are the Champions,’ and it was a really nice feeling. For us seniors, we knew our career was ending in a bad way, so he really just tried to make the experience seem as good as possible.” To add to the fantasy, Pellicane had his players cut the net down in a symbolic gesture, as if they had won the title.

In recognition of the relationships he forged with his players and their success stories on and off the court, Pellicane, a Deer Park resident, will be inducted into the Suffolk Sports Hall of Fame as part of its class of 2022 on May 18 at East Wind in Wading River.

Pellicane, 74, has coached men’s and women’s basketball for over four decades, the last seven years at Molloy, where he has led the Lions to four NCAA Division III tournament appearances, including the Sweet Sixteen in 2017.

He began coaching men’s hoops at Suffolk West Community College in 1980. After various stops including SUNY Farmingdale, St. John’s University and Hofstra University, he decided to switch to the women’s game at Dowling College in 2000, after coaching his daughter in AAU ball. He led the Dowling women to the Division II national championship game in 2013, which it lost, 71-56, to Ohio’s Ashland University. Pellicane, who came to Molloy in 2015, is 541-381 overall in his career, and 259-190 as a women’s coach.

Though he said he was honored to be recognized, he also noted that the award belongs to his family, his assistants, his mentors and the many players who have been part of his life through the years.

“This is not about Pellicane,” he said. “When these things occur, it’s always — sincerely, sincerely and truly, it’s about all the people you’ve been involved with, and I’ve been lucky to be a teacher and coach to in my life.”

Pellicane said he fell in love with basketball when he began playing in schoolyards while growing up in Brooklyn. His family moved to North Babylon in the 1950s, and his life changed for the better, he said, when he met North Babylon High School coach Brendan McCann, who helped him hone his skills and taught him life lessons he carries with him to this day. McCann, now 86, was drafted by the Knicks in 1957, went on to play three seasons in the NBA and was inducted into the Suffolk Sports Hall of Fame in 1999. Pellicane ended up returning to North Babylon as the boys’ coach, and followed in McCann’s footsteps by becoming a history teacher as well as the director of guidance.

Pellicane has passed those values on to his players over the years. “He cares so much about his players, as if they’re like his own children,” Gibson said. “A lot of coaches are like that, but he just has that different mentality, the emotions that he really makes you feel like you’re his own child. He always had that calm mentality. When things were rough, he still remained calm and was always positive.”

Gibson played for Molloy from 2016 until the pandemic-shortened 2020 season. She has since become a teacher’s assistant at William S. Culvert Elementary School in Rockville Centre, and is pursuing a master’s degree in education at Molloy. She said she still maintains a close relationship with her former coach.

Christine Verrelle said that Pellicane helped shape her in many ways, and always preached strong defense to his players. Verrelle played for Dowling from 2011 to 2015, and was a member of the team that went to the national championship game. She has been an assistant coach at Molloy, alongside Pellicane, since 2019. She said she wasn’t surprised that he earned the Hall of Fame honor, and noted that she fondly looks back on Dowling’s run to the national finals.

“It was amazing,” Verrelle said. “I will never forget it, and I don’t think any of us will. Nobody knew who we were. We were this small D-2 school from Long Island — nobody thought we were going to win a game, but he knew. I think Coach P always knew.”

Ihnacinse Grady played for Pellicane at Molloy from 2015 to 2019, and then became an assistant coach. She said he is deserving of the Hall of Fame, and praised him for always being there for his players.

“He used to always tell me, you’re in or you’re out,” Grady recounted. “He basically meant that with basketball, you have to put in effort. You have to work hard every day, no matter the challenges or obstacles you may face. Basketball is a marathon, it’s a long season, so things aren’t always going to be great, but if you dedicate yourself every day and work hard, you’re going to be a winner.”

Pellicane credited his wife, Linda, and his three children — Keith, a math teacher in the Jericho School District, Andrea, a guidance counselor at Pelham High, and Lauren, a guidance counselor and girls’ basketball coach at Haverford High in Pennsylvania — for his success, and praised them for being patient, because coaching has taken up so much of his time over the last 42 years.

Of his players, he added, “The relationships are so special. It’s not like the winning basket. Now, don’t get me wrong, those are special times; those are fun times. You’re never going to forget those, but what makes those special are the young people and the relationships.”