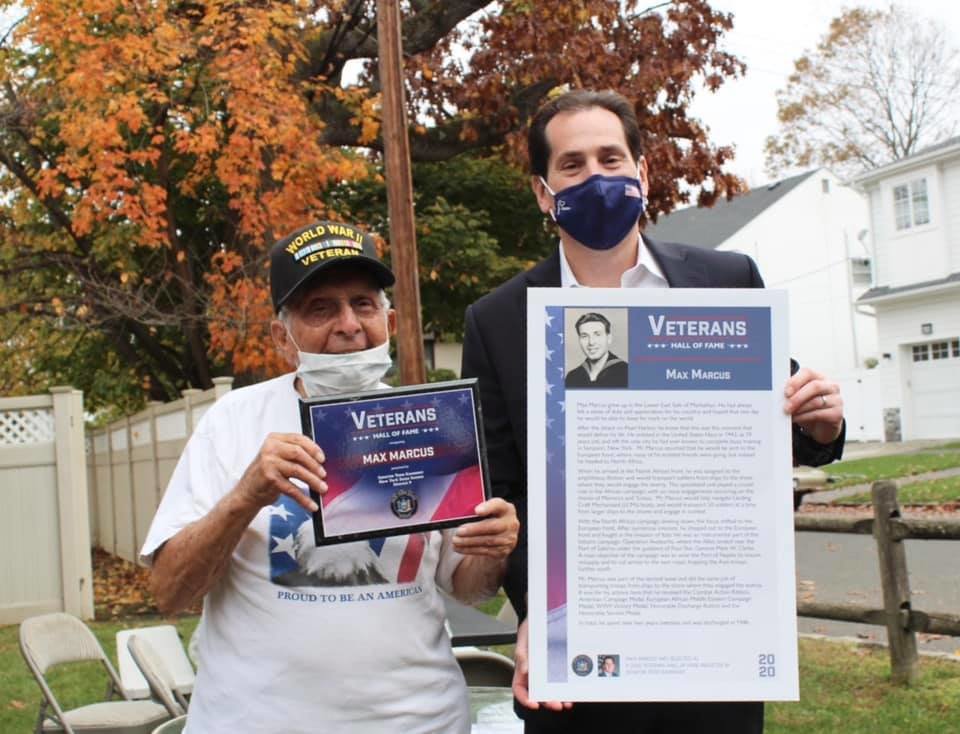 On Veterans Day, Woodmere resident Max Marcus, who served in the Navy as a petty officer, third class, was inducted into the New York State Senate Veterans’ Hall of Fame by State Sen. Todd Kaminsky, a Democrat who represents the Five Towns.

Marcus grew up on the Lower East Side of Manhattan and said he always felt a sense of duty and appreciation for his country, and hoped that one day he would be able to leave his mark on the world.

As World War II was raging across the globe, he enlisted in 1943, at 19, and took part in basic training in upstate Sampson. From there he headed to North Africa and was assigned to the amphibious division that transported soldiers from ships to the shore to battle the enemy.

The specialized unit played a vital role in the African campaign. Much of the combat happened on the shores of Morocco and Tunisia. Marcus helped navigate landing craft mechanized boats with 50 soldiers at a time.

After fighting declined in North Africa, Marcus was transferred to the European campaign and fought in the invasion of Italy. He was an instrumental part of the historic campaign, Operation Avalanche, where the allies landed near the port of Salerno under the guidance of four-star General Mark W. Clarke. A main objective of the campaign was to seize the port of Naples to ensure resupply, and to cut across to the east coast, to trap the Axis troops further south.

Part of the second wave, Marcus replicated his job of transporting troops from ship to shore. His military actions earned him the Combat Action Ribbon, the American Campaign, European African Middle Eastern Campaign, WWII Victory an Honorable Service medals, along with  an honorable discharge button. After more than two years overseas he was discharged in 1946.

Kaminsky recognized Marcus for his service in a socially-distant private ceremony at the Marcus home in the presence of immediate family.

“On this Veterans Day, I’m especially thankful to have the opportunity to honor Petty Officer Max Marcus for his brave service during the Second World War,” Kaminsky said in a statement.  “We all owe Max our gratitude for his service to our country, along with his commitment to freedom and family, which is why I’m proud to have nominated him as our district’s inductee to the New York State Veterans Hall of Fame. I hope this recognition brings him and his family pride for generations to come.”

The State Senate’s Veterans’ Hall of Fame was created to honor and recognize outstanding veterans from the New York who distinguished themselves both in military and civilian life. It is a chance for the Senate to honor the heroic New Yorkers, to whom a tremendous debt of gratitude is owed.