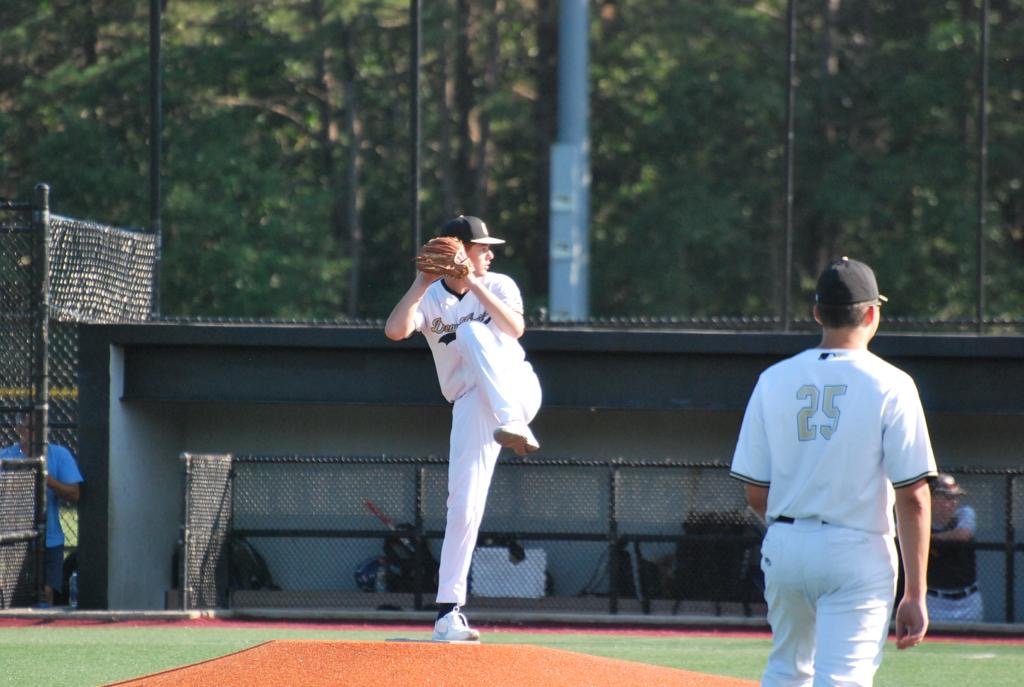 Woodmere resident Jacob Steinmetz was drafted in the third round of the 2021 First-Year Player Draft on July 12. Above, pitching at the Elev8 Academy in Delray Beach, Fla., this past spring.
Jacob Steinmetz/social media
By Jeff Bessen

If Woodmere resident Jacob Steinmetz, who was drafted 77th by the Arizona Diamondbacks in the third round of the 2021 First-Year Player Draft on July 12, was writing his own story, he said he would not shy away from the obvious story lead.

“It was what I was working toward and if it was going to happen, I knew it was going to be a thing,” Steinmetz said on being the first Orthodox Jew drafted by professional baseball (the Nationasl drafted Elie Kligman on July 13). “To me, all my hard work paid off and it’s a great feeling when you put the work into something and you succeed.” The success he credits to his parents and all his coaches along the way.

His father, Elliot is coach of the Yeshiva University men’s basketball team. He has guided them to a 36-1 record and national rankings the past two seasons, and the Division III Sweet 16 in 2020 before all sports was shut down because of the coronavirus pandemic.

When college and major league baseball scouts watched the 6-5, 220-pound Steinmetz pitch they saw a young man not yet 18 whipping a fastball toward home plate at upwards of 96 mph and dropping a curve that has a snap.

That talent has brought the Hebrew Academy of the Five Towns and Rockaway High School graduate to playing professional baseball. The draft  was conducted this year in conjunction with major league baseball’s All-Star festivities.

Steinmetz, who initially committed to play baseball for Fordham University at the NCAA Division I level, honed his skills at the Elev8 Academy in Delray Beach, Fla., this past spring. Now, the young man who turns 18 on July 19, will head to Arizona to sign a pro contract and begin what baseball oriented movie called “life’s first profession.”

In 2012, when Jacob was 9, The Jewish Star newspaper wrote an article on the Orthodox Jewish boy, who not only was a budding superstar, but a person that Karen Green who wrote the article showed, “determination and was goal oriented without compromising his principles,” who also possessed “adaptability, while adhering to his priorities.”

Steinmetz remembered the story and said he was looking at it as he spoke to a Herald reporter. Saying that his younger self “wasn’t even thinking about it,” meaning playing professional baseball, “that it was just a dream,” Steinmetz feels like he is the same person just older.

Richard Kahn, the current treasurer of the Hewlett-Woodmere Little League, coached Steinmetz at the lower levels of the youth league and remembers him as coachable. “He was always a good ballplayer, always smart, knew what to do and was a team leader,” said

Kahn, who had an earlier glimpse of what a future major league ballplayer looked like as Pete Falcone, who pitched for the Giants, Cardinals, Mets and Braves, was on Kahn’s Little League team in 1963. “He was very conscientious and definitely a pleasure to coach,” Kahn said about Steinmetz.

When Steinmetz played on the Long Island Chargers as a youngster and the Long Island Titans as a teenager, the teams accommodated Steinmetz’s religious obligations where games, except for tournaments, were not scheduled on Shabbos.

Such accommodations are harder to come by in pro ball, but Steinmetz said that will be “something between me and the team. “I’ll keep doing what I do, walking to games on those days.”

He describes the pre- and post-draft time as “crazy” and “overwhelmingly.” “I’m definitely exited to have gone through it,” Steinmetz said, adding that he looks forward to beginning this phase of his life.