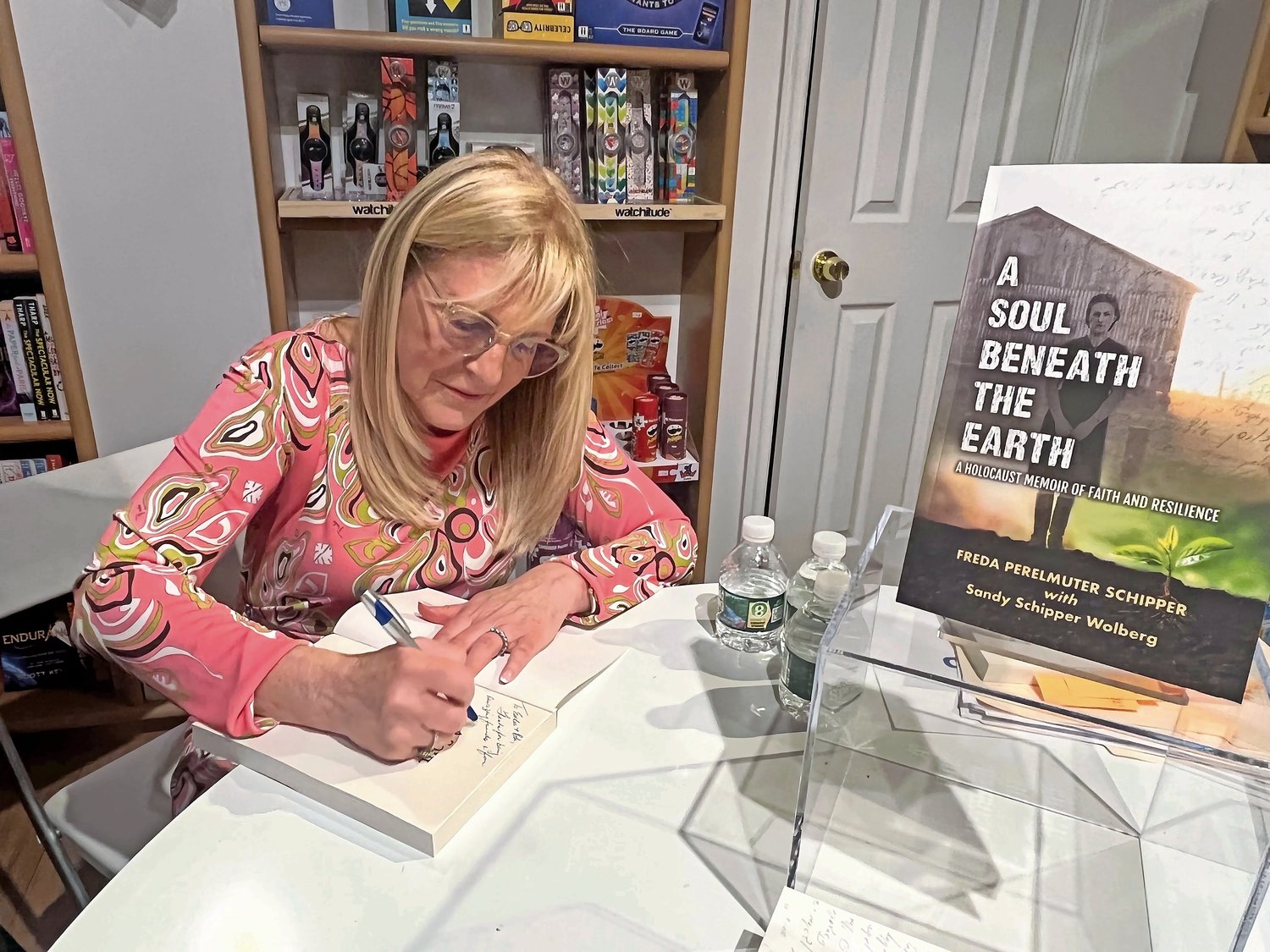 After eight years of writing and revising, Woodsburgh resident Sandy Wolberg completed “A Soul Beneath the Earth: A Holocaust Memoir of Faith and Resilience” in June.
Lisa Margaria/Herald
By Lisa Margaria

In keeping with her mother’s philosophy of informing the world, longtime Woodsburgh resident Sandy Schipper Wolberg published a book about her mother’s experience surviving the Holocaust, “A Soul Beneath the Earth: A Holocaust Memoir of Faith and Resilience,” in June.

Roughly 50 neighbors and friends crowded into Blue Door Books in Cedarhurst for Wolberg’s book launch on June 22. Her husband, George, described it as a “milestone” and a “great accomplishment,” adding, “It was a labor of love for her.”

“It was her mission to teach the world and tell the world what really happened,” Wolberg added. “So, my whole life, I heard all the horror stories. And I always asked her to write it down. To write a book. And she always demurred, saying, you know, I don’t want to bother you.”

Freda was 91 when she was diagnosed with pancreatic cancer in 2013. That was when mother and daughter decided to get to work. “So, as typical of a strong-willed Holocaust survivor, she dictated the terms of the arrangement of our writing,” Wolberg recalled. “So what she did was, she called us every night from 10 p.m. to 1 a.m. She said that she’s going to talk and I am going to type.”

For three months, Schipper spent her days preparing notes to share with her daughter at night, and then called her in New York from Montreal. “I don’t even know how she did it, because she was really sick,” Wolberg said.

Each day after the nightly call, Schipper would make Wolberg read back what she had written. “She had to approve it,” Wolberg said. “She knew that she wouldn’t be around to edit the manuscript.” So, eight years ago, “That’s how the book came to be,” Wolberg said.

After Schipper died in 2014, “It took me a long time to really put (the book) together,” Wolberg said. “It was a hard thing to do — and a hard thing to let go once it was finished.” She added that her mother left behind handwritten notes about what else to add to the story.

Because Wolberg’s son, Jeffrey, was 11 when his grandmother died, “I never took full advantage of the opportunity to sit down with her and hear her full story from start to finish,” said Jeffrey, adding, “I’m incredibly grateful to my mom for spending so much time and effort capturing my grandmother’s story.”

The book, which was self-published and is available on Amazon, was written in two parts — the first in Schipper’s voice, and the second a series of vignettes focusing on her parents, in Wolberg’s voice. There are also some poems written by Freda at the end of the book.

Freda escaped from a labor camp when she was 19, after breaking her arm in an accident. A Ukrainian farmer, Matewka Budniewski, and his wife, Katya, gave Freda refuge in their barn in Freda’s hometown of Horodlo, Poland, because of a dream Katya had about Freda’s mother. Freda’s family was close friends with the couple before the war.

“My mother’s mother came to (Katya) in her dreams and said, ‘Please save my last surviving child,’” Wolberg said. “My mother lost over 85 people from her immediate and extended family.”

Matewka dug a pit under his barn, where Freda hid, and she was grateful for the couple’s generosity. Though she had nothing to give them in return for saving her, she prayed that the couple, who had been childless for 10 years, would conceive.

Four months after they took her in, when Freda was worried that they would ask her to find a new hiding place, Katya became pregnant. The couple believed it was a miracle — an answer to Freda’s prayers. She stayed under the barn for 21 months, “never walking, never talking and never standing. She was just lying there,” in the pit, Wolberg said. “That’s how she survived the war.”

Finally launching the book in the Five Towns, Wolberg’s home for roughly 22 years, is “an unbelievable experience,” she said.

“The support and the love that I have gotten from the community is off the charts. It’s really amazing.” She added that it is “an honor and a privilege” to continue her mother’s “mission of telling the world what happened.”