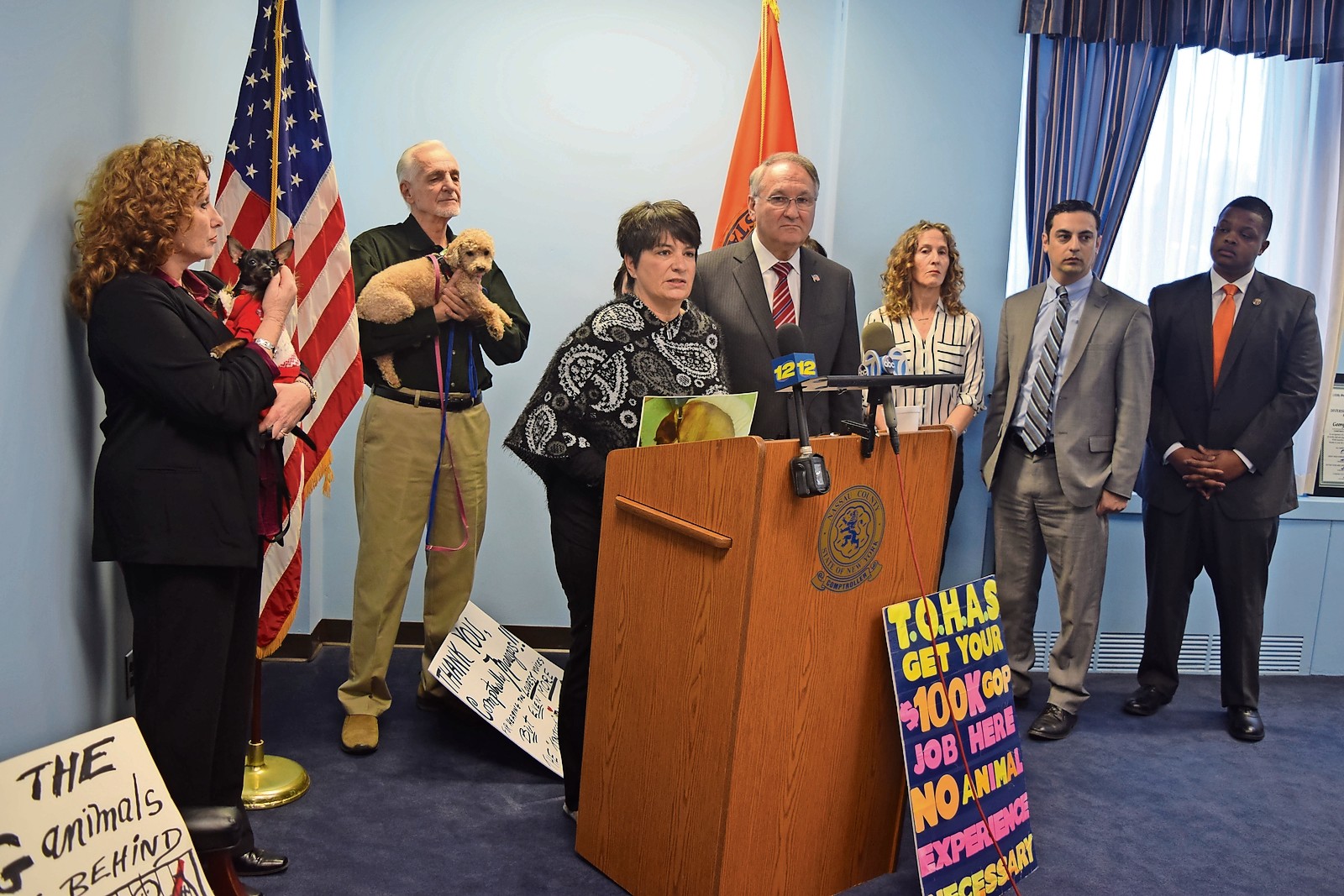 We are certainly very concerned about the care and well-being of the animals.”
George Maragos County comptroller
By Rebecca Anderson

Maragos, who is running for county executive, opened the audit on Jan. 31. He announced the investigation of the shelter’s finances and operations alongside animal rights activists, who have also filed lawsuits against the town.

Maragos said he received complaints from town residents as well as animal-rights groups about the shelter, ranging from concerns about animal neglect to unnecessary deaths, unsanitary conditions and unqualified staff.

“The alarming allegations brought to the attention of the comptroller’s office demanded immediate response to ensure that any animal neglect is prevented,” he said. “We hope that the Town of Hempstead will take all steps necessary to provide adequate animal care without delay to the satisfaction of local animal-rights groups.”

The audit was ordered after two lawsuits — citing political abuse, corruption, nepotism and cronyism — were filed against the Town of Hempstead on Dec. 12 on behalf of shelter employees Nancy Giris, Dolores Stormo and Wendy Cariello, as well as animal advocate Diane Madden. Town of Hempstead, Supervisor Anthony Santino, Animal Shelter Director Michael Pastore, former supervisor Kate Murray and others were named in the suits.

“These are First Amendment retaliation lawsuits,” lawyer Jonathan Tand explained. “There has been rampant corruption in the town and the mistreatment of the animals at the shelter.”

Tand said that employees’ issues began when Pastore was hired to take over operations more than two years ago. “The animals are being used as weapons for political retaliation,” Tand added.

The shelter is funded with taxpayer dollars — $3 million of which goes toward party payroll, Madden said. She said that members of the group Hope for Hempstead Shelter have been “alarmed for some time by the inhumane conditions and lack of care at the Town of Hempstead Animal Shelter due to mismanagement, lack of funding and unqualified staff.

“All of our efforts to reach out to the town to help the neglected animals in their care have been refuted,” Madden continued. “We thank the comptroller, George Maragos, for sharing our pain and immediately commencing the audit in order to bring to light the deplorable conditions at the Town of Hempstead shelter with the hope that the animals will be adequately cared for.”

Giris, an adoption coordinator, said she became increasingly marginalized as time went on and was taken off public media events.

“It was a way to keep things quiet,” she said. “When Mike Pastore took over, he and I couldn’t come to terms, and he took a very systematic approach. ‘This isn’t an adoption center,’ he would say, ‘this is a shelter. Out the door means out the door.’”

Giris explained that “out the door” refers to transferring the animals to another shelter or possibly euthanizing them.

Santino said that the audit was a political maneuver, adding that Maragos is “trying to inject life into his failing campaign for county executive by playing politics with the town’s animal shelter.” In September, Maragos switched his registration from Republican to Democrat and announced that he would seek the party’s nomination for county executive, but Democratic Committee Chairman Jay Jacobs announced last month that the committee would back County Legislator Laura Curran.

“He conveniently ignores the fact that a New York state audit has just awarded the town’s shelter its highest rating, while the shelter maintains one of the lowest euthanasia rates of any shelter on Long Island,” Santino said of Maragos. “However, it is not surprising that Mr. Maragos, who famously equated the issue of gay marriage with marrying your pet, now considers himself an expert on the operations of a municipal animal shelter.”

According to Newsday, Maragos said that he viewed marriage as something between a man and a woman — and “some people would even like to marry with their pets” — in a 2011 interview with Island Now news. However, Maragos said he misspoke at the time.

“I have since apologized publicly and I did not mean to demean anyone in the gay community,” he said. “I have accepted that gay marriage is the law of the land. I have evolved.”

Maragos also said that Santino’s comments about a state audit are incorrect. The most recent audit of the shelter was conducted in 2012, Maragos said, and State Comptroller Thomas DiNapoli found “a lack of proper financial oversight, excessive expenses and general poor management.”

In a Jan. 23 news release, town officials said that the shelter was inspected by the state Department of Agriculture and Markets Division of Animal Industry, which described the facility as safe, clean, well-lit, well-ventilated and having adequate space available. The shelter was graded “satisfactory,” which officials said is the highest rating given.

However, Maragos described the report as a questionnaire with 19 line items that address basic minimal standards related to a shelter’s operation. Each is judged met or not met by an entry of “yes” or “no” on the corresponding line, he said.

“It is disingenuous for them to attempt to mislead the press and the public,” Maragos added. “We are certainly very concerned about the care and well-being of the animals.”

The audit will continue for two to three months. After inspections, an official report will be released.

Julie Mansmann contributed to this story.