Remembering the Valley Streamers who fought in D-Day 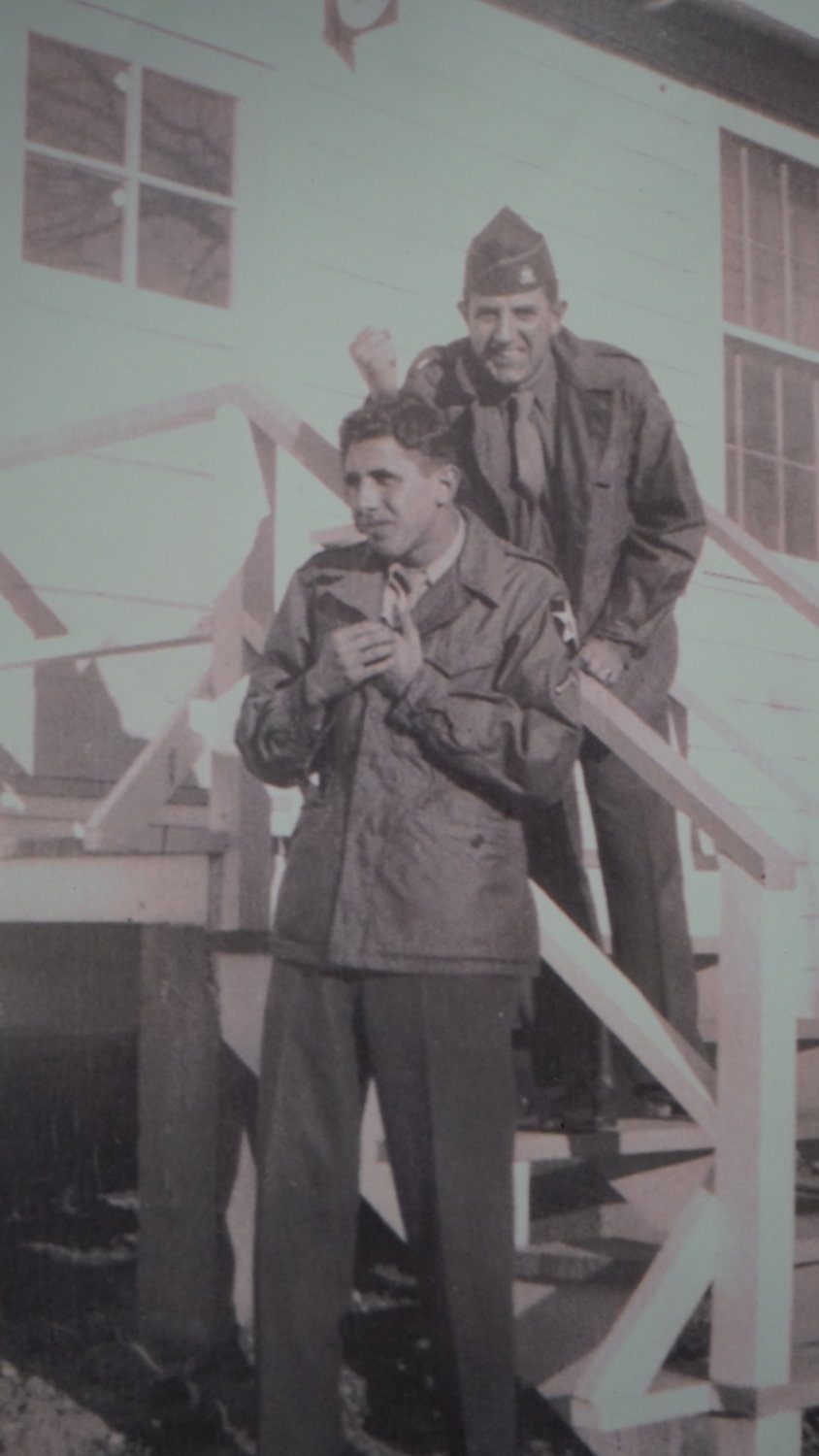 Valley Streamer Louis Palermo, left, in 1945. He was one of two from Valley Stream known to have directly taken part in the D-Day invasion.
Courtesy Louis Pelermo 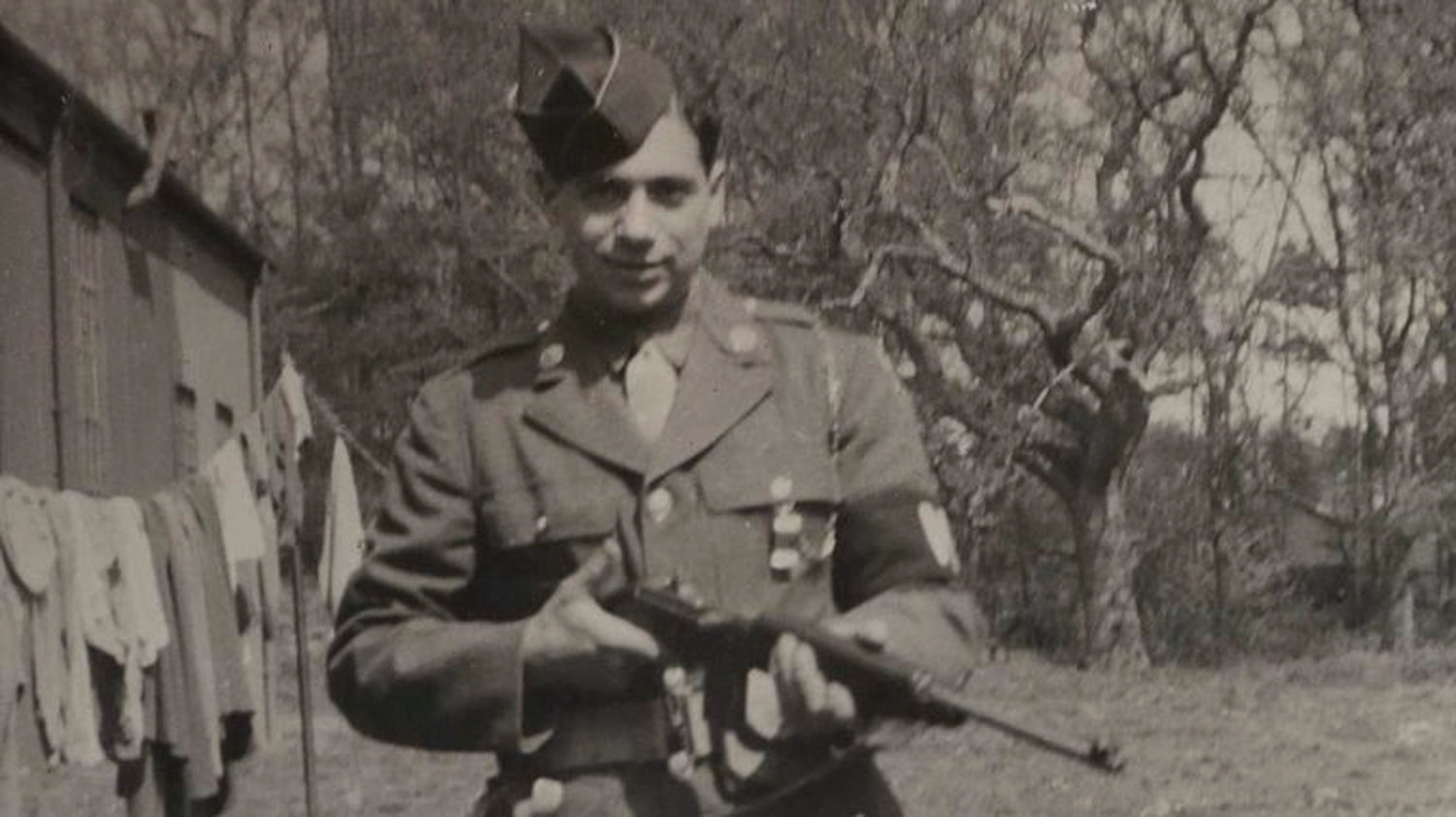 Jacob Cutler in an undated photo. He too was on the beaches of Normandy during the opening hours of the invasion to liberate France from Germany.
Courtesy Chris Critchley 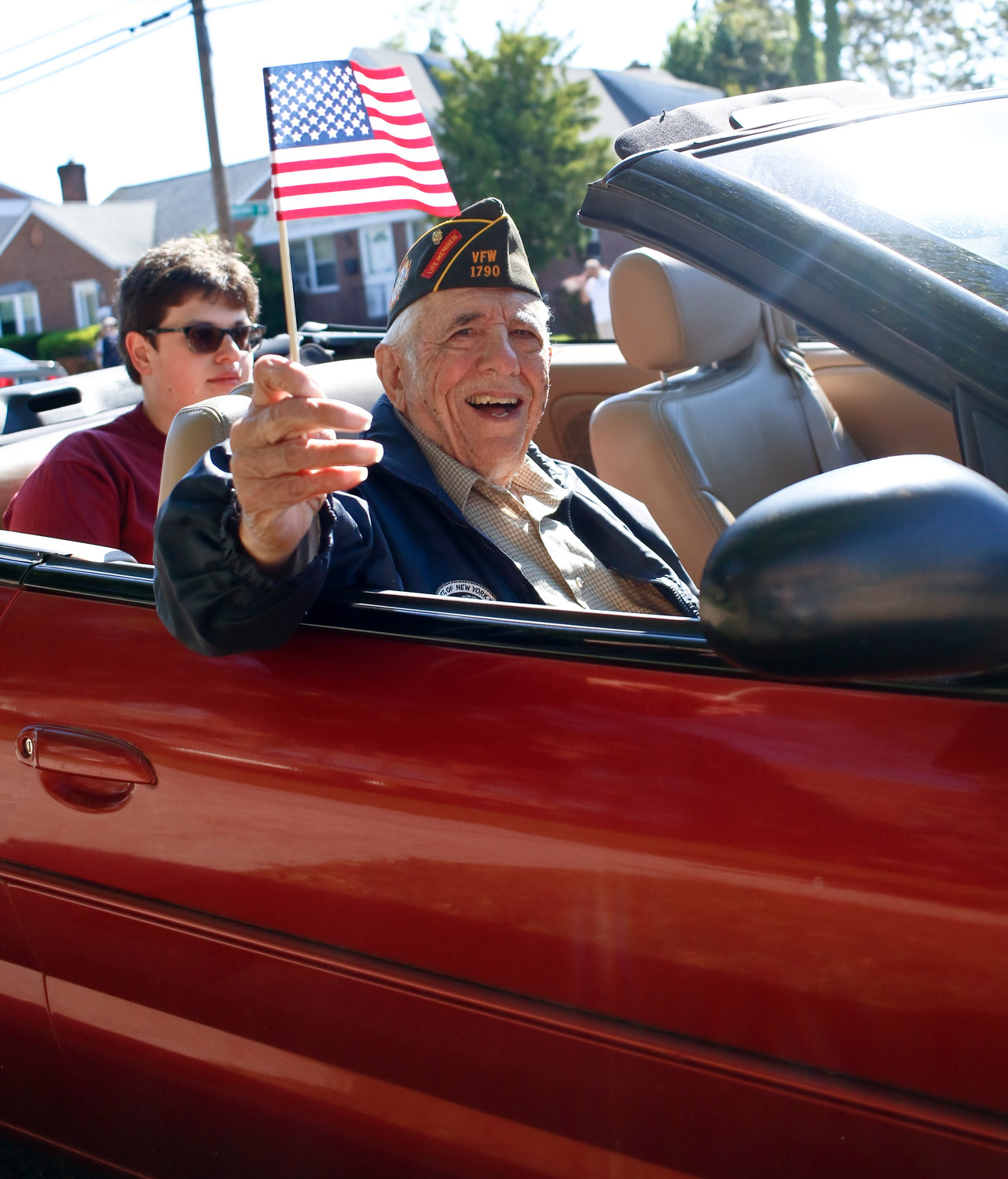 Palermo at the 2019 Memorial Day Parade. At 93, he is still active in the neighborhood.
Christina Daly/Herald 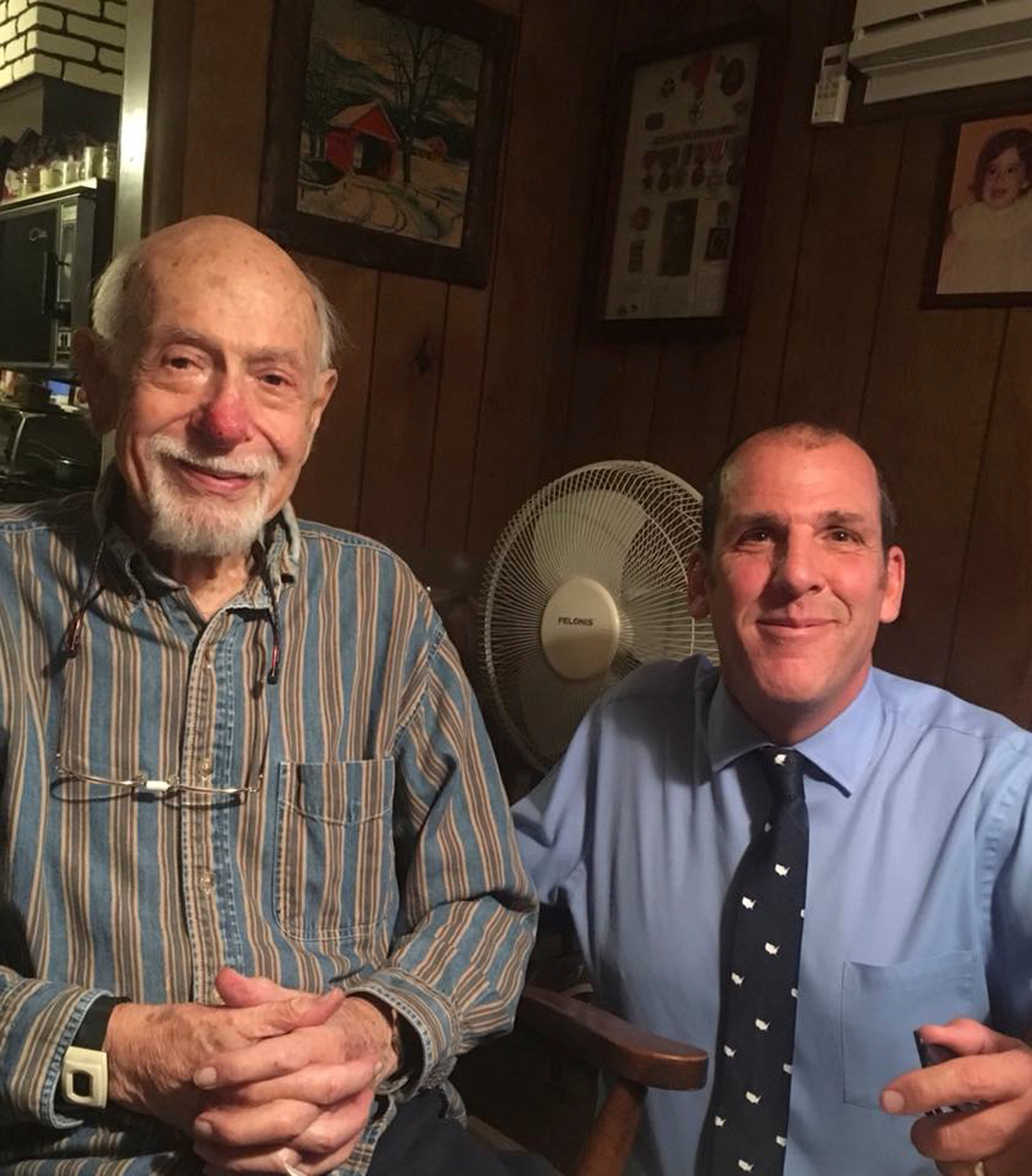 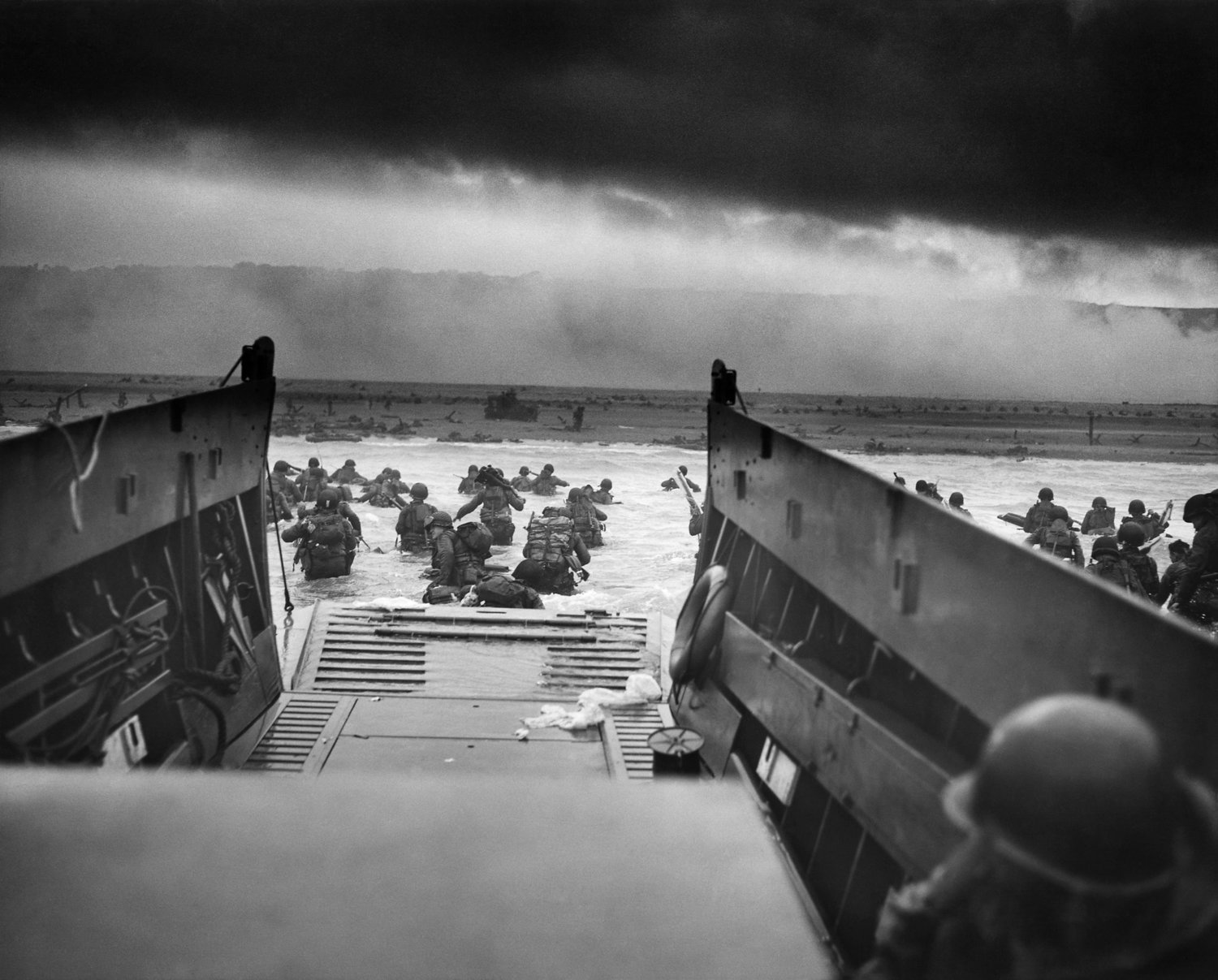 Thousands of Allied and German soldiers died in the fight to retake the western shores of France.
Robert F. Sargent/U.S. Coast Guard
Previous Next
Operation Overlord

Like the tip of an iceberg, the battle for Normandy, code-named Operation Overlord, was just one small part of one of the most complex logistical undertakings in history, with Operation Neptune being the beach-landing portion of the battle, and numerous others comprising the entire effort.

The battle was preceded by a massive deception campaign known as Operation Bodyguard intended to mislead the Germans as to the exact time and place of the Allied landing. As part of it, fake radio-traffic was generated in an effort known as Operation Fortitude, intended to make the Germans believe the Allies would land at places north and south of that actual planned landing.

Additionally, on the eve of the invasion, Royal Air Force planes dropped strips of metal foil at locations along the coast as part of operations Taxable and Glimmer, intended to fool German radar installations as to the actual positions of the Allied landing fleets.

New technologies had to be developed, such as various amphibious craft, floating docks and specially designed armored vehicles, to ensure the Allies had the capability to land its forces on the beaches.

Training for the invasion started as early as a year prior to the actual landing date, with only top-level commanders and generals knowing the time and date of the invasion due to the need for extreme secrecy.

By air and by sea, starting on June 6, 1944 — 75 years ago today — soldiers of the Allied forces hurled themselves against the heavy German fortifications along the coast of occupied Western France.
It was the largest seaborne military operation in history as more than 20,000 U.S., British and Canadian paratroopers landed shortly after midnight. Roughly six hours later, some 150,000 soldiers came ashore on the beaches of Normandy. Within six days, about 4,400 Allied and anywhere from four to 9,000 German soldiers were dead, as Allied forces secured the beaches and began pushing inland. Dubbed D-Day, the battle was considered the beginning of the end for Germany in World War II.
“I’ll tell ya, we lost a lot of lives there,” said Louis Palermo, 93, one of two Valley Streamers known to have fought in the D-Day invasion, and the only one still living. “ … You can’t count them, how many we lost.”
The other direct participant from Valley Stream was Jacob Cutler, along with a number of others who came ashore in the days after or took part indirectly, according to Chris Critchley, an amateur historian and a 25-year social studies teacher at Central High School.
“This was the largest battle in the history of the world,” he said. “There was never such a formidable defense. The Atlantic Wall that the Germans had put together was as good as the cars they built.”


Using forced French labor, the Germans had fortified about 2,000 miles of coast stretching from Spain to Scandinavia, with hundreds of machine guns and artillery emplacements ensconced in thick concrete bunkers and a maze of trenches. The defenses were believed to be impregnable.
“It was such an effort to defeat the enemy, and an insane sacrifice,” Critchley said of the invasion, which opened up a front on Germany’s western flank as the Soviet Red Army began regaining ground in the east. “…These were men from our village, representing our home, and escaped with their lives, but unfortunately saw many of their comrades fall.”

‘The Germans were throwing everything at us’
Palermo was 18 and was assigned as a private first class infantryman to land at the beach the invasion planners had dubbed “Omaha,” one of the five landing sites in the battle, and the one that saw the most casualties.
“The Germans were throwing everything at us,” he recounted in a previous Herald story published on the 72nd anniversary of the battle. After the door of his Higgins amphibious landing boat dropped, he plunged into the sea.
As part of one of the first waves to hit the beach at dawn, he needed 10 minutes to reach the shoreline as some of the soldiers around him drowned under the weight of their gear, and as German machine gun and artillery fire rained down on him and his comrades. Once on the sand, he had little choice but to lay flat for an hour, praying a bullet wouldn’t hit him, until he heard the order to move up.
More waves of troops landed, and Allied naval artillery had softened the German fortifications somewhat. Small groups of riflemen and Army Rangers penetrated the bunkers above the beach, and by the time Omaha was under Allied control, 2,500 solders were dead and 1,000 more wounded.
Palermo followed the Allied forces inland as they pushed from France toward Berlin, linking up with the surviving paratroopers that had landed the previous night. They then lived in foxholes and participated in a number of battles.
Six months after Normandy, he took part in the Battle of the Bulge, in which Germany mounted a desperate, failed counter-offensive in the French Ardennes Forest.
It was there that he caught a piece of shrapnel near his shoulder blade from an artillery shell. Army medics patched him up and sent him back to his post. “We lost a lot of good men there, too,” he said of the pivotal battle, which he described as nearly as bloody as his experience at Omaha.
He had another close call in Germany, when a friend standing nearby was shot in the head by a sniper. Palermo took cover to evade the sniper’s reach.
Another mishap occurred when he was separated from his unit for a week in the Army’s rush to beat the Soviets to Berlin. His mother was notified that he had gone missing, but after linking back up, he sent another letter telling her that he was OK.
Palermo still lives in Valley Stream with his wife of 61 years, Norma, and as recently as last week, could be seen participating in the Memorial Day parade. He and Norma had two children together, John and Joan, and now four grandchildren.
“If anyone survived, they were lucky,” he said of the fateful day. “I was lucky.”

‘Bodies and bodies all over the place’
Jacob Cutler was a 19-year-old private first class in the Army military police when he was assigned to Omaha, and recounted his experience and the bloodshed to news outlets in 2015 and in a taped interview in 2002.
“The beach was a horrible mess,” he said of the shattered landscape. “Bodies and bodies all over the place.”
Cutler was originally supposed to land on Omaha at D-Day H+3, 9 a.m., or three hours into the landing operations, but like many of the plans that day, he said, “It didn’t work that way.”
As a military policeman, he was supposed to guide straggling soldiers to their units after the confusion of the landing. Instead, because of rough waters and a leak that sprung in his Higgins boat, he was late by about four hours, and was spared the worst of the fighting.
Still, because of bad weather and various obstacles, including mines and fire from machine guns and the deadly German flak 88 anti-aircraft cannon, instead of disembarking in knee-high water, as he was told would happen, he was dropped, while wearing 60 pounds of gear, in waters that went up to his chest. Fortunately, he said, no members of his unit drowned.
Once on the sand, “we raced across that beach,” Cutler said, zigzagging across the bodies and scrambling to reach the cliffs near the shoreline, pushed up against the rock wall that would provide cover, as he looked out across the carnage.
“Easy Red Sector,” he said of his location. It was the code name for the most vital and heavily contested stretch of Omaha, and where the bluffs leading inland were located.
Cutler watched as a handful of destroyers and the battleship Texas exchanged artillery fire with the German fortifications, and as the 88s pummeled the landing craft and tanks that tried to make it ashore.
By the time he had reached the bluff leading inland where he had been assigned, the Germans had already been pushed a few miles inland.
“We didn’t have any dry clothes, so we just stayed wet,” Cutler recalled of that afternoon.
He, too, would later take part in the Battle of the Bulge, encountering a lone German paratrooper in the Belgian forest, whom he helped capture. The soldier, clad in white snow camouflage, it turned out, was an advance scout, and a prelude to the mechanized assault that would come an hour later.
Cutler survived the war uninjured, and, originally from Brooklyn, moved to Valley Stream in 1972 with his wife, Charlotte, whom he met shortly after the war. He died in 2018 at age 95.
Chronicling stories for posterity such as Palermo’s and Cutler’s is of utmost importance, according to Critchley, or else they might be lost to time. Quoting a line from the poet Thomas Campbell, he said, “To live in hearts we leave behind is not to die.”
Report an inappropriate comment