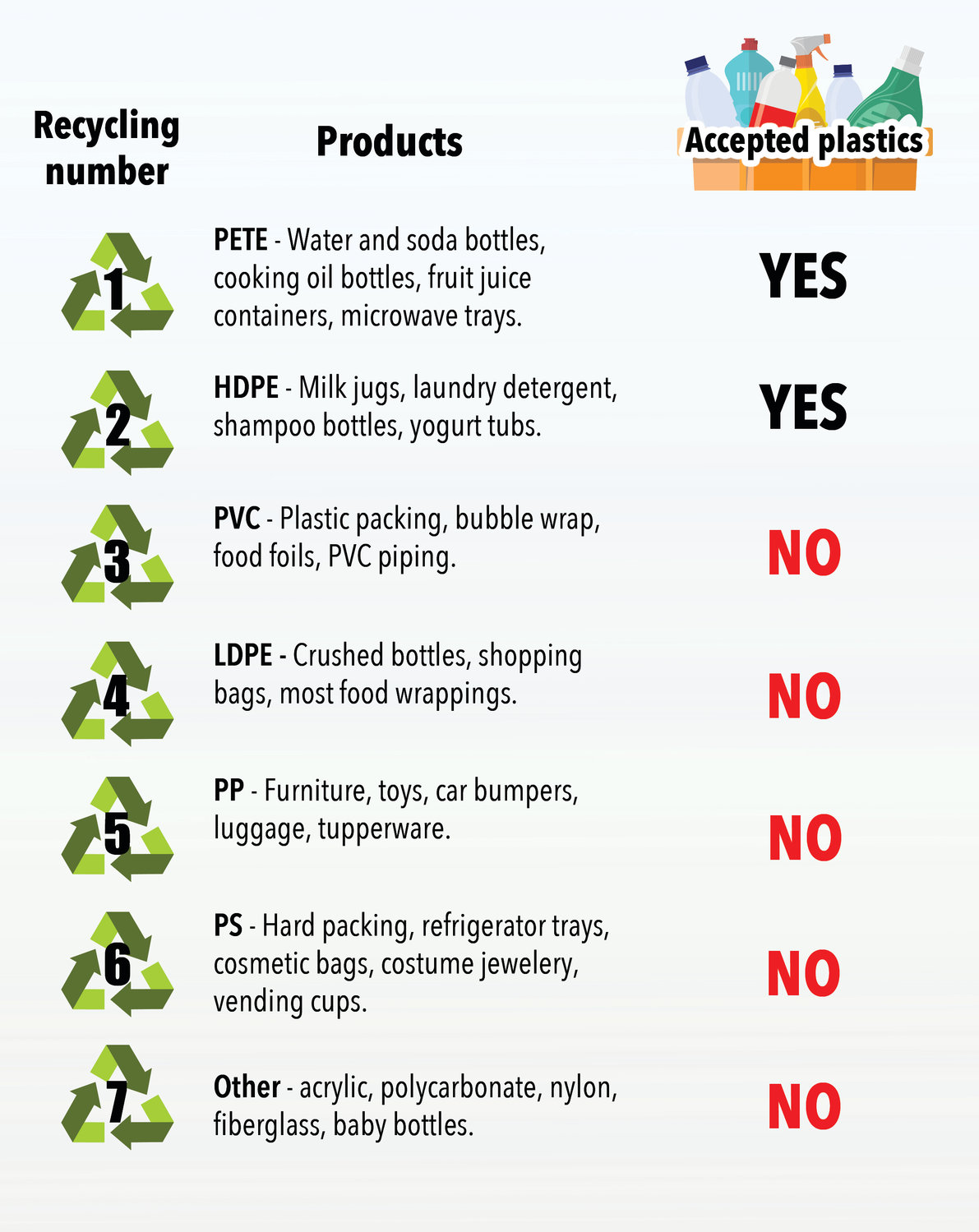 The village is collecting No. 1 and No. 2

plastics along with glass bottles

The village is collecting uncoated paper

The do’s and don’ts of recycling in Valley Stream

•Make sure recyclables are clean and dry.

•Make sure that cardboard and paper items are tied up using twine.

•Recycle plastic containers marked No. 1 and No. 2.

•Leave cardboard outside in rainy weather for more than a day.

•Recycle appliances such as microwaves or toasters.

•Recycle waxed cardboard such as paper cups or cereal boxes.

•Recycle coated paper or cardboard such as pizza boxes.

•Recycle containers of toxic liquids such as herbicides and pesticides, even if empty. Instead, use the Town of Hempstead’s Stop Throwing Out Pollutants, or STOP program.

Valley Streamers last week took to social media and inundated the village Sanitation Department  with complaints after what they say was a botched rollout of the village’s newly implemented dual-stream recycling schedule.

The most common criticism was of the lack of notification of the changes after the Jan. 10 completion of the first cycle under the new system, which alternates the pickup of glass, plastic and metal recyclables one week, and paper and cardboard the next.

“It really didn’t help that today was windy,” one resident, Christopher DeVoe, wrote in a post on Jan. 8. “I really feel that the village didn’t educate us enough on the recycling . . . There is going to be a learning curve to this. The majority of people on my block put out paper yesterday.”

His was among more than 100 comments on various community pages voicing similar sentiments. The week of Jan. 6 was intended for plastic, glass and metal recyclables. In cases where residents had put out the wrong items for that week, sanitation workers were advised to leave them on the curb, according to village officials, resulting in situations in which cardboard was left out and strewn across the street by the wind while residents were at work.

In addition to complaints on-line, there were also reports that someone called the Sanitation Department and threatened to harm sanitation workers.

Department Supervisor Brian Leavey said he had seen a sharp increase in complaints last week, with the majority saying that they were unaware of changes to their recycling schedule. Additionally, he confirmed that a threat was made against sanitation workers, and that police had been notified.

“Nobody likes change,” Leavey said. “So the complaints we’ve been getting, it’s mostly that they didn’t get any notice.”

He said his workers would soon be placing stickers on items that are no longer recyclable under the new system with details about how to contact the village for information on why they were left behind.

In attempts to notify residents of the changes, on Dec. 10, Leavey and village deputy treasurer and waste transfer station coordinator, David Sabatino, held a presentation explaining the reasoning behind the switch to dual-stream, and details of the new system were mailed to every home in the village in its quarterly newsletter, as well as on the village website and Facebook page. Additionally on Friday a robocall went out to residents in the neighborhood, and more robocalls, mailers and presentations are planned for the future.

The Herald also published details on the new schedule on the front page of its Dec. 21 edition.

“Changes to procedures can be challenging at times,” Mayor Ed Fare said in the automated message, “but by working together we can ensure a better outcome for all. Rest assured that your recyclables will continue to be picked up every week on the new rotating basis.”

During Leavey and Sabatino’s hour-long presentation, the two said that changes in domestic market conditions for recyclables, the proliferation of delivery services that use cardboard boxes such as Amazon and the threat of cross-contamination between different types of recyclables had necessitated an overhaul of the village’s recycling program or risk potentially increasing the amount the village spends on recycling threefold.

Over the past 30-plus years as recycling in the United States took off, Sabatino explained, other countries, primarily China, served as the chief importer of America’s recyclable materials, cheaply accepting plastics, glass and paper with what he said had “a level of contamination that most developed countries would not accept.”

As much as 70 percent of the world’s plastic waste went to the country, according to reports by major news outlets. But all of that changed in 2017, when as part of an anti-pollution effort, China announced it was cutting back on importing the world’s garbage. By January 2018, it had banned the import of certain plastics and paper altogether.

The contamination Sabatino and Leavey spoke of is not limited to grease and dirt left on food containers, they said, but more problematically, chemicals and materials that make certain items more difficult to recycle than others.

Paper drink cartons, Sabatino said, for example, despite often displaying symbols indicating that they are recyclable, are coated with wax that interferes with the process in which the paper is broken down for reuse. Recycling programs in the past would accept such containers, he said, but currently Valley Stream is no longer taking them.

“Our recycling hauler does not have the technology to handle things like this right now,” Sabatino said of the Westbury-based Omni Recycling, which the village contracts with for recycling services, “and [Omni] doesn’t have destinations to bring it to here in the United States.”

The same goes for glass items such as vases and mirrors. Sabatino explained that because they are delicate and oddly shaped, they tend to break either in the recycling trucks or once they are placed in the hoppers used to sort different recyclable materials, contaminating the entire load and requiring it to be delivered to landfills.

The same is true for plastics marked 3 through 6, which contain certain chemicals introduced in their manufacturing processes that have made them difficult to break down for reuse.

It was originally hoped that such items could be recycled, Leavey said, but over time it became apparent to many recycling programs nationwide that it is difficult to do so domestically in a cost-effective manner, highlighting the limits of the market-based, for-profit recycling industry.

“This is not a perfect industry,” he said. “Recyclables are a commodity. They want to make money on this.”

Sabatino, however, expressed hope that now, with recycling firms left to fend for themselves in the U.S., they might develop the means to recycle more items as China had in the past. When that happens, he said, the village would push the firms it works with to accept such items.

“As that market develops here in the United States, we hope to put pressure on our recycler to open up the program more,” he said, “so we can recycle more and more items.”

Correction: An earlier version of this story failed to mention that recyclables placed in plastic bags will not be collected on recycling days. We apologize for the oversight.