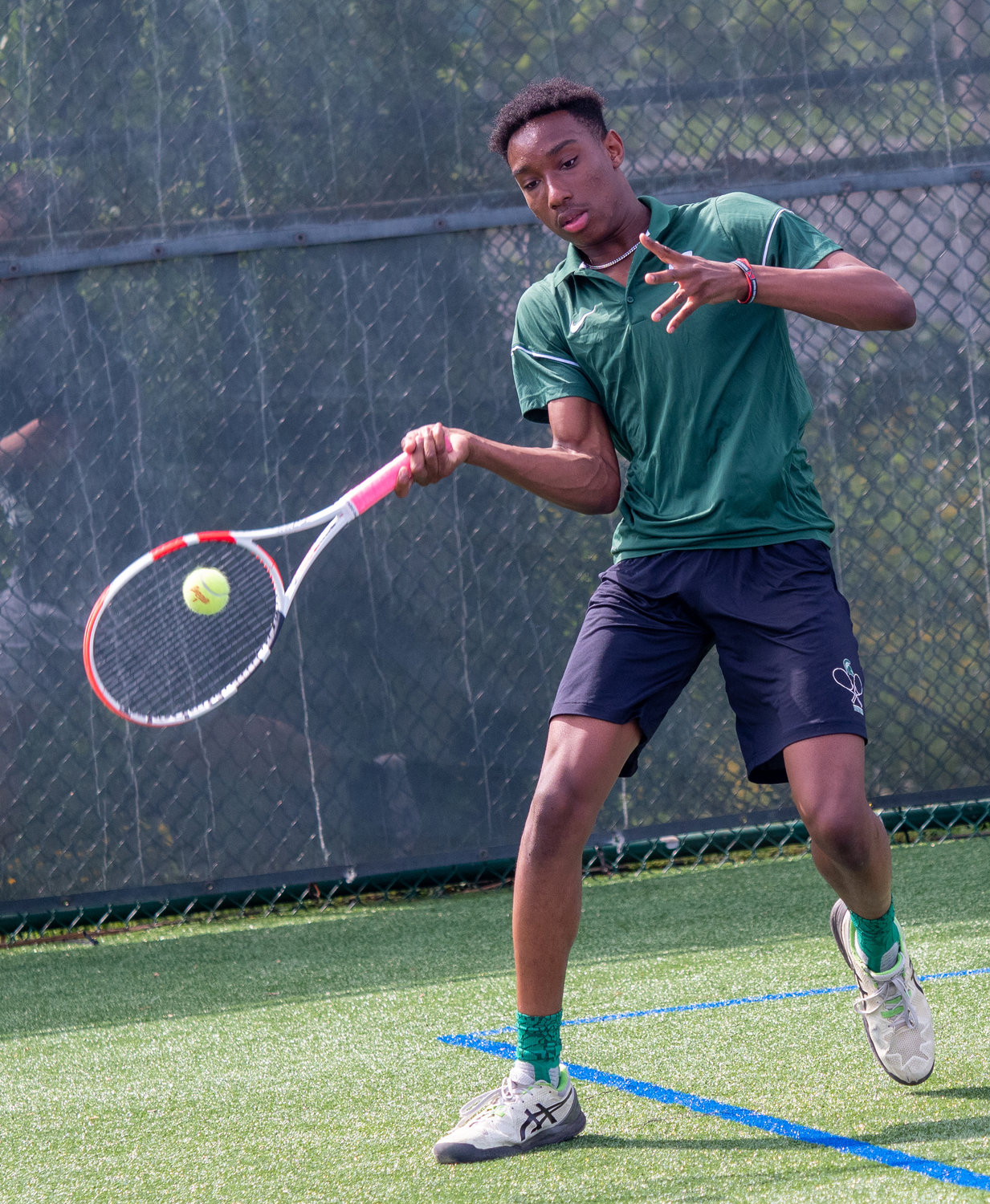 For the first time in 13 years, the Valley Stream North boys’ tennis team captured a conference championship.
Daniel Ellis, Craig Papajohn-Shaw and Everton Prospere won their respective singles matches and the second doubles team of David Feldman and Jack Schwabe continued their clutch play down the stretch with a straight sets victory to help the Spartans clinch the division with a 4-3 victory over second-place Locust Valley on May 17.
It was the program’s first conference title since 2009, when Kate Moran first took over as coach.
“The first one I think I was in shock because of a new coach coming in and winning and it was Division IV,” she said. “This year, I think the attachment to the kids, going through Covid [and] having them come back last year and playing even though Covid was still a big deal, it was just their dedication and their wanting to do so well.”
North went 13-1 during the regular season and won its last seven matches after a tough 4-3 loss at Bethpage on April 27, when they were without Papajohn-Shaw. The Spartans, unfortunately, suffered a 6-1 loss to Great Neck South in the first round of the playoffs May 19, but Moran said the defeat didn’t diminish their accomplishment.


“When you take a Division III-A team and you put them up against a third or fourth place Division I team, there’s a big gap between the ability levels,” she said. “Craig won his match, which was really big for a Division III player to defeat a Division I player.”
Prospere, a junior, used his power game to go 14-0 in the third singles slot and senior Papajohn-Shaw, went 13-0 in second singles during the regular season. Senior Ellis went 12-2 while taking on the opposition’s top singles players.
“Every once in a while, a coach gets incredible players and I happened to get three at one time,” Moran said. “When you have guaranteed wins [in] one, two and three singles, it’s just a matter of working on your doubles teams.”
The team of Feldman, a sophomore, and newcomer Schwabe, a senior track convert, was the most consistent pair during the final month of the season. They helped exact revenge on Bethpage on May 12 before helping North secure the title with a 6-4, 6-3 win against Locust Valley.
But the chemistry between the two took a while to manifest itself, according to Moran, but when it finally did, they were unstoppable.
“In the beginning, it was like two of the same magnet repelling against each other,” Moran said. “And then, all of a sudden, in the last four matches of the season, this unity happened. It was phenomenal.”
Feldman will likely compete for one of the singles spots next season along with fourth doubles players James Bello and Eli Rubang.
The first doubles team of team of senior Abdul Rao and junior Habib Rattani and the third team of seniors Kenny Pang and Ricky Chen helped the Spartans produce three 7-0 wins this year.