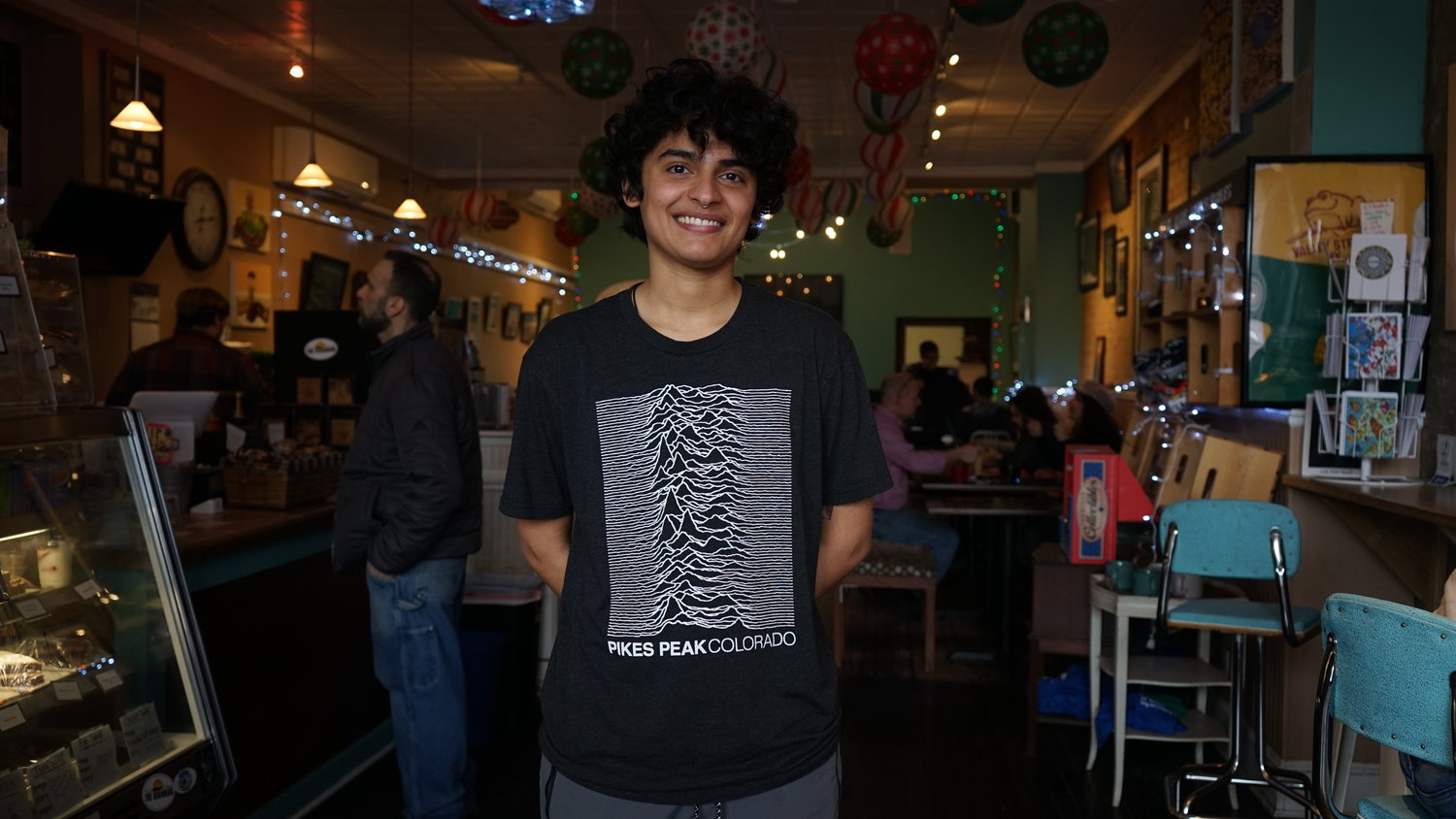 Valley Streamer and actor Sydney Diaz at Sip This, where they work. Diaz will play a role in the upcoming “Ghostbusters” sequel.
Peter Belfiore/Herald 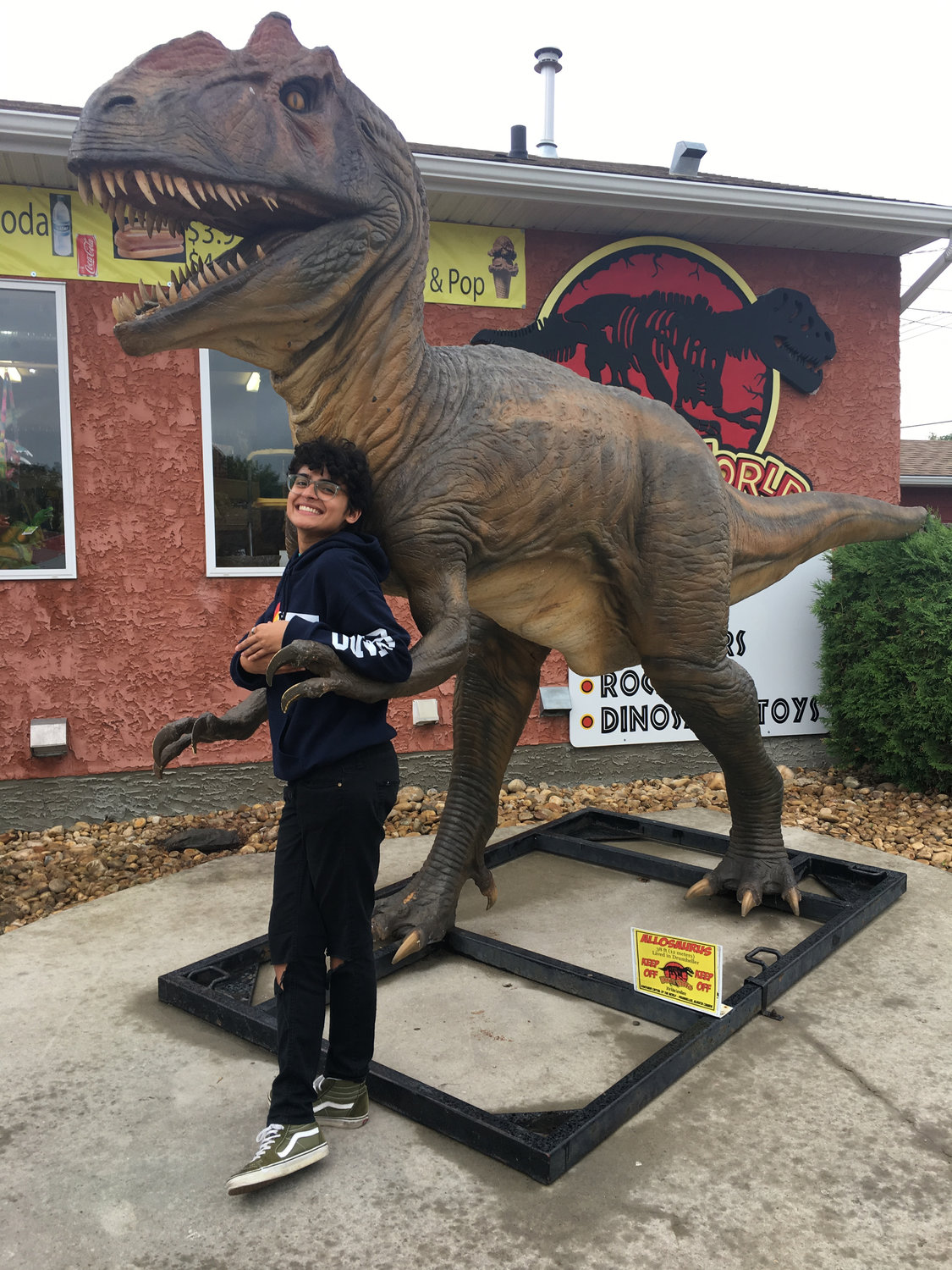 Diaz in Drumheller, Canada, where roughly half of their scenes in the upcoming film were shot. Drumheller is known as the “Dinosaur Capital of the World.”
Courtesy Sydney Diaz
By Peter Belfiore

Valley Streamer Sydney Diaz was standing in an empty fake bedroom in June, on the set of the upcoming Hulu series “High Fidelity,” when they retrieved a voicemail.

It was from the upstart actor’s talent management agency, which usually doesn’t call if the information can be put in an email.

The message had no content, except the 1983 Ray Parker Jr. tune “Ghostbusters,” the theme for the film of the same name.

Diaz, a 2013 graduate of Central High School, quickly called back and said, “Does this mean what I think it means?”

At 24, Diaz so far has four IMBD acting credits, mostly minor roles, on streaming television series, but the upcoming “Ghostbusters” sequel, scheduled to hit theaters in July, with the subtitle “Afterlife” will be the fifth, and the actor’s first film role.

Diaz prefers the pronouns they and them.

“I get very superstitious about these things,” they said of callbacks for casting. Diaz had only told their manager at Sip This on Rockaway Avenue, where they work as a barista, to clear their schedule for a few days.

There had been a sign or two throughout that day, when, while Diaz was eating  lunch with fellow “High Fidelity” cast members, including the show’s star, Zoe Kravitz, she leaned in and asked, “So ‘Ghostbusters?’”

Diaz was shocked, realizing that, as executive producer on the show, Kravitz must have anticipated that they were waiting to hear back on a casting call, which would have required changes to shooting schedules.

“Does she know something?” Diaz recalled thinking.

Then came the missed call, less than an hour later.

It had been a long process. Diaz’s agent at Shirley Grant Management had approached them with a gig in April on a production called “Rust City.” High-profile projects are typically given code names, so Diaz checked the rumor mill online to see what it could be.

When “Ghostbusters” came up, they thought, “Oh my God, this is big.”

“Cool, they liked you,” management said, so Diaz went for another self-taped line read.

Then months went by. At this point filming had started on “High Fidelity” — which is set to air on Valentine’s Day — and the production company called them back for a third audition.

“I have no idea what the casting process on their side was like,” Diaz explained. “I only know my half of the deal . . . I imagine they auditioned thousands of people.”

Having acted professionally since after their college days at Adelphi University, Diaz recognized that any number of factors could influence a casting decision beyond the audition performance. Height, skin color, build and voice among others all come at the preference of the creatives behind any project; it’s the nature of the industry. “You just can’t take it personally,” they said.

But a third callback was a sign casting was seriously considering them.

Most of Diaz’s fellow cast members are Canadian, including the film’s co-star Finn Wolfhard of “Stranger Things” fame, but for Diaz, they said, “I’m just a kid from Long Island.”

Within a week they were flying first-class, for the first time, to Canada. Although set in a Midwestern neighborhood, “Afterlife” was shot in Calgary, Alberta, and the surrounding areas, including Drumheller, where roughly half of their scenes were shot.

Diaz plays a minor character named Swayze, who, as part of a group of teens hanging out at a local diner, befriends Wolfhard and his other child co-star’s character played by Mckenna Grace.

Diaz spent two separate weeks on location for shooting throughout the summer, and director Jason Reitman, known for the films “Juno” and “Thank You for Smoking,” among others, asked that Diaz spend time with their fellow cast members in their off time to make the group’s chemistry seem believable.

“He was very hands on,” Diaz said of Reitman, taking them out to lunch, dinner and coffee, and, on set occasionally handing them extra unscripted lines before takes.

While Diaz didn’t have the opportunity to meet some of “Afterlife’s” bigger stars such as Paul Rudd and Bill Murray (they had no scenes together) months later they still keep in contact with the friends they made throughout those two weeks, whose names they quickly rattled off, giving updates on their latest gigs.

“Sometimes even now it doesn’t seem real,” Diaz said, adding, “You don’t get to relive it, but it’s nice to reflect.”

‘Just a kid from Long Island’

Diaz was born in Queens, and moved to Valley Stream with their parents when they were 4. They spent first  through fifth grades at Wheeler Avenue before moving to Georgia.

Moving through their adolescent and teenage years, they became interested in performing, initially as part of a music group. “I was hell bent on being in a band,” Diaz said, but lacking any musical skill beyond vocals at the time, the prospect seemed unlikely.

Then, in 2010 Diaz saw the David Fincher film “The Social Network,” and the performances left a profound impression on them, thinking as they left the theater, “This is what I want to do.”

Their mother enrolled them in an acting class for kids, but at age 15 among a group of much younger children, it was an awkward fit. Still, the instructor was impressed, and encouraged Diaz to continue.

Seeking an environment more conducive to starting an acting career, Diaz and their mother moved back to Valley Stream, where they enrolled at Central High School. There they studied under Theater Director Elizabeth Kott, who they said was a foundational figure in their career, describing her as the “slingshot” that got them to where they are today.

“Sydney was always willing to take risks, and jump in and try something no matter how wacky it might seem,” Kott recalled. “They were always trusting in the process. To be able to step out of your comfort zone is paramount in the acting business, and when it doesn’t work, to accept it, and then take the risk a second time, a third time or a 25th time.”

Kott noted Diaz’s work ethic, recalling that when she cast them in the leading role for the school’s production of “Our Town,” they came prepared on the first day of rehearsal with all of their lines written on index cards. She isn’t surprised her former student has met with initial success in acting.

After graduating in 2013, Diaz attended Adelphi to study acting, doing theater-tech work there on the side to make money, and spending upward of 12 hours on campus every day, showering in the Theater Department dressing room, going home only to sleep.

Midway through their time at Adelphi, Diaz heard through a friend they met on the social media platform Tumblr that Shirley Grant was seeking trans and non-binary actors.

Having a talent management agency while still in college was a “blessing,” they said, and their career immediately started to take off.

They submitted their first self-taped audition in January 2015 and shortly after graduating in 2017, landed their first commercial role in September, and a few months later, their first recurring television role in the Netflix series “Iron Fist,” where Diaz played a character named Hex, and earned a Screen Actors Guild card.

In the world of acting, Diaz acknowledged their good fortune, “You’re lucky to get that in your first five years acting,” they said.

But after that, they didn’t book another role for a year, before getting another handful of back-to-back minor television roles, and eventually “High Fidelity.”

“It can be very inconsistent,” they said of the industry’s realities.

Diaz considers themselves trans masculine, but it wasn’t until they saw an openly trans character in the series “Shameless” that it really occurred to them that, “as far as representation goes, it’s so important.”

“It was like someone holding up a mirror,” they recalled.

There have been some inroads, Diaz, said, citing Laverne Cox, who played an openly trans character on the popular Netflix series “Orange is the New Black,” among others, but Diaz said, “We need more.”

While still a new actor, and humble about their career, every now and then when Diaz stops by Adelphi, where they continue to work part-time, and glance at the dressing room shower they used to use. It’s a reminder, Diaz said, of their origins just a few years ago.