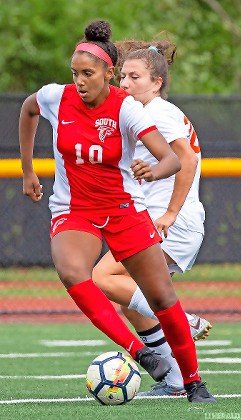 Midfielder Mia Asenjo earned New York State Player of the Year honors in 2018 as a sophomore after helping the Lady Falcons to a perfect 21-0 campaign.
J. Heck/Herald
By Tony Bellissimo

The Lady Falcons became the lowest-ever seed (No. 18) to win a Nassau County team championship and went on to capture the first state team title in the school’s nearly 75-year history as well. They went 21-0.

“Last season was just incredible and rarely can you have a year like that and bring back so much talent,” coach Demetri Adrahtas said. “We’ve set the bar high again. Unfortunately, we’ve been stung by two terrible injuries. But the girls still have a chip on their shoulder and they’re anxious to prove they belong in the top conference.”

South rose dramatically from Conference A-V last fall to A-I where it’ll face Garden City, Mepham, Calhoun, Wantagh, Manhasset and South Side twice apiece. “Conference I is a grind and we respect all those teams that have done in year after year,” Adrahtas said. “Now we have to go through it without two of our top five players, so it’s even more of a challenge.”

South’s defense and offense both took a hit with major losses — one before the season and one last week. Junior center-back Hailey Roberts suffered a torn ACL and more in the conference opener (scoreless tie) against Calhoun on Sept. 10. Sophomore forward/outside back Nia Anjou suffered the same injury in late June. “Hailey is as valuable as anyone we’ve got and Nia is also dynamic,” Adrahtas said. “It’s tough. It creates depth issues and issues where other girls will play.”

A day after losing Roberts, a Binghamton commit, the Lady Falcons dropped their first game since 2017 when they fell at Wantagh, 4-2.

Last year ended in dramatic fashion when then juniors Kayla Camacho and Bryanna Pizarro hooked up for the only goal of the state championship game against Jamesville-Dewitt with 27 seconds left in the first of two mandatory 10-minute overtimes.

Pizarro, who is headed to Oregon State, earned All-State honors last season while totaling 44 points. Thirty of those were goals. She’s also a forward. “Bryanna’s just relentless and probably as strong as any high school player I’ve seen on the ball,” Adrahtas said. “She’s so competitive and her motor is always running.”

Reigning NYS Player of the Year Mia Asenjo (22 goals, 17 assists) leads the way at midfield. Only a junior and committed to play at Central Florida, she’s the total package, the coach said. “Mia’s a gifted player who works extremely hard and wants to go as far as she can in the sport,” Adrahtas said.

In the back, speedy senior Lexi McNeil and talented sophomore Avani Voytelmgum start in the center with seniors Allyson Camacho and Christina Hillary on the outside. New goalkeeper Alexis Navarro, a sophomore, brings solid mechanics.