A fifth win for Seaford shutterbug 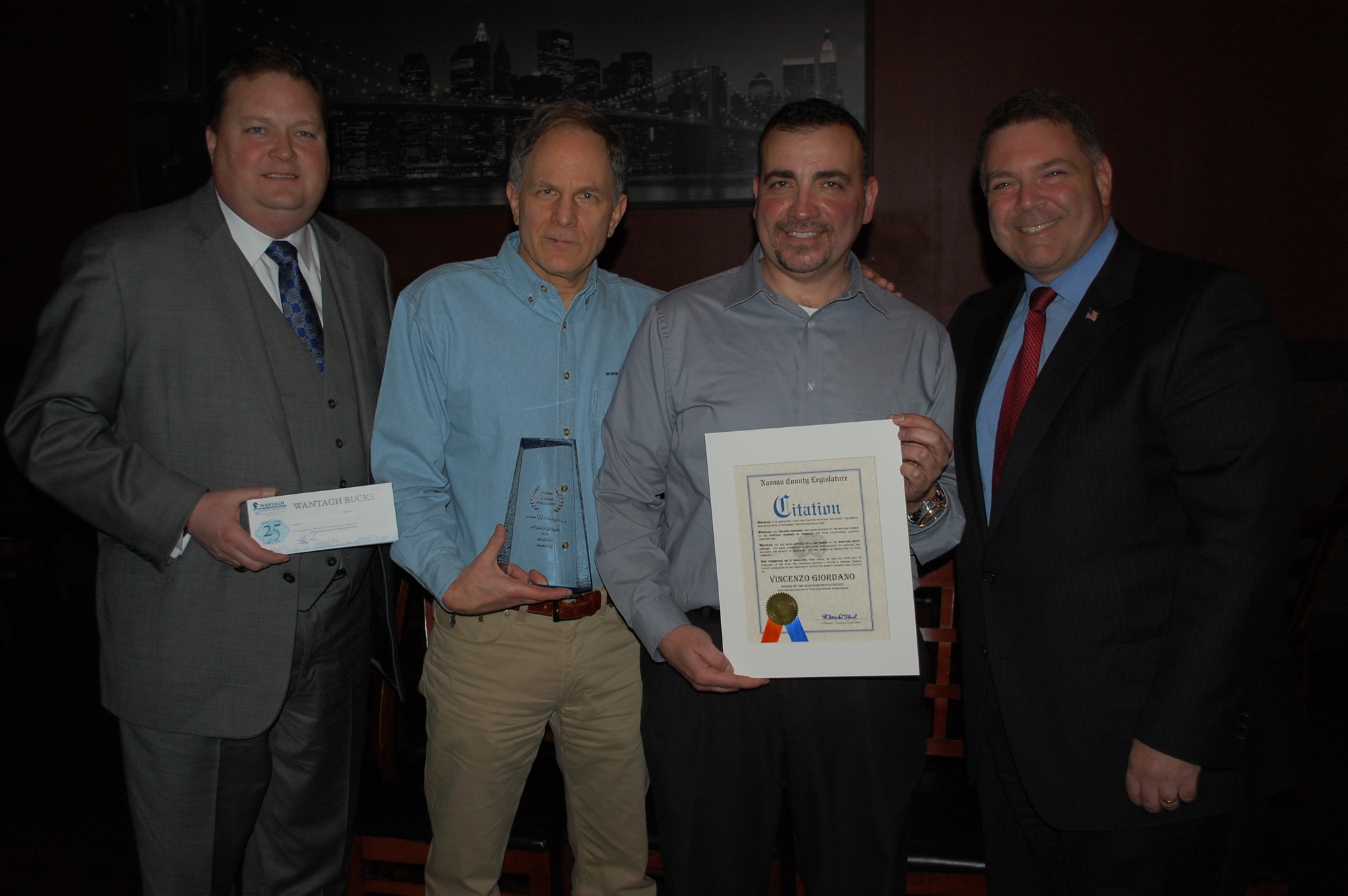 Vincenzo Giordano, second from right, was recognized as a five-time winner in the Wantagh.Li photo contest. Joining him were Chamber of Commerce President Chris Brown, Jim Colotti and Legislator Steve Rhoads.
Andrew Hackmack/Herald
By Andrew Hackmack

When Vincenzo Giordano’s picture of a frozen Atlantic Ocean was chosen as Wantagh.Li’s photo contest winner for January, he became the local website’s latest five-time winner.

Giordano, who lives in Seaford, was recognized for this accomplishment before the Wantagh Chamber of Commerce’s Feb. 9 meeting. He received a trophy, certificates from the Nassau County Legislature and Town of Hempstead, $100 in Wantagh Bucks to be used at participating businesses, and a one-year subscription to the Herald.

He took his winning picture last year, where the Atlantic Ocean meets the shore of Wantagh Park, showing ice-covered rocks and water at dusk.

“It feels like a real honor,” Giordano said, whose first photo contest win came in August 2014 with a picture of boats lined up at the Wantagh Marina at dusk. He had posted it on Facebook, and friend suggested he enter it in the photo contest.

It didn’t take long for his second win. That came a month later, and entries of his were also chosen in March and November 2015. “I try to submit the ones that I think are pretty good,” he added. “Just to win is actually pretty awesome.”

Giordano, 47, took photography classes when he was a student at Grover Cleveland High School in Bushwick, Brooklyn. Back then, he used film, and he picked up digital photography as a hobby in 2006. Giordano said he prefers Canon brand equipment.

“You can’t beat digital,” Giordano said, citing the instant gratification. “You get to see it right there.”

Among his favorite places to shoot locally are Wantagh Park, the west end of Jones Beach and the Massapequa Preserve. He particularly enjoys taking pictures of scenery and wildlife. “I try to get out as much as possible,” Giordano said, noting that he is regularly out shooting on weekends. “There’s so many places on Long Island that you can take pictures.”

He added that he likes to take long-exposure shots, which capture unique effects on the water or cloud movement in the sky. Giordano said he is always thinking about lighting and shadows, and wants to capture “that unique moment.”
Giordano, a father of two, is vice president of an audio visual company in Hicksville and has a side business doing portrait photography.

The photo contest is open to anyone, regardless of age or where they live, but photos must be taken in Wantagh. They are judged based on originality, composition, balance, content and overall appearance.

Once photos are submitted, they remain in the contest for a year. Jim Colotti said that the judges typically like to choose seasonal photographs. He said that many of the submissions are of landscapes and animals, but he would like to see more entries with people.

For more information, to see past winning photos or to submit a picture, visit www.wantagh.li/photo_contest/.