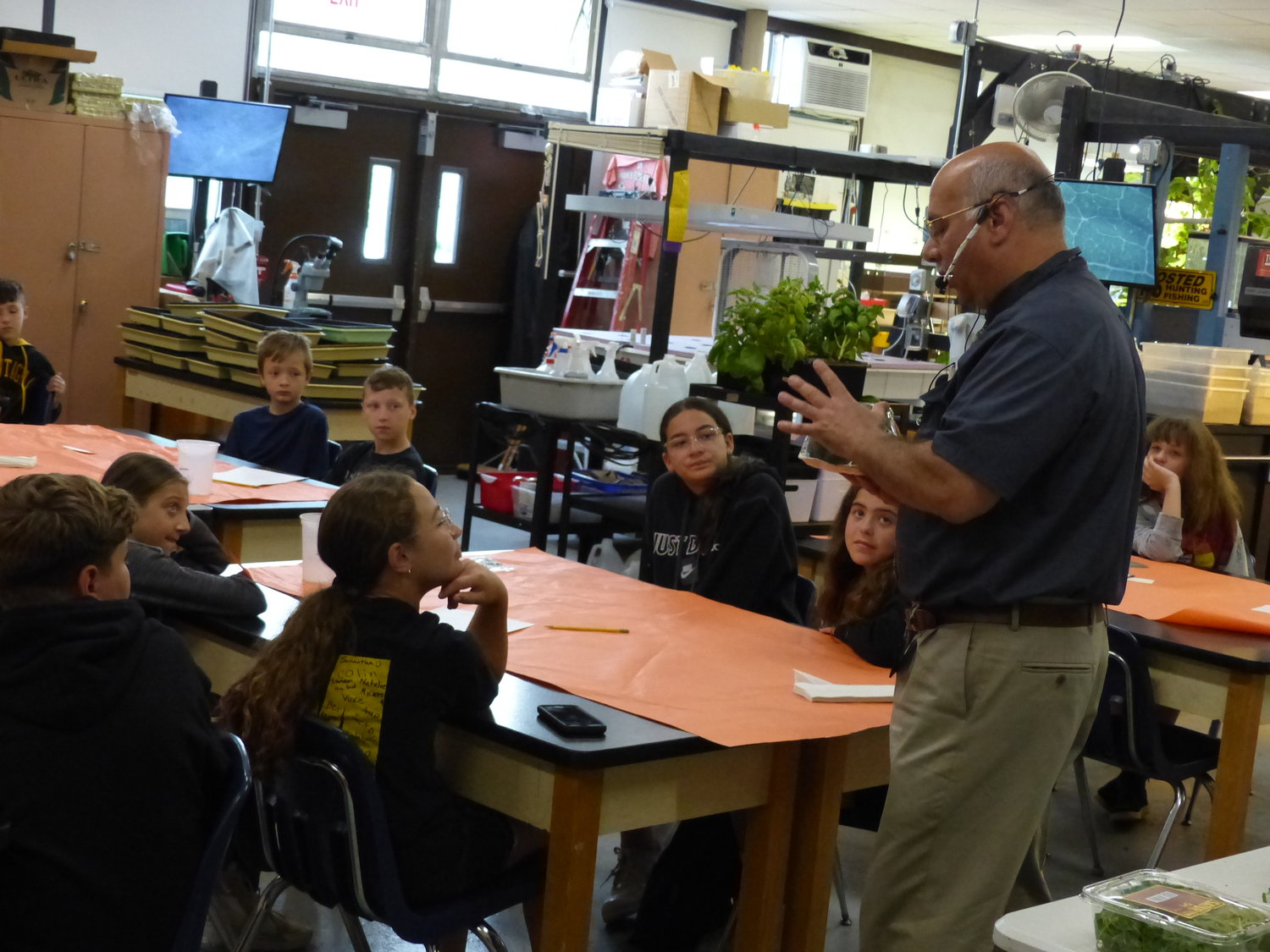 Salvatore Mule spoke to a class of students from Mandalay Elementary School, hoping to pique their interest in hydroponics early in their academic careers.
Michael Malaszczyk/Herald 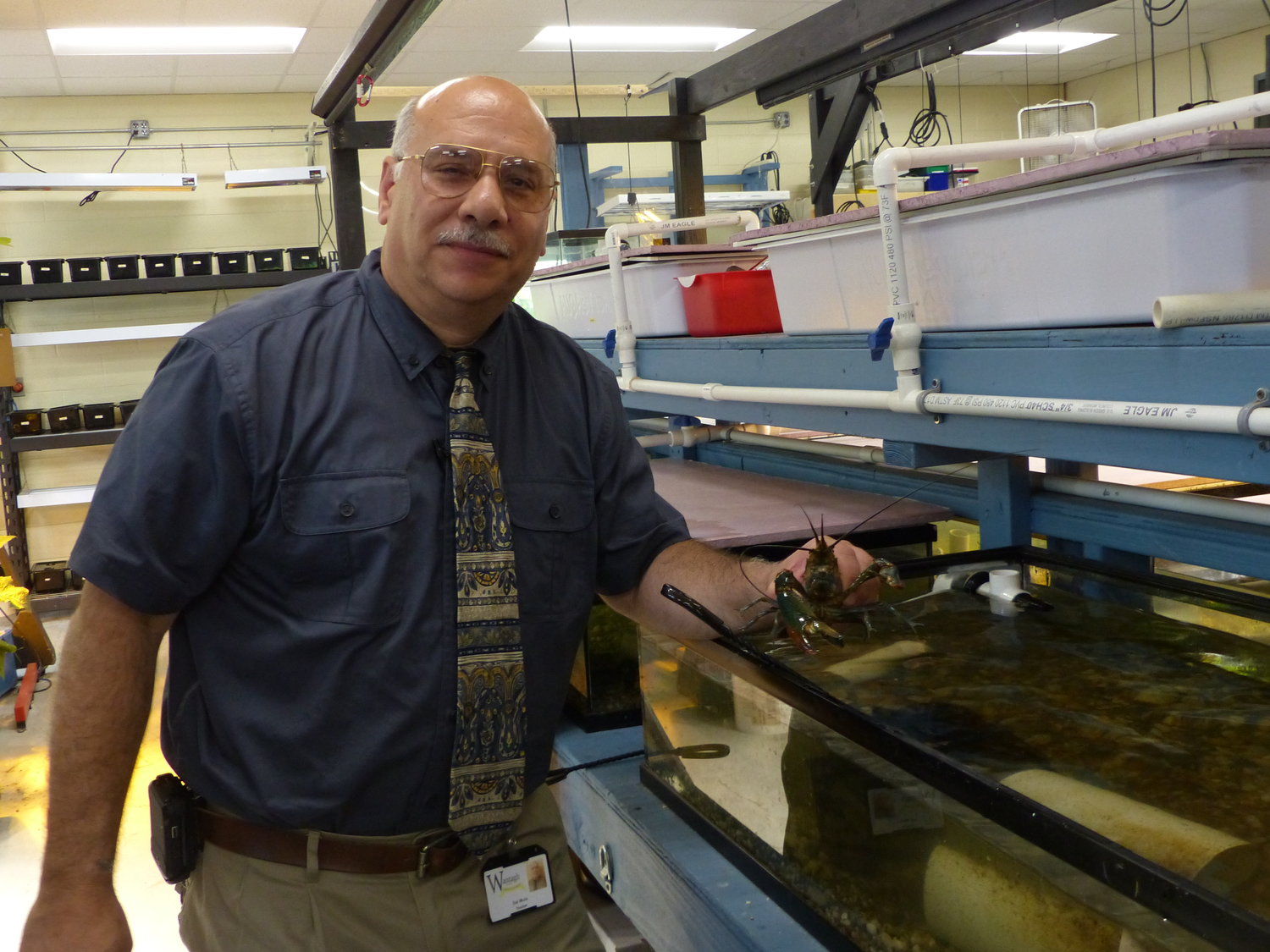 What started out in one of the Wantagh Middle School’s custodial closets has grown into one of the school’s largest academic programs.

The students have taken an active role in hydroponics — the process of growing plants without soil, enabling any crop to be grown year-round ,as opposed to seasonally. Wantagh Middle School science teacher Sal Mulé had a passion for this growing method of food production, and kick-started the program 25 years ago at the middle school, growing crops out of custodial closets. As the program grew more popular, Mule was able to move into a large science lab, with about half of the classroom taken up by the hydroponics, and the other half set up for lecturing.

Mulé said he feels that it is very important to teach children hydroponics for a number of reasons, especially since the crops can be grown year-round. They crops also require less space than fielded crops, and do not require any pesticides, herbicides or fungicides.

In Mulé’s classroom, students grow vegetables such as kale, basil, eggplant and peppers. They also grow a number of micro-greens, which are getting more popular in the market.

The students are also treated to a sub-division of hydroponics, known as aquaponics, where fish are kept in tanks connected to plants. This becomes something of a self-sustaining system, as the fish waste produces fertilizer for the plants and the plants both filter and oxygenate the water. The idea of aquaponics is to create a system of both sustainable crops and fish for consumption.

Mulé keeps tilapia and Australian red-clawed crayfish in these aquaponic tanks. The students affectionately call one of the larger crayfish “Sid” after a character from the “Toy Story” movie.

“I started in a couple of custodial closets until some funding came our way,” Mulé said. “So I was able to expand into a classroom and get some larger, fancier equipment. But ultimately I’m not trying to spend too much money on all of this. I want to show the kids that hydroponics is an affordable and effective way of making food.”

Mulé teaches both middle and high school classes, though his classroom is located in the middle school. He said his class was profoundly impacted by the coronavirus pandemic.

“It was a sad time for me,” said Mulé. “This is a very hands-on course, and that’s why the students take it. They want to work.”

According to director of science Carol-Ann Winans, Wantagh Middle School persisted, thanks to Mulé’s work.

“He came in when everything was shut down and worked in the lab,” Winans said. “He made videos for the kids to watch.”

The effort by Mulé and the science program is already bearing fruit.

The 2022 Wantagh High School valedictorian, Julianna Rose, will be attending Cornell University in the fall with a major in plant science. She has a distinct interest in hydroponics, as a result of working in Mulé’s lab.

“It’s the ultimate payback as a teacher to know that students are getting more interested in this,” Mulé said. “Whether it’s as a career or as a hobby, it doesn’t matter. I’ve had parents call me to say, ‘We need to discuss this hydroponics thing’ because their kid loved this class.”

Both Mulé and Winans said they hope to see the expansion of this program, which will continue to inspire students at Wantagh. Mule said he wants to expand to have a greenhouse as large as a football field.

“I’d like to take over the football field with a humongous greenhouse and make it look like something you see in Epcot,” Mulé said, with a smile.