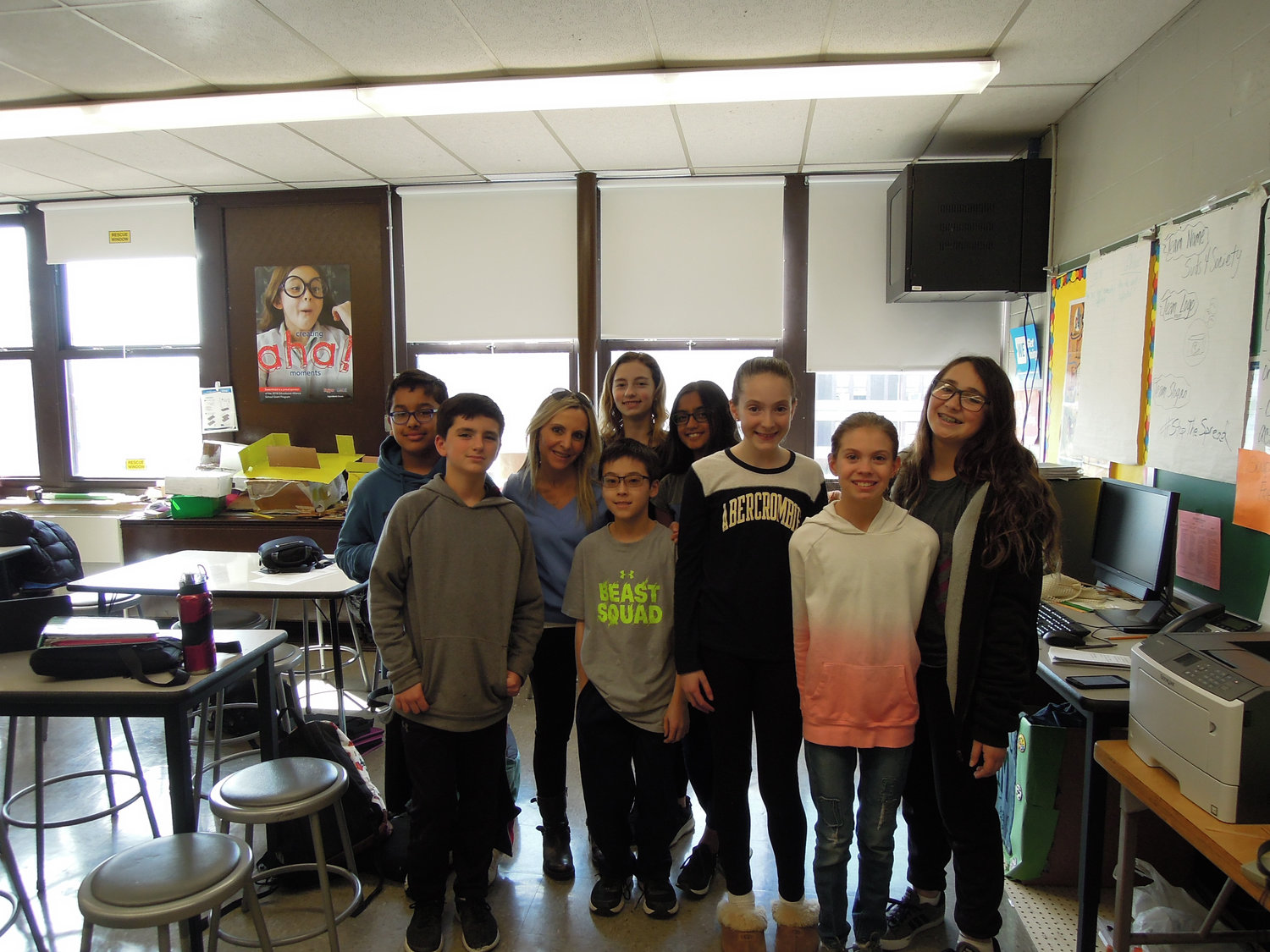 Eleven is an age that is often marked by change. Not quite children and not yet teenagers, many at this age begin to look around themselves and to reach out into the world. No group of sixth-graders better embodies that than the students at Wantagh Middle School who are part of teacher Patti Andreolas’ Horizons Program.
Three of Andreolas’s teams were cited by the Lead2Feed Student Challenge for their work in creating social action businesses to benefit their classmates and community. The school’s Es-SCENTial Melts team was one of only five grand prize winners nationally, and was awarded $10,000 in prize money, to be donated to the charity of the team members’ choice. Two other teams — SoupRSouls and Waste-less DENIM — took home $500 second-place prizes.
“No other school in the country had three prize winners,” Lead2Feed Program Manager Linda Spahr said. “We’re thrilled to have Long Island winners, and it’s just so inspiring to see kids this age be this aware of these issues.”
EsSCENTial Melts aims to improve the mental health of classmates and community members by creating products that help them de-stress, team member Skylar Mondelli said. “We started researching mental health to try to find out what helps calm people down,” she said.
Eventually, the team decided to produce two aroma therapy products: wax candles, made from recycled crayons; and eye pillows. Both products are scented with lavender and other herbs noted for their calming properties, Mondelli said. The candles release their scent when burned; the eye pillows are small rectangular pillows placed over the eyes.


The team advertised its products via social media, selling them in the school store and at local King Kullen supermarkets, Mondelli said. By the middle of last week, they were sold out, but the team intends to continue manufacturing its products, employing sustainable processes.
Mondelli said her class studied the 17 Global Goals that world leaders had set forth in 2015 as part of the Bill and Melinda Gates Foundation #Envision2030 to change the world for people with disabilities. Sustainable development was the third of the goals, according to Mondelli.
“We really wanted to build something for others who have mental illness,” team member Emma Cloato said. “Lead2Feed guided us through the process. They taught us what we needed to know about how business works, and they taught us about leadership.”
Team members also persuaded the school to set aside space where students can come for “restorative breaks.” The money from the prize, as well as all the more than $2,000 in profits from product sales, will be donated to the Born This Way Foundation, a nonprofit organization founded by Lady Gaga and dedicated to helping those with mental illness.
The SoupRSouls team directed its efforts toward hunger — a requirement of the early challenges, according to Spahr. Members created decorative bowls formed from recycled paper that was hardened. The bowls were then sold in partnership with Bigelow’s Restaurant in Rockville Centre, which offered a free bowl of soup to anyone who bought one of SoupR’s bowls.
The third team, Waste-less DENIM, collected old jeans and recycled them into decorative cell phone carriers. The group decided on the project after learning that Americans account for more than 70 pounds per year of wasted denim, team member Lisa Wasniewski said.
Much of the waste goes into landfills, Isabella Cicero said. In China, where many of the jeans are manufactured, indigo dye runs directly into rivers. “And the jeans are made by 5- or 6-year-old children,” she said.
The second-place teams have not yet settled on recipients for their profits and prize money. SoupRSouls wants to donate to programs that provide animals to families in the Third World. A goat not only constitutes a food source but can also provide additional income from milk or yoghurt, Andreolas said.
Waste-less DENIM wants to donate to clean water programs. According to WHOLives, a global clean water initiative, more than 3.4 billion people worldwide do not have reliable access to clean, uncontaminated water.
Andreolas stressed that the students themselves chose their projects. Lead2Feed coached them on some of the business aspects of the projects, including branding, team building and writing elevator speeches, which they had down pat.
In addition to business skills, “they learned how to work together as teams and to take on everybody’s talents beautifully,” Andreolas said.
According to Spahr, more than 7,200 teams took part in the competition, with teams from all 50 states and the District of Columbia. “It’s really inspiring to see sixth-graders with this kind of awareness of social issues,” she said.
Lead2eed is one of the initiatives of Lift a Life Foundation started by Yum! Brands cofounder and formed CEO David Novak to help develop future leaders.
Spahr said that networking was a crucial component of the challenge. “It’s not only about winning a competition,” she said, “but to recognize everyone who helped them along the way and to take those people with them.”
Report an inappropriate comment