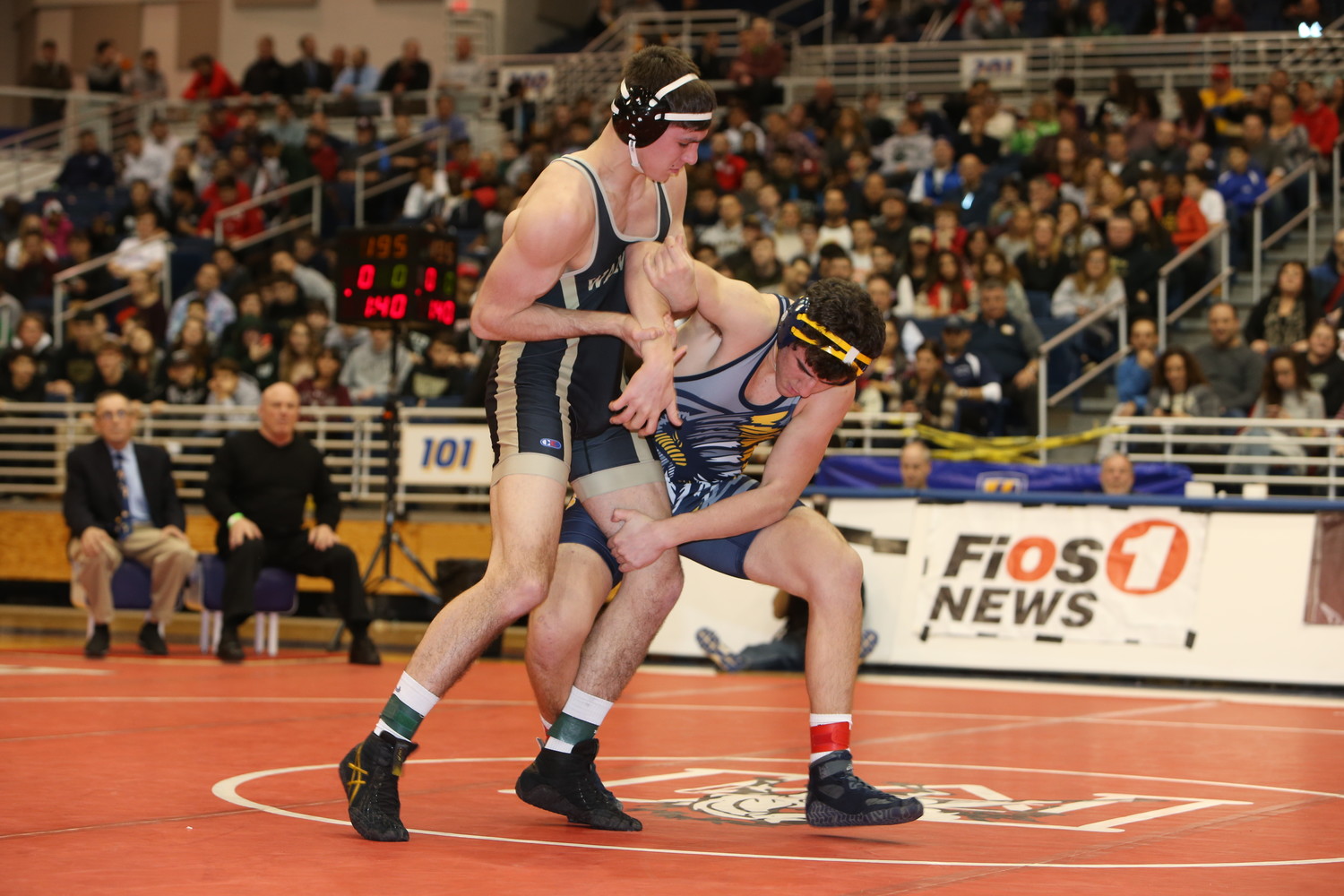 Wantagh’s Jonathan Loew, left, blocked a single leg takedown by Massapequa’s Marco Musso, right, in the first round of the Nassau County Division I wrestling championship’s 195-pound championship match. Loew later won the match via pinfall in the second round.
Jeff Wilson / Herald 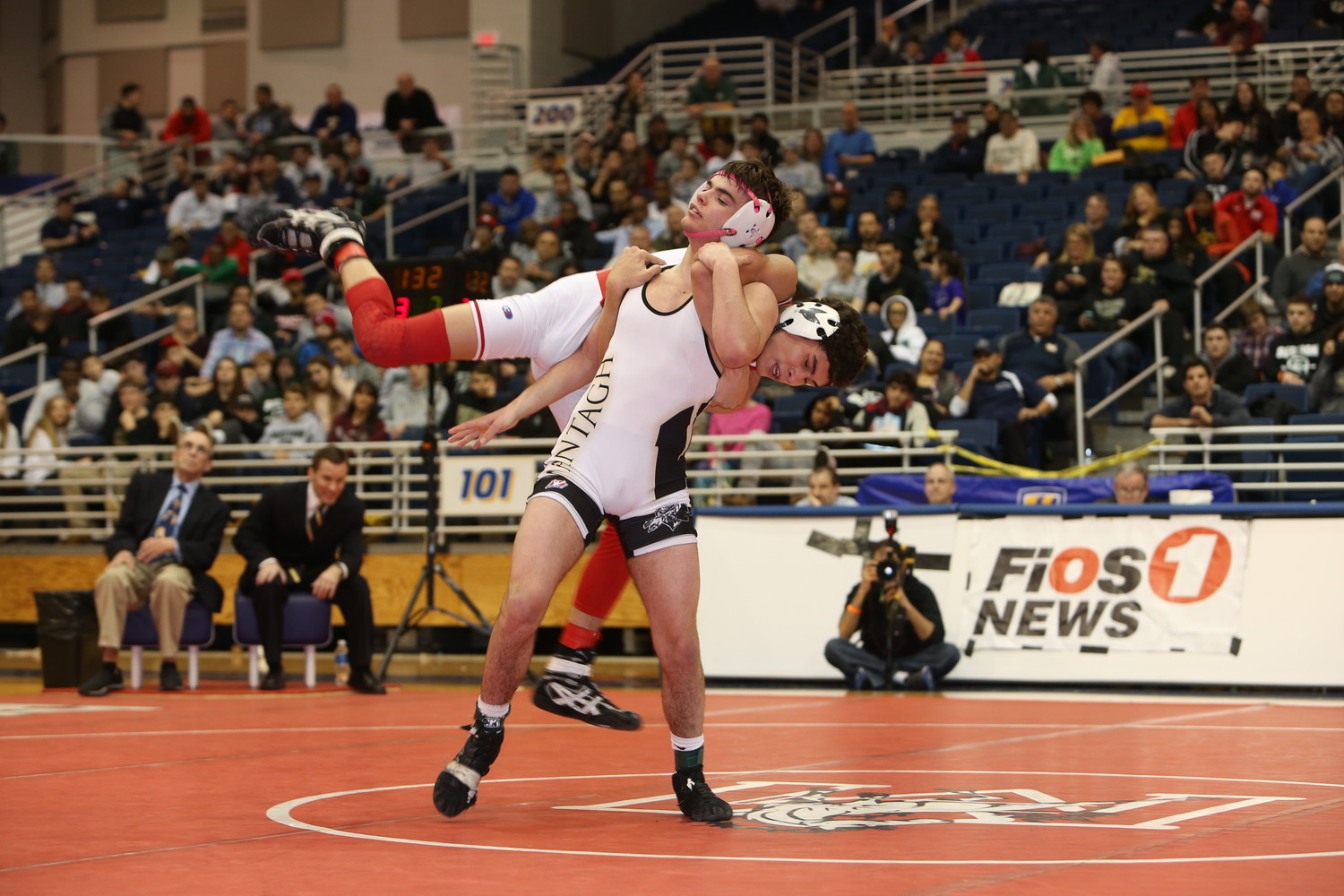 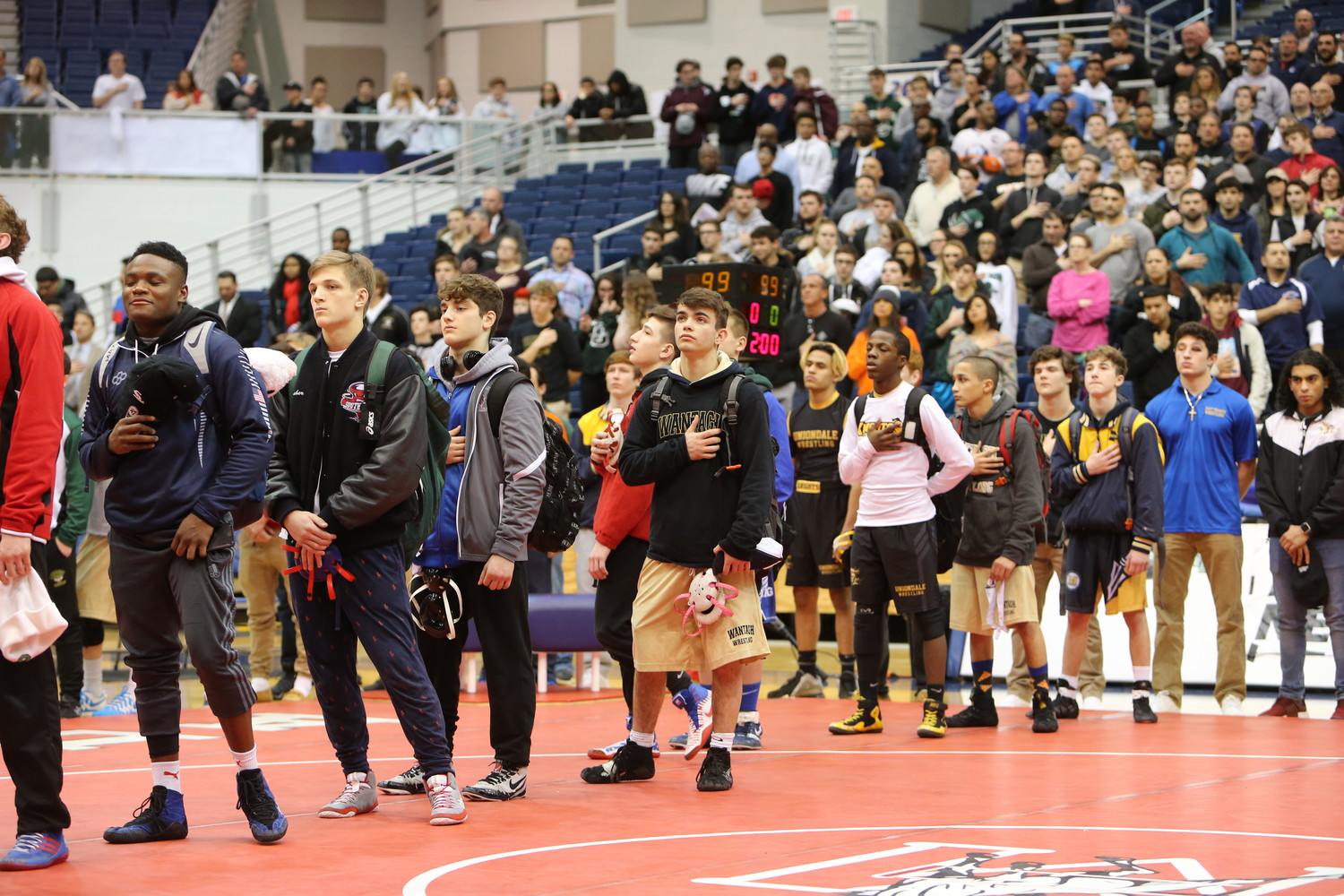 Vines, center, stood at attention for the flag with his fellow competitors. He, along with four of his teammates, would come back to the mat later in the night to win an individual county title.
Jeff Wilson / Herald 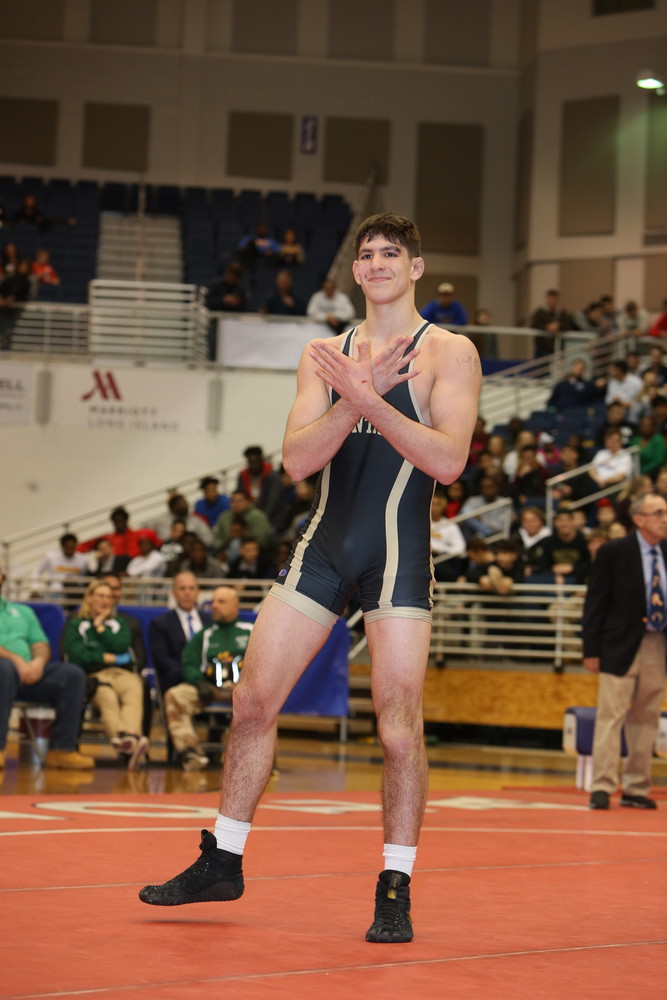 Loew was all smiles after earning his second county championship, and posed for the cameras that surrounded the mat.
Jeff Wilson / Herald
Previous Next
Jonathan Loew

Pre-match meal: Bacon, egg and cheese sandwich and a Pedialyte

As he lifted Musso’s leg up, Loew noticed that a photographer was right next to the mat. He smiled at the camera, which drew laughter from his family, friends and teammates sitting in the crowd at the county championships at Hofstra University on Feb. 11. He then returned to business. Loew pinned Musso and won the title in three minutes and 13 seconds, as well as the championship’s award for the most pins in the least amount of time.

Later that night, Justin Vines, Loew’s classmate, wrestled against Freeport’s Lee Mauras in the 132-pound title bout. Mauras had the upper hand in the first minute, but the match swung into Vines’s favor after he reversed an attack into a double-leg takedown. At the end of the three rounds, Vines earned eight more points than Mauras via takedowns, escapes and back points, earning his third county title.

After his win, Vines marched straight over to his teammates, holding up three fingers and high-fiving Loew and the rest before they settled down for the awards ceremony.

With the help of cornerstone leaders Loew and Vines, the Warriors won New York state’s first-ever Dual Meet Championship in Syracuse, and sent more than 20 wrestlers to the Nassau County Division I Championships. The program also garnered five individual county titles at the David S. Mack Sports and Exhibition Complex.

At the helm of Wantagh’s historic run was Paul Gillespie, who has coached programs at Long Beach High School and Wantagh for over 35 years. Gillespie, now in his sixth season at Wantagh, attributes the program’s success to the school’s junior program, which teaches local athletes wrestling techniques at a young age.

“We’re very fortunate to have 12 of the kids that were in our kids program, including these two guys here,” Gillespie said as he pointed to Loew and Vines.

Besides knowing Loew and Vines through the youth program, Gillespie coached Loew’s and Vines’s older siblings. Although they gave Vines and Loew the tools to succeed, Gillespie believes that their attitudes are what led them to have phenomenal wrestling careers.

“They have a great work ethic,” Gillespie said, “and have a great team concept. They are the leaders. These kids, when they speak, everyone shuts up and listens.”

During the season, Loew fought in the 220-pound weight class at a Minisink Valley wrestling tournament in Slate Hill, N.Y. Despite weighing in 40 pounds under the limit, he won the tournament’s championship, and as Gillespie put it, those moments prove that Loew and Vines are usually the two hardest-working wrestlers in the practice room.

Vines, a southpaw wrestler with almost 180 career wins, took home the 2017 state championship in Albany with a 3-0 decision victory. That win came after what Vines described as at least a 100 offseason matches, as well as practices with a statewide ranked teammate.

When Vines and Loew were in the eighth-grade — Vines’s first year on the Wantagh varsity team — they were practice partners, and although their time in similar weight classes was brief, Vines still credits Loew with making him a better wrestler.

“When we were little kids,” Vines explained, “I remember Jon wrestling, and he was amazing. And when I got to wrestle him in the room, and wrestling someone with that talent, I think that sparked it for me.”

“Even though he beat me up a lot,” he added with a laugh.

“He’s silky smooth when he wrestles,” Loew also said. “I don’t know, I just love watching him wrestle. And when he’s in a tough match, he always outlasts his opponents.”

Although Vines’s future is undecided, he said he is focused on defending his title in two weeks at the Times Union Center in Albany.

“I got tunnel vision,” Vines said. “Just working hard every single day from here on out no matter what it is or what I’m doing — lifting, running, wrestling — it doesn’t matter.”

Loew, who started on Wantagh’s varsity team as a seventh-grader, is a part of the program’s self-proclaimed “Murderers’ Row,” a name that gained its roots with the late 1920s New York Yankees.

Like that Yankees team, who had several of baseball’s best hitters such as Babe Ruth slotted next to each other in the batting order, the Warriors had their own lineup that troubled opponents at dual meets. Senior Joseph Conklin (160 pounds), sophomore Matt Rogers (170 pounds), senior James Langan (182 pounds) and Loew (195 pounds) complete the full line-up.

The Wantagh “Murderers’ Row” usually lift and practice together — Vines occasionally puts himself into the group, despite fighting several weight classes below Conklin — and usually spend their off-days bowling with the rest of the team.

That group, Loew said, was one of his keys to success during the season.

“We push each other to our limits,” he said. “Especially Conklin. He’s only 160, but he will not give us a break. He’ll bust our chops.”

Loew plans to study business and wrestle for Cornell University in the fall. He will leave Wantagh with a county record of 230 wins and 118 pins, as well as two All-American selections — with potentially a third on the way — two county championships and dozens of individual tournament titles.

While Loew appreciates his accomplishments, he wants to join Big Red with one more accolade: a state championship that he is determined to win on Feb. 24.

“States are in two weeks,” Loew said, “and I want to walk out of the Times Union Center with the first place trophy in my hands.”