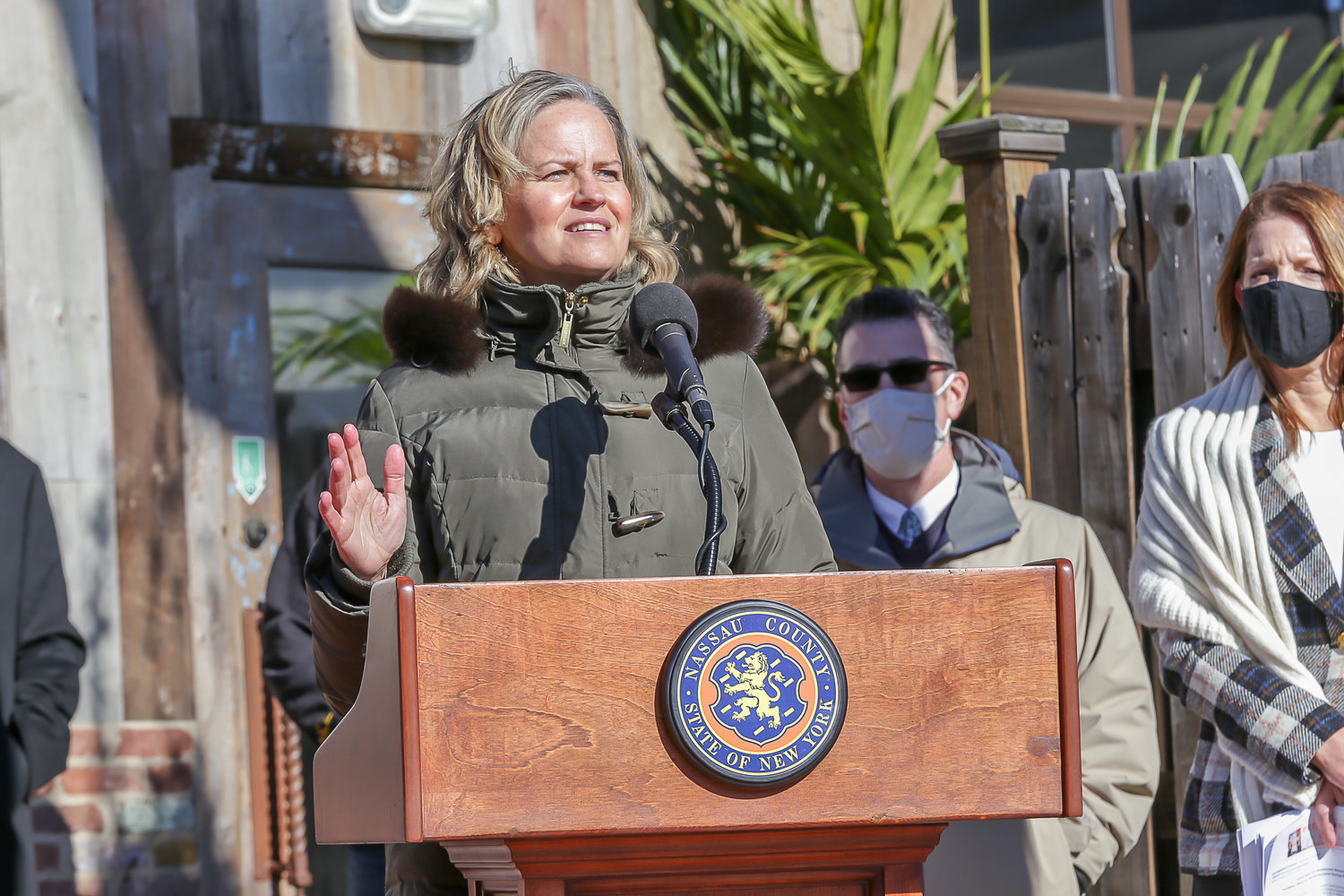 County Executive Laura Curran, above, said that the money from the settlement will be used to support mental health and addiction programs.
Herald file photo
By Mallory Wilson

The funds will be directed toward educational programs to help addicts, Walker said. “We want to send a clear message to the residents of Nassau County that we are committed to doing everything in our power to take on these drugs that have ruined our communities, broken up families, and continue to put our children in harm’s way,” she said.

According to Daniel Schrafel, the communications director for the Legislature’s Democratic caucus, the county is set to receive approximately $15.3 million of a $230 million settlement with the state by pharmaceutical manufacturer and distributor John & Johnson, which has been accused of helping to fuel the opioid crisis in New York. With the settlement, Johnson & Johnson avoided going to trial with several other opioid manufacturers.

In a statement on its website, Johnson & Johnson said that the settlement was not an admission of guilt, and that “the money given will provide New York, and all involved, funding to help address any and all opioid-related issues.” The company said it had discontinued making prescription pain medications in the U.S.

“While no amount of money will ever compensate for the thousands who lost their lives or became addicted to opioids across our state or provide solace to the countless families torn apart by this crisis, these funds will be used to prevent any future devastation,” she said.

The lawsuit originally listed smaller pharmacies, like CVS, Rite Aid, Walmart and Walgreens. Before the trial’s opening arguments, however, those smaller distributors had settled.

In 2019, Purdue Pharma filed for bankruptcy. The cases against Purdue, Mallinckrodt, and Rochester Drug Cooperative are now moving separately though U.S. Bankruptcy Court, according to a press release from the attorney general’s office.

“For far too long, opioid manufacturers have flooded communities with powerful and addictive narcotics with impunity, and the lethal addiction crisis that it spawned continues to devastate families in Nassau County and across the nation,” County Legislator Josh Lafazan said. “That is why it’s so fitting for Nassau County to use these funds to deliver life-saving treatment and recovery resources to all who seek them. I strongly support any effort that will maximize the benefits derived from these funds.”

State Sen. Kevin Thomas said, “Drug manufacturers and distributors continuously chose to put profits over human lives, creating and prolonging this public health crisis,” Thomas said. “After years of struggle and anguish, we are finally seeing the first signs of real accountability for the pharmaceutical industry’s role in the crisis.”

“Nassau County is paying a painful price to heal the damage caused by the opioid epidemic,” County Executive Laura Curran said in a news release. “We must ensure that any settlement money is used to support mental health and addiction programs in an effort to help residents and families who have been affected by substance abuse.”

While there is still work that needs to be done, Thomas said the settlement would “save countless lives across the nation, and deliver crucial funding to strengthen opioid prevention, treatment and education efforts across New York.”