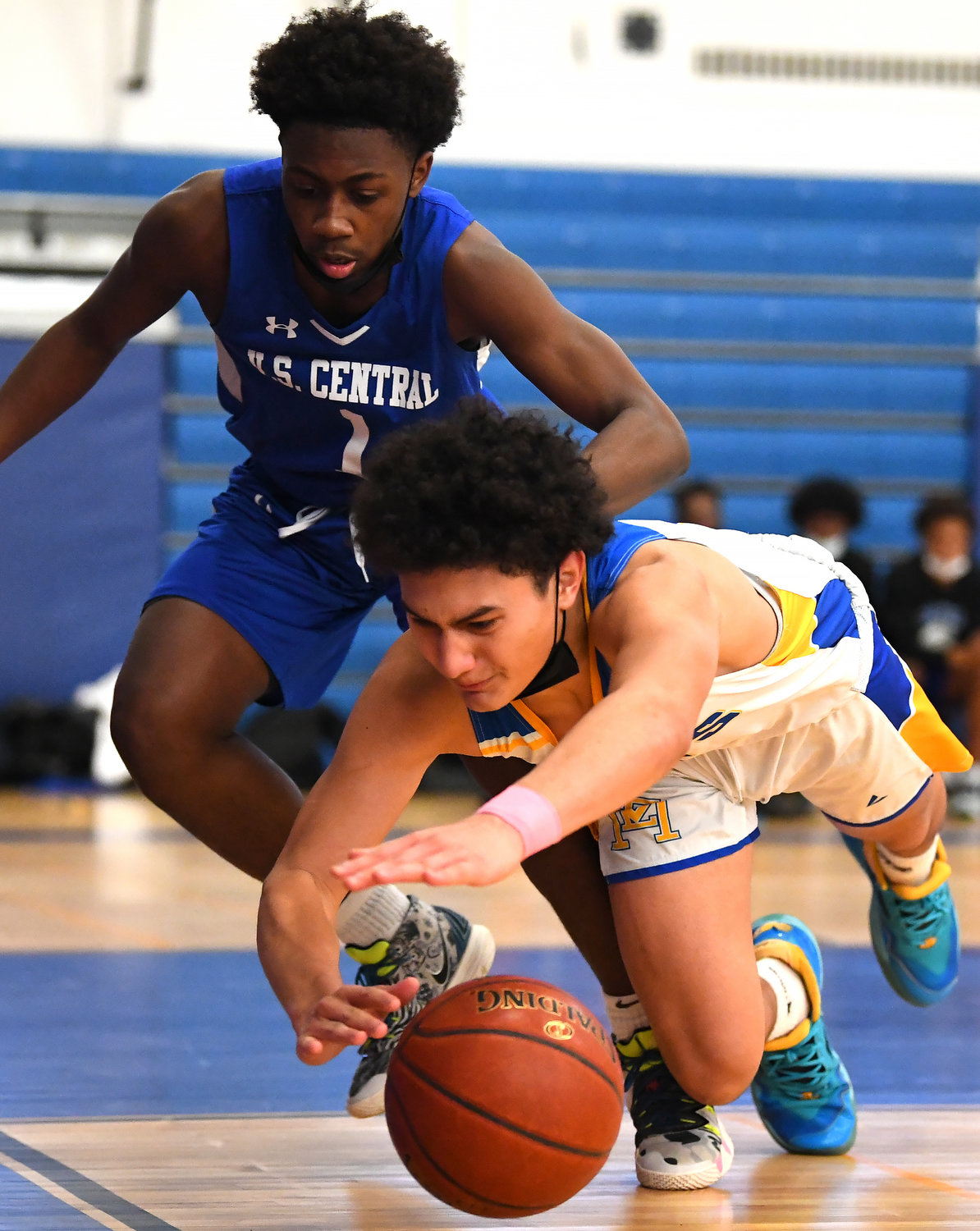 After being idle for two weeks and coming off a pair of non-league victories using just five bodies, the Jets won consecutive games against Nassau Conference AA-II rivals in less than 24 hours including a 48-42 home triumph over Valley Stream Central last Saturday afternoon.

“It wasn’t pretty but we made some timely plays when we needed to,” head coach Tom Rottkamp said after East Meadow’s fourth win a row brought its overall record to 5-6. “The kids were a little fatigued after last night and they got caught up in Valley Stream’s pace for a while,” he added. “But we made good decisions late in a tight and physical game and that’s a sign the confidence is really growing.”

Like the Jets, Central was also coming off a victory the previous night. However, the Eagles (2-6 overall) couldn’t keep their momentum going after knocking off Westbury due in large part to shooting woes from inside the paint and the foul line. They missed 10 free throws over the first three quarters yet were still within striking distance all afternoon.

“When the ball does go into the basket, there isn’t anything anyone can do,” Central head coach Tim O’Hagan said. “I thought we moved the ball well and had good looks and good attempts. It was just one of those games where we couldn’t get the ball to drop. It’s frustrating.”

Junior Jayden Henriquez scored 11 of his game-high 17 points in the first half to help East Meadow hold a 26-19 lead at intermission after Central scored 10 of the game’s first 15 points. Henriquez was the Jets’ lone double-digit scorer a day after Frank DeStephano (17), senior Jared Shary (14) and junior Manjot Singh (10) did so in a blowout win over Hicksville.

“Jayden hit some nice threes in the first half and that forced them to defend him differently, but then he drove aggressively to the basket in the second half and was effective,” Rottkamp said of Henriquez.

Seniors Malik Moore (12) and Jayden Vera (10) led a balanced albeit inconsistent Central offense. Moore (24) and junior Dylan Madden (game-high 26) accounted for almost all of its production in last Friday’s 60-51 win over Westbury.

“There are times when we do some really good things and times we don’t,” O’Hagan said. “The one thing about these kids is they’re very resilient. We’ve had some tough losses and they always respond the next day at practice.”

The Eagles trailed 39-29 after Shary opened the fourth quarter with a three-pointer but chipped away and made it a one-possession game with 3:33 remaining. Then Shary, senior Shawn Haber and DeStephano all hit clutch shots down the stretch to secure the win.

“We opened the season 1-6 and three of those losses were conference games, so it’s nice to turn things around,” Rottkamp said. “We still have a way to go but we’re in much better shape than we were two weeks ago.”