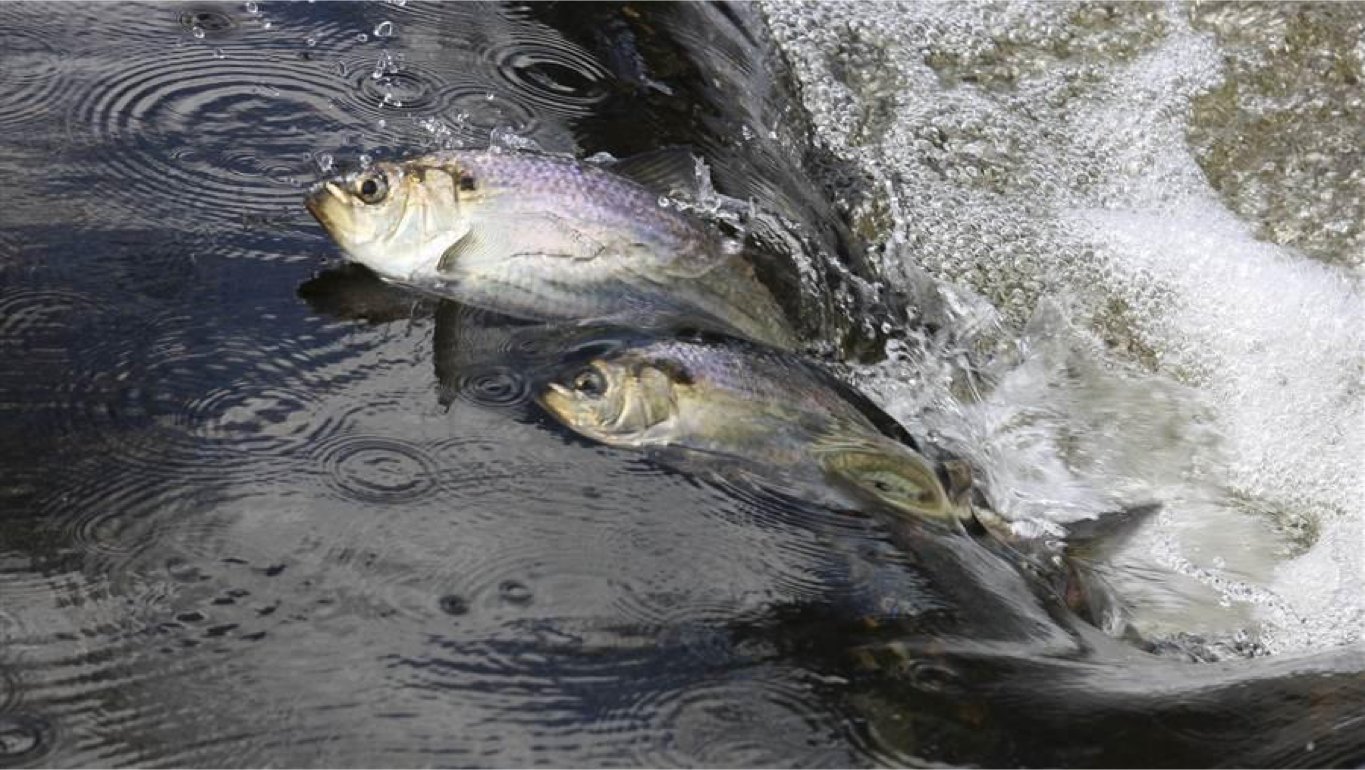 Herring can be found in Bellmore Creek as they make their way to Mill Pond to spawn in the freshwater there — but a dam obstructs their path. Seatuck’s Bellmore Creek Fish Passage Project aims to help them get over the obstacle.
Photo courtesy Emily Hall 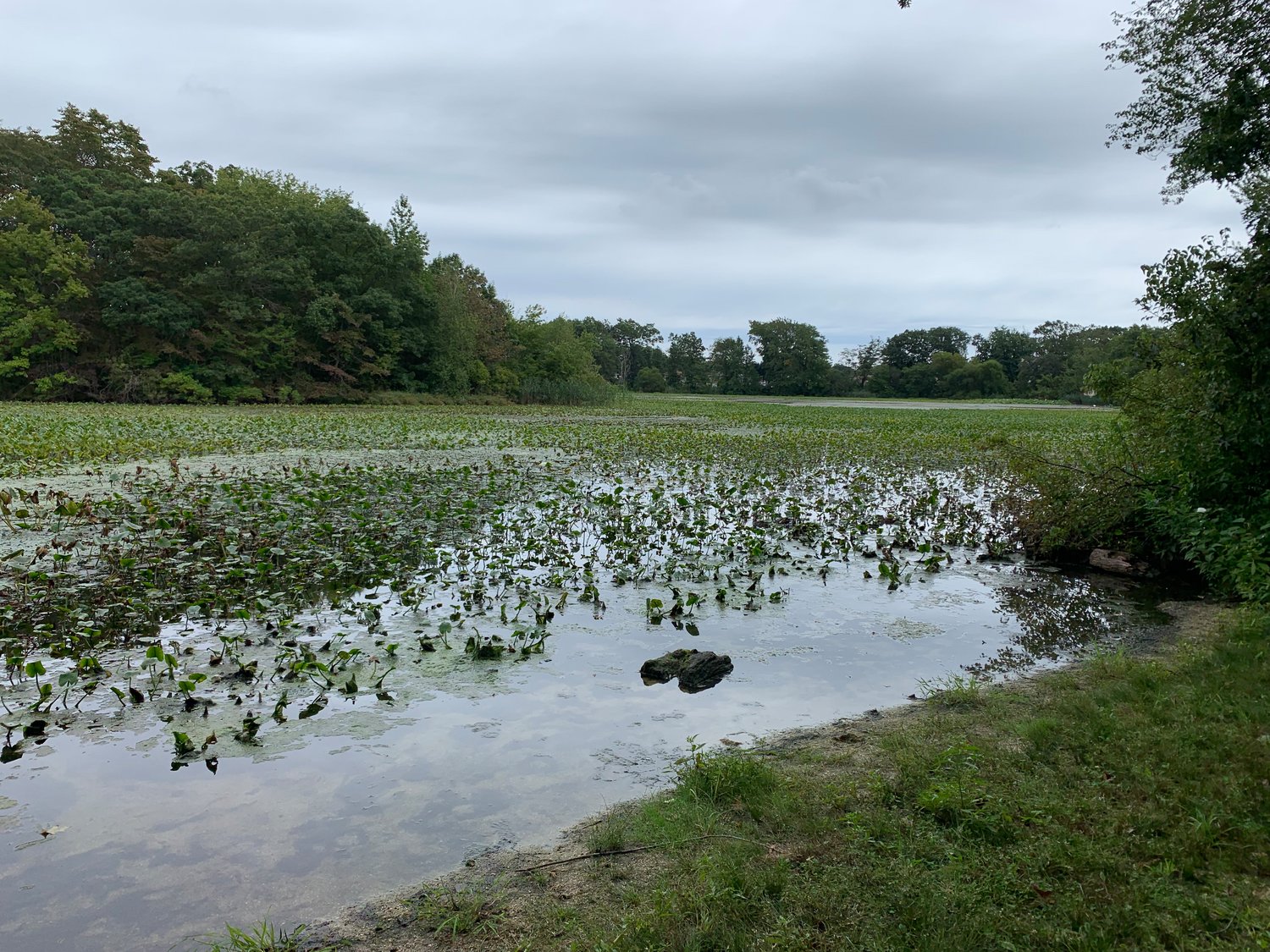 As the spring season heats the water up to 48 degrees, Herring migrate from saltwater to Mill Pond’s freshwater.
Photo courtesy Emily Hall 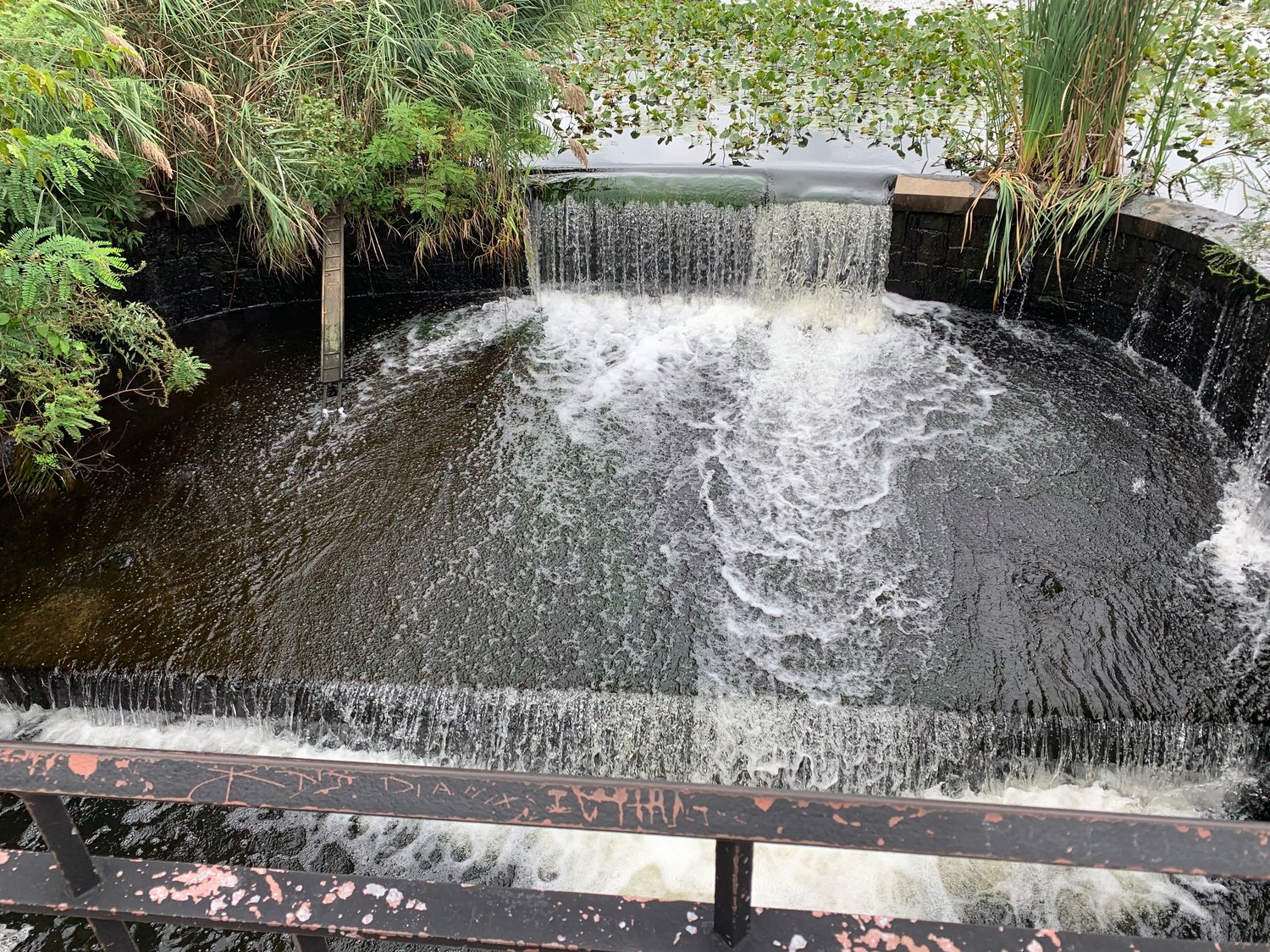 The dam at the end of Bellmore Creek blocks Herring from spawning in Mill Pond. The Fish Passage Project will likely install a ladder or man-made channel to help them pass.
Photo courtesy Emily Hall
Previous Next
Support local journalism

Looking to get out of the house? Take a stroll near the intersection of the Bellmore Creek and Mill Pond — you may be able to catch a glimpse of River Herring families splashing through the water.

Around this time, the diadromous fish start to migrate from the ocean to the freshwater pond, where they go to spawn. The growing population benefits a small part of Long Island’s ecosystem, and Bellmore Creek is one of roughly two dozen spots where Herring can be found.

Life for these travelers, however, isn’t always easy. At the spot where the creek meets the pond is a dam that the Herring (also known as Alewives) have difficulty surpassing when the water is not high enough, which can potentially harm their chances of having offspring.

“If they don’t have a spawning habitat, [Herring] populations will decrease over time,” said Emily Hall, a member of the Seatuck Environmental Association.

Hall is heading Seatuck’s “Bellmore Creek Fish Passage Project,” which aims to create a path for the Herring to get past the dam. It’s still in its early stages, but the result will likely be a ladder or bridge for the fish to swim over, or a man-made channel connecting the creek and the pond.

Why are the Herring so important, though? “Pretty much everything eats them,” Hall said. “They’re like the base food that [many animals] eat — they’re kind of like the bread. Everyone can eat them.” The Herring’s predators include large oceanic fish, such as dolphins and whales, as well as otters, raccoons and a myriad of bird species on Long Island.

Seatuck, an Island-wide nonprofit based in Islip, was awarded a grant from the New York State Department of Environmental Conservation to complete the project. Its Advisory Committee includes members from Bellmore’s civic associations, local independent environmental groups and officials from Nassau County and the Town of Hempstead.

A permanent solution for the Herring is still in the early stages of development. Requests for proposals will soon be posted to get an engineering firm on board so Seatuck can approve plans.

In the meantime, however, the Herring will be helped through more practical methods. A virtual Advisory Committee meeting was held when the in-person meeting at the Bellmore Memorial Library was cancelled due to the coronavirus pandemic.

It was the last meeting before the Bellmore Creek Fish Lift, which is still scheduled for April 27. Volunteers will go to the dam, net up the fish, and manually transfer them to the pond.

“There’s more to this site than meets the eye,” said Diane Worden, a volunteer with a background in environmental education who discovered the Herring population in Bellmore Creek. “They’re a very important component of the food chain.” A fish lift, Worden added, only takes a few people to perform.

While Hall said she wanted to open the fish lift to the public and involve schoolchildren, it may be a much smaller group now. “I was looking forward to making the fish lift a really good public event and generating more energy around the Bellmore Creek Project, so that is a bit of a disappointment,” she said. “Luckily we are in the stage where everything else can be done remotely, and the project can move forward at the pace we originally set.”

Residents can stay updated on the project at www.seatuck.org, on their Facebook page, Seatuck Environmental Association, or their Instagram, @seatuckenvironmental. If you’d like to get involved or attend an Advisory Committee meeting, email Hall at ehall@seatuck.org for more information.

“Your heart really goes out to these fish,” Worden said. “They’ve gone thousands of miles from down the east coast, and they get here, just trying their best to get over the dam.”