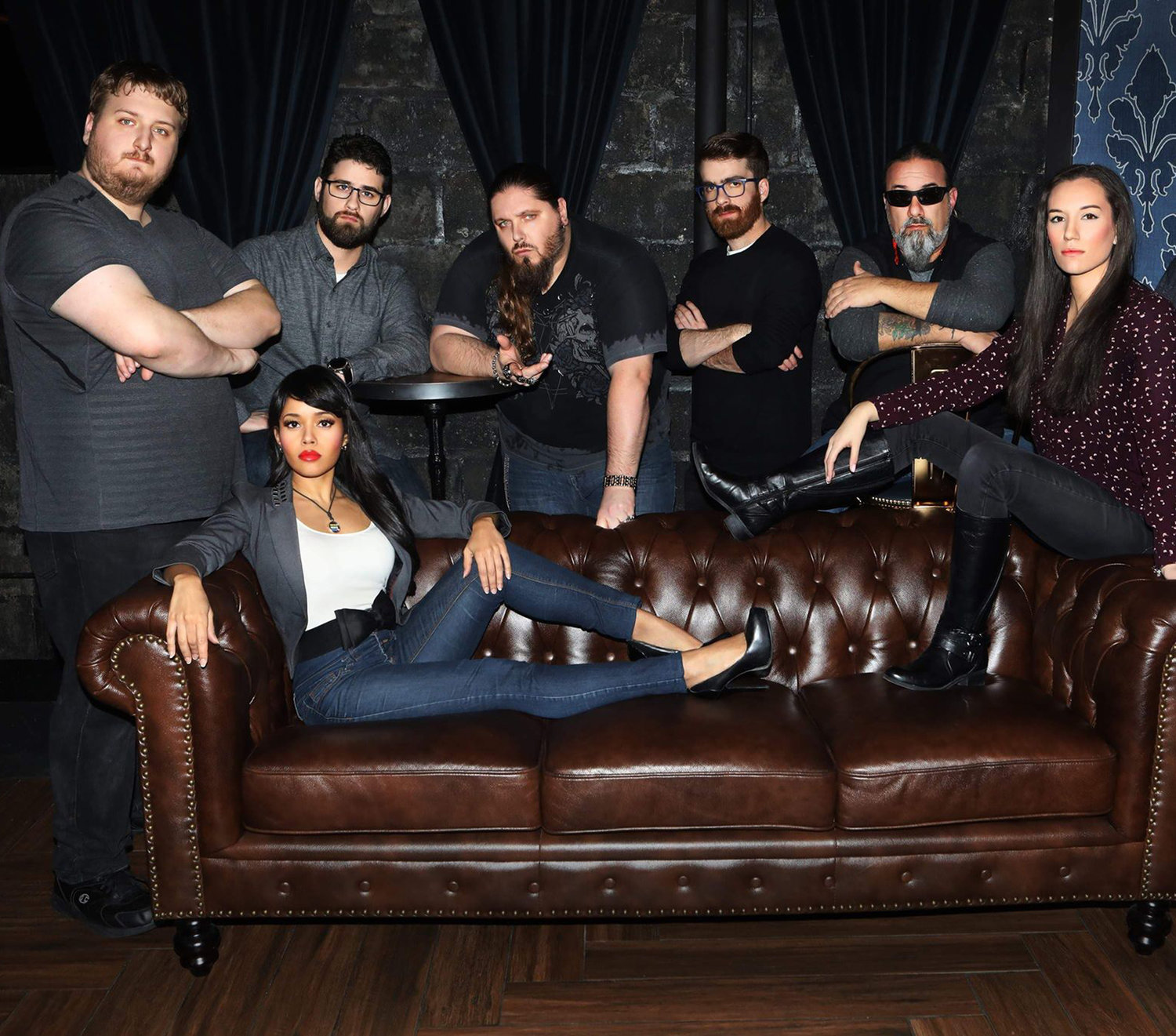 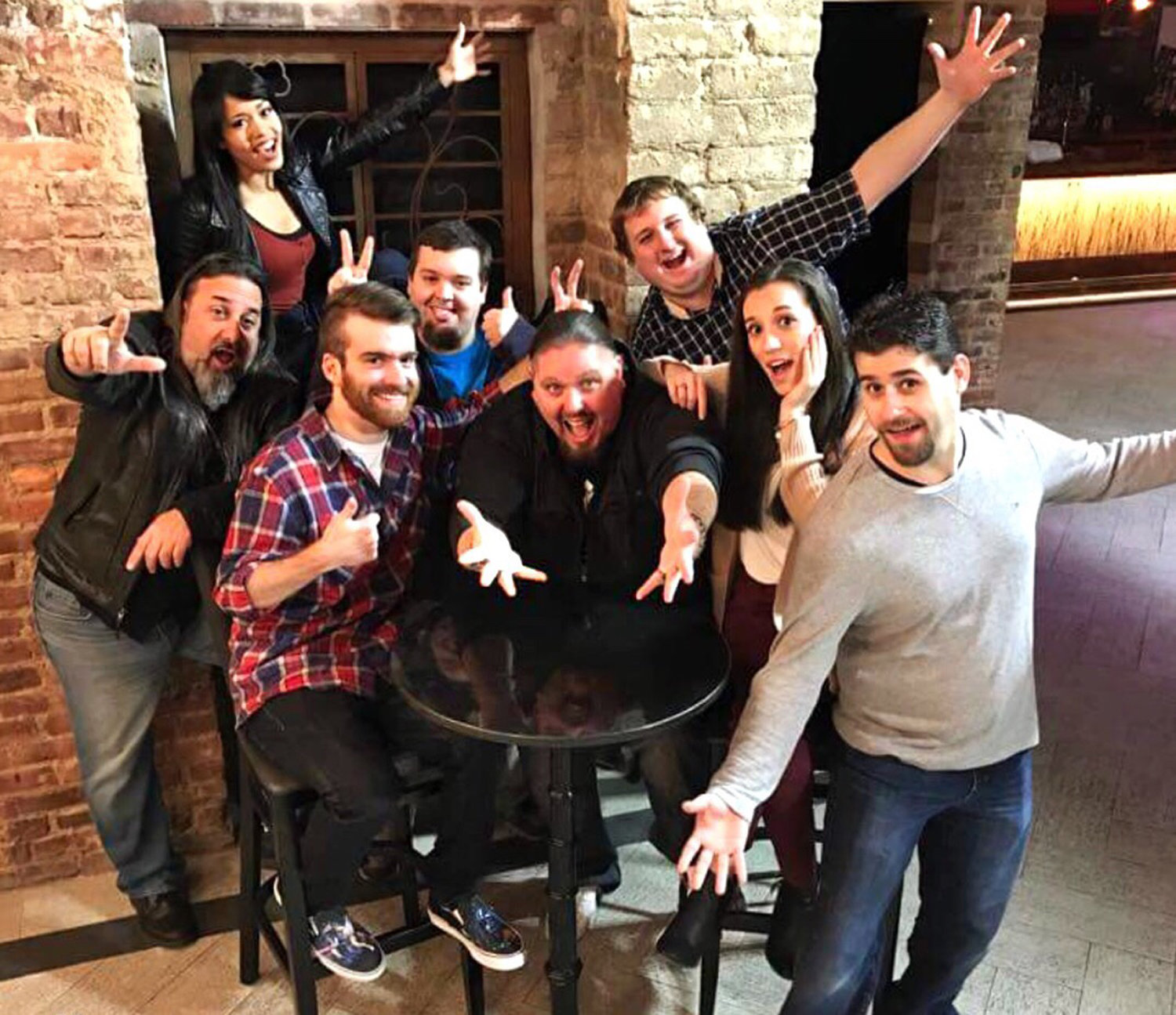 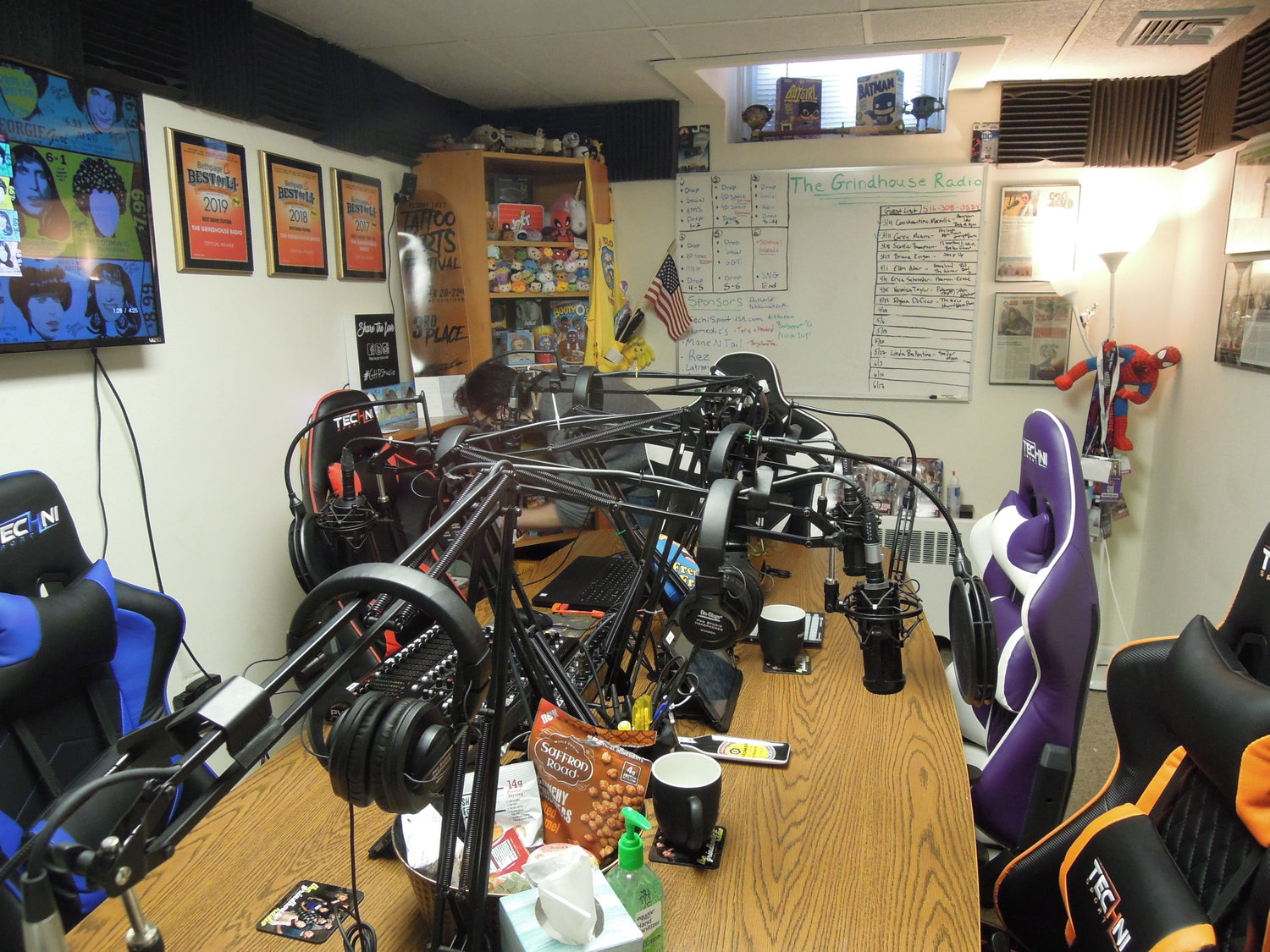 Steve Zambito, who doubles as engineer and co-producer, was obscured by a forest of microphones in Grindhouse’s intimate studio.
Timothy Denton/Herald-Citizen
Previous Next

We try to make [the show] feel like a roundtable discussion with friends.”
Steve Zambito, Cohost, Grindhouse Radio
By Timothy Denton

Two years ago, Grindhouse Radio was an up-and-comer that had just been nominated as the best radio show in Bethpage Federal Credit Union’s Best of Long Island competition. Now the broadcast, which originates in a studio in Levittown, has won its third award in the contest, and one of the show’s cohosts, Brimstone, a.k.a. William Kucmierowski, has again edged out Billy Joel as  best Long Island personality for the second year in
a row.

In the interim, the show has expanded to its current two-hour format, and its base has grown to between 3.5 million and 4 million listeners around the world — 650,000 of them in Wantagh, Seaford and across Long Island — and the studio has added two half-hour shows to its weekly lineup.

“What makes the award so special is that it’s a people’s award,” show cohost Kim Adragna said. “They have to vote for us for us to win.”

Brimstone is joined in the Thursday-evening podcasts by Adragna and cohost Steve Zambito in a freewheeling banter-based format. The show is broken into 15-minutes clips, with a games segment hosted by Adesina Sanchez, a sports feature with Tom Greer and Scott Eisenberg and a comic book segment with Kevin Dempsey.

Of the program’s genesis, Brimstone explained that “we started with just one mic and no soundproofing in the studio. From the start, it was just magic,” he said. “Kim is the one who really pulled us all together.”

Despite the show’s freewheeling format, even such zaniness needs discipline. “I’m the ringleader,” Adragna said. “When we go off on a tangent, I’ll bring us back.” Adragna also has her own segment, called “Kim’s questions,” in which the group ponders such weighty questions as, “Would you rather eat a donut or a taco?”

In addition to his role as cohost, Zambito produces and edits the show. “We try to make it feel like a roundtable discussion with friends,” he said.

The sports segment is a three-minute spot highlighting a current item of sporting news. For example, “When the Giants traded [Odell] Beckham to the [Cleveland] Browns, it was like a knife to my heart,” Greer lamented. “Mostly, we just banter. We try to make it as fun as possible.”

The studio has added two half-hour podcasts in addition to the original Thursday show: “The Magic KimTom Show,” broadcasting on Monday night; and “Within Brim’s Skin,” airing on Tuesday evening.

The shows are carried by about 20 networks, Brimstone said, including Spotify, iHeart Radio and Google Play. Besides airing their own shows, Grindhouse rents out studio space to what Brimstone calls “other cool podcasts.” And Grindhouse is negotiating with bigger networks to become a regular part of their lineup, although no one would disclose the networks with which they were in discussions.

“Yeah, we’d give up some control if went to a network,” Brimstone conceded. “But we’d get back 10 times what we’d give up.” A mainstream network affiliation would give Grindhouse greater leeway in attracting guests, “to get people who don’t normally get to be in front of the microphone,” Brimstone said.

In addition to producing the weekly broadcasts for the “fab four,” as Zambito called the quartet, the group visits comicons and other special events. For example, next month they will guest at the Vermont Sci-Fi & Fantasy Expo at the Champlain Valley Expo Center.

“It’s a blast,” Adragna said of the shows. “I love meeting new people. It’s like going to camp.” She said she was looking foreward to this year's San Diego Comicon.

“We meet a lot of great people,” Brimstone said. The group does guest spots at movie premieres, resorts and special-interest events, such as last year’s Long Island Tattoo & Arts Festival in Uniondale.

With a worldwide fan base, the group also gets messages of support from all over. One listener, a baker in rural France, wrote about how listening to Grindhouse’s humorous banter recently helped him through a difficult period.

The quartet came to Grindhouse through various routes. Brimstone has been in radio on and off since he was a child, with forays into art and professional wrestling. “I did voice-overs, and I have my own line of products,” he said. “I was a heavyweight wrestling champion overseas and in South America.” He has appeared as a guest on a number of television shows, including “Sesame Street,” and has his own comic book character and action figure.

Adragna was a student at Farmingdale State College when she came to Grindhouse as an intern three years ago. She had gotten interested in radio while still a student at Calhoun High School in Merrick.

At Farmingdale, she helped to establish the campus radio station. “We had to build it from the ground up,” she said. From her first Grindhouse broadcast, she was hooked.

Both Greer and Zambito trained at the Connecticut School of Broadcasting, in Farmington. “I’m a big-time sports freak,” Greer said. “When I was in fourth grade, I realized I wasn’t going to be a baseball player, so I decided to look at some of the other things I could do that were sports-related.” He appears to have found his niche.

With its third award on the studio wall and an expanding fan base,
the youthful crew of Adragna, Brimstone, Eisenberg, Greer and Zambito appear to have as much banter ahead as they want.