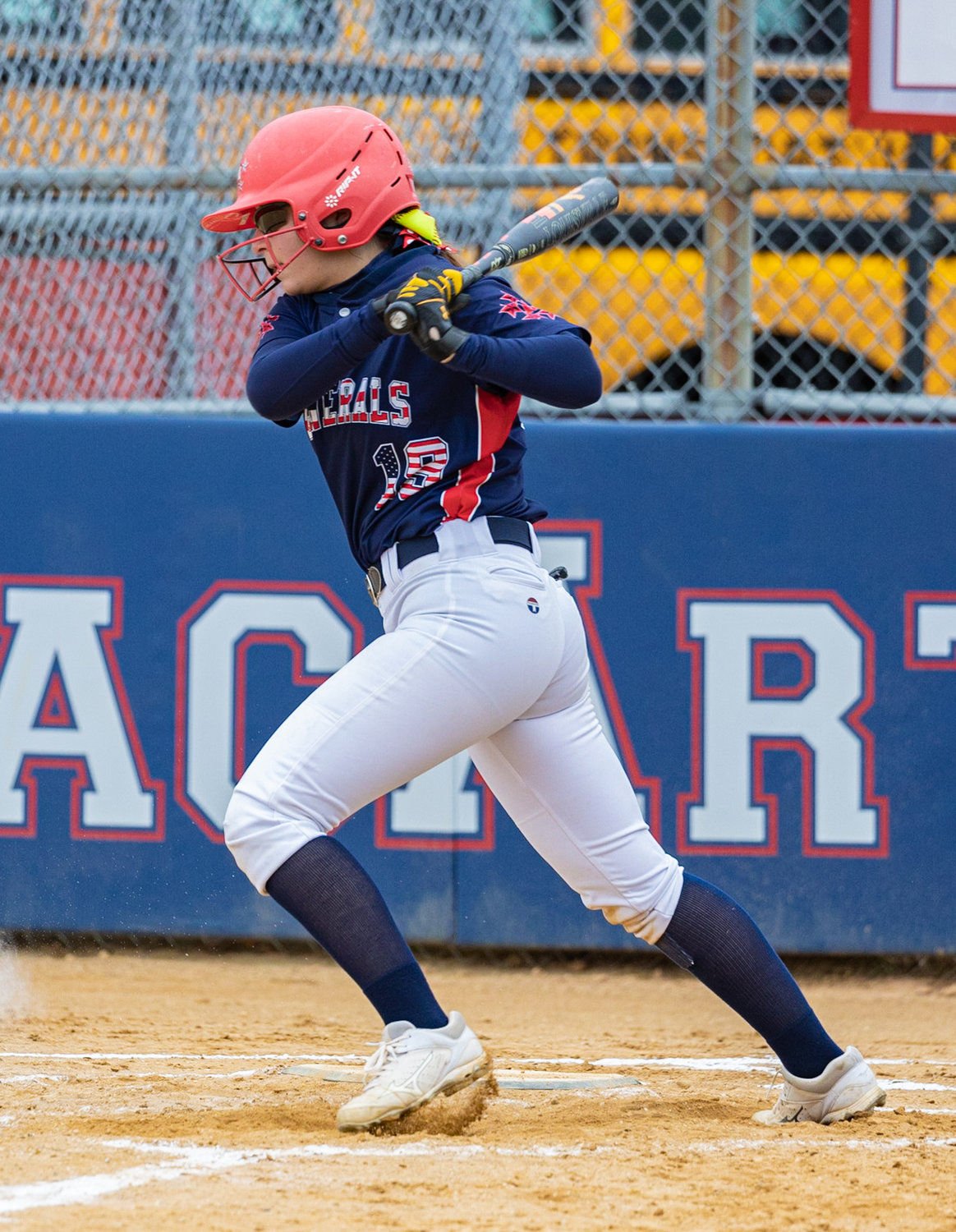 Chiara Nappo entered her senior campaign off a red-hot 2021 season that saw her bat .393 and earn All-County honors.
Karen Millindorf/Herald
By Andrew Coen

A year removed from reaching the county finals amid a grueling regular-season schedule, MacArthur softball is looking to reach the big stage once again under similar conditions.

The Generals competed against larger schools in an ability-based schedule with a 4-10 Conference I record before catching fire in the playoffs against its Class A competition before falling to Mepham in the championship series. The same format is in play this spring with a more experienced team that grew from last year’s challenges, which included a seven-game losing streak to end the regular season.

“They are battle-tested every game,” said 22nd-year MacArthur head coach Bobby Fehrenbach of competing against Class AA schools like Massapequa, Plainview-Old Bethpage JFK and Oceanside. “There are no layups on the schedule.”

Senior Jess Mauro is off to a solid start in her final high school season tossing a two-hitter in MacArthur’s 7-3 win against Oceanside on April 7 and had two hits in a 14-2 win versus East Meadow on April 1. Mauro had a big freshman campaign in 2019 before the 2020 season was wiped out due to the COVID-19 pandemic and Fehrenbach said she is starting to find her” groove” again this spring.

Taylor Brunn is also a key part of the pitching staff and in the lineup. The versatile junior recorded 95 strikeouts as a sophomore and hit .344.

“I have a pretty good problem there,” said Fehrenbach of having two very capable pitchers to turn to. “Both are stepping up.”

Freshman Presley Borne jump-starts the MacArthur offense as the leadoff hitter after first earning the role as an eighth grader. She registered two hits and knocked in two runs during the East Meadow blowout victory that ended in five innings.

Junior shortstop Colette O'Brien, who had four RBIs in an 11-6 win at Calhoun on March 31, adds to the team’s deep lineup. Freshman Hailey Trapani has stepped up in the designated hitter role and produced three hits in the Calhoun triumph.

“We’ve been doing a really good job of hitting the ball so far,” Fehrenbach said. “We are getting productive at bats.”

MacArthur is next in action for a road game at defending Class AA champion Massapequa Wednesday evening at Berner Middle School for a 5 p.m. first pitch. The Generals will then play a four game homestand next week against Long Beach Monday, Carey on Wednesday, Mepham Thursday and versus Catholic power Sacred Heart Saturday, all starting at 10 a.m.

Fehrenbach hopes the challenging schedule prepares MacArthur for the upcoming Class A playoffs where Mepham, Division, Carey, Seaford and Plainedge are all expected to vie for a championship. The Generals have reached the county finals four times in the last six seasons and last captured a title in 2017.